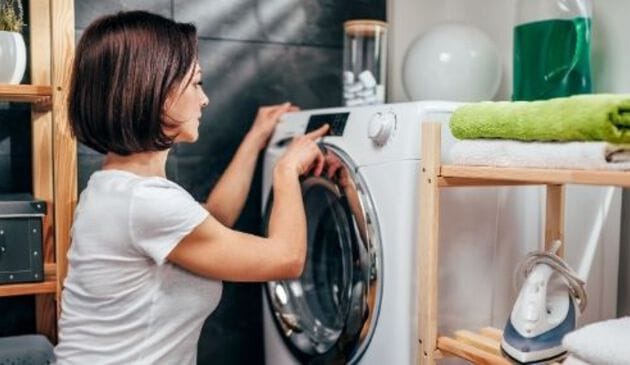 If you’re constantly flinging piles of filthy school uniforms or gym kits into the wash, you’ll want to keep your faithful washing machine in tip top condition. But if you notice a nasty whiff whenever you open the door or find dark residue on your supposedly clean washing, you might need to give your washing machine a bit of TLC.

Mumsnetters regularly start conversations asking why their washing machines smell or are becoming less effective over time. The general consensus is that a build-up of residue or mould inside the machine, around the rubber door seal or in the pipes causes unsavoury smells, although one unfortunate dog owner admitted: “My DDog once put a bit of pork chop in the rubber door seal and that really stank. So check the seals.”

Stray pork chops aside, cleaning washing machines has become a thing in recent years because we now tend to wash at lower temperatures. While this is better for the environment, washing at lower temperatures and with less water makes it harder for washing machines to wash away dirt and bacteria, which can then collect in the rubber door seal or cause limescale to form within the pipes and machinery.

This can ultimately reduce the lifespan of your washing machine and, worryingly, scientists have found germs including staphylococcus, E. coli, hepatitis A, norovirus, rotavirus, and salmonella living in washing machines.

Here are the best washing machine cleaners for 2021. 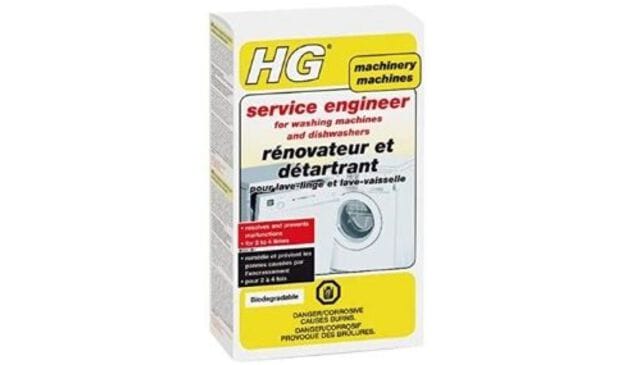 “HG Service Engineer for washing machines and dishwashers is the absolute best stuff.”

HG claims that this clothes washer cleaning powder prevents filters, pipes and the internal mechanics of your washing machine from getting clogged up and stinky, prolonging its lifespan.

Mumsnetters rate HG Service Engineer Wash for achieving real results and it’s certainly the best washing machine cleaner for mould that we’ve found. It’s simple to use – pour the 100g tube either into the central compartment of the detergent drawer or directly into the drum and then run it on a coloured wash at 60°C.

Containing surfactants which capture dirt and antimicrobials and chloromethylisothiazolone to stop bacteria, it also smells lovely and fresh. Although you’ll pay more for a two pack, the price per pack works out similarly to other products on our list. 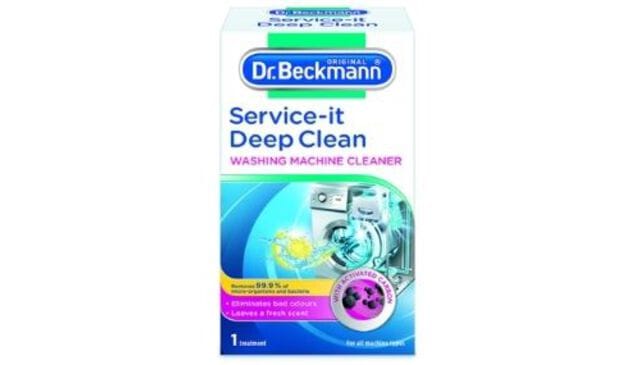 “You need Dr Beckmann washing machine cleaner. Just put it in the drum and run a long empty wash at 90°C. I tried all the soda crystals, vinegar, bio powder on a hot wash etc, but there was a lingering whiff, which suddenly increased in the hot weather. Then I used the Dr Beckmann and it smells completely clean (maybe a slight whiff of dry cleaner shop). Wish I'd used it sooner.”

The main ingredient in this washing machine cleaner is sodium percarbonate – a gentler alternative to chlorine beach – which is still capable of killing microorganisms and mould spores and to sterilise the insides of your washing machine. Zeolites soften the water, and hexcyl cinnamal and limonene add a fragrant scent.

Simple to use, you just pour into the detergent drawer of your washing machine and set it on a hot, empty wash. The manufacturer advises using every two months or every 30 washes, depending on which comes sooner for you. 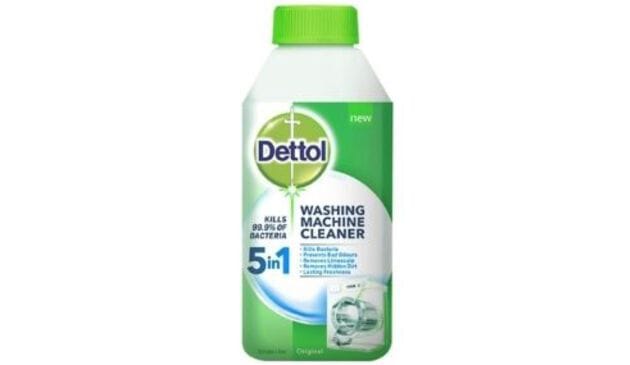 “I occasionally use Dettol Washing Machine Cleaner. It ensures you clean the drawers, drum and seals and leaves it very fresh.”

As you’d expect from a home cleaning staple brand name such as Dettol, it also includes disinfectant. Available in Fresh or Lemon scents, it’s simple to use – just pour a 250ml dose into the detergent drawer and switch on a 60°C without any laundry in the drum. Dettol advises using this liquid washing machine cleaner every two months. 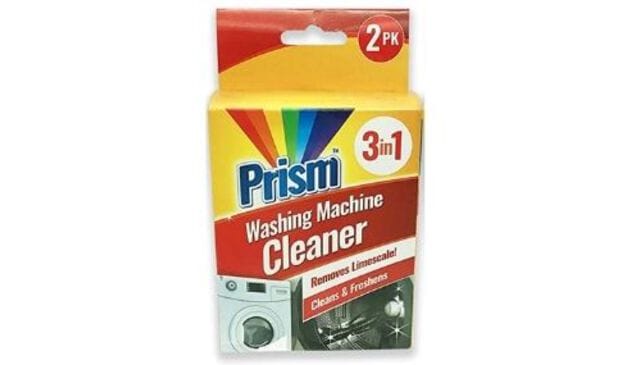 This effective and affordable washing machine cleaner powder can be used at 40°C, but you’ll first have to decipher how to deselect the spin part of the cycle before you start the programme.

The manufacturer recommends using Prism 3-in-1 every month, although it probably depends how often you use your washing machine.

This cleaner for washing machines contains oxygen-based bleaching agents rather than chlorine-based bleach, while thylenediaminetetraacetic acid softens the water and dissolves limescale. Surfactants and enzyme protease get rid of any lurking nasties. 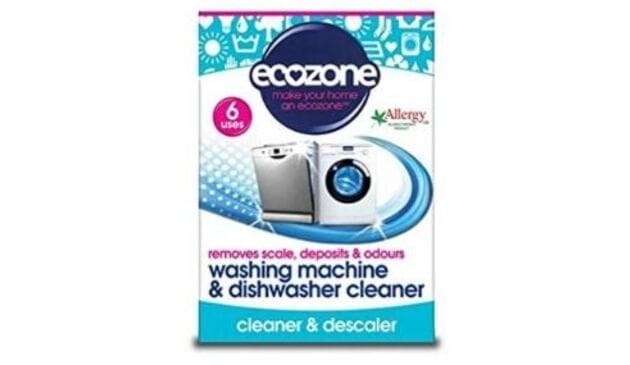 If you’re looking to keep both your washing machine and your dishwasher in tip top condition, it makes sense to use a cleaning product that can service both.

The Ecozone Washing Machine and Dishwasher Cleaner removes limescale and detergent deposits from both washing machines and dishwashers. For a front- and top-loading washing machine, place one tablet into the empty drum and run a hot (60°C plus) cycle without a pre-wash.

To clean your dishwasher, place one tablet onto the bottom of the empty machine and run a hot programme without a pre-rinse.

Animal lovers will be happy to learn that this product is free from animal testing and approved by BUAV under the Humane Household Products Standard. Some reviewers report that it is more effective in a washing machine than in a dishwasher but, at this price, it’s worth giving it a whirl. 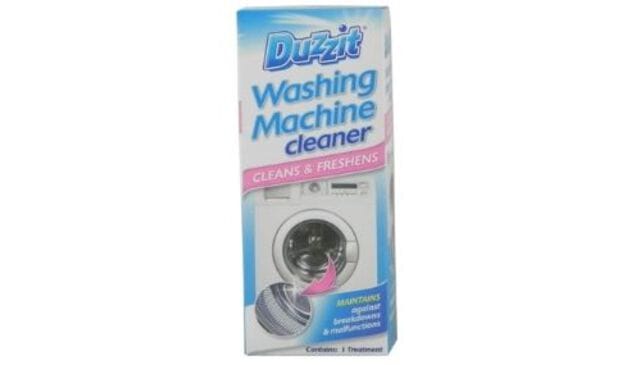 This washing machine cleaner is slightly more complicated than others, in that you have to mix 50ml with four litres of water and soak the detergent drawer in it for 30 minutes. Then pour 200ml into the detergent drawer and run a wash programme at 60°C, ensuring that the drum is empty. At the end of the cycle, wipe the rubber door seal with a damp cloth.

The manufacturer of Duzzit Washing Machine Cleaner advises to use its cleaner every three months. Containing surfactants to blast dirt and antimicrobials and chloromethylisothiazolone to fight bacteria and mould, it will also leave your washing machine smelling lovely and fresh. 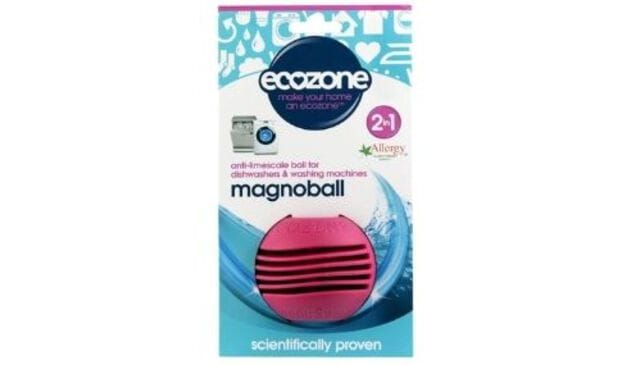 “I have a magnetic ball which prevents limescale. You can use it in the washing machine and in the dishwasher. It lasts five years.”

The second Ecozone product on our list, the Ecozone Magnoball can be used in your washing machine and dishwasher to blast limescale left by the washing process.

Animal testing-free and environmentally-friendly, it’s cost effective too as can be used over and over again in every cycle below 60 degrees for five years. Chemical-free, it’s ideal for anyone with allergies, although it won’t get rid of lingering bacteria and dirt or smells. 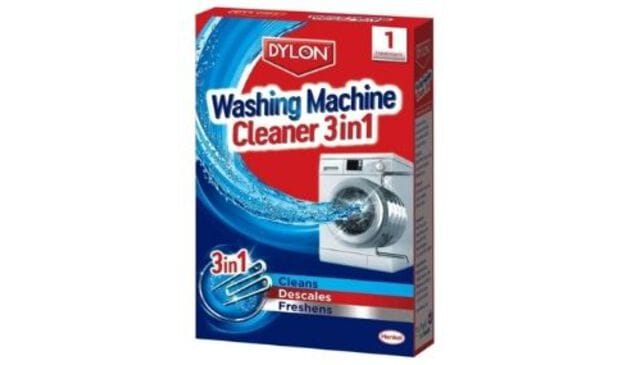 If you’re partial to home-dying your clothes and other fabrics with Dylon washing machine dyes, you may notice that the rubber seal around your washing machine’s door becomes discoloured and clogged with residues.

Dylon Washing Machine Cleaner claims to protect your machine from colour run, as well as tackling bacteria, smells and limescale build up. The pack also contains a treated wipe for you to use to clean your machine’s detergent drawer.

Containing surfactants and benzalkonium chloride to blast nasties, it should leave your washing machine smelling fragrant too.

How do I deep clean my washing machine?

Don’t forget to check your machine’s manual as some washing machines come with their own specific cleaning programme. When you run a service wash, your machine’s drum should be empty.

Are washing machine cleaners worth it?

Wash cycles at 40°C and below can be a breeding ground for bacteria, residue and limescale so it makes sense to tackle these with a washing machine cleaning product.

By regularly washing your machine with a washing machine cleaner, you should reduce the chance of breakdowns and keep it running and washing your clothes effectively for longer, saving you money and hassle in the long run.

How often should you clean your washing machine?

How often you run a service wash depends on how often you use your machine. Generally, you should clean your washing machine every 30 washes or every two or three months – whichever comes soonest. Helpfully, some hi-tech washing machines will even remind you when they need to be cleaned.

What is the best product to clean a washing machine?

Mumsnet has been helping parents make their lives easier since 2000 and, in those years, we’ve seen, tried and reviewed thousands of products.

We work hard to provide honest and independent advice you can trust and we spend hours scouring the Mumsnet forums and online bestseller lists to find products that real parents rate.

Transparency is really important to us and that's why we're always upfront about where we find our recommendations. We write about products that we feel offer the best value to most parents – the ones that our users would recommend to their own friends and family.

Read next: The best dehumidifiers for your home