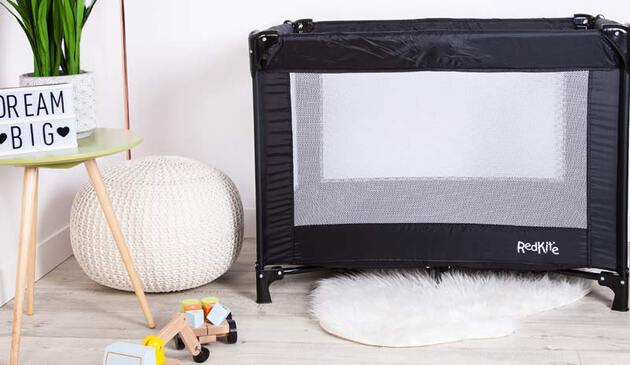 "The Red Kite is brilliant and cheap too."

How safe is the Red Kite Sleeptight?

While this travel cot is one of the cheapest on the market, it certainly doesn’t scrimp on quality.

The Red Kite Sleeptight’s simple design and thoughtful features, including padded rails and mesh side panels, ensures baby is safe at all times.

It is both durable and child-proof with the frame and corners covered well by fabric. There are also no zips or choking hazards, and no gaps where a child’s fingers could become trapped.

Red Kite's Sleeptight is fire retardant and there is a locking system on each side of the frame which means that the travel cot is sturdy when upright. The frame cannot be released until the buttons are pressed, which requires a good amount of pressure – more than any small child could manage.

The cot is a bit wider than other cots on the market, such as the Joie Kubbie Sleep and the SpaceCot, so there is plenty of room inside for a child up until they are three years old – or until they can climb out.

As with the other cots on test, our tester, Ruth's, 18-month-old put the Sleeptight through its paces to ensure it did not topple over or become easily damaged over time – he rolled around inside it, bounced up and down with gusto, and his older siblings also tugged at (and pushed against) the sides from the outside. It passed our tests with flying colours.

How easy is the Red Kite Sleeptight to assemble?

The Sleeptight uses a standard cot mechanism for assembly. The sides of the frame are each pulled up and locked, and the centre of the travel cot is pushed down flat before the mattress is put in place.

There is an instruction manual included with the cot although Ruth found she didn’t need to use it. The manual can also be downloaded from the Red Kite website and it is well illustrated with diagrams and text.

Its simplicity means it is very easy to set up and put down. Ruth assembled the cot in less than a minute as it came in two easy parts – the cot itself and the mattress.

The same level of assembly is needed every time and it is just as quick and easy to fold down. The frame is released by pushing the buttons, the centre comes up and the mattress wraps around the collapsed cot so it can be placed inside the carry case.

Although the Sleeptight is wider than other cots we tested and has no wheels for transportation around the house, it’s 8kg weight still makes it easy to carry around.

The fabric is made mostly of cotton and is black in colour with white, breathable mesh that makes it easy for parent and baby to see in and out. The material also comes in Blueberry, Raspberry and Grey if you’d prefer a lighter colour.

While it does sit at the lower end of the price range, its sleek design and well-finished detailing still gives the likes of the BabyBjorn Easy Go and Joie Kubbie Sleep a run for their money.

It's wide frame may make placing it in a smaller room a bit tricky, but the up side of this is that is there is more space for your child to grow.

The white mesh creates a pleasant contrast with the classic black exterior so it doesn’t feel dark and oppressive at all – Ruth liked being able to see her son easily through the mesh too. 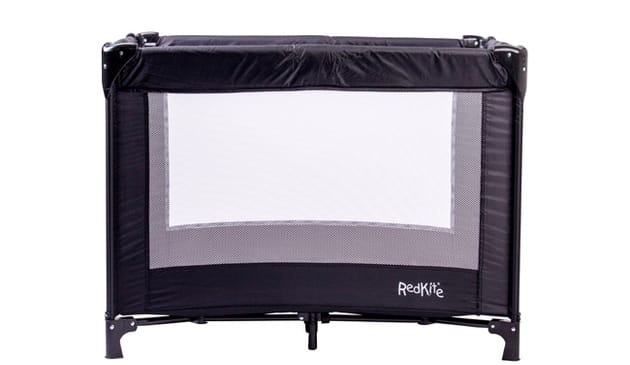 This is definitely a cot that can be used as a place to nap if you are away on a family holiday or at a grandparent’s house.

Ruth's son slept in the Sleeptight when she went away with her family for the weekend and, although it was difficult finding a spot in the small hotel room, she managed to put it at the foot of the bed.

It is a bit bulky to move around when set up so would need to be collapsed to fit through most doorways. But it would take less than a minute to set it up again elsewhere.

When it’s folded down, it’s compact and goes into a black carry case which makes it easy to transport and to store. It would slot nicely into a cupboard or in the boot of the car, although it may be too large to take onto a plane as hand luggage.

It’s also spacious enough when assembled to be used as a playpen for a younger child as they would have room to play with toys and move around.

The main thing that could be better is the mattress which feels a bit too thin (you may have to buy an additional), although Ruth's child had no trouble sleeping on it.

Unfortunately the covers aren’t removable and the mattress doesn’t come with a sheet so everything needs to be spot cleaned with mild detergent and warm water before left to air dry.

Ruth placed her son in the cot with peanut butter on his finger which he smeared all over the top of the frame. She found it much easier to clean if she got to the muck quickly with a damp cloth (rather than leaving it to stain), and the fact that the cot is predominately black meant that any dirt didn't show up much, even if cleaning didn't remove it entirely. The metal legs can also be cleaned with damp cloth.

However, she found cleaning the white mesh a lot trickier as dirt did become ingrained into the fabric. As such, the mesh could start to look fairly mucky over time, especially if the travel cot is used as a playpen as well as somewhere for baby to sleep.

"We bought an extra foldable mattress, which makes it comfier, as we do a fair few weekends away. DS is too big for the cot now, but we still use the mattress with the base from the travel cot when we go away."

It may be our budget choice, but the Red Kite Sleeptight works just as well as the more expensive travel cots we tested.

While it is fairly no frills in terms of overall aesthetic and the covers aren't machine-washable, it offers good longevity and, in our opinion, great value for money.

If you need a travel cot for short trips, or as a secondary cot for a grandparent’s home, then the Red Kite Sleeptight is perfect for this.

It's robust, quick and easy to assemble and provides a comfortable and safe environment for both sleep and play.

Out of all the cots we tested this one impressed us the most because there was no compromise on quality despite the low cost. This is why we awarded it Mumsnet Best Budget Travel Cot 2019.

For more information about what to look for when buying a travel cot, check out our buyer's guide.