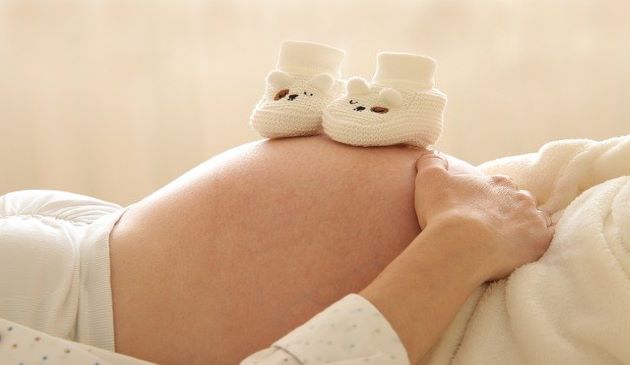 If you’re pregnant and looking for natural pain relief when you’re in labour, a maternity TENS machine is a good place to start. It’s usually most effective during the early stages of labour or if you’re planning a home birth.

Some hospitals have TENS machines available in the labour ward, but many women prefer to have their own as it can also be used at home during the late stages of pregnancy.

What is a TENS machine?

A TENS machine is a popular method of drug-free pain relief and is usually most effective during the early stages of labour. TENS stands for transcutaneous electrical nerve stimulation as the machine gives you safe amounts of electric signals to treat pain through pads that stick to your back. The current stimulates your body to produce more endorphins, which are natural painkillers. The more endorphins produced, the less pain you feel.

To find out more about how TENS work in general, the NHS has a useful guide about using a TENS machine during labour. You should make sure the machine you’ve chosen is designed for maternity and we strongly recommend talking to your midwife or healthcare provider before using one.

Why use a TENS machine during labour?

A TENS machine is a popular choice for the early stages of labour and some find using it with gas and air is enough to cope with contractions. You decide what level of current you need so you’re in complete control.

A survey carried out by Which? found that seven out of 10 women said using a machine relieved labour pain. Mumsnet users also recommend that, if possible, you try a machine before you decide which one to buy or borrow, but this shouldn’t be before the 37th week of pregnancy. Not all machines suit everyone so having a go and getting the settings correctly adjusted before you need it is the best way to ensure it’ll work for you when you’re actually in labour.

The majority of our recommendations came from parents on the Mumsnet forums. We also visited health sites, including the NHS, to check safety, and consulted consumer review sites to further round out our research.

Here’s what some Mumsnet users had to say about using TENS machines during labour:

“I used it during early labour and continued with it at the birthing centre too. The batteries lasted well, it definitely helped and was nice and portable. The pads are fairly cheap to replace as well so could use it again or sell it on afterwards.” Roxyxoxo

Here are the best TENS machines for labour. 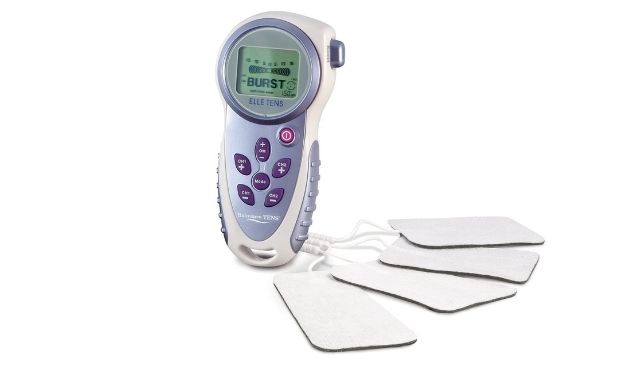 “Got me through the first 36 hours of labour until transition. Saved a lot of pain (I tried a contraction without it) and made a big difference. I would say it cuts off the ends of the contractions so the pain is less intense and shorter”. Iamnotacerealkiller

The Babycare TENS Elle has been designed with mums-to-be in mind. It’s quick to set up, which is what you need when you’re preparing to give birth, and it comes with a carrying pouch and neck cord as well as a guide to drug-free pain relief.

Key features of this machine include two preset modes which have burst and boost functions, and Opti-Max technology which gives an extra pulse of power when you need it most. It also has four large pads so you can easily target the current to specific areas.

If you don't want to fork out for a machine of your own, you can hire one. Hiring a TENS machine is a cheaper option than buying and means you can send it back to be used by someone else once you’ve finished with it.

It may be worth asking your midwife whether there are any places local to you that hire out machines or you can hire a machine from Birth-Ease via Amazon. Your TENS machine will be dispatched immediately when you’re 36 weeks so they don’t recommend that you order before then (Birth-Ease also don’t accept pre-orders).

You get free delivery and return, and the machine comes with new batteries and electrode pads with every hire so you don’t need to worry about the batteries being flat. There’s a thorough cleaning process in place so you can be sure your machine will be clean when it arrives. 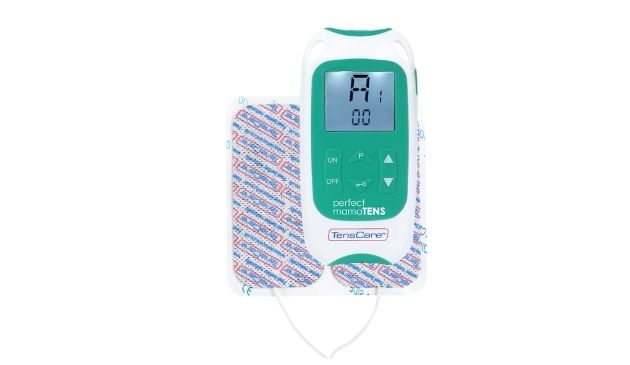 This lightweight machine is ideal if you’re looking for something that’s low cost and no frills.

Key features include simple and easy-to-use controls with three preset programmes to help you keep control at every stage. When the pain gets more intense, the integral boost button gives you extra relief. There are 60 intensity levels to let you gently increase the stimulation so that you get the right amount of relief during each stage of labour. The backlit screen means it can be used in dimmed light if you labour through the night.

If there’s a circuit connection break (if the pads come off your skin), the safety feature returns the intensity to ‘0.’ Large pads give you maximum coverage and the backlit screen means you can use it in the dark. Plus, it can be used post-labour to manage any lingering pain. 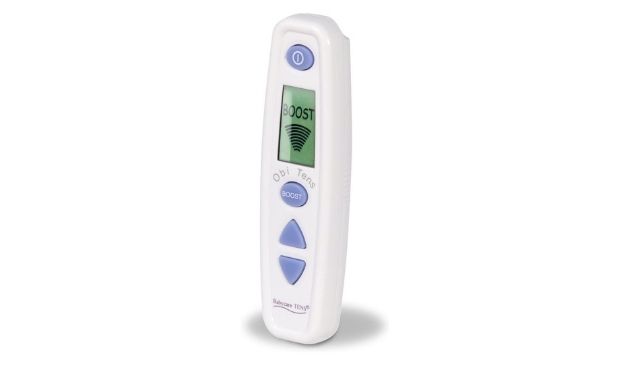 The Obi TENS machine is simple but versatile. All of the settings are preset so you don’t need to worry about lots of instructions or programming before you start. The integrated booster button, as the name suggests, gives you a boost of power to use at the start of a contraction.

As with all labour TENS machines, the Obi TENS can be used with other forms of pain relief such as gas and air.

The machine has four large pads, and is easy to carry around with a neck cord and pouch. It can also be used for post-labour pain. 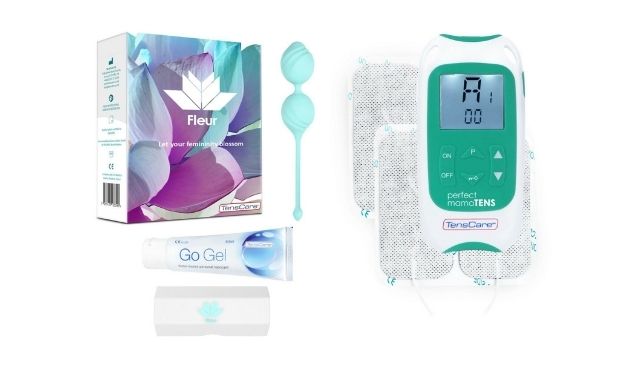 The Perfect mamaTENS + Fleur offers great versatility. It provides pain relief during labour and can also be used afterwards to ease postnatal pains as well as helping tone your pelvic floor muscles after birth. This is done using the Fleur pelvic floor toning balls which stimulate the muscles to contract.

The kit includes everything you need to get started quickly including batteries, gel, pads and a storage pouch, and is the ideal choice if you want to be able to use your TENS machine for more than just labour. 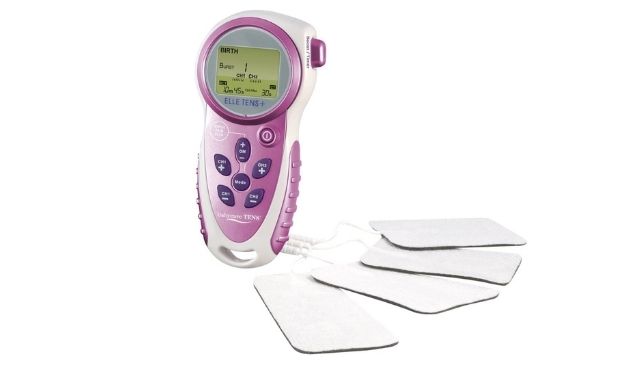 This 3-in-1 product is the ultimate maternity TENS machine for labour and beyond. It has all the usual features of a TENS machine, as well as a contraction timer to help you know what stage of labour you’re at.

The machine can also be used for general pain relief after birth and has a post-birth pelvic floor toner.

The two preset modes make it easy to use and the boost button helps you to manage particularly painful contractions. 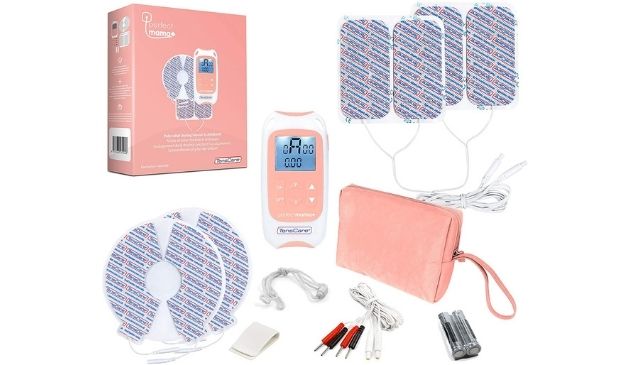 “I loved my TENS machine. It really helped with labour until I got into the birth pool. I would definitely use it again.” Odile13

The TensCare Perfect Mama+ is an award-winning TENS machine with three programmes for differing levels of pain control, as well as a boost button for extra help during contractions. A labour log and contraction timer helps you to measure the length and time between contractions.

The Perfect Mama+ can be used after childbirth to combat any pain and it also comes with breast electrodes which can help to initiate lactation. It offers a lot for the price and it’s easy to see why it has been rated highly by many parents.

7. Best TENS machine for postnatal use: Med-Fit Mums To Be 4-in-1 TENS 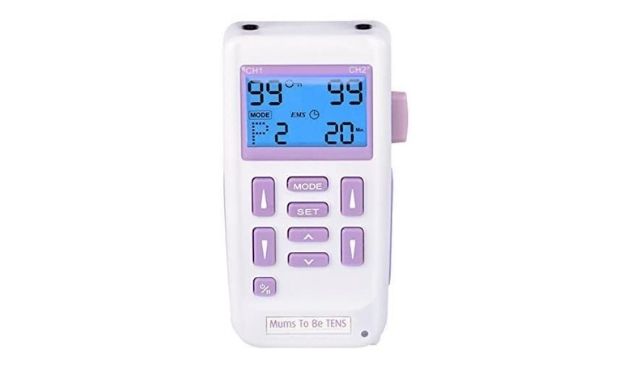 This easy-to-use machine has 12 preset programmes. There’s also a boost button to give extra relief when you feel a contraction coming, which increases the intensity, pulse rate, pulse width and pulse frequency.

The machine can also be used to aid your recovery post-birth with modes to help strengthen and tone your pelvic floor, tummy and thighs.

In the box you’ll find a comprehensive instruction guide and the machine is portable using the accompanying carry pouch.

Buy now from Amazon
Related: What to pack in your hospital bag for labour

How does a TENS machine work?

Maternity TENS machines have four large pads which stick to your back to provide targeted pain relief through small electrical impulses. Most machines have preset programmes so you don’t need to spend much time setting them up.

How do I choose a TENS machine?

It depends on the type of pain relief you’re looking for. Some TENS machines are just for providing pain relief during the late stages of pregnancy and early labour. Others can be used after labour too for residual pain and some machines come with attachments which can provide targeted postnatal care to help with things like pelvic floor strengthening.

The main things to look out for are:

You should also check that it’s an approved maternity machine. If you can, try one out before you decide which model is best for you.

How often should I use a TENS machine?

The beauty of TENS machines is that you control the amount and frequency of the pain relief so you can use it as much or as little as you need to during labour.

Can a TENS machine be harmful?

No, there are no known side effects of using a maternity TENS machine during labour, but you shouldn’t use one until at least the 37th week of pregnancy.

How much does a good TENS unit cost?

You can pick up a good TENS machine for less than £40. Or if you’re wanting one that will help during the first few months after labour, you can spend up to £100.

If you don’t want to buy one, you can hire machines for six or seven weeks. The advantage of this is that it’s lower in cost (usually around £30) and there’s normally free delivery and collection of the unit included. It can then be used by someone else once you’ve finished with it.

What is the best TENS machine?

The Babycare TENS Elle offers a lot for the price and is the best TENS machine as recommended by mums. It gives you help with pain during and after labour and the breast pads can help give you a boost with lactation too. The contraction timer and log help you keep in control and know how things are progressing.

We work hard to provide unbiased, independent advice you can trust. We do sometimes earn revenue through affiliate (click-to-buy) links in our articles. This helps us fund more helpful reviews like this one.

Summer recipes and BBQ inspiration for the whole family