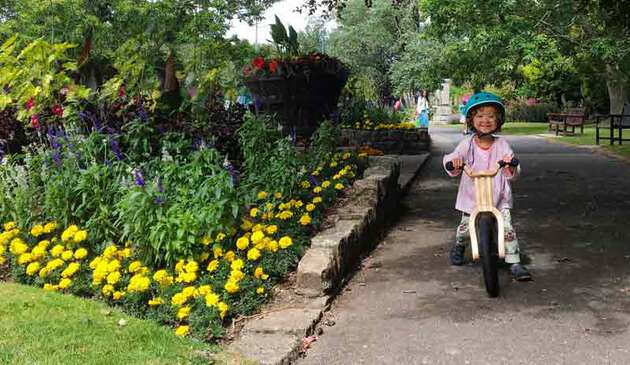 When it comes to balance bikes, the idea is for toddlers and preschoolers to learn to balance while propelling themselves forward so that, when it’s time to get on a pedal bike, they’re pretty much ready to go.

With so many balance bikes now on the market, working out which one to go for can be a bit of a head-scratcher. A lot will depend on your child’s size and development, where they’re likely to cycle and how much you’re willing to spend.

To help you weigh up the options, we commissioned Adele Jarrett-Kerr, a journalist, blogger and ardent advocate for getting children outdoors, to research, test and write about balance bikes.

Adele is a mother of three whose older children learned to ride bicycles through intensive practice on pedal bikes, supported by their back-strained parents.

Eager to try out a different method with her two-and-half-year-old so that she'd be cycling with the rest of the family sooner rather than later, Adele took on the task of finding the best balance bikes with gusto.

Who tested the balance bikes?

For continuity, we think it’s best to get one tester to use all the models. This means that our results are based on like-for-like comparisons and potential variables reduced.

Adele and her toddler put 13 balance bikes through their paces on different terrain and under a variety of conditions. They live in the countryside in Cornwall with access to cycle trails, wheel-friendly parks and town pavements.

Where the bike's size allowed, her five-year-old also rode it to see how well it performed at the higher end of the age spectrum.

We spoke to parents on the Mumsnet forums as well as offline, noting the names that proved popular and the varied experiences parents reported.

We also approached expert Victoria Hazael of Cycling UK, a charity devoted to helping people of all ages, backgrounds and abilities get into cycling. She has researched balance bikes extensively for Cycling UK and, in recent years, her own children have made their way through the balance bike phase. We asked her what we should be looking for when buying a balance bike, what to avoid and what brands she would recommend.

After 12 hours of research, we compiled a longlist of 35 balance bikes to put to the test, eventually narrowing it down to a shortlist of 13. The final list included bikes with wooden, aluminium and steel frames, and either pneumatic wheels or wheels made of EVA foam.

Here are the balance bikes we tested

How were the balance bikes scored?

We developed a series of tests to cut through the marketing jargon and work out how each bike performed for real families relatively new to the balance bike concept.

The aim was to find bikes that would suit most families, particularly those just getting started, so our pool of balance bikes were scored based on how well they performed straight out of the packaging with the focus on ease of use and quality of design.

Each balance bike was tested for 120 minutes spread across multiple sessions. Our top five balance bikes became firm favourites with our toddler and eventually exceeded the time prescribed for testing.

Buying a balance bike can be a big investment for families, mainly when it comes to time, money and space. Getting it right be the difference between giving your child a positive first introduction to cycling and acquiring a piece of kit that resides permanently in your front porch, never or rarely making its way outdoors.

So we wanted to find products that were able to withstand the rigours of everyday family life while also providing a positive cycling experience for those just getting started.

How did you test for safety and stability?

All of the products we tested passed British safety standards, but we asked Adele to score each one based on her own impressions of the bike’s performance and safety features.

Did it come with a brake? If so, how easy was it for a child to use? Were there any additional features in place, such as rounded bolts or steering limiters? How comfortable did her toddler appear when sat on the seat? And did the seat dip or 'scoop' to support a small rider?

Adele tested the brake herself with her little finger and also took a frank look at the bike's design and geometry to see whether it was tricky to operate.

To test for durability and stability, she threw each product on a hard outdoor surface and noted any wear and tear as a direct result.

How did you test for assembly?

We also looked at how easy it was to adjust both the handlebars and the seat to ensure that each bike was the right size for our toddler. Were micro-adjustments available to get a truly custom fit? 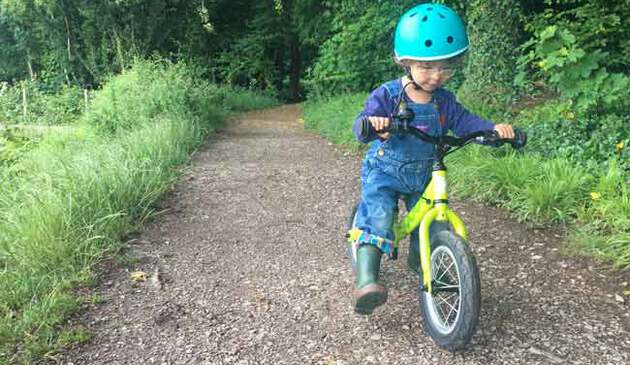 How did you test for ease of use?

Weight is vital when it comes to balance bikes and the smallest of grams can make a huge difference to a toddler.

So, while we looked for bikes that adjusted well for size, we also carefully considered how much they weighed and whether they represented a significant proportion of our mini tester's bodyweight. If so, was it easy for her to pick up and just how heavy would it be for a parent to carry too?

Taking each balance bike outside for test runs in various locations also allowed Adele to assess how responsive the wheels and steering were both on and off-road, and how easily the brakes activated. She also compared how quickly her child tired while riding each bike.

How did you test for cleaning?

Balance bikes can be magnets for dirt and mud depending on where you plan to take them. Using a damp cloth, we tested how easily each bike could be cleaned and how easily the wheels and frame showed up dirt.

All the balance bikes we tested were taken through a muddy track in the woods.

We wanted to find products that appealed to both adults and children, so we checked whether a range of colours and patterns were available for each model and how Adele and her child felt about the bike’s appearance.

Function trumps looks when it comes to balance bikes though and, according to our expert Victoria, many balance bikes on the market feature prints meant to entice children while masking fundamental design flaws.

While aesthetics are important, always consider the fundamentals of safety and use first.

We tested balance bikes across a broad price range, starting at £20 and heading towards the £200 mark. Our standardised scoring system allowed us to easily spot the differences between cheaper and more expensive models to determine whether better function justified a higher price tag.

Adele noted how satisfied she felt with the product when compared to its retail price and how likely she felt the bike would stay in good enough nick to be handed down to another child.

She also considered the bike's age span, if spare parts could be sourced and how well it would hold its resale value on the second-hand market.

How did you choose the five best balance bikes?

Adele noted how satisfied she felt with the products overall and scored each bike on the same criteria – safety elements and stability, assembly, day-to-day usage, cleanliness and hygiene, aesthetics, and value for money.

She also considered which balance bikes were likely to suit most toddlers (and parents) new to balance bike riding before giving an overall score.

These results were then used to choose the five best balance bikes for most parents.

Mumsnet has been making parents’ lives easier since 2000 and, in those years, we’ve seen, tried and reviewed countless products. We’ve watched trends come and go and safety features become more and more slick. Our testing is best in class – we rigorously test each product with real children in real-life situations as well as standardised lab-style testing and we're confident that our testing leaves no stone unturned. This means that parents don’t need to compare reviews or hunt around for other opinions. They know Mumsnet has it covered.

All Mumsnet product reviews are written by real parents after weeks of research and testing. We work hard to provide honest and independent advice you can trust – brands can’t pay to win a Mumsnet Best award.

The aim of Mumsnet Reviews is to produce the best product reviews on the market for parent and baby products. We do sometimes earn revenue through affiliate (click-to-buy) links in our articles. However, we never allow this to influence our coverage.