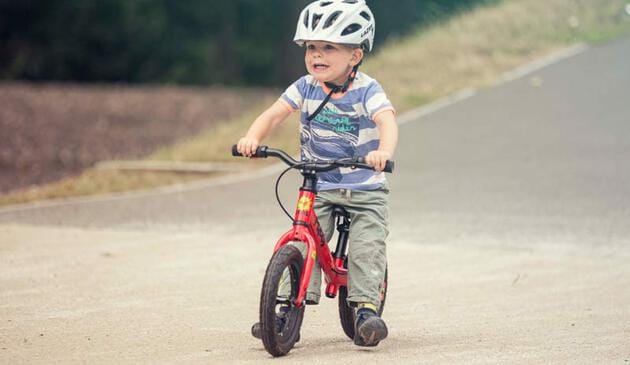 This bike operates beautifully. I’d be happy to take an adult version of it out cycling alongside my daughter.

How easy is the Frog Bikes Tadpole to ride?

The Frog Tadpole takes the components of a trail-worthy mountain bike and scales them down to toddler size for easy riding. High quality features made specifically for the littlest of riders allow them to confidently take on bumpy surfaces.

However, this bike is the heaviest in our best balance bikes list. At 4.17kg, it could represent 33 percent of your young two-year-old’s body weight which could suggest that, unless your child is a bit bigger for their age or particularly keen to get on two wheels, this bike may be better suited to a two-and-a-half or three-year-old to start with.

This shouldn't put potential buyers off though, considering what the design is able to achieve at that weight. The Tadpole's large tyres are ideally designed to manage rough terrain, effectively cushioning any bumps, and its long wheelbase makes learning to balance incredibly easy. Off road bikes need to be strong and there’s no doubt that the Frog’s sturdy frame can take just about anything you throw at it.

Plus, it's nowhere near as heavy as other bikes of a similar design, with most hitting over 5kg – tricky for most younger toddlers to ride and adults to carry. The Puky LR1 (5.2kg), for example, steered and rolled smoothly during testing, but it was far too heavy for our tester, Adele's, two-year-old daughter to ride properly.

In fact, by omitting a footrest, a key feature of the Puky, Frog Bikes have consciously avoided adding weight to the Tadpole's design.

Also, by including a bell and reflectors as safety measures rather than fun accessories, Frog sends the clear message that they mean owners to understand that this is a serious bike, up to the task of taking on challenging cycle trails as a family.

That said, they advise against children riding at dawn, dusk or night so the reflectors seem to have more of an aesthetic purpose than anything else. The bell, on the other hand, allows young riders to get used to the concept of alerting those around them long before they’ll need it.

Our two-year-old tester was approaching three when she tried this bike and she took to it straight away, pelting across her local park. Whether over grass, at the skatepark, on the pavement or on the dirt track, she found no trouble getting up to speed on the Frog Tadpole.

She found the handbrake a bit stiff at first but, with practice, she was able to get it working and found it highly effective. This might present an issue for younger toddlers but certainly shouldn’t be a problem by the time your child is closer to three years of age, which is when they’re more likely to grasp how to use a handbrake and acquire the speed at which it becomes desirable.

The wide handlebar allowed her to easily master the bike's responsive steering – it appeared well-proportioned to her shoulders, increasing the bike’s stability – and the seat was positioned closely to the rear wheel.

The steering limiter, which couldn't be removed, gave our mini tester a broad range of movement with no need to pick up the bike as she would have if it couldn’t easily be turned. Meanwhile, rounded bolts prevented scraping when she dropped the bike (as balance bike learners tend to do, at least in the beginning). 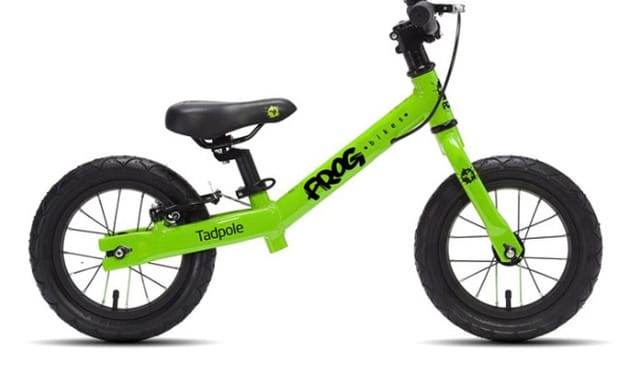 The Frog Tadpole is a grab-and-go option with no assembly needed. Straight out of the box, you just turn the handlebar and secure it in place.

A full set of tools is included in the box in case you need to do any maintenance, but most parents would probably be best off taking the bike into a shop for more technical adjustments, such as raising the height of the handlebar.

The manual, also available as a PDF online, is fairly text-heavy, but it’s an accessible read which covers everything from bicycle maintenance to respecting wildlife. There’s a five-year warranty on the frame and fork and spare parts are also available to buy.

One of the Tadpole’s strengths is that it can be adjusted without any tools when out and about.

The quick-release adjuster allows you to lift or lower the saddle to suit your child’s inseam. However, Adele found it quite stiff to operate and felt the removable back reflector got in the way.

The saddle height can also only be adjusted by a few centimetres so the bike’s age range potential may be shorter than expected.

This balance bike is built for comfort with a generously-padded saddle which dips to help small riders stay put. The handles are wonderfully grippy and slender for little hands, and they’re also surprisingly soft and flexible.

The bike’s excellent geometry meant our toddler sat at an ideal angle for leaning and scooting. 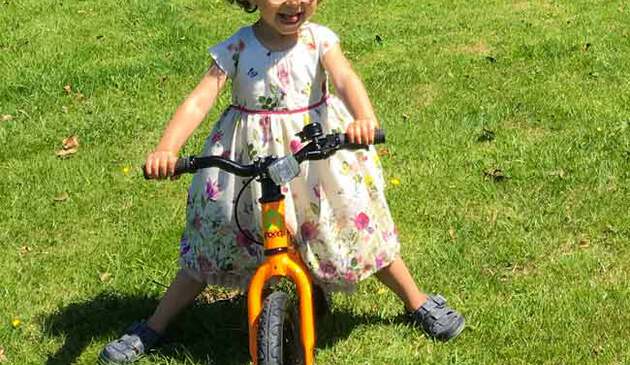 The Tadpole maintains a classic mountain bike aesthetic, made fun for toddlers with attractive patterns on the hand grips and tyres.

It also comes in a range of bright colours to give your child lots of choice – from solid bright orange, which we tested and our toddler loved, to pink florals.

Deep colours and dark wheels meant that dirt didn't show up too much during testing, which is helpful as this is a bike you’d probably take beyond the pavement and the park. If dirt did show, it was easily wiped off with a damp cloth. There was also no wear or tear after extended use.

Manageable to carry and not at all daunting for a toddler to operate, the Tadpole is a breeze to use on a daily basis. That said, it’s heavy enough that you wouldn’t want to carry much else alongside it – and certainly not your toddler.

As one of the bigger, slightly bulkier balance bikes we tested, it does take up a a fair bit of room when stored, but the wide range of movement on the steering limiter still allowed it to be stored away easily in the front porch and the car boot.

We had a Frog Tadpole Mini and now a Frog Tadpole, and both have been great. We’re almost ready for the next size up with pedals.

A top scorer in almost every area, the Frog Bikes Tadpole is a sturdy bike built for easy balance and speed which it tempers with an exceptional braking system.

While it was one of the more expensive bikes we tested, the high quality of its components justifies the price. It’s certainly worth considering if you're a cycling family ready to take on some trails.

Like the Islabikes Rothan, the Tadpole's age range is very specific, which could be limiting in terms of how much time you get out of it. But, as with its competitor, this means the bike is customised to give your child an enjoyable first taste of cycling.

First impressions matter here. This means you’ll want to get the sizing right and we expect that three-year-olds or taller two-year-olds will get the most out of the Frog Tadpole considering its height and weight.

Frog Bikes is a hugely popular brand and, if needed, you can expect the Tadpole to stay in good enough nick for resale.

All Mumsnet product reviews are written by real parents after weeks of research and testing – this includes recommendations from the Mumsnet Talk forums. We work hard to provide honest and independent advice you can trust. Sometimes, we earn revenue through affiliate (click-to-buy) links in our articles. However, we never allow this to influence our coverage. Read our how we test page to find out more.