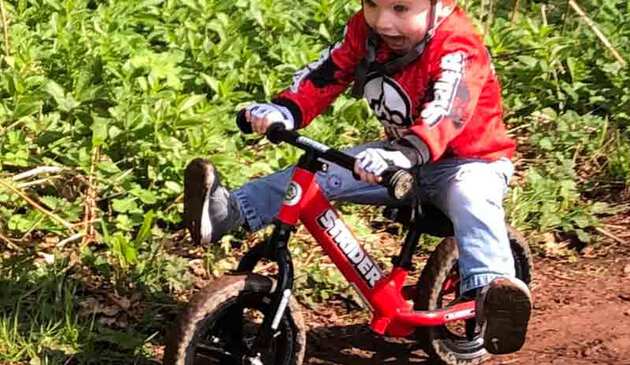 My son had a Strider bike and it was fantastic. We bought it second-hand and then sold it again once he had finished with it.

How easy is the Strider 12 Sport to ride?

Deceptively simple in design, the Strider 12 Sport balance bike scores highly as one of the lightest balance bikes on the market with just about everything your child needs to hit the pavement.

The bike’s supreme lightness and thoughtful design are where it wins, allowing even the smallest of toddlers to quickly get to grips with zooming around – particularly as very young riders start off picking the bike up before they get used to turning.

Its geometry, brilliantly designed for balancing and coasting, makes it a far more functional ride than other bikes of a similar weight, such as the 2.7kg Chicco Red Bullet. At the same time, it’s much lighter than other similarly-priced bikes such as the 3.9kg Hoy Napier 2020.

It sports puncture-proof foam tyres that won’t need any maintenance, which makes it a great option for parents who aren’t confident cyclists themselves.

While foam tyres often get flack for not being grippy enough to smoothly take on every type of terrain, the Strider has good traction for a bike with foam tyres and performs well in most settings your toddler is likely to be riding.

It’s worth bearing in mind that there isn’t a brake, an intentional decision on Strider’s part. Their reasoning is that they’re teaching kids as young as 18 months to ride bikes and that learning stop the bike by putting feet down is safer and simpler at first since it helps them to more confidently control their movement and speed.

You can, however, add a footbrake to the bike when you feel your child is ready to operate one, although we didn’t test this.

There also isn’t a steering limiter so the handlebars can fully revolve. Again, this is an active choice on Strider’s part as they feel it’s safer for children to learn how to control their steering right from the get-go.

Our tester, Adele's, two-year-old daughter had no problem navigating this feature and soon handled the steering with ease thanks to the bike's extraordinarily narrow hand grips that are well-designed for little hands.

The Strider 12 Sport’s frame-integrated footrest, positioned below the seat, is also an enjoyable feature, especially once toddlers gain control and learn to gather speed. It gives them the option of putting their feet somewhere rather than spreading them out when balancing and, later on, it can be used for attempting tricks.

Your child is likely to achieve balance quickly as the Strider boasts a long wheelbase, a seat close to the back wheel on its lowest setting and a well-inclined fork – all brilliant for stability. 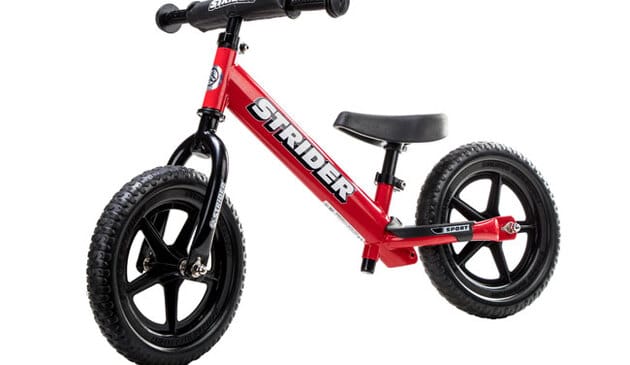 Unlike the other balance bikes that made our top five (which all came pre-assembled), the Strider does require some assembly. However, this is fairly simple and requires no tools – you slide two parts into a hole and tighten a clamp by pulling the lever closed.

Although there are a few steps to follow, the visual instructions that accompany the written are clear and detailed enough to allow parents to put the bike together in just 15 minutes. Adele was initially intimidated by having to put all the parts together herself, but found assembly neither fiddly nor confusing.

Encouragingly, the owner’s manual is also available online as well as videos with instructions on how to assemble the bike.

With a two-year warranty against manufacturer defects, the bike is well covered for the time a child is likely to use it. The Strider is a sturdy bike so we envision that you’d get a good few years out of it before being able sell it on in good nick.

The Strider 12 Sport is beautifully adjustable. The quick-release adjusters on the seat and handlebar make this bike a very attractive option for parents – especially because you won’t need to go out and about with a toolkit in your bag.

These adjusters also makes the bike easy to share between siblings, especially as the long seatpost (included in the box) reaches 48cm. Adele needed to replace the seat with the longer stem, but an allen key was supplied in the box for her to be able to do this.

Though the small frame isn’t an ideal size for older children, it is possible for kids as old as five to ride it.

The foam tyres don’t provide cushioning though so the Strider Sport isn’t as smooth to ride over uneven or rough terrain. Adele's daughter preferred not to ride it whenever going over grass or gravel, but she found it light and easy to zip around on when riding on the pavement.

With the Strider logo down the side, the bike has a definite racer aesthetic. Strider jersey tops, gloves, knee pads and elbow pads complete the look, but these must be purchased separately.

There are also lots of options for customising the bike itself. It comes in deep colours and has black wheels and spokes that don't show up much dirt. It can just as easily be wiped down with a damp cloth if needed. We tested the red Strider, which our toddler tester loved. 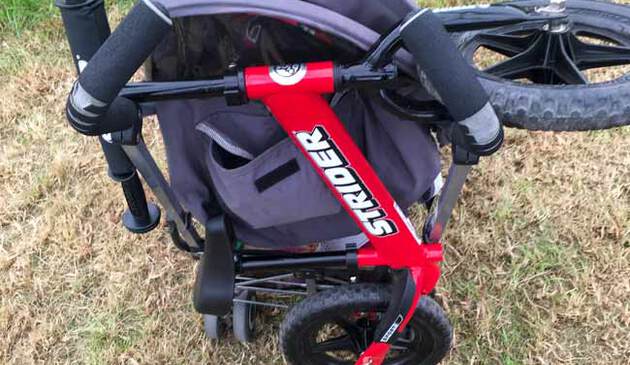 The Strider 12 Sport is one of the lightest balance bikes on the market at a stunning 2.9kg, which potentially represents 24 per cent of your two-year-old’s bodyweight.

Its weight encourages toddlers to go further and faster as they’re unlikely to tire quickly, which makes for more than just a fun ride. It’ll become a genuine means of transport as they grow in cycling competence, allowing them to cover more distance than they would at walking pace. That’s particularly good news for the school or nursery run.

As with all the balance bikes we tested, the Strider was tried out on paved surfaces, at a skate park and on a cycle trail. It was even taken on a seven-hour outing, which really allowed our mini tester to put it through its paces.

The Strider’s weight also makes it easy for both toddlers and parents to carry, which is especially useful when you’re balancing lots of other things while on the go. Adele found it easy to carry alongside her two-year-old and sometimes hooked it onto her lightweight buggy too.

Without a steering limiter, she was also able to fit the Strider into compact spaces – its small size made it unproblematic to throw into her car boot or front porch, especially when she had other bikes to store.

As a ride, it’s both responsive and robust. It won’t make a young rider work hard but it's sturdy enough to handle whatever comes its way – the makings of a thoroughly enjoyable start to life on two wheels.

While the Sport doesn't seem to hold its resale value very well, it does offer an attractive price tag and a long lifespan, which will be music to most parents' ears.

My DS has dyspraxia and really struggled to ride other balance bikes. We put him on the Strider and he picked it up really quickly!

All in all, we found the Strider 12 Sport to be extremely good value for money and an excellent choice for curb-side cycling. It’s on the less expensive side when compared to other bikes we tested and has the potential to be used for up to four years before being passed down to a sibling. It's also lightweight enough that neither child nor adult would be put off taking it out and about.

To get even more use out of your Strider 12 Sport, you could add a pair of pneumatic tyres so that the bike could cope with any terrain. However, most parents will prefer to keep the puncture-proof foam wheels for less maintenance, depending on where their child is doing most of their riding.

All Mumsnet product reviews are written by real parents after weeks of research and testing – this includes recommendations from the Mumsnet forums. We work hard to provide honest and independent advice you can trust. Sometimes, we earn revenue through affiliate (click-to-buy) links in our articles. However, we never allow this to influence our coverage. Read our how we test page to find out more.