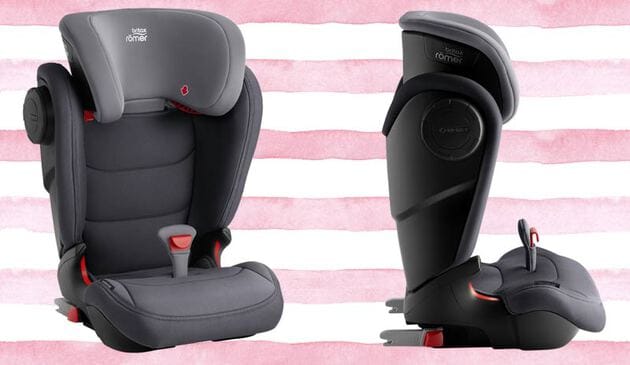 "We have two Kidfix seats. They're fab and both kids like them."

How safe is the Britax Römer Kidfix III M?

With a raft of safety certificates under its belt, and made by a trusted manufacturer, the Kidfix III M boasts a range of safety features.

Firstly, it features SecureGuard which helps to protect the delicate abdominal area – it adds a fourth contact point to the three-point seatbelt, keeping the lap part of the belt in the optimal position over the child’s pelvic bone.

Britax Römer says this helps to reduce abdominal forces in the event of a frontal collision by up to 35%, as proven by their own internal tests.

However, our tester, Jemma, found that the lapbelt didn’t sit correctly when the SecureGuard was used – the crotch piece seemed to pull the seatbelt too low for her five-year-old daughter to sit comfortably and the belt ended up folding in the router, which her child didn’t like. This was also the case when the car seat was used with her daughter's five-year-old friend.

Use is optional, though, so Jemma chose not to use the SecureGuard and had no issue with the seatbelt fitting without it.

The seat also has Side Impact Cushion Technology (SICT), which offers enhanced protection in the event of a side collision. It reduces the force of an impact by minimising the distance between the side of the car and the car seat and absorbs the energy of the impact.

To use, you simply adjust the SICT on the side of the seat nearest the door, which is quick and easy to accomplish. Being able to adjust the SICT to suit the space available in a car is a big advantage, especially when compared to other child car seats we tested, such as the BeSafe iZi Flex Fix i-Size and the Cybex Solution S i-Fix, which don't have this function.

According to the instruction manual, the middle seat is the optimum location for the Britax Römer Kidfix III M in a Citroën Grand C4 Picasso (Jemma's car).

How easy is the Britax Romer Kidfix III M to install?

The Britax Romer Kidfix III M can be fitted using ISOFIX and your car’s three-point seatbelt, or simply with the seatbelt alone.

When it comes to installation, the seat is very easy to install – so much so that Jemma thought it would be difficult to make a mistake, even in a hurry. This is a real plus point for busy families who don’t have the time to decipher complicated seatbelt routings and unintuitive ISOFIX fittings.

The seat comes with clear instructions, which you can also store in a side pocket on the car seat for later use. Jemma found the installation instructions for this seat to be very clear and easy to follow, and there were also plenty of diagrams throughout. As such, it took her a matter of minutes to install the seat using the seatbelt alone and only marginally longer when using ISOFIX.

If using ISOFIX, squeeze the grey lever, pull out the ISOFIX arms and click the car seat into the ISOFIX fittings. When done correctly, the indicators will turn green.

Once your child is in the seat, adjust the headrest to the correct height and then use the car's three-point seatbelt to secure both the child and the car seat. As with all high back boosters, the Britax Römer Kidfix III M doesn’t have an integral harness.

For more clarity and visual guidance, there are four videos available on the Britax Römer website – one shows you how to fit the seat, one shows how to fit accessories and remove the cover, another gives information about the SecureGuard safety feature and the final video is about SICT.

If you’re stuck, you can easily access help and advice online, although the fitting is so simple you probably won’t need to. The website has details about whether the seat will fit your car plus contact information, FAQs and product support.

The seat also has the benefit of a two-year warranty.

Our tester found the Britax Römer Kidfix III M very easy to use on a day-to-day basis, which is something that stood out to her during testing. Jemma’s daughter was able to get in and out of the seat by herself.

The headrest is easy to adjust, which is helpful if you regularly need to use the seat for older or younger siblings. It can be adjusted with one hand and simply slides up or down to where it needs to be. Jemma’s daughter was very comfortable on short trips to school and to the supermarket, and on longer journeys of up to an hour.

She appreciated being able to use three car seats in a row at any one time, but when the Britax Römer Kidfix III M was installed in the middle seat, she needed to do up the seatbelt herself as it was difficult for her daughter to access – a narrower seat could have prevented this. If only two car seats were used, however, her daughter could easily strap herself in.

Weighing in at 7.5kg, the size and weight of the Kidfix III M means it wouldn't be practical for taking on holiday. It could, at a push, be used in a taxi. 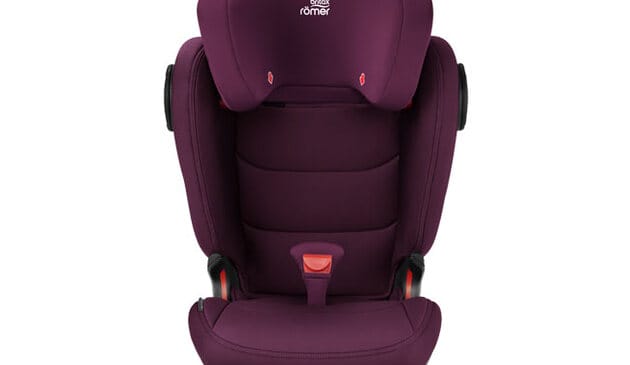 With an ergonomic headrest and good-quality fabrics, the design of the Kidfix III M means it's comfortable as well as sleek for children who want to feel more grown up.

While it is a bulky seat when compared to other seats we tested, such as the BeSafe iZi Flex Fix i-Size, the seat area is 20% bigger than most other seats in this age group according to Britax Römer. This not only means plenty of room for even the tallest of children, but also added comfort thanks to the seat's soft front section.

The wider V-shaped backrest also adjusts to suit a growing child, which means they’ll be snug and cosy when they’re small but have more than enough space as they grow.

The seat comes in eight colourways – Cosmos Black, Storm Grey, Fire Red, Burgundy Red, Moonlight Blue, Cool Flow (Black), Cool Flow (Silver), and Cool Flow (Blue) – so there's something to suit every taste. Jemma’s seat was in the Storm Grey colour, a design that pleased both her and her daughter.

While the seat can be spot-cleaned with a damp cloth, the covers are removable for a thorough machine wash at 30 degrees. Once it’s clean, there’s a handy clips system to help parents put the cover back on, which Jemma felt was a real help.

She found that the cover looked as good as new after washing, and milk and juice stains all came out in the first wash. As with all of the seats Jemma tested, crumbs did find their way into creases, but were easy to remove.

The Britax Römer Kidfix III M is one of the more expensive seats we tested. That said, it’s still £19 cheaper than our Best Child Car Seat 2020, the Maxi-Cosi Kore i-Size, and £80 less than the BeSafe iZi Flex Fix i-Size, even at full price.

For a lovely, comfortable seat packed full of safety features, we think it offers good value for money.

If you have a larger budget, there are are extras available to buy, including a seat protector and a seat organiser, all at reasonable prices.

Attractive, comfortable and roomy, the Britax Römer Kidfix III M combines practicality with both safety and style. From installing it in the car to washing the covers, it's an absolute breeze to use and a great choice if your child is on the taller side.

All-in-all, if you’re looking for a high back booster to make your life easier while also giving you peace of mind, the Kidfix III M may well be the car seat for you.