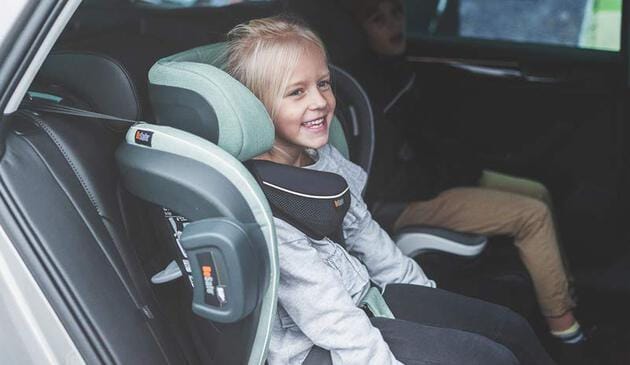 "The BeSafe iZi Flex Fix is very good, although it's also very expensive."

How safe is the BeSafe iZi Flex Fix i-Size?

The BeSafe iZi Flex Fix i-Size conforms to the newer R129/02 regulation which bases seat suitability on height rather than weight and rigorously tests for side impact safety. In addition, high back booster seats approved under the R129 regulations have no weight limitation, even when installed with ISOFIX.

In 2018, the German test institute ADAC awarded the seat ‘Good’ scores in all tested categories. It was the only seat in the test to combine an outstanding side impact score with great results for space for the child and use of space in the car.

The seat has three layers of Side Impact Protection and the adjustable headrest has been designed for maximum safety and comfort. The height of the headrest is adjusted by simply turning the height-adjuster handle.

SIP+ (additional Side Impact Protection) exceeds the R129 regulations, absorbing additional force by deforming on impact and reducing side movement.

As with all high back booster seats, there is no integral harness on BeSafe iZi Flex Fix i-Size. Your child is secured in the seat with your car’s three-point seatbelt – red belt guides (including at the shoulder) give a good indication of the correct placement and position of the seatbelt. Our tester, Jemma, found these easy to follow.

The seat has a foldable lapbelt guider which sits at the front of the seat and ensures the correct positioning of the lap part of the belt. A magnet makes opening and closing it easy. The guider is made of soft, padded materials.

That said, Jemma’s daughter didn’t always want to use the lapbelt guider as it felt restricting – and it is optional. However, when Jemma did use the guider, her daughter found it comfortable overall.

Jemma felt it would be difficult to make a mistake when fitting the BeSafe iZi Flex Fix i-Size, and the ease with which the headrest adjusts means that the seat can just as easily be used in the correct position with a taller or shorter sibling. She found the headrest much easier to adjust than on the Apramo Ostara Fix, for example, which we also put through testing.

When using the ISOFIX and seatbelt configuration, Jemma found the seat to be stable, both with and without a child in it. Using the purely belted installation, the seat felt stable with her child in it but was a bit wobbly when she wasn't.

If your child isn’t using the seat, and it isn’t secured with ISOFIX fixings, then you must secure the seat with the seatbelt at all times.

How easy is the BeSafe iZi Flex Fix i-Size to install?

BeSafe's website indicates where the iZi Flex Fix i-Size can be used in various cars. In Jemma’s case, it could be used in any seat in the middle row of her Citroën Grand C4 Picasso, which was essential as she needed to use the car seat alongside her Maxi-Cosi Priori XP and Maxi-Cosi CabrioFix.

The seat can be installed using ISOFIX and the car’s three-point seatbelt, or with the seatbelt alone. If using ISOFIX, pull the release handle to extend the connectors. The arms lock into position when totally extended. Click the seat into the anchorage points and the indicators will turn green when the connectors are correctly in place.

Indicators are provided on the top of the ISOFIX arms as well as on the side (which is the usual position). Jemma found the top location was much easier to view when installing the seat. Push the release handle back into the base and then push the car seat as far as possible towards the back of the vehicle seat. Use the guides to secure the child and car seat with the seatbelt.

During testing, the seat took approximately five minutes to install. Jemma also noted that it was marginally quicker to install without using ISOFIX.

If you lose your paper copy, you can download an instruction manual on the BeSafe website and there’s an installation video that you can watch for visual guidance. There’s also plenty of other useful information on the website, including a contact form of you need any further help or advice. The iZi Flex FIX i-Size also comes with a two-year warranty.

Jemma found the seat very easy to use on a day-to-day basis, especially for the school run and trips to the supermarket. On longer journeys of up to an hour, her daughter (almost six at the time of testing) was very comfortable throughout. She also found it easy to climb in and out of the seat before and after each journey.

BeSafe's iZi Flex Fix i-Size has one recline position, which is handy for longer journeys when your child needs a nap. While the seat doesn’t recline very far (just a slight tilt), it's enough to prevent the child’s head from tipping forwards if they fall asleep.

The only other child car seat we tested with a recline feature was the Cybex Solution Z i-Fix. With the Cybex seat, however, only the headrest reclined, which Jemma thought was less useful option than on the BeSafe. For the latter, Jemma’s daughter really liked having a recline feature that extended to the whole seat as it offered additional comfort during longer journeys.

For Jemma, the iZi Flex Fix i-Size was easy to use even in a rush and her five-year-old could usually strap herself into the seat, which was really important when she wanted to be more independent.

Do bear in mind though that it may be tricky for a child to strap themselves in if you're using three car seats in a row – the space between the seats is narrower which means that a child, especially a younger one, may struggle to reach the seatbelt socket. This is true of all the seats we tested, however.

This seat is specially designed to sit alongside two other child seats and, as such, it fitted in the middle row of Jemma’s car with ease without causing any distraction to the driver.

If positioned next to a window, the Side Impact Protection bumpers are removable on the side furthest from the window. If used in the middle seat, the bumpers can be removed on both sides, if required. There is a video detailing how to do this on the BeSafe website.

The seat has an integrated carrying handle so it can be transferred between cars or used in a taxi. That said, Jemma found the handle a bit too small to use. She also thought that the seat was too heavy and bulky, at 7kg, to be taken on holiday. 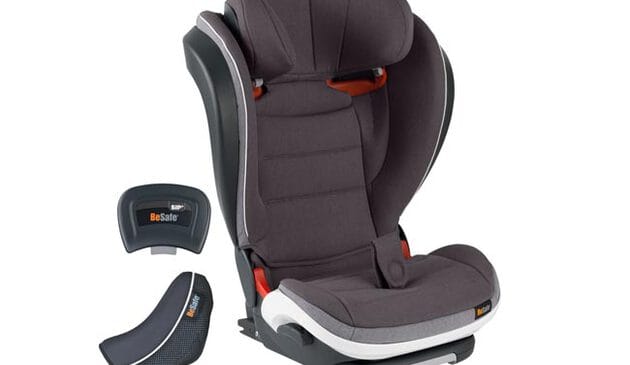 The BeSafe iZi Flex Fix i-Size is a smart-looking seat made of 100% polyester. As a result, it feels durable but comfy.

There’s nothing babyish about this seat, which gives it increased longevity – your child should like the seat as much for its looks as you will for its safety credentials.

It also comes in 11 different colours, so there's plenty of choice to suit most parents (and most children). Jemma tested the metallic melange colourway, which she and her daughter both enjoyed.

The covers were very easy to remove for washing. Dried-on juice and milk stains came out in the first wash at 30 degrees and other, lighter stains could be removed with a damp cloth. Crumbs did get stuck in the creases of the seat, however they were easy enough to remove.

While the covers were simple to wash, our tester found that they were actually quite tricky to put back on, which could make washing them regularly fairly time-consuming. But once they were back on, the seat looked brand-new. There was also no wear and tear during the testing period.

While we think the BeSafe iZi Flex Fix i-Size is great value for money (thanks to its additional safety features and easy-to-use design), it’s definitely worth shopping around as the seat can be found at a variety of prices, both above and below the £249 RRP.

After testing, Jemma said she would consider buying this seat as, in addition to its excellent safety credentials, it really appealed to her daughter when it came to comfort and aesthetics.

The colour options are all neutral so the car seat doesn’t look babyish at all, and the fact that the fabric is similar to that used for a car’s upholstery means that the seat is both hard-wearing and easy to clean.

There are extras available to buy, including a car seat protector, a ‘sleeping help’ cushion, and a tablet and seat cover – this slips over the back of the front passenger's seat or driver's seat to hold a tablet in place.

With impressive safety features, a handy recline option and the flexibility for parents to fit three car seats in a row, the BeSafe iZi Flex Fix i-Size is a versatile seat for busy families and an excellent choice for most parents.