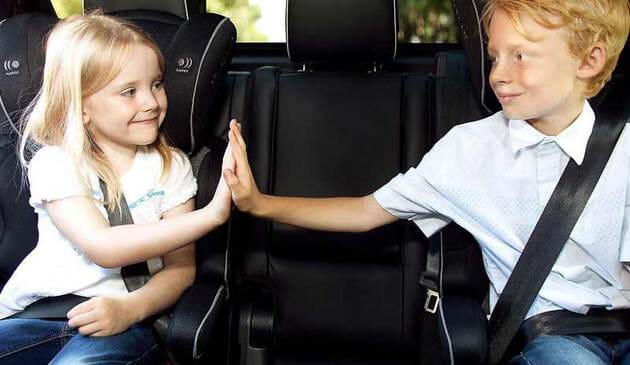 How safe is the Apramo Ostara Fix?

Apramo's Ostara Fix is heavily padded around the head, sides and hips to keep a child secure, comfortable and well-cushioned at all times. The seat also has Superior Side Impact Protection – extra cushioning designed to protect a child in the event of a side collision.

As with all child car seats in this age group, the child is secured into the Apramo Ostara Fix using the car's three-point seatbelt – there is no harness in the seat itself.

The headrest has seven positions which means your child’s head will be in the correct position as they grow, which is crucial in a seat that should last until they’re 12 years old.

The seat’s simplicity also makes it safe. Installation is easy to reduce any margin for error, which means that parents can feel confident that the seat is always fitted safely. When you’re running late and feeling stressed, as all parents occasionally are, it can be easy to make mistakes. As such, it’s reassuring to know that this seat is pretty much failsafe however rushed you may be.

When Jemma, our tester, fitted the seat in her Citroën Grand C4 Picasso using both ISOFIX and the car's seatbelt, the Ostara felt stable both with and without her daughter in the seat. Installed using the seatbelt-only configuration, it felt stable with her child in the seat but wobbly without. With that said, it still didn’t move around inside her car when on the move.

The Ostara's simple design means that there’s nothing to distract the driver, even when positioned in the middle seat of a car, and there are no loose parts to trap small fingers or bits that could be pulled off and swallowed. 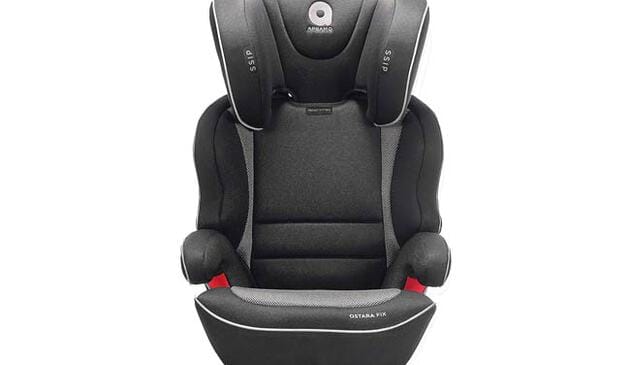 How easy is the Apramo Ostara Fix to install?

Everything you need to assemble this seat is provided inside the box. The manual is clear and easy to follow, and mainly consists of simple illustrations. There are clear instructions too for adjusting the seat to suit different-sized children.

Red belt guides give a good indication of the correct route for the seatbelt to follow, and the seatbelt fitted comfortably during testing with good placement across the lap and chest.

Jemma did find that the height markings on the headrest were somewhat misleading and, while there are seven height settings to choose from, she found the adjustment mechanism tricky to operate.

There are visible height markings to help you adjust the headrest to the correct height, but they didn’t work for her daughter who was almost six years old at the time of testing.

Setting the headrest to her indicated height resulted in the headrest not being at the correct level for her and, overall, Jemma felt that the height markings were more likely to cause the headrest to be adjusted incorrectly than to be helpful.

That said, once the headrest was at the right height, it was quick and easy to install the seat into the car. It took a matter of minutes to install using both ISOFIX and the three-point seatbelt, and even less time when using the seatbelt alone.

Do bear in mind though that, if you are just using the seatbelt, you will need to make sure that the seat is always belted into the car when not being used by a child.

If using ISOFIX, press the ISOFIX release button and extend the connectors. Push both connectors into the car's ISOFIX points so that the indicators turn green. Then, once your child is in the seat, use the red belt guides to secure the seat and your child into the car.

The instruction manual can be stored in a small pocket in the seat and it can also be downloaded from the Apramo website if you need a further copy, where you can also find contact details and more information about the company.

The company’s head office is in China – there isn’t a customer helpline available but there is an email address if you have any questions. Apramo also has a YouTube channel with a selection of helpful videos.

The seat comes with a two-year warranty.

Day-to-day, Jemma’s daughter was comfortable in the seat during short and long trips, including the school run, jaunts to the supermarket and on a longer journey of approximately an hour.

Before and after each journey, she found it easy to get in and out of the seat by herself, which was important when she wanted to be more independent.

Be aware, though, that if you use the car seat in the middle of a row, it may be more difficult for a child (particularly a younger one) to strap themselves in as the shape of the base, which has armrests, means that there’s less space to access the seatbelt socket.

Otherwise, it was quick and easy for Jemma and her family to get in and out of the car on a daily basis, which was especially welcomed during busy school runs.

The Ostara fitted well in the middle row of Jemma’s car alongside two other child seats as it was almost the same width as the car's actual seat. As with all car seats of this group, however, you do need to use a three-point seatbelt for installation, so the Ostara can only be used in the middle if you have a three-point belt – not a lap belt.

The real advantage of this seat though is that it’s very light (5.5kg). In comparison, the BeSafe iZi Flex FIX i-Size and the Britax Römer Kidfix III M, which we also tested, weigh 7kg and 7.5kg respectively.

Another advantage for families on the go is that the Ostara comes in two parts so is easier to pack than both the BeSafe and the Britax Römer, making it a great choice for taking on holiday.

There’s also a travel bag available at an additional cost to protect the seat from any wear and tear during travel. The seat could be used in a taxi if necessary.

When it comes to aesthetics, the Apramo Ostara Fix has a basic design. But, like two of our other Mumsnet Best winners, the Maxi-Cosi Kore i-Size and the Cozy N Safe Augusta EZFix, this can be helpful when choosing a car seat in this age group – most parents are after a seat with longevity that their child also won’t object to as they get older.

But, while the design is simple, the Ostara certainly doesn't look cheap – it has clean lines and thick padding that is both comfortable and durable. Jemma also thought the seat was more attractive than others in its price range.

With that said, her daughter did find the mesh polyester irritating at first (she reported that it felt like ‘crumbs’), but this is something she soon got used to. A mesh fabric also means that actual crumbs could potentially get stuck in the seat.

The Ostara comes in three colourways that will appeal to all ages – ink black, steel grey, and flame red. Jemma tested the ink black seat, and both she and her daughter were happy with the colour. 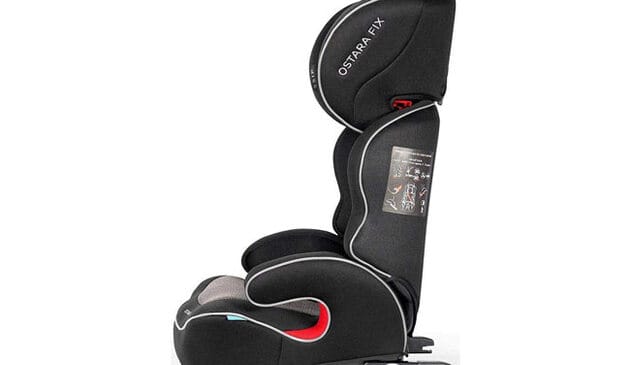 Overall, the Ostara Fix can easily be wiped clean. When the covers do need a proper wash, they can also be removed quickly and popped in the washing machine. They are easy to put back on once clean, too.

Jemma washed the covers at 30 degrees, and dried-on milk and juice stains both came out in the first wash.

There were no signs of wear and tear during the period the seat was tested.

The Apramo Ostara Fix is a good-looking seat that provides great safety. It doesn’t come with any extras, but there are some accessories available to buy, including a car seat protector that comes complete with a storage pocket.

While the Ostara retails at £119, it can be bought online for less – although we'd always advise not to buy any car seat secondhand. Given its potential longevity, lasting from three years of age all the way up to 12, we think it offers great value for money.

While the headrest was tricky to adjust, the Apramo Ostara Fix is an ideal choice if you want a seat that you can switch between cars. It's also a great option for holidays as it's lightweight and easy to use.

All-in-all, it's a simple and safe child car seat that should really go the distance.

All Mumsnet product reviews are written by real parents after weeks of research and testing – this includes recommendations from the Mumsnet forums. We work hard to provide honest and independent advice you can trust. Sometimes, we earn revenue through click-to-buy links in our articles. However, we never allow this to influence our coverage. Read our how we test page to find out more.

For more information about what to look for when buying a child car seat, check out our buyer's guide.