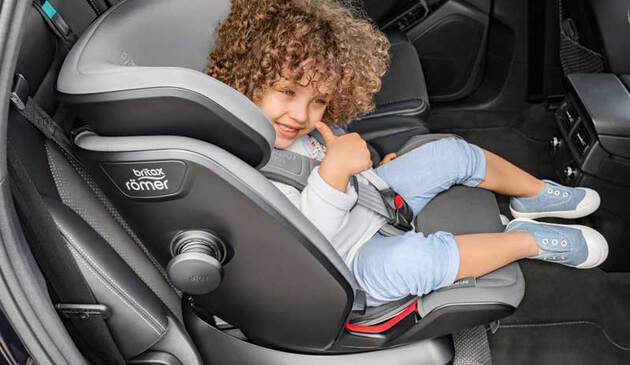 "An excellent car seat in my opinion."

How safe is the Britax Römer Advansafix IV R?

In Group 1 mode, this seat is installed using the ISOFIX points in your vehicle – you’ll know you’ve connected it properly when both indicators turn green.

The seat is further secured with a top tether strap that will reduce forward momentum in the event of a collision. Again, when you’ve pulled the strap tight enough the indicators will turn green. The stitching in the tether is designed to progressively rip after an impact – this absorbs some of the force.

If you do have an accident, the pivot link ISOFIX system directs the force of the impact downwards into the vehicle seat and then forwards more gently – this reduces the risk of head and neck injury.

SICT is another attractive safety feature of the Advansafix IV R. It reduces impact in a side collision by minimising the distance between the car and the seat. It deforms to absorb the energy of an impact, further protecting your child. It’s easy to use too – simply adjust the SICT on the side of the seat closest to the door.

The V-shaped headrest controls the movement of your child’s head, again offering more protection in the event of a crash.

When your child is 18kg (around four years old), the seat can be secured either with ISOFIX and the car’s three-point seatbelt or with the seatbelt alone. It’s easy to install in both these configurations, even if you’re in a hurry.

Your child is secured with the five-point harness until they are a maximum weight of 18kg. Once your child is 15kg, you can use the car’s seatbelt instead and the five-point harness can be stored away in the back of the seat. The bottom part of the harness is part of the Flip&Grow system. You can flip this over, so that the SecureGuard (see below) is now above the seat (there’s a really useful video online that shows you exactly how to do all of this).

As your child grows, they will be less inclined to sit still in their car seat. One of the issues this can cause is that when they wriggle about, and in the event of a collision, the lap part of the three-point seatbelt can move into a position where it can damage your child’s abdomen.

The SecureGuard lap belt positioner keeps the belt in the optimal position to protect your child’s abdomen. According to Britax Römer’s internal testing, this can reduce forces in an impact by a huge 35%.

The Advansafix also boasts high-back booster protection that works in three ways. The seat shell provides head to hip protection in the event of a collision, especially a side impact. The upper and lower belt guides make sure the seatbelt is in the correct position, and the padded headrest makes sure your child’s head and neck is protected and comfortable.

Once installed, the seat feels very sturdy and secure in all its configurations. There is nothing that rubs or irritates, nowhere for fingers to get caught and no loose bits and pieces that could fall off, or be pulled off or swallowed. Even the five-point harness, once outgrown, is stored away in the seat, so nothing can get lost either.

One thing to bear in mind with this seat is that it is forward-facing only. If you want your child to be rear-facing up to the age of four, but you want a seat that lasts a long time, then you might want to consider a seat like the Cozy N Safe Arthur instead, which can also be used up to age 12, but allows for both a rear- and forward-facing position.

A seat that will hopefully last until your child is 12 will need to appeal at all ages – and this non-fussy sleek design isn’t babysish at all. This should mean that your 10-year-old is as happy as your toddler.

The 100% polyester material looks and feels good – it’s practical (easy to wipe clean) as well as comfortable and there’s plenty of padding.

The Advansafix IV R is available in a variety of colours – 12 in all, so you’re bound to find an option everyone is happy with. Our tester, Anna, tested the storm grey seat, which was very neutral.

Everything you need is included in the box – the seat and the instructions. While Anna did feel that the nine different booklets in the box were a bit overwhelming, the instructions were clear overall with a selection of both diagrams and written steps. There are easy-to-follow videos online too if you do get stuck.

To install the seat for Group 1, you simply use the ISOFIX and top tether. There are indicators to show that you’ve fitted the seat securely so you can be confident and happy that your child is safe during car journeys.

The five-point harness for use at this stage is simple to use and secure. It fits snugly and comfortably and is easy to adjust.

For Group 2 and 3, you can either use the ISOFIX fittings and the three-point seat belt, or just the seatbelt – handy if you’re switching between cars, especially those that don’t have ISOFIX anchor points. The seatbelt routing is very easy and there’s little, if any, room for error.

The seat can easily be installed by one person in any of its configurations.

There’s a whole support section on the website too, along with contact details and links to social media. The seat doesn’t come with any extras, but there are a range of accessories to buy, from spare covers to sunshades and seat organisers. 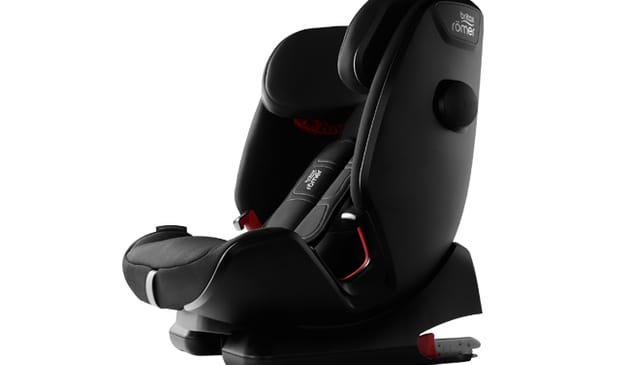 Anna found this one of the easiest toddler car seats to use – easier than the Axkid Move or the Joie Every Stage FX Signature, which she also put through testing.

Her child could climb in and out of the car easily before and after every journey, and the straps were quick and easy to secure even when he was wriggling – although one niggle was that the release button was a bit stiff.

Because of the age of her two-year-old, Anna didn’t use the seatbelt to secure him in the seat (so this is something we couldn't test), but he was happy and comfy strapped in by the harness.

Even though it's a large seat, the Advansafix didn't obstruct the driver's view at all and it fitted in smoothly with everyday family life – it was taken on the school run, and on trips to nursery and the supermarket.

It also made longer journeys of up to two and a half hours hassle-free, with the toddler falling asleep happily. The headrest also meant his head and neck stayed comfortable and in the correct position at all times.

The seat is a bit too big, really, to take on holiday and, in Anna's case, she couldn't fit three seats in the back of her car – she tested the seat in her 2012 Ford B-Max.

You could potentially use the seat in a taxi if you were using the seatbelt fixings alone for installation, but this can only be done when your child is between 15kg and 36kg.

The cover is machine-washable, which is really convenient if you're using this seat with a toddler, albeit a bit fiddly to remove and put back on.

There’s also a lot of padding and Anna found that the cover took a long time to dry, which meant that the seat was out of action for a day or two (you can invest in a spare cover, but this doesn't come cheap).

All in all, it held up well to machine washing and the majority of stains came out in the first wash. A smoothie stain lingered faintly, but the colour of the seat meant that it was hardly noticeable. It spot cleans really well though, so a full machine wash could well be a rare occurrence.

The RRP for this seat is £250, but you will be able to find it cheaper.

For a seat that lasts up until age 12 and doesn't require a separate ISOFIX base, we think it represents good value for money.

Quite simply, the Britax Römer Advansafix IV R looks great, has more safety features than you can shake a stick at and lasts for ages.

While it may be a big seat, it's simple and quick to install and has a pleasing design that many parents will appreciate.