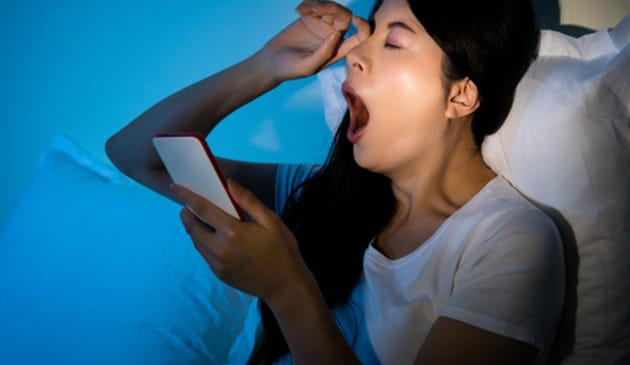 Lack of sleep is a problem for nearly all new parents and one in three people suffer at some point in their lives. If your baby is waking several times a night, you can at least take solace from the fact that you’re not alone and that your torment will end eventually. Babies do eventually sleep through – we promise.

The effects of lack of sleep range from the comic (pouring milk instead of fabric conditioner into the washing machine) to the dangerous (dozing off when you really should be awake). In most cases, however, it simply leaves you feeling irritable and lethargic. Here’s how to get through it with your nerves (mostly) intact.

Before my son was born I could happily sleep for 10 hours a night but now I get about five hours broken into three chunks.

How much sleep do I need?

This is a fraught question and you’ve probably heard differing views. It’s true that some people need more sleep than others but anything less than seven hours a night will leave you feeling tired the next day. Margaret Thatcher claimed she only needed five-and-a-half hours sleep while the current president of the United States says he gets by on four hours a night. Make of that what you will but most experts agree that eight hours is ideal. That might sound like a lot if you have young children and/or work full-time, but it’s what we should all be aiming for.

What are the symptoms of sleep deprivation?

The odd sleepless night is to be expected for parents. But if you find yourself constantly suppressing yawns and feeling dozy in the afternoon, you might be suffering from sleep deprivation.

A feeling of fogginess in the brain is common among people who aren’t getting enough sleep. You might struggle to concentrate or make quick decisions and find that your spirits are low for no reason you can put your finger on. You could be more accident-prone than usual and catch colds and flu regularly, as lack of sleep can weaken your immune system.

For the vast majority of parents, lack of a sleep is a short term problem that’s solved as soon as you find the routine that suits you and your baby.

For a small unlucky minority, however, lack of sleep can be a vicious circle. It can be a symptom of depression or anxiety but it also causes and perpetuates those very same problems. Sleeping less than seven hours a night can increase your risk of obesity, possibly due to reduced levels of leptin (the chemical that makes you feel full up) and an increase in ghrelin which stimulates hunger.

Sleep deprivation can also affect your relationship. If one of you isn’t sleeping well, then that might keep the other one awake, too, with both of you feeling irritable the next day, and prone to sniping at each other. Whatever you do try to avoid getting into the ‘Who’s More Tired’ competition – no one ever comes out of that one a winner. Lack of sleep can also reduce your libido which can lead to relationship difficulties, and is frankly not much fun for you either.

Can lack of sleep kill you?

Ok, cool down, tired people. That this question ranks fairly highly on internet searches demonstrates not that the answer is yes but that sleep deprivation is a common problem that drives its victims to anxious late-night Googling. The short answer to the question is an emphatic, “No”.

In extreme cases, the long term consequences of sleep deprivation can be life-threatening, with lack of sleep contributing to heart disease, diabetes and high blood pressure. But this is very rare and not something you need to worry about. Definitely don’t let it keep you awake at night. 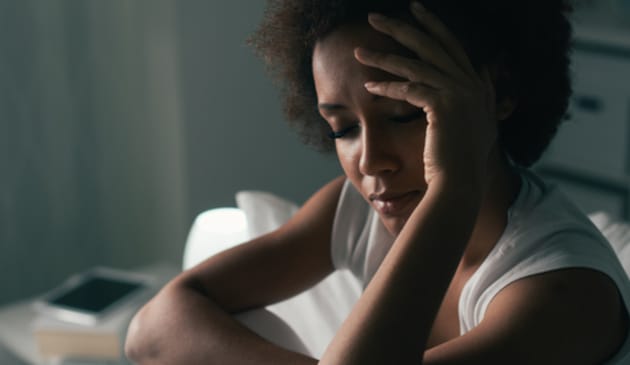 How can I get more sleep?

You probably won’t solve your sleep issues overnight (sorry) but there are steps you can take straight away and you could feel the effects before too long.

Try not to obsess about it

Easier said than done, we appreciate. It's just that if you’re struggling to get to sleep at night then it can play on your mind, making you anxious as bedtime approaches, as you anticipate more hours of lying there worrying about why you can’t sleep.

Some tired parents even talk about sleep envy and say they feel resentment towards those smug people who settle down easily for several hours of shut-eye every night. Sleep deprivation can drive your mind to some pretty strange places but it helps you to keep a sense of perspective if you can see the funny side, like this Mumsnetter: “I watched The Shawshank Redemption and my first thought was: a good night's sleep in my own quiet cell. Prison was my fantasy.”

The key is to train yourself to not think about. Simply remember that it will pass and resolve not to let it trouble you. Take each night as it comes and, if your baby is keeping you up, then accept that this is perfectly normal and will end eventually. It’s a slog but you can and will get through it.

Sleep when you can

I cope better some days than others. If I can go back to bed in the morning, even if it is for 20 mins, it makes a huge difference.

Many people say they’re too busy to increase their hours of sleep, especially on weekdays, so try going to bed an hour earlier on weekend evenings. Don’t set the alarm for the morning and, if possible, ask your partner to take care of the children for the first hour or two. Adding small increases of sleep here and there can really start to alter your pattern and give you more energy.

And remember that there could even be an upside. After all, learning to sleep when and where you can is an invaluable skill. If you fancy joining the army or MI5 then it’s definitely something to add to your CV. There are everyday benefits to be enjoyed too, as this Mumsnetter, who survived sleep deprivation and came out the other side stronger, attests: “I can now sleep anytime, anywhere. Useful on boring train journeys…"

Make sure your bedroom is right for you

If you’re going to sleep then you need to be comfortable. Make sure your bed isn’t too hard or too soft. What about your bedroom lights? Perhaps they should be dimmer so that, if your baby wakes up and needs a feed, you won’t be left wide awake by the glare of powerful bulbs.

I would have bitten off someone's arm if they had offered to take my eldest for even a few hours when the youngest was at his worst.

If you have a partner, friends or relatives who are willing to take your children off your hands for a few hours while you catch some zs then accept the offer. In all areas of parenting, there’s no need to feel guilty about saying yes to help.

Cut out the caffeine 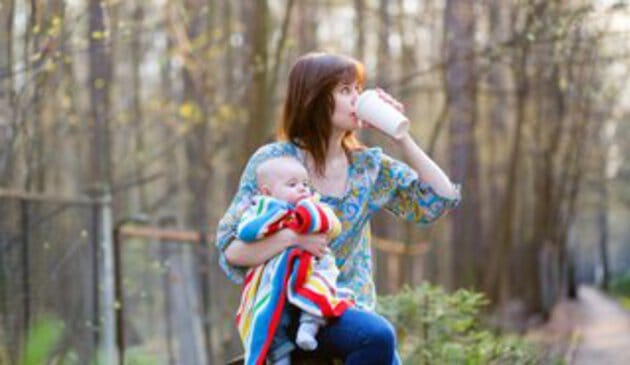 We’ve all done it – tried to compensate for a lack of sleep by chugging six cups of coffee before 11am. You might feel a short-term boost but long-term this approach will actually complicate your sleep pattern. So resist caffeine, especially after 6pm, and let tiredness set in before you go to bed.

Turning to food, particularly snacks which are high in sugar and fat, is another common response to sleep deprivation. But while a midnight feast may pass some time and give you a quick energy boost, eating at night could actually end up keeping you awake, and in the longer term can result in indigestion or weight gain – a vicious circle which will leave you feeling demoralised. It's preachy but true to say that you're better off taking multivitamins and persisting with attempts to get some shut-eye.

These days, it’s important to know when to cut your connection to the outside world. Yes, it’s easy to convince yourself that you can’t power down but really there’s no excuse for taking your phone to bed. Perhaps you’re waiting for an important work email or you want to see if that picture you posted on Facebook has received comments or if yours was the winning bid for those trousers on Ebay. Maybe you’re waiting to find out if your team have signed a big-name player before the transfer deadline. Whatever. None of this matters in comparison with your sleep. It can all wait. So power down. Leave your phone in another room. This is your time. Go to sleep.

Establishing a healthy exercise routine could increase your chances of improving your sleeping patterns. Exercising will counter the low spirits that sleep deprivation can bring on. It will clear your head and tire you out in time for bed. If your body feels like it’s had a good workout then, come the end of the day, you will be ready to sleep.

Some people find breathing techniques help them to combat stress and relax at night. If you think this might be for you then find out more and give it a go. After all, it’s worth trying anything that helps you to get your sleeping pattern in order.

“In the first few months, my son woke up four times a night, then wouldn't go back to sleep from 5am. I got better in the spring and summer, for some reason. My advice to anyone going through this is to get plenty of fresh air, nap in the day and have early nights when you can.”

“My eldest daughter finally started sleeping through when she went to school. Until then it was difficult but I found having a bath with nice bubbles, as soon as she went to bed in the evening, helped me relax, so I could get off to sleep quickly and not waste precious sleeping time.”

“I suffer from sleep deprivation and always find I cope better when I eat well and avoid the vicious caffeine cycle. My advice is to take zinc, iron, multivitamins, and get to bed by 9pm.”

“The lack of sleep is something I think everyone underestimates before they have a baby and it was the biggest shock to me. We have no relatives nearby and I went without sleep for months. I don't have any advice but, although it doesn't seem like it at the time, it doesn't last forever.”

Celebrating a new arrival? Create your very own Amazon baby wishlist and get 15% off baby items when you spend £200 or more.

How to sleep well: top tips for getting a good night’s sleep