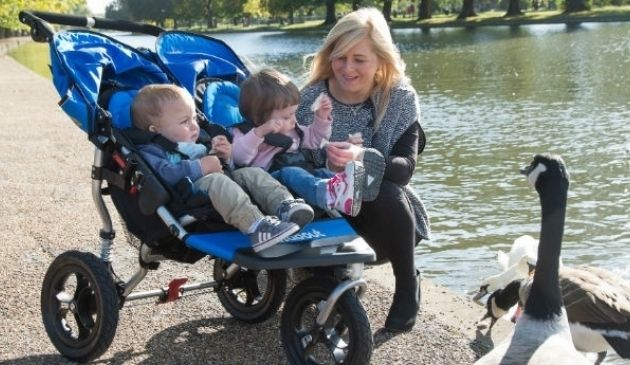 Watch the Out n About Nipper Double in action 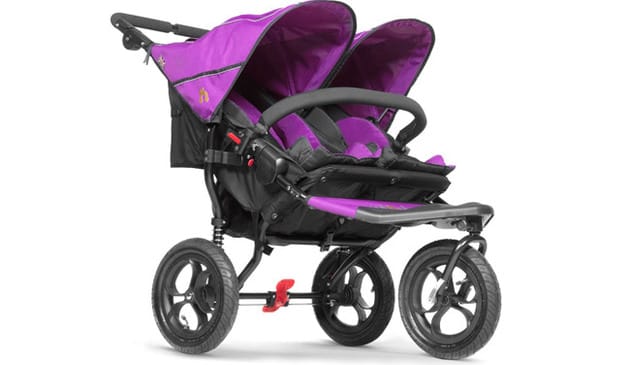 How easy is the Out n About Nipper Double 360 V4 to assemble?

It’s good news from the moment the box arrives. The Nipper Double 360 V4 arrives almost fully assembled – chassis, seats and hoods in place. All you’ll need to do is pop the wheels on and go.

You’re unlikely to get stuck, but there’s an easy-to-follow manual with photographs if you do. Should anything be missing or damaged, Out n About’s customer service team have a good reputation for help and organising replacement parts.

The Nipper comes with a two-year warranty – more generous than many of its competitors, like the Mountain Buggy Nano Duo – and Out n About’s clear, helpful website also offers options for paid servicing and door-to-door repairs. All in all, the Nipper Double is ready to be with you for the long haul.

While perhaps not the most elegant double buggy on the market, the Nipper’s been designed to look sporty and practical, made with hardy, high-quality materials and including lots of thoughtful features, such as retractable sun canopies, storage pockets in the hoods and peek-a-boo windows. There’s a choice of seven fabric colours – bright and cheerful as well as classic black – so there should be something to suit all tastes.

The Out n About is the best pushchair I've ever owned - and I've owned quite a few. Basically, what it comes down to is that it's just so light and easy to push, even with my five-year-old and nearly three-year-old in the seats.

What’s the Out n About Nipper Double like to use?

The Nipper Double has a reputation as an off-road buggy, and no wonder – its rear suspension and air-filled tyres make for a smooth ride over even the bumpiest woodland trail. But our tester found it equally well-suited to urban life, as the Out n About double buggy showed itself unfazed by school runs, park trips and errands in town.

The fold and unfold can be managed with one hand at a push, holding a baby in the other – gold dust for any new parent of two – and there’s no need to unclip the seats to do so. All you need to do is release a clip on either side of the buggy while making sure that the seats are in an upright position.

Once folded, it’s freestanding, tucking into the tester's porch very neatly, and there’s an option to take off the wheels if you need to, ie when transporting in the boot of your car. The seats themselves are sturdy and well-lined, with individual sun hoods and reclining mechanisms, so your little nap-refuser won’t keep their sibling awake too. The sun hoods include generous zipped storage pockets on either side, and clear peek-a-boo windows for you to keep an eye on things as you push.

Many people prefer to put small babies in parent-facing seats, of course, and the Nipper doesn’t have this option. Unfortunately there’s no option to use a car seat either, but Out n About have designed a compatible carrycot (additional purchase, £130) which can replace one or both seats if desired. Each seat reclines to a lie-flat position for newborns. And there’s a great deal to be said for having both little ones in roomy seats and with an equally good view, rather than relegating one to a narrow sibling seat by the back wheels.

And what about day-to-day?

While the Nipper Double looks wide thanks to its larger-than-average wheels, it’s actually one of the narrowest side-by-side models on the market (72cm, narrower than the Mountain Buggy Nano Duo or the Bugaboo Donkey Twin) – and, at 12.8kg, it’s also one of the lightest we tested.

It can be carried up and down stairs without difficulty, fits into most car boots, and handle buses, trains and kerbs with aplomb. Thanks to its quick unfold mechanism, our tester also found it a valuable addition to her school run, especially as it’s one of the only side-by-side models to fit through most doorways.

A word about those air-filled tyres, though: unlike solid wheel models, they’re more susceptible to puncture. This is likely to be more of an issue off-road, but Mumsnetters recommend using bike tyre sealant (‘slime’), for added peace of mind. Out n About also sell lightweight plastic wheels separately if you need them – £50 for the set. 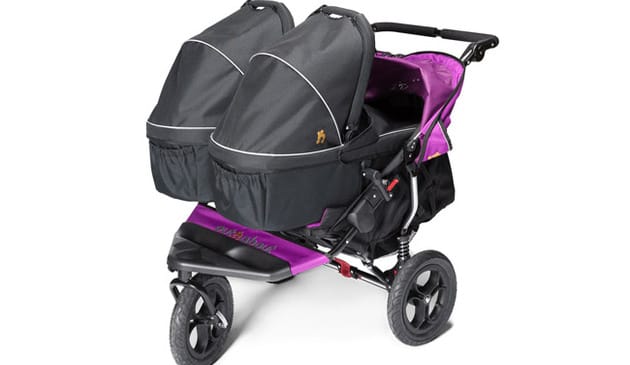 Is there much storage?

There’s no storage basket underneath, which may put some parents off (although you can buy one separately at £29.50), but each seat does have a large shopping pouch secured with a drawstring behind it.

It won’t take a full supermarket shop, but should easily contain book bags, handbags and midweek pints of milk. The Nipper also comes with a large, effective rain cover as standard, which our tester found easy to use even in the most unexpected of downpours.

How safe is the buggy?

Our tester found the Nipper Double to be sturdy and lightweight, with her toddler able to climb into the seat unaided when the pushchair was empty. A trade-off for that light design is extra care when taking children out: during the topple test, the pushchair could tip with heavy shopping bags looped from the handle (though a changing bag didn’t have the same effect, sitting more securely over the back wheels).

The seats look narrow, but in reality were among the roomiest we tested, with a solid foot plate and comfortable padded liners that can also be removed. The reclining mechanism uses a clip and straps that feel secure, even with a larger toddler weighing down the seat.

The five-point harness for each seat is easy to use and secure once in position, though our tester did catch her own fingers a couple of times. And there’s a high-quality, padded bumper bar that adds an extra safety feature, and can be removed quickly at either end to get your littles ones in and out.

The hoods are large and easy to manipulate. It’s worth keeping an eye on them when the sun is low. Our tester noted that the hood extends over the seat but not in front of it, so at the wrong angle there’s a chance your child could have the sun in their eyes. Out n About offer a full UV shade for additional cost (£42.50) if that’s a particular concern.

The brake is a wide, smooth, bright red pedal design, which was easy to click on and off, even in an open-toed shoe, and stayed firmly put when pressed down. There’s also a wrist safety strap for the parent for added peace of mind.

I love this pushchair (when the kids don't pull each others' hair!) and I think it is the best double buggy if you want your kids to recline to sleep.

Unsurprisingly, for a pushchair that performs well off-road, this Out n About double buggy has been designed to clean up nicely. Each seat liner is wipe-clean, but for serious spills they’re easy to remove and machine washable. They fared well in our tester’s washing machine (washed only once following juice spillages), without fading, bleeding or shrinking. The sun hoods are equally easy to remove and can be washed if necessary.

After a week of putting this double buggy through its paces, the chassis, wheels and foam handle still looked to be in good condition – no real scratches (other than the black footplate) or bumps were visible. It has since been used daily by the tester and only the wheels have experienced a little wear and tear.

A top-scorer in every area, the Nipper Double blew our tester away with its intuitive design features, flexibility and a push so easy it felt like gliding over the ground.

With its rear suspension and air-filled tyres taking all the knocks, and its slimline design making public transport a breeze, it’s astonishing that the Nipper Double will set you back less than £400 (RRP actually over £500, but many retailers are selling for lower) – half the price of many of its competitors. That is unless you count all the non-included extras that you might want to buy, which could increase the overall cost – our only real criticism of this well-performing double buggy.

Overall, it’s a quality piece of kit that should suit country mice and city dwellers alike, and a worthy winner of our Best Double Buggy 2019 award.

All Mumsnet product reviews are written by real parents after weeks of research and testing. We work hard to provide honest and independent advice you can trust.