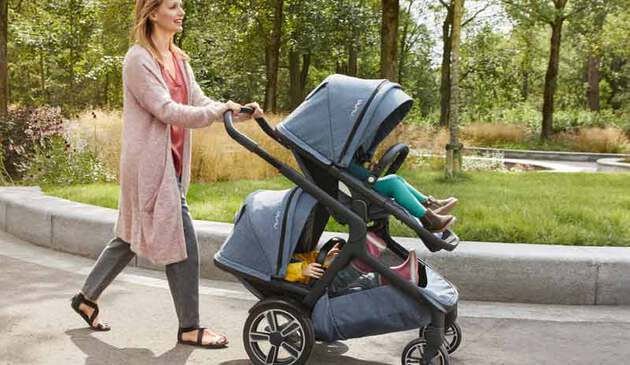 What’s included in the box? 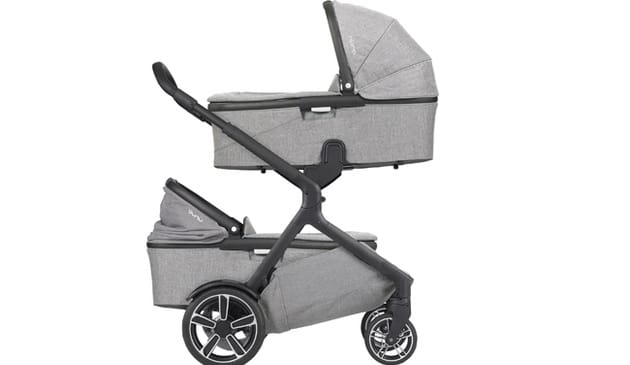 How easy is the Nuna Demi Grow to assemble?

As a tandem-style travel system, it’s not quite as simple as just clicking the wheels on. There are a number of pieces in the Demi Grow box, but straightforward instructions make it an easier task than expected. The booklet includes pictures and a detailed checklist to take you through the process, which involves putting on the back wheels and wheel fenders, assembling the seat and clicking it onto the chassis.

The sibling seat comes separately, but was equally simple to put together. All in all, the set-up took ten minutes and required no tools.

The Demi Grow buggy itself is covered with a two-year warranty, and its accessories with a one-year warranty, which is generous in comparison with many others on the market (like, say, the Mountain Buggy Nano Duo). There are product manuals online, though Nuna doesn’t seem to offer a paid-for repair service.

Immediately, the Demi Grow looks like a beautiful buggy – classy and modern, with a number of thoughtful design touches that combine to make it feel like a luxury product. The seat material is thick and lavishly padded, and comes in three elegant colours: black, grey and a muted blue.

What’s it like to use the Nuna Demi Grow?

There are lots of reasons why you might prefer a tandem pushchair to a side-by-side design, such as manoeuvrability and width (tandem buggies tend to be the width of a single pushchair) and the Demi Grow exemplifies many of them to perfection. Flexible and inclusive, it’s a buggy that tries to cater to a family’s every need – often with great success.

Our tester found it easier to fold and store the pushchair with the seats off (although you can keep the main seat on if you wish); to remove the seats, press the lever on the side and just lift away.

Folding and unfolding both need two hands but neither process is complicated – you lift the clips either side and fold as one piece. Once folded, the Demi Grow is freestanding, so can be stored in a corner, but less compactly, of course, than a side-by-side design with no additional seats.

The chassis was stored in the tester's porch, while the seats were propped up against the wall in the hallway and did take up a bit of space.

And what about day-to-day life?

Like a side-by-side buggy, a tandem buggy comes with its own pros and cons. As a tandem, the Demi Grow is heavier to push than a side-by-side, but the position of the lower seat between the back wheels means that the weight distribution is well-balanced; this combined with large, foam-filled wheels and rear suspension make it an easy buggy to manoeuvre and control.

It performs best of all on pavements, but deals fairly well with bumpy ground too, and the size of those back wheels means it pops over kerbs without you straining a muscle. The tucked-away lower seat also means that, should your toddler want to walk, you won’t feel that the unused seat is in the way.

Because the assembly includes clipping in extra seats, it’s wise to build in a little time when setting off for the school run. Still, the intuitive design means that attaching those seats is straightforward, and the narrow width of the chassis – 62cm – means you may well be able to leave it set up in the hallway anyway.

As the Demi Grow is the same width as a single pushchair, you shouldn’t have any problems getting it in and out of shops or squeezing it onto the bus or train.

In the car boot, it’s a little bulky, and it’s not the lightest either (Nuna list the weight as 12.9kgs, but this – rather disingenuously – is without the second seat, bumper bar, sun hood or seat lining). Our tester found it easier to fit it into the car boot in several pieces, but did keep it in there with other items without much difficulty or inconvenience.

When the chassis is unfolded, there are lots of seating options, detailed in the instruction manual and on Nuna’s website. The buggy chassis comes with the main seat, and also included are two sets of car seat adaptors, and a set of seat/carrycot adaptors (many competitors make these an additional cost).

A car seat or a carrycot – sold separately for £170 and £200, respectively – can be placed in the upper or lower position to accommodate a baby; when in the upper position, any of the seating options can be forward- or parent-facing.

Once your second child is six months old, the sibling seat comes into play: it’s an additional purchase (also £200), but is the same size and quality as the main seat, so neither child is liable to be squashed. No matter where and how your two children like to sit, there’s bound to be a combination that works for everyone.

The seats themselves feel exceptionally well made – thickly padded, with a three-step lever reclining mechanism (two-step in the lower position) and an adjustable calf support. The seat liner can be unzipped and completely removed, leaving a durable mesh-lined seat behind – ideal for preventing overheating in hot weather.

The headrest and straps can be quickly adjusted, and the generous five-point harness is comfortable, padded and secure.

The hoods exceed expectations too. They’re made from UV material with a good visor, and have a peek-a-boo window secured with magnets instead of velcro, so they can be opened without that nap-ruining rip.

Best of all, open a zip at the front and you’ll find a sun-protective ‘dream drape’ to hang over the seat in hot weather. It’s a thoughtful touch that was unique among the double buggies we tested.

The good design doesn’t stop there. Decent rain covers for each seat are included in the box, as are high-quality footmuffs, which are cosy in cold weather.

Is there much storage?

The storage basket is huge – though, of course, with the sibling seat attached, the second child has their legs in the basket and takes up much of the space, so you’ll be putting in the shopping around them.

If you’re using the buggy in single mode, however, it comes with a removable shopping bag that fits into the storage basket, meaning you can take it all out in one go – a sanity-saving addition our tester really appreciated. 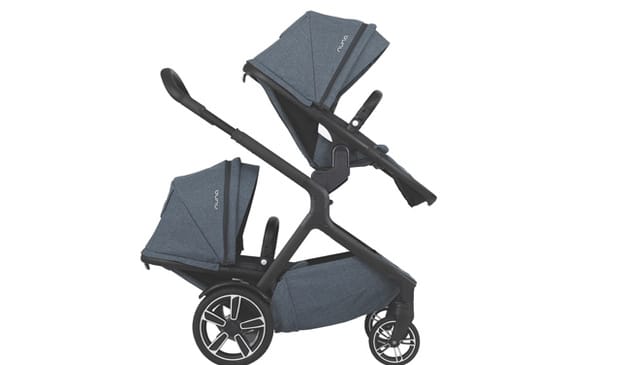 Is the Nuna Demi Grow safe?

Those few extra kilograms of weight come into their own, here: the Demi Grow feels solid and sturdy, and it didn’t topple at all during our test with heavy shopping bags with and without children in the seat.

The seats are large and wonderfully padded – our tester’s children didn’t want to get out of them – and both a toddler and a baby were secured in comfort in the various configurations.

The five-point harness is designed so that the shoulder straps clip into the side straps before going into the central clip. They’re easy to adjust and sit snugly on the shoulders when secured. There are high-quality bumper bars included with each seat, which lift on one side to take the child out.

The handle has a leatherette finish, which is easy to grip and feels comfortable on the hand, and it’s extendable using buttons on the side. And the lower seat is positioned so that you can walk with a normal stride without kicking it – a godsend for those of us with creaky back muscles.

Speaking of that lower seat, parents often worry that a toddler sitting by the back wheels will poke their fingers into the spokes and hurt themselves, but there’s no danger of that here. The Demi Grow comes with wheel fenders to protect any tiny explorers, for added peace of mind.

Finally, the brake is a foot lever design that is flicked up to release and pressed down to secure. Our tester found it a little stiff in practice, but it kept the buggy firmly in place when applied.

The Demi Grow seats have been designed to unzip easily, and they’re machine washable. In our test, following a variety of spillages (juice etc) they came out excellently, without fading or shrinking.

By the end of the testing process the wheels were a little worn and muddy, as we’d expect – but everything was intact and the buggy still looked almost new.

The Nuna Demi Grow has only been around for about a year (it’s also Nuna’s first ever double buggy), but on this evidence we reckon it’s here to stay – it’s a beautiful, cleverly-designed pushchair that offers real flexibility without being quite as expensive as its iCandy and Bugaboo rivals at the luxury end of the market.

With so many extras included in the box, and such high-quality materials used throughout, it represents good value for money – would have been better if a carrycot was included as standard, though – for a buggy that should run right through to babyhood and beyond.