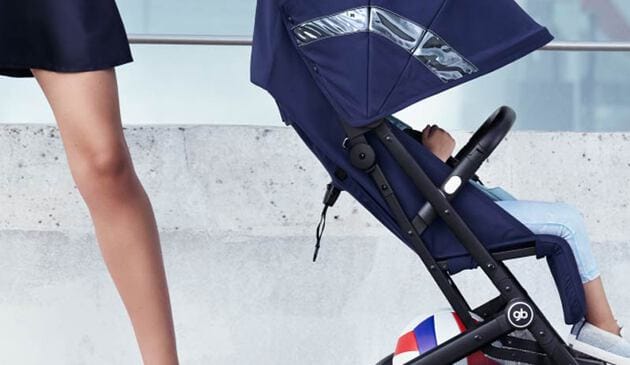 What are the key features of the gb Qbit+?

For me, the best travel pushchair seems to be the gb Qbit+. Just very very small, but quite a lot of features.

The gb Qbit Plus All-Terrain packs a punch as a tiny luxury buggy that keeps up with larger pushchairs, from its travel system capacity to its exceptionally smooth drive.

Eight relatively large wheels (arranged as double wheels) also allow it to tackle surfaces that many lightweight buggies struggle with.

Our parent tester, Adele, found it bumped up and down kerbs with ease and managed dips in the road unusually well for such a small buggy. She put it through its paces, zipping in and out of shops as well as on and off the train and was impressed with the Qbit Plus Stroller’s steering.

Even off-road and up hills it was a reasonable ride. Across grass it just about holds its own, but not quite as well as models that have grooves in their wheels, such as the high-performing Joolz Aer, which we also put through testing.

While lightweight buggies have typically been billed as a follow-on option for older babies and toddlers, the Qbit Plus has the potential to be your main buggy from early on or a compact second you keep in the car boot.

Bear in mind that, though the main seat lies flat, it’s not a smooth or cocooned enough ride for a newborn and isn’t parent-facing. However, you can attach a carrycot or baby car seat (with the infant car seat adaptor), which is an attractive feature of this buggy. Certainly, it’s a great option if you’re planning a trip abroad in the early months.

The Qbit Plus weighs in at 7.7kg, making it middle of the range for the buggies we tested. Our tester noted, though, that it feels lighter than this in operation. She had no difficulty taking up the stairs along with a heavy bag but, admittedly, wouldn't have wanted to carry much else.

At the end of the test period, the Qbit Plus remained in excellent condition and our tester’s feeling was that it would generally be hard-wearing over time.

The gb Qbit Plus comes out of the box with only the wheels to pop on. It took our tester five minutes to make sure everything clicked into place and she found it all highly intuitive. No tools were required.

The visual instructions are simple to follow, complete with everything you’d need to know about assembly, operation and disassembly. The manual is thin on the ground in terms of other details, but everything you’d want to know is available on gb’s website.

The instructions include clear information on how to attach the car seat and carrycot, and the buggy also comes with a two-year warranty. 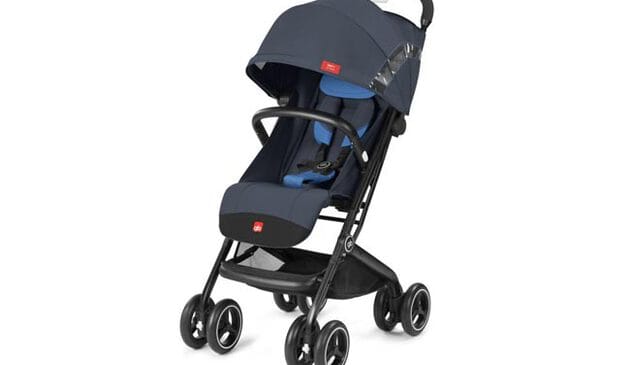 There isn’t as much padding on the Qbit Plus as on other buggies we tested, such as this year's overall winner, the Micralite ProFold, but there is a headrest for smaller passengers. An advantage of less padding is that the buggy will also remain cool in hotter weather.

Our tester’s three-year-old seemed very comfortable in the seat regardless and, in fact, Adele felt it was the perfect size for her daughter with room left to grow.

The handlebar doesn’t extend, but both parents in our tester family (5’6” and 6’1” respectively) found the height suitable.

The handlebar is covered in foam which offers great cushioning. It’s mostly water-resistant but, if it gets very wet, it can take a little while to dry. All in all, though, it’s an enjoyable, highly responsive drive with no extra effort required.

gb's Qbit Plus also comes with a sturdy footrest, especially suited to the upper end of its age range. The leg is remarkably easy to adjust with a gentle squeeze then lift or push.

How safe is the gb Qbit+ All-Terrain?

Despite being one of the smaller, leaner models we’ve tested, the Qbit Plus feels stable and solidly built. It certainly won’t blow over. It passed our topple test with flying colours, standing its ground when a changing bag was hung from the handlebar both with and without our tester’s three-year-old in the seat.

It reclines by strap, more or less in four positions, though this mechanism gives lots of freedom over what position your child sits or lies in.

The recline is smooth but could be tricky with a child sitting in the seat, particularly if they’re sleeping. This is often the way with this type of mechanism though and it remained secure throughout testing, never once coming loose.

The five-point harness is simple to adjust, which means that buckling in is faff-free and easily done in a hurry with a wriggly toddler- just feed the straps through buckles at the shoulders and pull.

While the harness feels sturdy, the straps generally have a cheaper feel to them and are rougher than some of the other luxury models on the market, such as the Joolz Aer or Bugaboo Bee5. Our tester’s three-year-old wasn’t able to get her arms out once plugged though, so they certainly do the trick.

Something to note with the brake is that it’s located between the double wheel to the side, which means that larger feet could get trapped while operating it. Our tester also found it a bit stiff in comparison to the brake on the similarly-designed Silver Cross Jet. However, it is highly effective.

The UV-protected sunshade comes down to provide adequate coverage for the upper body – more if you’re pushing a younger passenger. As with most lightweight buggies, the child’s legs are exposed, but you could pair it with a parasol if that's a concern.

The rain cover on the Qbit Plus calls for a special mention as it fits around the back, protecting the whole buggy. It’s also incredibly easy to put on – just slip on and Velcro – and folds up small, resting flat in the storage basket when not in use.

The bumper bar is also exceptionally easy to attach and detach, but not so easy that your child could do it. Although our tester didn’t use it with her three-year-old, it would offer peace of mind to those with younger kids and some children like to be able to hold a bumper bar.

The shopping basket on the Qbit Plus is wide, but a bit shallow. While it appears to be shaped to avoid things falling out of it (and seems muscular in design), you’re not going to want to pile it high.

Provided that your changing bag isn’t too bulky, it would fit without an issue. The basket is attached to the footrest but there’s only a small gap between the seat and the rest, so your child is unlikely to step through and damage it.

How does the gb Qbit+ stroller fold?

The fold on the Qbit Plus is one of its best features. It's a true one-handed fold and a breeze to execute. You just press the two buttons on the handlebar to release and lower it in one fluid movement, then it locks automatically.

To release, you unclip the lock at the side, press the buttons, lift and check that everything has clicked securely into place. 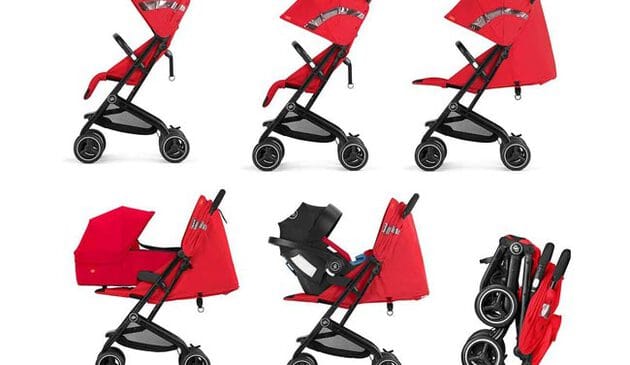 This buggy is a great solution for those short on space. It folds up small and can either lie flat once folded or be left freestanding.

It fits into the footwell of a car if needed and won’t monopolise room in your boot. It also fits comfortably in any porch or cupboard, but it’s not one to take as carry-on luggage – though it would be more than fine as a travel option that you check in.

The gb Qbit Plus All-Terrain comes in five colour combinations, ranging from neutral to ultra bright.

Our tester tried laguna blue and called it fun (her daughter certainly liked it!), but acknowledged that it wouldn’t be for everyone.

This buggy is certainly a head-turner though and could be picked out of a crowd if ever needed. The fabric feels mid-range in terms of quality, but durable overall.

The fabric covers are washable at 30 degrees. Everything unbuttons so it’s not too much of a faff, but it’s involved enough that most users wouldn’t want to repeat frequently.

This is unlikely to be necessary as the Qbit Plus cleans up well with a good wipe as our tester discovered after successfully removing mud after an adventurous ride.

She also found it washed brilliantly after pouring a cup of orange all over the seat.

Overall, we think the gb Qbit Plus All-Terrain stroller is a great choice for a lightweight buggy you intend to take into a range of situations.

It’s ability to cope equally well with cobblestone, pavement and bumpy roads, as well as its quick fold and unfold mechanism, also make it a fantastic city choice.

It’s on the lower end in terms of price yet has a long age span and high functionality. You could use this as your only buggy and it would meet the challenges of the day-to-day. At the same time, it would be easy to take travelling, making it a good all-rounder for the price.