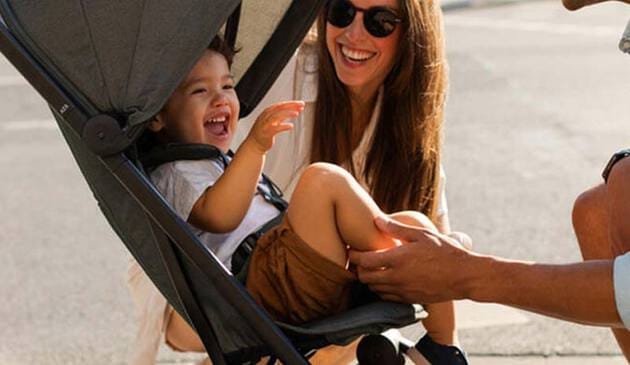 Key features of the Joolz Aer

The Aer is a new release from the highly-regarded German brand, Joolz, and the most lightweight model in their range. It’s presented as the buggy you move onto or add to your collection if you’re looking for something small and quick to zip around town with or to take on holiday.

While it isn’t suitable for babies younger than six months, from that age it comes into its own as a highly functional, compact option that can easily be tucked away or carried wherever you are, while giving the smooth ride users expect from Joolz.

The wheels are high-quality, with grooves that help the buggy take on bumps with surprising ease. Our parent tester, Adele, took the Joolz Aer around a grassy park, along city pavements and on country walks.

She found the buggy easy to bump up the kerb, but a bit wobbly if turning sharply or taking on a kerb quickly, especially if one-handed (which probably isn’t advised anyway).

This could be down to the shape of the buggy as it’s narrower in width at the back. While she didn’t feel this was a safety issue, she felt she needed to approach sharper movements with a bit of thought. Its narrow design is easy to manoeuvre though and, on the whole, means the buggy turns beautifully.

As such, the Aer coped well with alighting and disembarking the bus, managing the gap with no problem at all. It’s light in weight at only 6kg and, though it doesn’t have an integrated carry handle, it has lots of places to grab onto as well as a removable carry strap, which also makes it easy to carry up and down stairs.

To recline, you unzip the back of the pushchair and loosen or tighten straps to the side. The straps determine the recline position. The mechanism is reasonably smooth and undoubtedly secure. However, it would be awkward to unzip while the child is asleep in the pushchair unless they were a really deep sleeper.

Returning to an upright position could also prove challenging with a passenger onboard. Bear in mind that the Aer doesn’t lie flat. While it reclines enough for comfortable sleeping, some parents might prefer a buggy with a deeper recline. 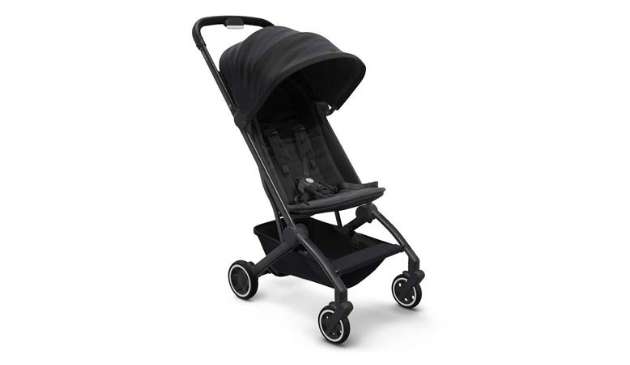 The Joolz Aer comes straight out of the box ready to unfold and go, with no assembly needed. The box is itself a Joolz feature, with eye-catching instructions for turning it into a toy airplane for your child.

Its accompanying instructions are minimal, but adequate and clear. Visual assembly instructions are available on the Joolz YouTube channel if needed and are straightforward to follow. The care instructions also couldn’t be simpler as they are presented in bullet-point form.

Attractively, Joolz offers a lifetime warranty on the Aer to make sure you get even more value for your money.

For comfort, the seat is generously padded, a detail buggies of a similar size often skimp on. It’s worth noting that the seat is unusually long and well-suited to a tall child. Adele found the seat had lots of space around the sides for her three-year-old, who wouldn’t outgrow it any time soon.

The handlebar is covered in leatherette for the comfort of the user. It isn’t extendable, but proved a suitable height for both the taller (6’1”) and shorter (5’6”) parent in our tester’s family. Neither found they needed to compensate while pushing by bending or stooping.

Rather, the Joolz Aer pushes very smoothly, with no undue effort expended in pushing at all.

How safe is the Joolz Aer?

Our tester’s overall impression of the Joolz Aer is that it’s engineered to a very high standard. She hung her changing bag on the handlebar when her three-year-old was sitting in the buggy and asked her to jump out. In both instances, the Aer stayed put.

Adele also found the five-point harness exceptionally simple to use. All buckles clip in separately, which makes it very easy to work out what goes where and means there’s nothing fiddly to contend with. You just pull the straps at the shoulders to adjust, which is both smooth and straightforward to accomplish even in a rush. The straps sit snugly so there’s no worry that your child might wriggle out and make an escape.

The brake feels absolutely secure. Set between the two back wheels, the user’s foot doesn’t have to fit into a small space when braking as with similar-looking lightweight buggies like the gb Pockit Plus All-Terrain, which we also put through testing.

Our tester found the brake easy to operate and had no concerns when running a hill-stop test. Since it doesn’t require kicking to release, it doesn’t present any issues for open-toed shoes.

When it comes to sun protection, the Joolz Aer is fitted with a generous UPF50+ sunshade which unzips to offer even more protection, revealing breathable mesh that allows you to see your child. Our tester found it shaded her three-year-old well from the hips upwards.

The footrest is roomy and sturdy enough to be considered a notable feature of the Joolz Aer.

A thin pocket at the back of the seat also offers a handy place to keep your phone and keys – and maybe passports and boarding passes at the airport if you plan to take the Aer on holiday.

There’s also a bumper bar for younger babies to give added peace of mind and a carry bag for storing the pushchair when folded, a particularly useful addition when travelling.

The rain cover covers everything on top and in front effectively during a downpour, and folds up small to fit in the pouch at the back of the seat (if you’re not already using it) or in the main shopping basket. When needed, you just Velcro it onto the buggy without any hassle.

Many will also appreciate Joolz’s other eco features. In addition to fun, reusable packaging, the black option is made from recycled plastic bottles found in the ocean and, for every pushchair sold, Joolz plants a tree.

The shopping basket on the Joolz Aer is outstanding and it was one of the main things our tester noticed on first impression.

Its deep scoop shape ensures things won’t fall out and you can fit two small carrier bags worth of shopping in there, in addition to an average-sized changing bag. It’s also quite sturdy and feels like it could take a good weighing down.

This is a buggy made for shopping with an overall storage capacity of 5kg.

How does the Joolz Aer fold?

As well as being awarded Best Luxury Lightweight Buggy 2020, we’ve also selected the Joolz Aer as this year’s easiest to fold.

It’s a dream to fold and unfold one-handed in one fluid movement, which makes it particularly useful to store and to use on public transport.

The mechanism is incredibly intuitive – you simply press two buttons on the handlebar, then lift and click to unfold, or collapse then click to fold. An automatic lock clicks on one side once the buggy is folded, which means it’s ready to carry straightaway.

Without consulting the instructions beforehand, our tester was able to quickly get to grips with the folding function. 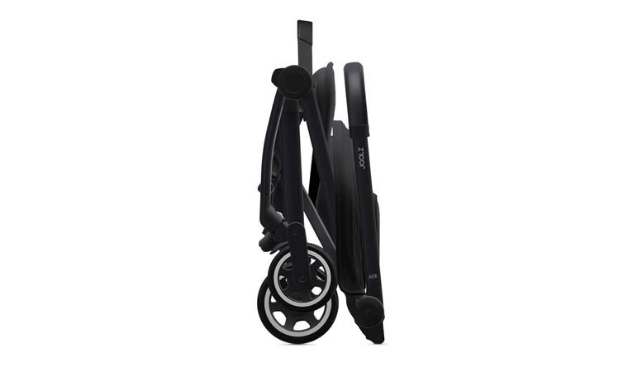 In terms of size, the Aer falls in the middle of the range when compared to the 11 other buggies we tested.

It can fit in the footwell of an average-sized car, but it doesn’t fold as flat as super small travel-specific pushchairs like the gb Pockit Plus (mentioned earlier). It also won’t monopolise space in your car boot, taking up much less space than an umbrella-fold buggy or the average travel system.

You have a choice of collapsing the buggy flat or leaving it freestanding, depending on the space you’re fitting it into. It’s ideal for small apartment living, carrying up long flights of stairs or storing in a small car.

It’s also small enough to operate as a carry-on though you’ll want to check with your airline first. Our tester found it unobtrusive on bus rides both folded and unfolded.

The Joolz Aer is a seriously stylish buggy. From the lines to the leatherette on the handlebar and bumper bar to the fabric, everything feels like premium quality.

This buggy doesn’t just look good, though. Both soft and practical, our tester put it through its paces over a whopping 50 miles and there were no signs of wear and tear after testing was complete.

It also comes in three colours: green, grey and black. While that doesn’t offer parents a lot of choice, the options are classic and neutral enough that they’re likely to suit many.

How easy is the Joolz Aer to clean?

Like a lot of lightweight buggies, the Aer is handwash only. To clean, you wipe the fabric with lukewarm water and soap, rinse with fresh water and then leave to dry.

While our tester found that this method cleaned it effectively, some users might prefer to be able to completely remove the cover and give it an immersive clean, which isn’t possible with this model.

That said, the fabric is water-resistant and doesn’t attract stains or dirt so you’re unlikely to feel the need for a deeper clean than handwashing is able to give.

In this case, the challenge was to combat spilled juice and smears of mud.

If you’re looking for a smaller main pushchair from six months on without compromising on the smoothness of the ride, the Joolz Aer might be for you.

The basket in particular will appeal to those who like to load up with baby essentials for a day out. If it’s purely a travel option, you might want something less expensive depending on how much travelling you’re likely to do.

At £389, it’s on the pricey side (as are the available accessories), but the quality justifies the price if you can spring for it. It really depends on what you’ll be using it for.

It fits nicely somewhere between a heavy-duty travel system and a tiny-fold micro stroller. So if looking for a compact high-end fold-up option, then the Joolz Aer could fit the bill.

We tested the UK's best lightweight buggies with busy mum-of-three, Adele, who used each buggy for at least seven days with her three-year-old toddler. We covered a variety of terrain over at least 80km with each stroller and tested them in six key categories: assembly, safety and stability, day-to-day use, cleanliness, aesthetics and value for money.