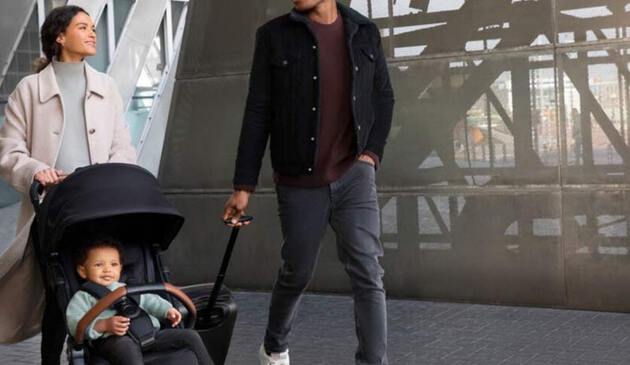 We have the Silver Cross Jet and it’s amazing!

What’s the Silver Cross Jet like to use day-to-day?

The Silver Cross Jet has had an overhaul for 2020 and, for an incredibly small buggy, offers a beautifully smooth ride thanks to its dynamic suspension.

Despite its small wheels, it also takes on bumps in the road and uneven ground surprisingly well. Our parent tester, Adele, took it off-roading, across grass and up hills, in addition to along the pavement and – apart from on the very bumpiest of surfaces – found it generally effortless to push.

The Jet is a particularly narrow model so gets through small spaces with ease and manages most doorways well, making it a brilliant option for city living.

We see this micro solution fitting unobtrusively in apartments, making it upstairs with ease and keeping well to itself on public transport. It steers responsively, taking on corners and sharp turns without any cause for concern and, for the person pushing, it crucially requires no postural adjustment.

Bear in mind that the five-point harness can be a little fiddly to clip into place – you have to press the release button on the buckle and push the points in at the same time – but this won’t be a problem once you’ve sussed it. Rather, it’s something to be aware of if you’ll be sharing this buggy with a grandparent or a babysitter.

The Jet’s brake is an interesting feature of the model and one that Adele particularly enjoyed. It can be activated by stepping your foot onto the right side and released by stepping onto the left – usefully marked using a red and green colour scheme and ideal when wearing open-toed shoes.

It also means that there’s no confusion about whether the brake is on or off. The mechanism feels secure, solidly staying put on hills with no unprompted releases.

Out of the box, the Jet requires minimal assembly and no tools for set-up. It took our tester just five minutes to get the buggy ready to go as all she needed to do was to slot the wheels into place.

The visual instructions are clear with reminders to keep listening and feeling for the clicks as you open the model up. They’re also downloadable from the website.

It’s worth noting that the Jet’s bumper bar is unusually easy to attach and remove. A child wouldn’t be able to operate it, but this will likely be a welcomed feature for most parents.

The buggy also comes with a lengthy three-year warranty.

The Jet is well cushioned and supportive, ideal for longer rides. It’s reasonably cocooned for a newborn, but bear in mind that it doesn’t have the option to go parent-facing.

You can, however, attach a car seat to turn it into a travel system, but most parents will prefer to hold off on making the Jet their main buggy until the toddler stage. It’s an ideal travel companion, though, so don’t be afraid to have a look sooner if you’re wanting to jet off somewhere warm in the future.

With that said, our tester felt this buggy didn’t leave much room for her three-year-old to grow. However, it's generally a comfortable size for the age range considering her passenger is at the top end of it. Parents looking for a buggy with a longer age range for reluctant walkers might prefer the Babyzen YOYO² or the Baby Jogger City Tour 2, both of which also performed well during testing.

The Jet's handlebar isn’t extendable, but proved a good height for both parents in our tester family (5’6” and 6’1” respectively) and was one of the highest handlebars we tested this year. It’s covered in leatherette, which is comfortable to grasp, and it’s also water-resistant so there’s no chance of a soggy push during a downpour.

The leg rest is extremely simple to adjust with a gentle squeeze then push or lift. Our tester’s three-year-old still used it when out and about in the buggy, but Adele felt it might be better suited to a slightly younger child.

She loved the sunshade though and found it both generous and effective. While it doesn’t extend, meaning a toddler’s legs are left exposed, Adele felt it still offered enough protection and would cover a smaller child fully. 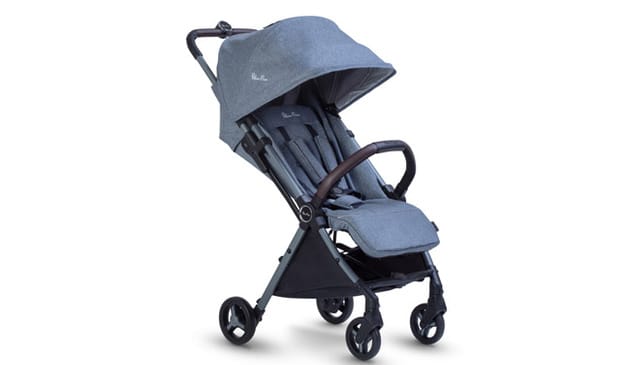 How safe is the Silver Cross Jet?

Sometimes when lightweight buggies are narrow, they can be unstable and easily lose their balance. This isn’t the case with the Jet.

Our tester hung her changing bag on the Jet’s handlebar to observe how it performed during a topple test with her daughter in and out of the seat, and in both instances the buggy remained firmly upright.

The seat can be reclined all the way down to a lie-flat position using a strap mechanism, allowing for approximately four positions. It can be a little awkward to push into an upright position when a child is sitting in it and care would have to be taken not to wake a sleeping passenger while reclining. But, overall, the recline is smooth, secure and easy to accomplish.

When it comes to the harness, it can easily be adjusted to fit snugly and securely by undoing the buckle and feeding the straps through the loops at the shoulders. Assuming you’ve fitted this beforehand, everything’s ready to go in a rush as the buckling itself is straightforward with not fiddly bits. It’s also a five-pointer for added security, which most parents will appreciate.

A mesh air vent at the back of the seat allows for cool air circulation in hot weather. A peek-a-boo window at the top of the sun hood also gives parents peace of mind, allowing them to check on their child while walking.

All in all, the Jet is a sturdy buggy and was more than strong enough to hold our tester’s bouncing three-year-old during our rigorous testing period.

The Jet’s bumper bar is an exciting feature. When folded, it can either remain attached to allow the buggy to be pulled along like a small suitcase or it can be quickly removed and slipped into the accompanying storage sleeve to save some space.

The rain cover just requires slipping on and Velcroing at the bottom, with a handy slit for the handlebar to go through so that it covers the buggy completely. Adele found it took a little figuring out and wasn’t included in the instructions, but she found it straightforward once she’d sussed it.

While the Jet does boast a handy protective sleeve to store the bumper bar, our tester found the 1kg capacity shopping basket to be small in contrast to most of the other buggies she tested, especially the Micralite ProFold.

While it would fit a change of clothes, some snacks, a water bottle and a book (or a toy or two), getting a bulkier changing bag into it could be awkward depending on shape – the basket is narrow and has a bar cutting across it at the back, which means you'll want to access it only from the front.

Adele tested it with a larger changing bag (38 × 19 × 48.9cm) but felt that a smaller changing bag or a few essentials tucked in for the day would fare better.

How does the Silver Cross Jet fold?

The Silver Cross Jet has a unique fold, which can be accomplished by pressing two buttons on the handlebar before pushing a lever up with your foot to release all parts of the pushchair.

It folds both inwards and downwards, making it very small when collapsed – a big bonus for those who plan to use a buggy when travelling. But our tester found she needed to push the buggy down and listen for a final click when folding to make sure that everything locked into place, which didn’t always happen right away.

You also need to check that everything clicks into place when unfolding. The clip at the side is automatically engaged when folding but needs to be manually released when unfolding.

This movement isn’t one-handed and it takes a bit of practice for folding to become a seamless movement, but it’s simple once you know how.

There are easier models on the market to collapse, such as the Joolz Aer, but the beauty of the Jet's design is that it allows the buggy to act as a genuine carry-on suitcase with the bumper bar acting as the pull-along handle. 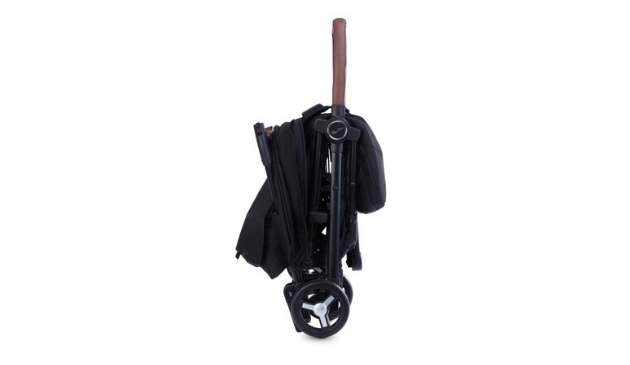 A real triumph of the Silver Cross Jet is that it folds up small. It touts itself as meeting airline standards as a carry-on and the removable bumper bar that tucks into the protective sleeve when folded is an excellent touch.

The buggy’s size won’t be an issue in any car boot as it’s both narrow and flat when folded, allowing extra space for any other gear you might be carting about, whether a backpack for a long day out or a travel cot for a weekend break.

Once folded, the Jet can either be left to stand by itself or lie flat depending on the space you’re fitting it into. Adele tucked it into her car boot, front porch and even her coat cupboard with lots of room to spare.

Like other pushchairs in the Silver Cross range, the Jet is classic, simple and understated. The materials feel middle of the road, but the handlebar and bumper bar are covered in leatherette which give them a high-end feel.

The Jet comes in three colour choices – ocean, silver and black – which are neutral enough to suit most, but Silver Cross unfortunately doesn’t offer a huge variety.

The Jet scrubbed up well after being wiping clean with a cloth and left to air dry as per the instructions.

Like most lightweight buggies, it isn’t machine-washable and the seat cover can’t be removed, which might be a deal breaker for some. Still, our tester found it didn’t attract or show up dirt and it passed the sippy cup spillage test with a good rub.

At the end of our test period, the Jet still looked in good nick, suggesting that it would hold up well over time.

At £275, the Silver Cross Jet is definitely on the more expensive side of things, but it's a birth to three option that can be used both day-to-day and during overseas holidays.

Considering that many parents would want a parent-facing carrycot option, the price would need to be factored in as the Jet is more likely to be bought as a follow-on buggy.

The smaller, slightly awkward basket may also bother those who like to load up their pushchairs, especially with a younger baby in tow.

Overall, though, the Jet is a highly innovative lightweight buggy that pushes beautifully. So, if it’s in your price range, we think it’s well worth the dosh.

We tested the UK's best lightweight buggies with busy mum-of-three, Adele, who used each buggy for at least seven days with her three-year-old toddler. We covered a variety of terrain over at least 80km with each stroller and tested them in six key categories: assembly, safety and stability, day-to-day use, cleanliness, aesthetics and value for money.