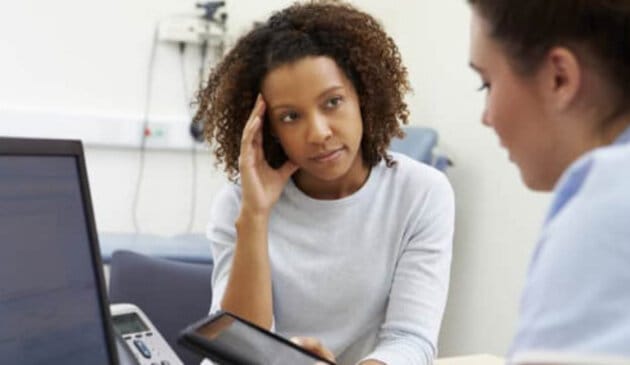 What causes bleeding in early pregnancy?

Vaginal bleeding can be triggered by the changes in your hormones during your menstrual cycle, which can cause breakthrough bleeding around the time you would usually have your period. This may occur a few times throughout pregnancy, particularly in the first weeks, and is likely to be accompanied by common period symptoms such as cramps and feeling bloated.

I had bleeding a lot through my first pregnancy, which turned out to be nothing, but I would give your midwife or maternity unit a ring to be on the safe side, or to give you peace of mind.

During very early pregnancy, implantation bleeding can also occur – this is when the fertilised egg is being implanted into the lining of the uterus, and you may experience mild cramps alongside light bleeding or spotting.

Other things which may cause bleeding or spotting in early pregnancy include:

Spotting is usually very light vaginal bleeding – it's fairly common in early pregnancy. Blood can be red or brown, and occasionally it's heavier, like having your period. The amount of blood you pass is important – spotting will be lighter, but more serious bleeding will be like a very heavy period, and could include passing clots.

I bled during both my pregnancies – it was so heavy that I was convinced it was all over. I never found out the cause, but both daughters were born fit and well.

Spotting often turns out to be nothing to worry about, but during the first 12 weeks of pregnancy vaginal bleeding can be a sign of miscarriage or ectopic pregnancy. This certainly isn't always the case, and plenty of women who experience bleeding in early pregnancy go on to have healthy babies, but put your mind at ease by getting it checked by your doctor or midwife as soon as possible.

When bleeding indicates a problem

Sadly, sometimes the baby doesn't develop properly in early pregnancy. These are some of the complications that can arise during a pregnancy and may be indicated by bleeding.

Symptoms of miscarriage include mild to severe stomach cramps, back pain, nausea and passing tissue or clots alongside bleeding from your vagina.

A threatened miscarriage occurs when a pregnant woman experiences bleeding and/or abdominal pain, but the pregnancy continues.

In my first pregnancy I had a small bleed and some spotting at around six to seven weeks. All was fine. At six weeks into my second pregnancy I had the same kind of thing, and sadly that time it was a miscarriage.

Less common than a miscarriage, 1 in every 80-90 pregnancies in the UK is ectopic. This occurs when the fertilised egg implants outside of the uterus, usually in the fallopian tube, where it is unable to develop.

Bleeding is a common symptom, and may be accompanied by severe pain in one side of the abdomen, feeling faint, and nausea. Ectopic pregnancies are serious and need to be treated as soon as possible, so if you are concerned, do not hesitate to contact a medical professional.

Rarer still is this complication, in which the fertilisation process goes wrong and causes abnormal cell growth in the placenta. About 1-3 in 1000 pregnancies are molar, and if this happens it is likely you will experience normal pregnancy symptoms early on, but spotting or bleeding will begin between 6 and 12 weeks.

Light bleeding in the second or third trimester is also common, and can be harmless, but it's still important to get yourself checked out.

These are some of the causes of bleeding in later pregnancy:

An uncommon but potentially serious condition, placenta praevia (or low-lying placenta) occurs when the placenta is situated low down on the uterine wall, occasionally over the cervix. It's likely you'll be informed if you have this condition at your 20-week scan so you can be monitored. Bleeding from a low-lying placenta can be heavy and endanger your baby, so it's possible you will be advised to go to hospital for treatment or to have a caesarean.

Another fairly uncommon condition, placental abruption occurs when the placenta partially or completely separates from the uterine wall, and symptoms may include severe abdominal pain and heavy bleeding. You are at more of a risk of placental abruption if you smoke, have high blood pressure, kidney problems or pre-eclampsia. You will be admitted to hospital for treatment.

In cases of Vasa praevia, the baby's blood vessels run through the membranes covering the cervix – normally these would be protected within the umbilical cord and placenta. When your waters break, these vessels may be torn and cause bleeding, and the baby may lose a lot of blood. This is a difficult condition to diagnose as often it isn't discovered until you are in labour, but it can be diagnosed before birth with an ultrasound scan.

Other causes of bleeding later in pregnancy

What to do if you experience bleeding during pregnancy 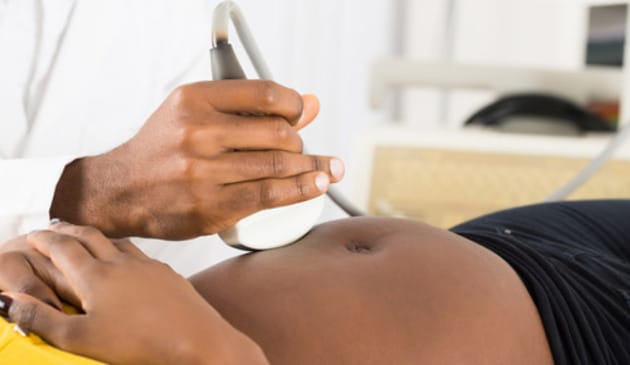 Don't be afraid to seek medical advice – call your midwife, GP or nearest antenatal unit. There's a chance they will want to perform an examination or ultrasound to rule out any possible problems, and they may take a blood test to check your hormone levels and rhesus status if this hasn't been done yet. If the bleeding is heavy or getting heavier, do call NHS Direct – you might be referred straight to the hospital to check everything is OK.

Every time I've had any bleeding I've always asked for a scan – you are entitled to it, and you will only know the outcome by having a scan. Don't worry and suffer alone.

You should be given an emergency scan if you are experiencing bleeding after previously having had an ectopic pregnancy, or if you have sharp one-sided abdominal pain and/or pain in your shoulders.

Whilst you definitely should tell a doctor if you experience bleeding, you may be told to ‘wait and see' if it's quite light, or if it's very early in your pregnancy (making it hard to see anything on a scan). This can be distressing, but take some comfort in the fact that your baby is likely to develop perfectly well.

If the bleeding gets worse, contains clots, or you also start to experience cramps, backache or period type pains, contact someone immediately and explain the situation.

Is there anything I can do?

Not really – although it's likely that you'll want to take it easy if you're bleeding. Sadly, if the bleeding is due to a miscarriage, it is very unlikely anything can be done (the exception is if you are very close to full term).

Make sure you get plenty of rest, do what feels right for you and be kind to yourself – and don't be afraid to ask for advice from your healthcare provider if you need it.