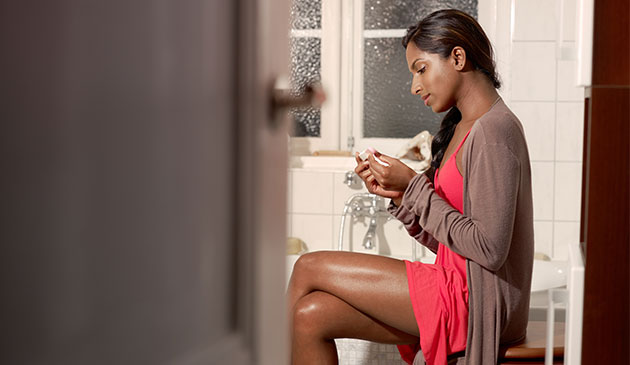 Hormonal changes in the first week or two following conception can cause lots of early symptoms that might just tip you off before you've been anywhere near a pregnancy test.

It's important to note that not all women will experience (or notice!) them, though. Early symptoms before a missed period might include: 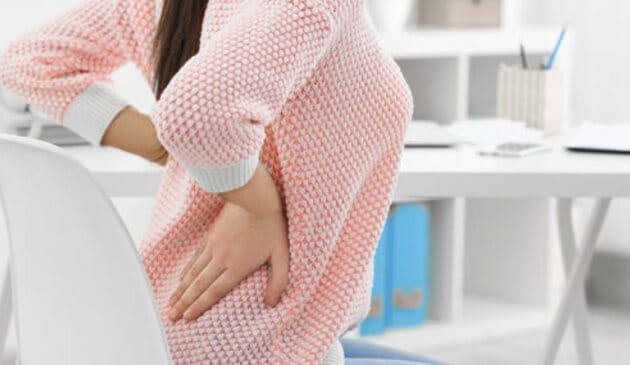 Confusingly, lots of these symptoms could just as easily be signs of your period arriving, and there's no way to be certain until you get that positive result from a test. However, some women report 'just knowing' they were pregnant and even being aware of when the embryo implanted.

Early pregnancy signs according to a midwife

When it comes to spotting the signs that you might have a new womb-mate (sorry, we had to), who better to give us the expert low down than a midwife? Clare Littler, aka Mumsy Midwife, let us in on the tell-tale signs:

Surprise – at week one, you're not, strictly speaking, pregnant yet, since pregnancy is counted from the first day of your last period. It all sounds more complex than it is but if you want clarification you can use the date of the first day of your last period to work it out on our due date calculator. Since you ovulate about two weeks after the first day of your period, the egg won't actually reach your uterus until the third week, when conception occurs. But in this first week after conception (which is actually week three – still with us?) you might notice small changes that are a clue that sperm has met egg.

What pregnancy symptoms before a missed period do you get?

You may experience any of the following. Do remember, though, that many women don't notice any of these at all:

By the time you reach the end of the 'two-week wait', if you hit the jackpot you're four weeks pregnant. On or around the time your period is due, you might experience some of these common symptoms:

I had period-like cramps, ironically. I was down in the dumps because I thought my period was on the way. But it never surfaced and I did a pregnancy test instead.

By this stage you will hopefully have a positive pregnancy test in your hand – you're officially five weeks pregnant now and an old hand at all this. Around this time women often report some of the following symptoms: 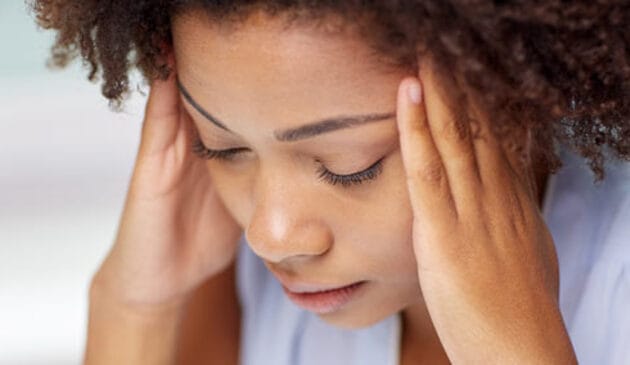 How soon can you find out if you are pregnant?

You can take a pregnancy test the week after your missed period, which will give you an accurate result. If you can't wait that long, you can take one a couple of weeks after having sex, but may not get a reliable result. The good news, however, is that a positive result during this period is much more reliable than a negative one, so be sure to take another test after your missed period, just to be certain. If you’re finding the not knowing agonising, read more about the two-week wait and early symptoms to pass the time.

When do pregnancy symptoms start?

The very earliest you are likely to experience any signs of pregnancy is when the embryo implants around five to 10 days after ovulation. If you listen to the apocryphal tales, however, there will always be someone telling you they ‘just knew’ they were pregnant, practically before they’d put their underwear back on.

Some symptoms of early pregnancy sound utterly baffling but plenty of women report the same weird and wonderful experiences. We asked a midwife about some of the more outlandish among them:

These are a few common, but nonetheless strange, signs of pregnancy:

I was so tired I kept falling asleep during the day.

Can symptoms of pregnancy come and go?

Yes. It’s actually quite normal and your symptoms could change week by week. Hormone levels are fluctuating and your body is getting used to them and then needing to ‘catch up’ again.

It’s true that often when you have a miscarriage your symptoms of pregnancy will disappear, but it also happens often for no reason whatsoever, so unless you have other cause for concern it’s best to try not to worry. Easier said than done, we know.

Could I be imagining my symptoms?

Yes, unfortunately. If you’re trying to conceive, you obviously are hoping to notice symptoms and it’s very easy to get carried away and convince yourself you are pregnant. It’s also true that early symptoms mirror the symptoms of PMS (nausea, cramps, light bleeding, feeling emotional) and it’s virtually impossible to distinguish between the two because of the pregnancy hormone, progesterone, which is present in higher levels in the period following ovulation – whether you are pregnant or not. Think of it as nature’s somewhat annoying way of keeping you on your toes (or just prolonging the agony).

Could I be pregnant but have no symptoms?

It’s entirely possible to have few or no symptoms of pregnancy, or for symptoms to be very mild. Lots of women have no real symptoms until around week eight and then they disappear again as soon as the placenta kicks in, not long after. If you’re just a bit run down anyway, you could easily miss signs that hint at pregnancy. 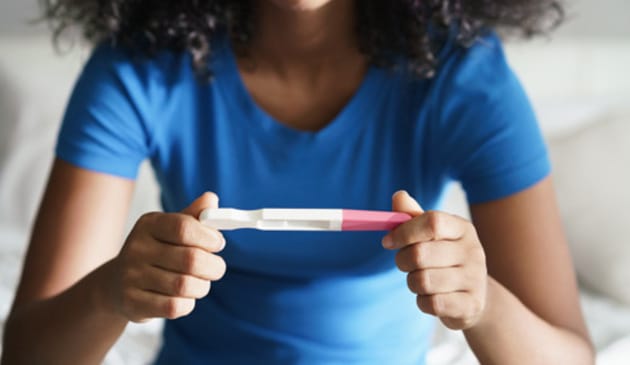 Bear in mind that not everyone is reaching straight for the sick bucket and sleeping the clock round moments after the egg is fertilised. Just think how many women get to the second trimester with no idea they were pregnant at all!

It’s understandable to worry if you’ve got a positive pregnancy test but, weeks later, feel no different. Talk to your midwife or GP if you’re really concerned, but otherwise just try to think that you’re one of the lucky ones.

What twin pregnancy symptoms should I look out for?

If you have twins in your family you may be keen to know not just whether or not you are pregnant but also exactly how many bundles of joy you have in there (pray for no more than two… three at a push).

Antenatal care for twins also differs slightly from singleton pregnancies so it's good to have an early heads up of any extra appointments.

Get weekly insight into your pregnancy and baby's development

Mums of twins usually report the same sorts of symptoms but they may happen earlier and with more 'force' than they do otherwise, as hormone levels rise more quickly. So rather than feeling a little nauseous you might be sick as a dog quite early on, and instead of feeling like a nap wouldn't hurt you fall asleep face first in your dinner. You might also find you get a positive pregnancy test a little earlier than expected. If your symptoms seem a bit more 'dramatic than the average, especially if twins are in your family, it's worth mentioning when you visit your GP or book in with the midwife.

Can symptoms tell you whether you are having a boy or a girl?

No, but it is fun to try guessing! Lots of women anecdotally report having more sickness with a girl than they did with a boy, which is thought to be because of the slightly increased levels of oestrogen when carrying a girl. But if you’re much more sick in this pregnancy than during a previous one, chances are the only thing it might ‘mean’ is that you’re carrying twins.

Here are a few more old wives’ tales (just for fun) about symptoms that are said to indicate the sex of your baby in early pregnancy:

And finally, our favourite…

Like we said, fun to think about but don’t go putting any money on it.

How can I know for sure I’m pregnant?

A pregnancy test (either a home pregnancy test or one carried out by your GP) is the only way to get a surefire answer, especially if your periods are usually irregular, in which case a missed period could be hard to spot. It’s easy to convince yourself you’re pregnant when in fact all your ‘symptoms’ could simply herald the arrival of your period. If you get a negative pregnancy test and your period doesn’t arrive, repeat the test a week later.

If you have a positive pregnancy test, congratulations! Time to start reading up on the dos and don'ts of pregnancy, continue taking your folic acid and perhaps, rather excitingly, start sharing tips and stories with other women at your stage of pregnancy in Mumsnet Talk’s birth clubs.

Try to see your doctor or a midwife as soon as possible – the first of your antenatal appointments is known as a booking appointment and usually takes place between eight and 12 weeks. At this appointment, you’ll be asked a lot of questions about your health and cycle, and given information about screening and scans.

What are signs of ectopic pregnancy?

An ectopic pregnancy, where the fertilised egg implants outside of the womb, is not very common but it's worth being able to recognise the symptoms so you can seek help quickly. If you have a positive pregnancy test or symptoms that make you think you might be pregnant, plus any of the following, it's worth getting checked out with your doctor.

Mumsnetters describe their symptoms of pregnancy

Find out which other symptoms Mumsnet users have experienced.