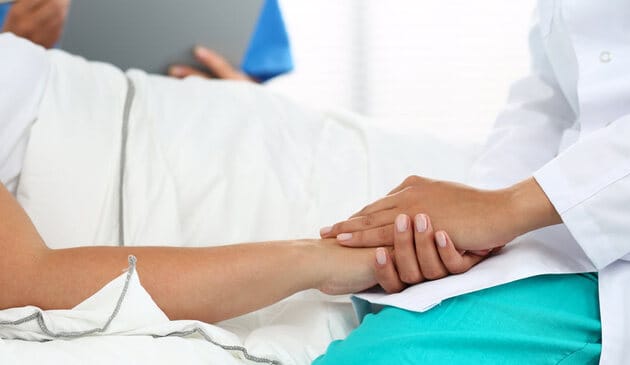 Around three-quarters of miscarriages occur in the first three months of pregnancy – and the actual numbers are even higher as some women miscarry before they realise they're pregnant. No matter how many weeks pregnant you are, a miscarriage can be a huge loss.

There are three types of early miscarriage:

Every miscarriage is different, and they're very painful for some women, but not for others. It's common to experience heavy bleeding (possibly passing blood clots) and have strong, period-like pains.

If you have three or more miscarriages, it's diagnosed as recurrent miscarriage.

What to do if you think you're miscarrying

Vaginal bleeding is quite common in early pregnancy so it can be a very confusing time – is it a miscarriage or isn't it? What do you do and where do you go?

First off, ring your GP, your midwife or your hospital for advice. If it's available in your area, you may be referred to the Early Pregnancy Assessment Unit (EPAU) of your nearest hospital. You'll probably be offered an ultrasound scan to confirm if the miscarriage has actually taken place.

Be prepared for what can seem like endless waiting – waiting for a scan to get the definitive diagnosis and waiting for your body to let go of the last of your pregnancy.

If you're treated at an EPAU or hospital, the aim will be to prevent excessive blood loss and infection. If you're bleeding very heavily or feel feverish and generally unwell, make sure to contact your GP or hospital.

Severe pain that's only on one side can be a symptom of an ectopic pregnancy. This can be life-threatening, so it's essential to get medical attention immediately.

This procedure is sometimes known by the horribly clinical and insensitive term Evacuation of Retained Products of Conception, but after a campaign by Mumsnet and others should instead be referred to as Surgical Management of Miscarriage.

The dilation is of your cervix, so that your womb can be scraped or suctioned out to remove any remaining pregnancy tissue. A D&C is done under a general or local anaesthetic.

A D&C is more common the further along you are in your pregnancy, and is usually recommended for an incomplete or missed miscarriage. There isn't the same waiting that comes with a natural miscarriage, but because it's an invasive surgical procedure it carries a very slight risk of infection.

This is when nature is allowed to take its course. It's an option if you miscarry before six weeks, aren't in great pain, running a fever or bleeding heavily. Your womb discharges the pregnancy tissues or absorbs them.

If the uterus isn't entirely cleared, there's a risk of infection and you may need dilation and curettage (D&C).

Medicine that speeds up the natural process of miscarriage, without surgery, might be an option if you have had an incomplete miscarriage.

Side-effects may include pain, nausea, vomiting and diarrhoea. You're usually sent home to pass the last of your pregnancy, but some women may still require a D&C to completely clear their uterus.

Unfortunately, the reason miscarriages happen in the first trimester aren't usually identified. In most cases, the miscarriage occurs because the fertilised egg has not developed properly, or because the baby isn't developing normally.

“Many women feel frustrated that until you have had more than three miscarriages, there is no follow-up to try and determine the cause,” one Mumsnetter says. “Even though it isn't regarded as recurrent until three, I felt that there must be something wrong with my body that I couldn't hold on to these babies.”

Don't be surprised if friends and family come out with platitudes you find hurtful, or a doctor comes out with something along the lines of “you're young, you can have more”.

It can be helpful to talk to other women who've gone through the same thing, so consider having a look at our miscarriage talk topic to get support.

Trying to get pregnant again

Some doctors suggest waiting for your next period or any signs of infection before trying again to get pregnant, but not everyone agrees. One Mumsnetter says: “My husband was in the room with me when I asked how long we needed to wait before trying again and, with a slight twinkle in her eye, the doctor advised waiting until we got home.”

What Mumsnetters say about early miscarriage

“I discovered that I had a missed miscarriage at my 12-week scan. I would have been far more prepared for it had I realised that it was quite possible to be feeling all the symptoms of pregnancy and yet have actually lost the baby. As it was, it was just a huge and horrible shock at a time when I had hoped to see a scan and share the good news.”

“Women of our mothers' generation may just have thought they were having a late period. It's a form of progress in that the earlier we find out we're pregnant the better we can start to look after ourselves, but it does bring heartache with it.”

“I had a missed miscarriage. No one mentioned how I would feel after and particularly did not mention that hormones would cause random emotions, which of course they did. I went from being fine one minute to bursting into tears when I saw parent and child car park spaces.”

“I've had three miscarriages – two involved heavy bleeding, pain, the whole lot. The other one had no symptoms at all, tiny amount of spotting and no pain. I knew in all cases I'd miscarried as my breasts deflated immediately and I could touch them without pain.”

“If you're sent home to miscarry 'naturally', you need industrial-strength sanitary pads and someone sympathetic with you – you don't want to have to flush a baby away on your own, if it comes to that. Plus I'd stock up on ibuprofen or get the doctor to prescribe something stronger. The last thing you need is physical as well as mental pain.”

“Letting go of the idea that you're having that particular baby on that date is so hard. People tend to say things like 'I'm sure it'll be OK next time', but that's not the point. You wanted this baby. I also felt my husband didn't really feel the same way as I did, which was hard to cope with. He just thought it was a minor setback whereas I felt like everything was falling apart.”