Just got back from Slovenia Ljubljana, 4 day long weekend break.
Our NHS travel vaccination certificate was not accepted in a few places.

It was accepted by BA airline, at the airport, as part of the checking in process, but not at some restaurants and places of interest like entrance to castles.

We are also due to go to Lisbon next month. It doesn't say it's accepted there either.

Having googled it, the BBC says it's not. Or is but only in a few places. That's poor isn't it? I assume most places are just accepting it though. We we just unlucky that the few places were being pedantic? We argued the case and showed our recent test certificate aswell but they were insistent that their card reader / scanner couldn't accept it, so they couldn't let us in. 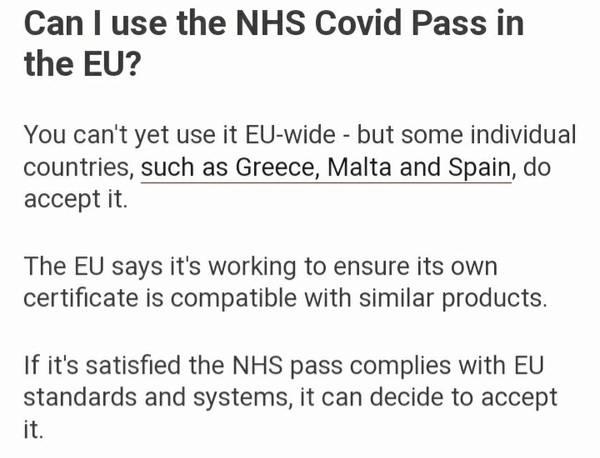 It’s the U.K. government to blame for this... Initially they refused to join the EU covid passport scheme. Apparently we are now on the verge of joining after all. Also remember in return, many fully vaccinated people from overseas have been forced to quarantine on arrival here in the U.K. even though they had the exact same vaccines.
I would keep an eye on our progress joining the EU covid pass as that is how this will be fixed. Some countries with a lot of U.K. tourists fixed it off their own bat (eg France) but apparently with little help from U.K. authorities.

Agree Texar. What a mess!

Are we joining? That’s good news. I’m British but was vaccinated in the EU and it’s been such a hassle.

You'll get fewer ads, be able to hide, watch and save threads for later, and access loads more customisable features