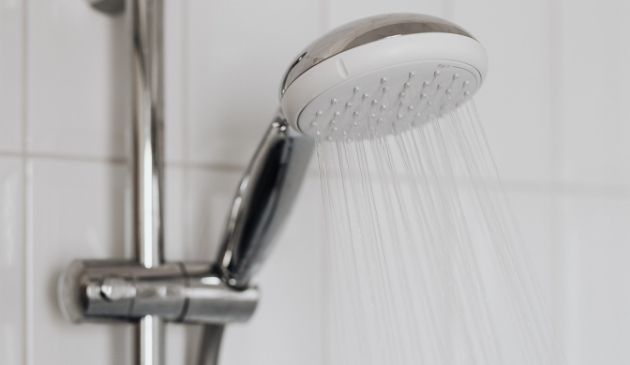 There are all sorts of shower heads on the market to suit any preference. Whether you prefer a fixed rainfall-style shower, a handheld option or even a dual unit, you’ll be able to find a solution that will make showering the best moment of your day.

Depending on the water pressure in your home, you may want to purchase a shower head that will help boost your pressure. Or, you could opt for a shower head that offers an adjustable flow, so you can massage aching muscles, have a gentle, relaxing shower, or anything in between.

We’ve trawled through hundreds of online reviews and recommendations from the Mumsnet forums to bring you our favourite shower heads for the perfect soak. 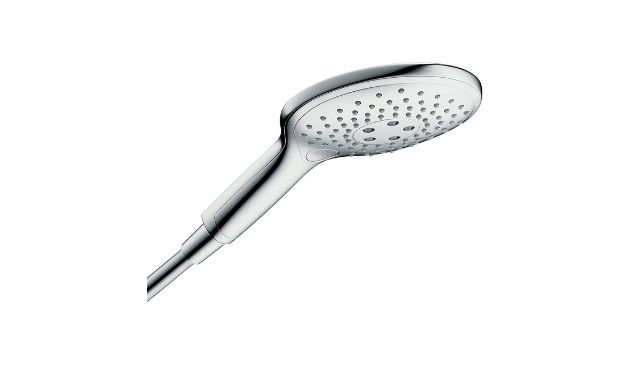 “We have a Hansgrohe rainfall head in our ensuite walk-in shower, and everyone loves showering in there.” - orangina01

If you’re lucky enough to have good water pressure in your home, we think the best shower head to buy is the Hansgrohe Raindance. It’s significantly larger than most other handheld shower heads, making it feel more like rainfall as you shower, but with the increased functionality of a removable shower head.

It also has three different spray settings so you can tailor your shower to your mood - choose either a relaxing rainfall setting, a more intense massage spray provided by rotating nozzles, or a mixture of the two. There’s an easy-to-use button to switch between the different settings so you won’t need to awkwardly attempt to rotate a slippery bit of plastic with wet hands.

The shower head even uses so-called ‘EcoSmart technology’ to help save water, which has both environmental and economic benefits.

Admittedly, the Hansgrohe Raindance is a bit pricier than some of the other shower heads we recommend but, for some, the quality and the large size of the shower head will make it worth the price. 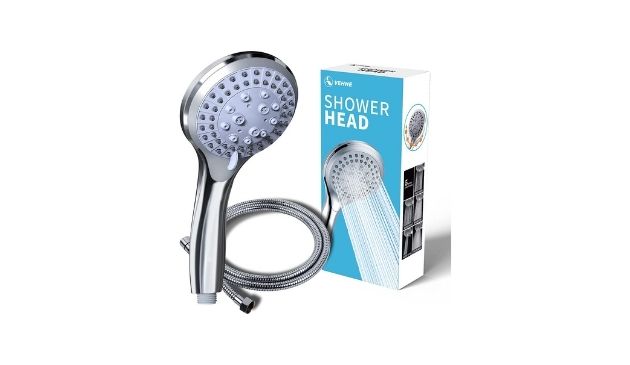 If you’re dealing with a smaller budget, this VEHHE Shower Head is a brilliant low-cost choice. Despite being budget-friendly, the shower head isn’t short of attractive features. It offers five different flow settings, including ‘power mist’ and ‘rain massage.’

The VEHHE Shower Head is also a great eco option, claiming to reduce water usage by up to 30 percent. Far from offering an unsatisfactory shower, it also claims to increase your shower’s pressure by up to 200 percent.

Buy now from Amazon
Related: The best shower squeegees for a streak-free shower 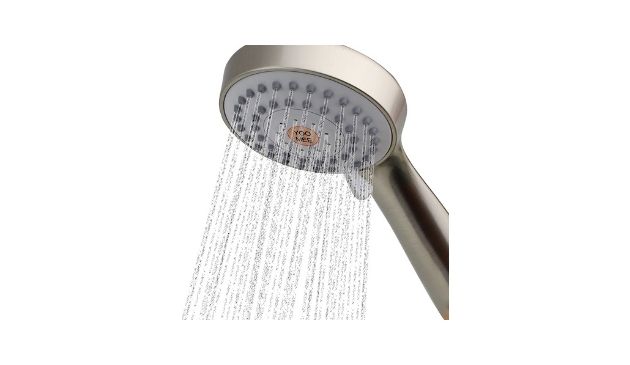 The YOO.MEE Shower Head claims to be the solution to low water pressure, and it has over 1700 five-star reviews to support this. Buyers report experiencing greatly increased pressure in the shower after installing this shower head, even going so far as to say it can rinse a head full of shampoo in mere seconds. 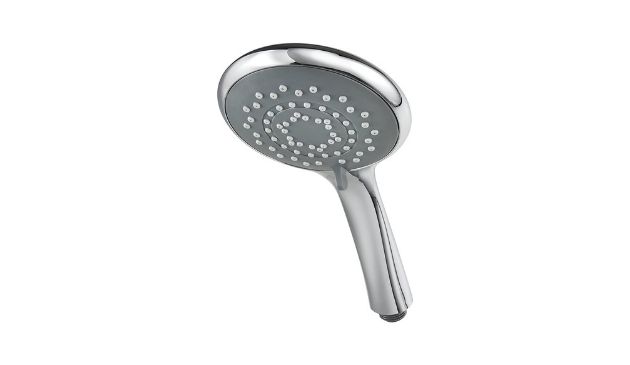 If you have small children or a dog, being able to remove your shower head from the wall might be a crucial feature for you. Handheld shower heads allow you to bring the water flow down into the bath to make showering easier, and also allow you to clean the bath itself more easily too.

The Triton High Flow Shower Head is the ideal handheld shower head in all sorts of ways. It’s a very reasonable price, looks simple and sleek, and has five different spray settings. So whatever you’re trying to clean, there will always be a setting to suit your needs. 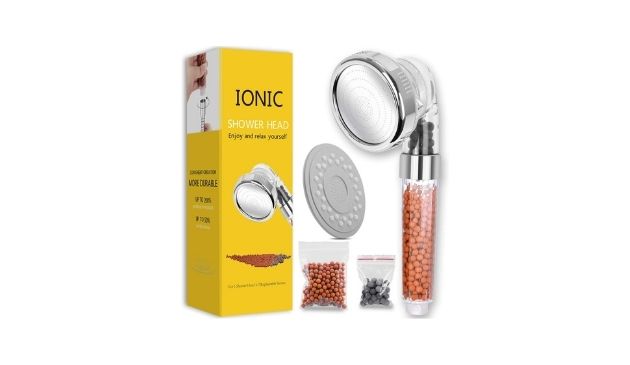 The Magichome Ionic Shower Head contains a filter to remove chlorine, fluoride, rust and other toxins from your shower water, which helps to balance pH levels to leave your skin and hair feeling smooth.

The shower head also claims to increase your water pressure by up to 200 percent, while simultaneously reducing your shower’s water usage by up to 50. Yes, it almost sounds too good to be true, but you’ll be pleased to know that these standout features are supported by an impressive collection of five-star reviews. 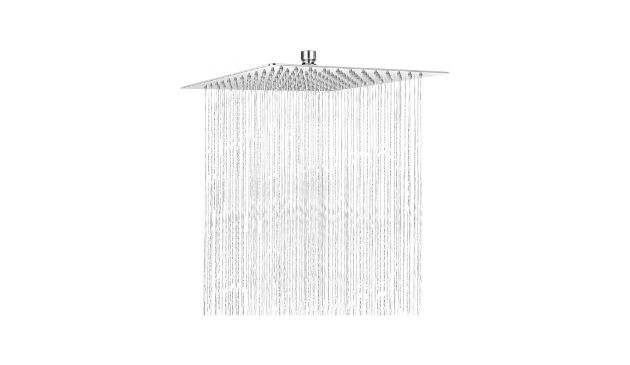 “We love ours. [You] get a proper drenching!” - dalrympy

Want to feel like you’re showering under a waterfall? A rainfall shower head is the answer! The COMLIFE Fixed Rain Shower Head measures an impressive 30cm across (or, if you’d prefer, it also comes in two smaller sizes), with 144 nozzles to offer an incredible showering experience.

The shower head’s size means it looks very striking, and will instantly upgrade your shower to make it look more modern. But far from being a case of style over substance, it also offers a high pressure spray, and the silicone nozzles mean it’s easy to keep clean and free of limescale. 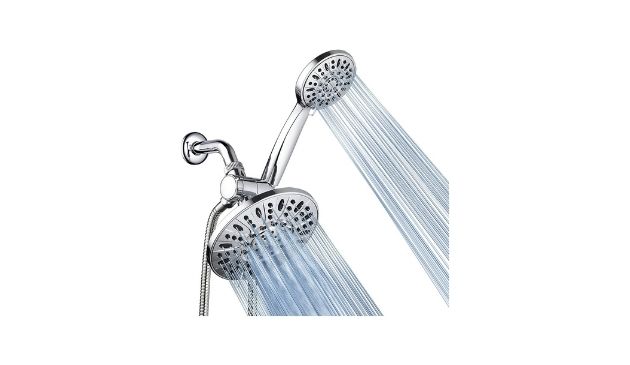 “We use the rainfall head on a daily basis here - and use the hose one for rinsing kids’ hair and the like.” - 5000KallaxHoles

If you can’t decide between a rainfall-style shower head and a regular handheld, a dual shower head is a great choice. The AquaDance Combo Shower Head offers two different heads, which can be used simultaneously or independently, giving you heaps of flexibility.

This shower head is easy to install and use, with a simple switch to swap between the different flow settings - of which there are six on each head. The different settings can be used in various combinations to give the perfect mix. So however you like using your shower, there will be a combination here that works for you. 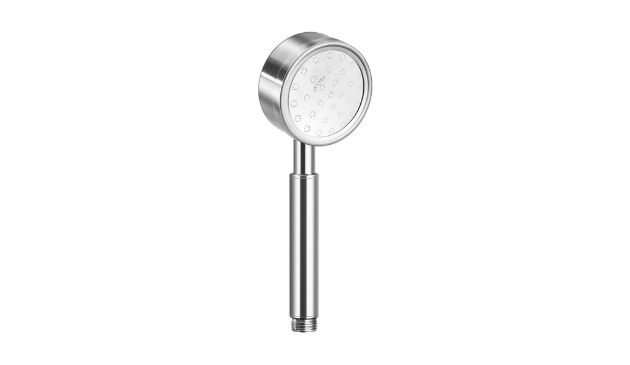 This Olliwon Shower Head claims to save water, using up to 60 percent less water than a typical shower head. The surface of the shower head is covered with over 300 high pressure jets, meaning you don’t lose any water pressure despite the lower water usage.

Unlike a lot of other shower heads, the Olliwon doesn’t have an adjustable water flow, which may be a negative if you enjoy regularly adjusting the settings. However, if you’re the type of person who rarely uses more than one flow option, this won’t be an issue for you.

Buy now from Amazon
Related: The best and most accurate bathroom scales

How to choose the best shower head

Here are a few things you might want to consider when choosing a new shower head:

When you’ve decided what criteria you have for your new shower head, check out our selections above, and find one that meets your needs.

What is the best shower head?

After delving through hundreds of products, and thousands of product reviews, the best shower head to buy is the Hansgrohe Raindance Select S Shower Head. While pricier than other shower heads, you can’t argue with its exceptional reviews. It pairs the luxury of a huge, rainfall-style head with the functionality of a handheld so you get the best of both worlds.

What is the best shower head to increase water pressure?

If you have problems with low water pressure, the YOO.MEE Shower Head is our favourite pressure-boosting option. 92 percent of the product’s reviews came with four- and five-star ratings (80 percent of reviewers gave five stars), which is one of the best sets of reviews we’ve seen. Purchasers of the shower head are thrilled with its water pressure-boosting functionality.

Because we know that there’s nothing like a real recommendation from a real parent, we first headed to the Mumsnet forums to find out which shower heads discerning Mumsnet users had bought for their homes.

We compiled a list of the shower heads they recommended for being the most useful and practical for everyday use.

We then did some research across the wider web, looking at which shower heads had won accolades or been featured in ‘best buy’ lists across websites and print media, and what customers’ reviews said about them.

Having collated all that information, we picked the shower heads we thought would make the best buys in several categories.