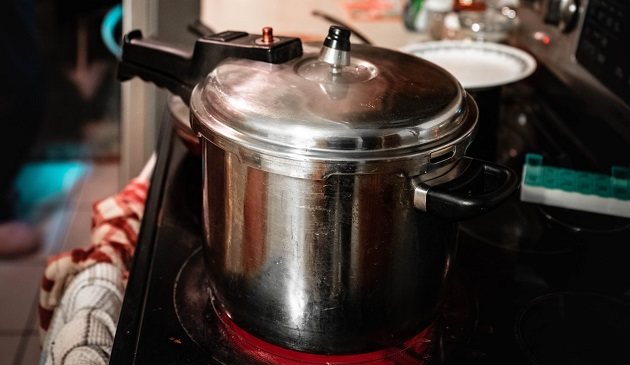 If you grew up in the seventies or eighties then chances are you have slightly terrifying memories of a pressure cooker ominously rattling away on the stove, making all manner of strange noises.

Such relics are mostly a thing of the past, but the concept of pressure cooking hasn’t gone away. It is, in fact, making a comeback as people look for more efficient cooking methods that give amazing results in a fraction of the time.

If this all sounds like gobbledegook then let us explain. Pressure cooking is unique in that it builds up steam pressure inside a sealed pot to force liquid into the food you’re cooking, which means it takes less time to make and more flavour is injected into your dish. Imagine producing a beautifully tender piece of meat within 20 minutes that tastes like it’s been slowly cooking on a low heat for several hours. Or preparing a whole chicken from frozen within an hour. All achievable with a pressure cooker.

There are two main types of pressure cooker that you can buy: electric or stove-top. Let us guide you through our pick of the best pressure cookers for 2021, as recommended by Mumsnetters. 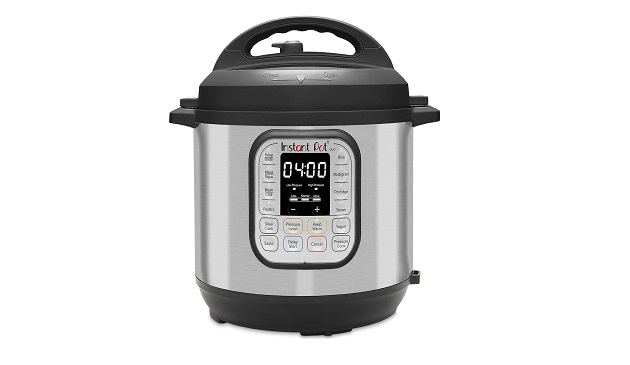 “I’ve got an Instant Pot. It’s brilliant. I love it.” DramaLlama12

“Another recommendation for an Instant Pot. I use mine most days. We had a gorgeous chicken, vegetable and noodle soup out of it yesterday evening. I simply put all of the ingredients in, set it for seven minutes and that’s it.” MadisonAvenue

“I think I love my Instant Pot more than any other household item.” Outaideas

Regular Mumsnet visitors will know that one of the most recommended products on our forums is the Instant Pot Pressure Cooker.

Available in three, six or eight-litre capacities, this whizz of a device does all the cooking for you, automatically adjusting temperature, pressure and cooking time to produce a variety of delicious meals in minutes.

The one-touch smart programmes mean you can set the cooker easily to tackle whatever dish you fancy that day. 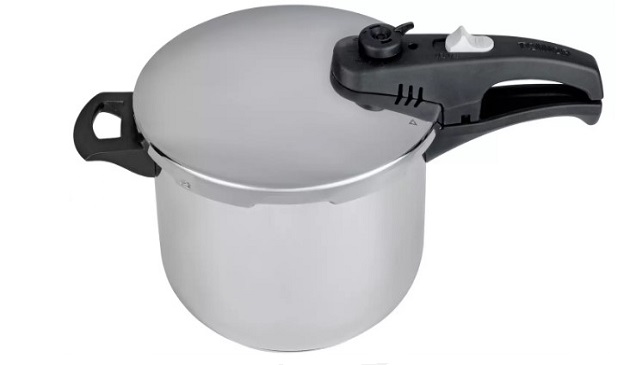 “I have had a cheap Tower pressure cooker from Argos. It’s been excellent and I have no complaints at all! I use it most weeks as a pressure cooker and also the large pan size is useful for cooking other things.” MissingFriendandSad

This stovetop pressure cooker from Argos works a bit differently to electric models. It takes its heat from your hob and produces the necessary steam to cook as quickly and effectively as its more expensive electric counterparts. It's compatible with all hob types and has a stainless steel interior for quick and easy cleaning.

Buy now from Argos
Related: The best BBQs for your garden 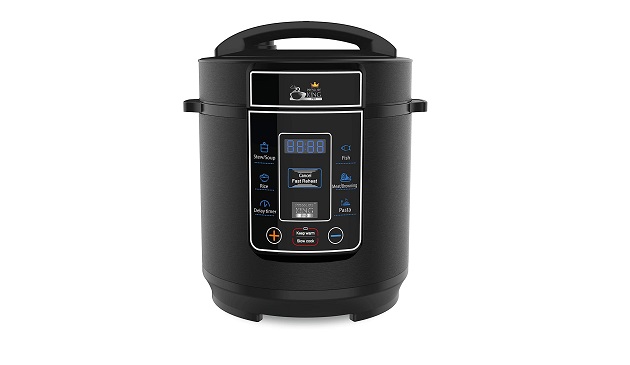 “The pressure king is bloody brilliant. I use mine almost daily (often more than once) and gave my slow cooker away after having it for a few weeks. Honestly the best piece of kitchen equipment I own. I would buy another without hesitation if it broke.” TinyTickler

“I love my PKP. I like how you can leave it after the timer ends, and it keeps warm for you until it’s time to eat. That way, it releases steam naturally.” WanderingJules

Mentioned on the Mumsnet forums almost as much as the Instant Pot is the Pressure King Pro, another outstanding performer in the world of pressure cookers.

Perfect for couples or small families, this compact little device is not only a pressure cooker, but also doubles up as a slow cooker as well. It has eight preset programmes, each perfect for a specific food type, be it rice or meat or soup, as well as a handy timer so you can set it to finish cooking just as you arrive home. 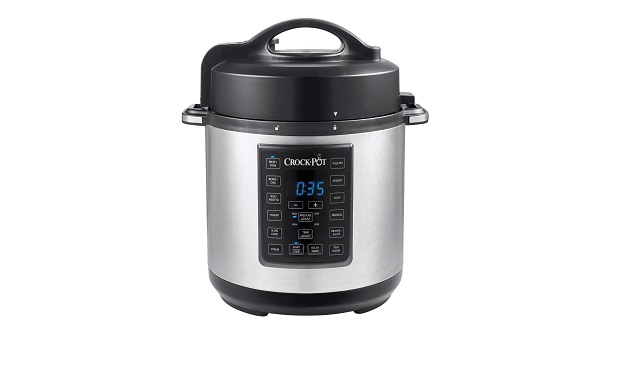 Crock-Pot is a famous brand in the world of electric pressure and slow cookers and this particular model is incredible value for money - ideal if you’re on a tight budget.

It’s multi-purpose, so it doesn’t just pressure cook - it also slow cooks, steams, roasts, bakes and sautés - making it a fantastic all-rounder that saves you needing lots of different pans or devices.

Straightforward digital controls also make using the Crock-Pot easy-peasy. The only trouble you’ll have will be deciding what to cook first.

Buy now from Amazon
Related: The best woks to fulfil your stir-fry dreams 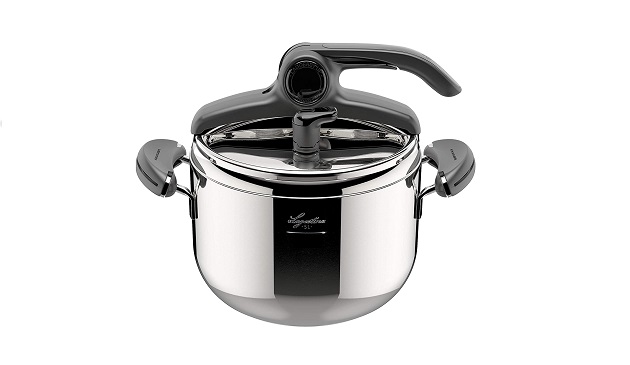 “I've got a Lagostina stovetop pressure cooker. Very easy to use and good safety features.” HardasSnails

If we’ve piqued your interest in a stovetop pressure cooker but you’re looking for something a little more high-end than the Tower 6L Stainless Steel Pressure Cooker, then take a look at this gem from Lagostina.

Happy customers report that their Lagostina pressure cookers are still going strong after more than 30 years, which is a testament to their quality.

What’s more, these Italian pressure cooker experts have come up with their own, patented LagoEasy’Up technology which makes it much easier and safer to handle the pot and the lid when full. 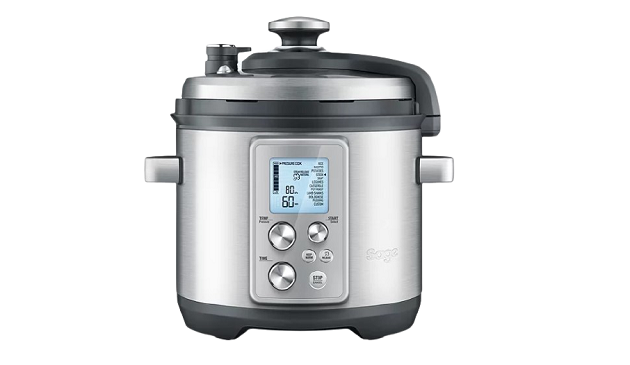 “I've got a Sage and it's incredibly easy to use. It's a slow cooker that also does pressure cooking and steaming (also claims to do risotto in nine minutes). I probably use it at least twice a week. Great for potatoes, pulses, soups, stocks, stews, bolognese etc.” Mogthoughtdarkthoughts

If both sound appealing but you don’t have the budget or the space for two devices, then this pressure and slow cooker combination from Sage is just what you need.

With six preset settings - including pressure cooking, slow cooking, searing and sautéing - and dual sensors that keep an eye on your ingredients, adjusting temperature and pressure to suit, this multi-cooker is a little more expensive than the average pressure cooker, but more than makes up for the price tag thanks to its huge versatility and space-saving qualities. 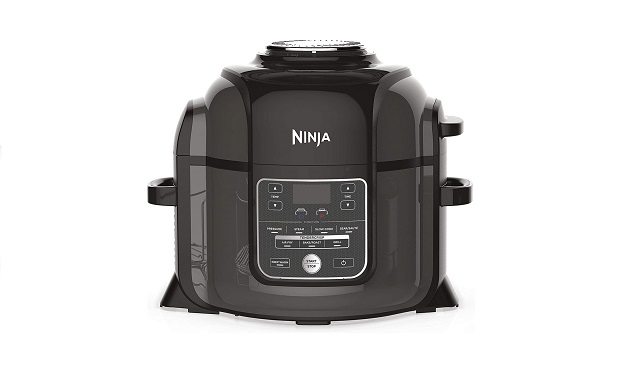 “I love my Ninja Foodi. It’s a pressure cooker/slower cooker but also an air fryer. I think I use it every day. Can cook whole chicken in it and cooks food from frozen. Cannot recommend highly enough.” Glas14368

“I use mine every day. It does everything!” Fairydustandpixies

The acclaimed Ninja Foodi is another nifty multi-purpose cooker that might just change your life.

Like the Sage Fast Slow Pro, it’s a brilliantly versatile gadget that can be used for pressure cooking, slow cooking, air frying, steaming, sautéing, baking, roasting and grilling. In fact, you may never need to use your oven again!

Thousands of happy customers rate this as one of the best things they’ve ever bought for their kitchen and while this  model is on the large size, a mini option is also available. 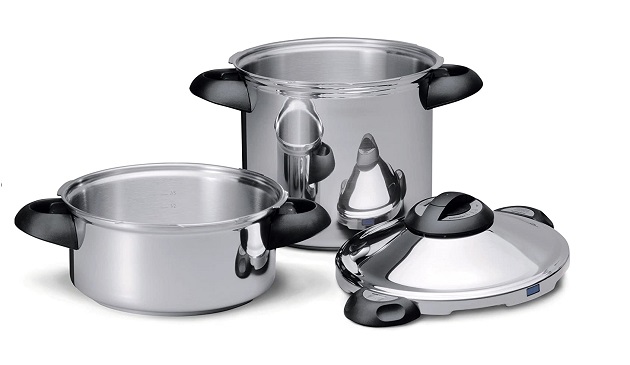 “I have two Kuhn Rikon ones which are great - a seven-litre and the enormous 12- litre.” AngelDog

“I have a stovetop Kuhn Rikon pressure cooker and it’s far and away my favourite kitchen thing!" Very Punny

We love these top-of-the-range stovetop pressure cookers from Swiss brand, Kuhn Rikon, available here in a four- and eight-litre capacity.

The advantages of having a pair of pressure cookers are clear, giving you flexibility to cook varying quantities of food, or even to use both at the same time when preparing food on a larger scale.

Plus, these particular models are known to be quieter and less hissy than some thanks to their revolutionary patented spring-loaded valve.

What is a pressure cooker?

A pressure cooker is a small electric or stovetop cooker which is used to speed up cooking times. It uses high pressure steam to force liquid into the food you’re preparing, meaning it cooks in far less time than by conventional cooking methods. Because of this, your food also retains its nutrients well, making a pressure cooker a healthier option for most families.

Is it better to slow cook or pressure cook?

Slow cooking and pressure cooking serve different purposes. Pressure cooking is great when time is at a premium and you want to prepare food quickly. Slow cooking, which uses lower temperatures, is ideal for dishes, like stews, that are best prepared over a long period of time.

Both are convenient methods of cooking because you simply place your ingredients in the cooker and it prepares the dish for you, with little intervention needed.

There are some brilliant multi-purpose cookers on the market which allow you to pressure cook and slow cook (not at the same time), eliminating the need for two products. We recommend the Sage Fast Slow Pro which is a great cooker for quality and versatility.

How do I choose a good pressure cooker?

The main considerations when buying a pressure cooker are the size and the heat source.

For a couple, or a small family, a three-litre capacity pressure cooker should be sufficient for most dishes. But if you cook on a larger scale then consider a pressure cooker with a capacity of at least six litres which is enough for a larger family or for batch cooking.

Stovetop pressure cookers are usually made from stainless steel. They tend to work at a higher pressure than electric ones, so they may require a little more liquid to be added. Because they have higher pressure, they are faster than electric cookers and, because of their design,  they can make more of a noise and may appear to rattle as they reach their peak.

Another advantage of stovetop cookers is that because of the simplicity of their design and the lack of electrical components and digital controls there is less that may break down over time so they will likely outlast their electric counterparts.

Electric pressure cookers work automatically. Simply set to your desired programme and your cooker will do the rest. Timers mean that they are a great option if you wish the food to be prepared for when you get home.

We think that the best pressure cooker for all-round efficiency and quality is the Instant Pot Duo 7-in-1 Electric Pressure Cooker, a hugely popular gadget with Mumsnetters and found in thousands of kitchens country-wide.

Because we know that there’s nothing like a real recommendation from a real parent, we first headed to the Mumsnet forums to find out which pressure cookers discerning Mumsnet users had bought for themselves.

We then did some research across the wider web, looking at which pressure cookers had won accolades or been featured in ‘best buy’ lists across websites and print media, and what customer reviews said about them. Having collated all that information, we then chose the top pressure cookers  for several interest categories.