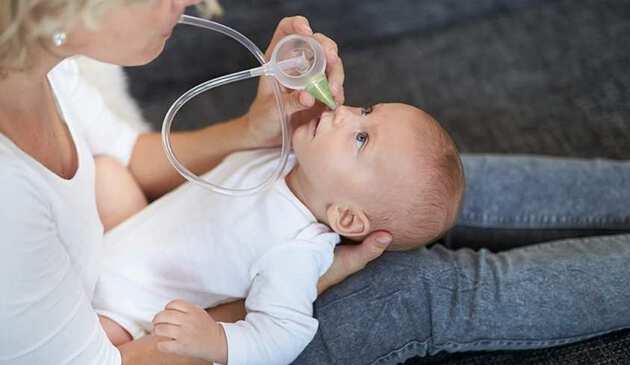 Soothing a baby or toddler with a cold or a bunged-up nose is one of the more testing and frustrating parenting challenges. Your child’s nasal passages are at their narrowest when they’re a baby, but they’re too little to understand nose-blowing, and their age means they’re always coming into contact with new viruses and allergens, making them more susceptible to an attack of the bogies.

Older babies learn to breathe through their mouths when their nose is blocked, but for a baby younger than three months this is a tricky thing to master, particularly when they’re feeding so regularly.

As a parent, it’s a frustrating problem and you just want to be able to reach inside their little nose and suck all that horrible snot out. Well, handily, there are tools out there to help you do just that.

Nasal aspirators help you clear your little one’s nasal passages from mucus and relieve congestion so that they can breathe, eat and sleep more easily. But there’s an enormous amount of nasal aspirators to choose from and it can be tricky to know which one will be best for your child.

To help you make your decision, we’ve researched the top nasal aspirators on the market and come up with our pick of the best.

Here are the best nasal aspirators for use on children. 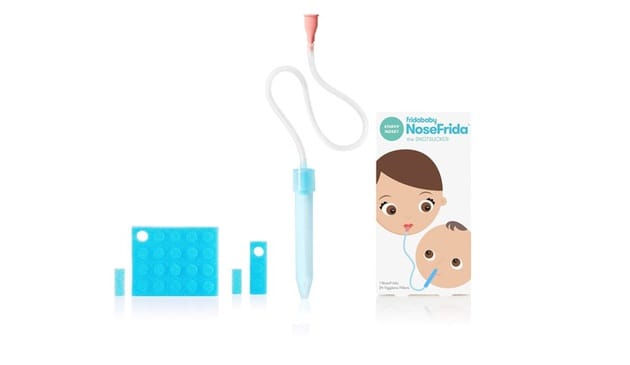 Suitable for use even on newborns, the Nosefrida Baby Nasal Aspirator (lovingly referred to as 'the snotsucker') is a BPA-free nasal aspirator that’s designed to remove mucus from your baby's airways without damaging their delicate mucus membranes.

Simply pop the tube into your baby’s nostril, suck the mouthpiece and watch the magic happen! Parents report that it works best when used in conjunction with a saline nasal spray to help loosen the mucus first, so you might want to consider buying one of these too. 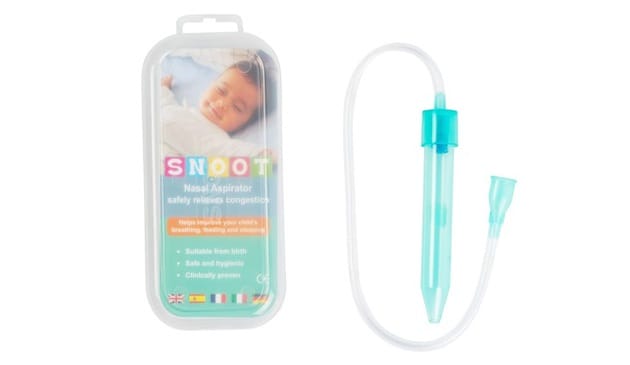 For the best budget nasal aspirator, look no further than this simple device from Snoot, which offers effective snot removal at a great price.

Pop the tube next to your little one’s nostril, then suck the mouthpiece and watch that goo go. This basic piece of kit may be at the lower end of the price scale, but it certainly doesn’t compromise on quality. We like the handy storage box which it comes with to keep all the bits together between uses.

Related: The 12 best baby thermometers to buy in 2021, all recommended by parents on Mumsnet. 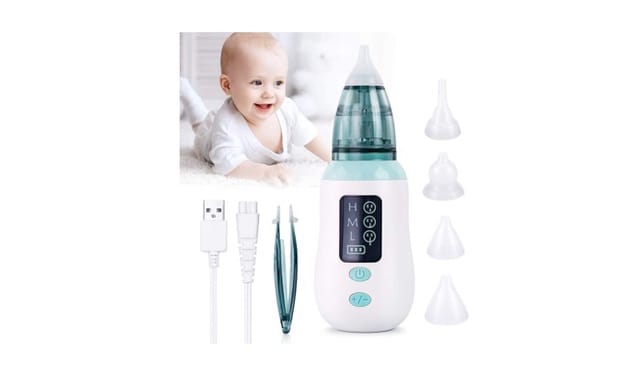 If you don’t think you can handle powering a suction device yourself, then an alternative method of clearing baby’s nasal passages is to use an electric nasal aspirator.

This option from Skyfie is a convenient and powerful piece of kit which can do the hard work for you and comes recommended by hundreds of happy parents.

It has three varying suction levels and different silicone tips to help you find the right solution for your child. After use, simply open the mucus collection cup and rinse with hot soapy water. 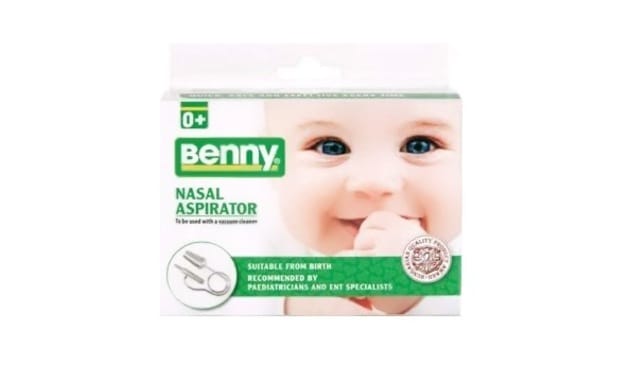 If you like the idea of a nasal aspirator like the Nosefrida but are concerned that you don’t have the suction power to make it work, then how about harnessing the power of that other household device you use for sucking up unwanted nasties?

We refer, of course, to your vacuum cleaner. This clever nasal aspirator attaches to your vacuum and uses its suction strength to bring out the bogies and clear your little one’s nasal passages in an instant. It does sound like a terrifying concept, we grant you, but don’t worry – it self-regulates the amount of power it takes from your hoover, and many happy customers attest to its success.

Related: 9 best booster seats for eating, keep your child secure during mealtimes with these great options. 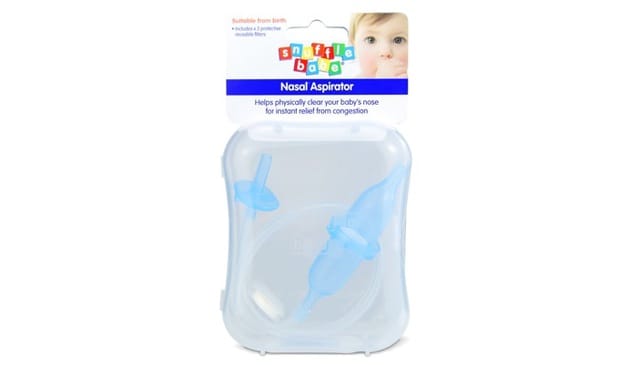 The only nasal aspirator available on prescription from your doctor, the award-winning Snufflebabe Nasal Aspirator is great for use on a newborn.

Unlike other nasal aspirators, the design of this device means that you don’t need to place it actually inside your baby’s nostril, making it that little bit less invasive and an all-round easier experience for everyone.

It works in the same way as the Nosefrida in that you power it with your own suction, and there’s also a Snufflebabe Nasal Saline Solution you can buy separately to help with softening the mucus before use. 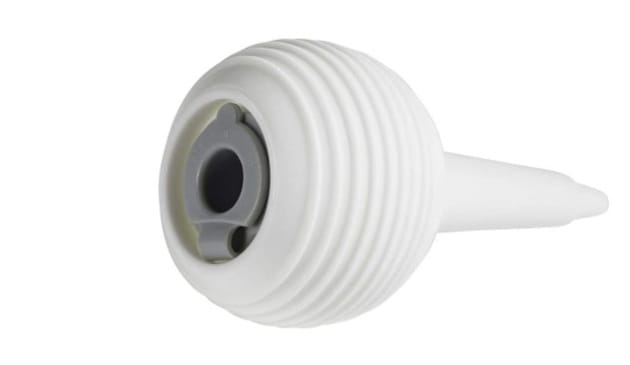 Traditional bulb suction aspiration devices have been around for years and, while they might look a bit daunting, they can be an effective method of snot removal.

Simply place the tip inside your little one’s nostril, press the pump and a vacuum is created. Release the pump slowly and all those nasty bogies will exit the nostril via the spout.

We’ve taken a look at all the bulb suction devices on the market and, in our opinion, this is the best.

Related: Best nappy rash cream for babies - find the right one for your baby. 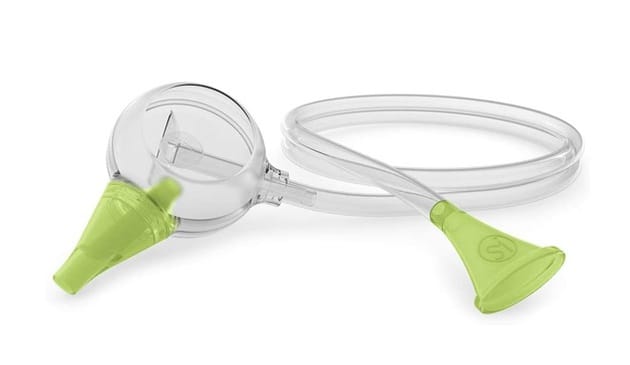 Any piece of parenting kit needs to make life easier not harder, so if you want a no-nonsense nasal aspirator that won’t be a faff to clean, then we think this product from Nosiboo is just the ticket.

These clever people created their own special suction tip which is the only part of the device that needs cleaning after a nose cleaning session – simply take it off and pop under running water.

The aspirator works with Nosiboo’s exclusive patented concept which prevents the nasal mucus from getting out of the suctioning head and, what’s more, it doesn't require any filters either. 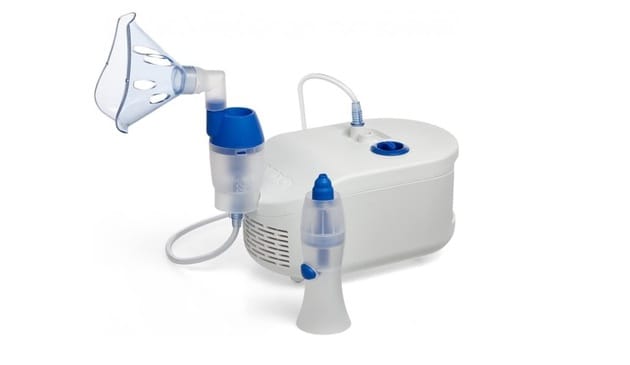 If your baby or toddler suffers from a chronic or more serious condition which causes congestion and build-up of mucus, then you may wish to invest in a more heavy-duty product to help with their breathing on a regular basis.

This nebuliser from Omron has a nasal shower which helps your child to breathe freely all year round by providing nasal irrigation and nebulisation treatment for most respiratory conditions.

Simply pop the mask over their face and let them inhale the vapour which, in turn, will rinse away allergens and reduce the dryness and irritation that leads to inflammation and congestion.

The nebuliser works well with a simple saline solution, or you can also use it to give your child their respiratory medication if required.

How do nasal aspirators work?

Most nasal aspirators work by using suction to remove mucus from your child’s nasal passages. They are particularly useful when your child is still too young to blow their nose, which is a skill they usually acquire at around three or four years old.

There are several different types of aspirator on the market. Each requires a tip to be placed in or around the entrance to your child’s nostril. The suction then draws the mucus out.

Some nasal aspirators use the suction from your own mouth, some use a hand pump, some are electric and some attach to your vacuum cleaner. There are merits and disadvantages to each type of nasal aspirator.

Nasal aspirators are considered a safe and effective method of easing congestion in a baby’s nose, when used in accordance with the manufacturer’s guidelines. Most manufacturers recommend that their nasal aspirators should only be used up to three times a day, as excessive use may lead to further nasal irritation.

A nasal aspirator should be cleaned after each use to prevent a build-up of bacteria which could lead to infection.

Can a nasal aspirator hurt a baby?

When used correctly in accordance with the manufacturer’s instructions, a nasal aspirator should not be able to hurt a baby. Certain types of nasal aspirator, such as a bulb suction device, have been known to harm baby’s nostrils when not used carefully.

How often should you suction a baby’s nose?

Most manufacturers recommend that their nasal aspirators should only be used up to three times a day, as excessive use lead to further nasal irritation.

Which nasal aspirator is the best?

We recommend the Nosefrida Baby Nasal Aspirator as the best nasal aspirator on the market. It comes recommended by thousands of parents who rate it as the most effective nasal aspirator out there. It’s also fantastic value for money at less than £10.

Because we know that there’s nothing like a real recommendation from a real parent, we first headed to the Mumsnet forums to find out which nasal aspirators discerning Mumsnet users had bought for their children.

We then did some research across the wider web, looking at which nasal aspirators had won accolades or been featured in ‘best buy’ lists across websites and print media, and what customers reviews said about them. Having collated all that information, we picked the nasal aspirators we thought would make the best buys in several interest categories.