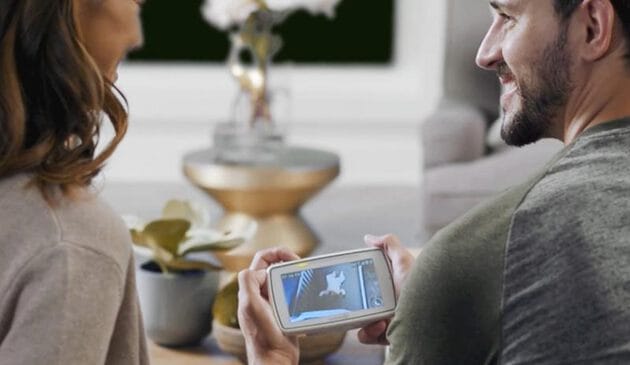 I really rate video monitors. I loved our Summer Infant one - camera zooms in and pans around, and it has good picture quality and range

How easy is the Summer Infant Baby Pixel to set up?

It took our parent testers, Rachel and Bobby, around five minutes to set this monitor up using the supplied instructions. These are packed with clear, easy-to-follow diagrams, guidance on adding extra cameras and troubleshooting information. The handheld parent unit and the camera should already be paired before set-up, which Summer Infant say is for privacy reasons.

There’s also an online video on the Baby Pixel product page on Summer Infant's website if you get stuck, and you can also download the instruction manual there if you lose your paper copy.

Rachel and Bobby noted two frustrations during set-up. One was that they needed to charge the monitor for a whopping seven hours via the mains before first use, and the second was that the stand on the parent unit was quite stiff to open, so much so that they feared it was going to snap (thankfully, it didn’t).

If you encounter any problems, Summer Infant offer a one-year warranty and you can also contact them via email with any customer service queries you may have.

How good is the audio on the Summer Infant Baby Pixel Monitor?

Overall, the Baby Pixel's audio quality is of a high standard while also being interference-free. The volume is easy to alter with a dedicated volume button, and Rachel and Bobby experienced no distortion whatsoever when trying out each of the monitor's seven sound levels. That said, they did find the parent unit's constant background hum quite irritating.

The Summer Infant also boasts a two-way talkback feature, which worked really well and helped our testers settle their eight-month-old baby from the comfort of their own bed on more than one occasion.

While the monitor's sound-activated LED lights seem like a useful feature meant to offer extra reassurance (the LED light bar on the top of the handheld parent unit will light up as it picks up sound, even in power-saving mode), our testers felt that it wasn't always sensitive to quiet sounds or particular nuances and it didn't correlate well with the actual noise levels coming from the nursery.

How about the signal?

Rachel and Bobby found the signal strength generally strong throughout the house and out into the garden, however they noted that it tended to drop behind certain objects in specific rooms every so often.

As such, the layout of your house and furniture may affect how strong you find the audio and video signal to be, however the monitor does have an out-of-range indicator which will let you know if and when signal is lost.

How long does the battery last?

The Summer Infant Baby Pixel falls short when it comes to battery life, which runs down after only five hours.

You can, however, save battery life (but still listen out for coos or cries) by using the power save or VOX functions. The former automatically switches the screen off after 30 seconds if the parent unit isn't plugged into the mains, and the latter sends the monitor into sleep mode while keeping the microphone active, which means that the screen will be turned on as soon as the monitor catches a sound. You can switch the VOX feature on or off at any time.

If your baby sleeps for decent chunks of time, you may also need to keep the parent unit plugged in overnight.

A low-battery alert will let you know when you need to recharge the handheld parent unit – you'll hear a beep and the first LED light on the device will flash red. The baby unit will need to be plugged in at all times.

The Summer Infant Baby Pixel monitor looked super smart in Rachel and Bobby's nursery and, while their eight-month-old did initially find the moving camera quite mesmerising, it didn't disturb their baby's sleep in any way. 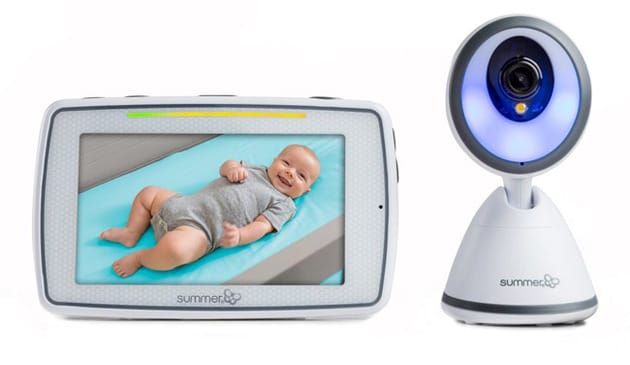 The Summer Infant Baby Pixel has an intuitive menu and a combination of touchscreen and button functionality. This combination can prove a little clunky and it took our testers a few minutes to figure out how everything worked, but, overall, the monitor is relatively easy to use, even for babysitters who may be unfamiliar with the more technical pieces of baby kit.

With a VOX alert that activates the screen only when the monitor detects sound, this monitor makes it easy for tired parents to get some sleep without the disrupting glare of a large screen to contend with.

When it came to video, our testers found the picture quality consistently clear throughout the house and garden. Coupled with the handy zoom, the video element made it easy for Rachel and Bobby to see what their baby was up to both during the day and at night.

The 360 Tilt™ camera works as intended, tilting with full 360-degree flexibility so that you can see exactly what’s going on in any nursery, both small or large.

Using the camera is where it gets really fun, too. Rachel and Bobby altered the camera position remotely to see their baby from all angles by pressing and holding the camera steering button and tilting the handheld backwards and forwards and side to side.

While they initially found this a little counter-intuitive (they needed to tilt it right to go left and vice versa), they generally liked how responsive this function was once they got the hang of it.

You can also use the touchscreen feature on the parent unit to control the camera. This means that you don’t need to worry about getting the camera set up exactly as needed in the nursery as you can do this directly from the sofa without disturbing your child.

If you want to watch what’s going on in more than one room, you can also sync up the parent unit with up to four extra cameras, which is particularly useful if you have multiple children sleeping in different bedrooms. These extra cameras operate on an eight-second rotation.

The only downside to the parent unit's large video screen is that this makes it pretty bulky to carry around the house or to pack if you plan to take it on holiday. If this is important to you, consider a similarly-priced travel video monitor, such as the Summer Infant Liv Cam (one of the other baby monitors we tested), instead.

Our testers found the integrated thermometer useful as it was as accurate as their dedicated nursery thermometer, and they also liked the changing nightlight colour options – red helps to get your baby to nod off and blue soothes them while they sleep.

Parents of mini Houdinis may also like the novel Sleepzone™ virtual boundary alert which lets you set a virtual boundary in the cot that will alert you when your baby or toddler wriggles into a corner or clambers out.

Our testers found the Moonlite™ function – a night vision boost giving you a colour view of your baby in the dark – more gimmicky than useful as both their baby and toddler reacted to it when it came on.

The monitor’s night vision mode worked well enough for Rachel and Bobby to clearly see their children's facial expressions in the dark without the boost so, depending on how easily your child wakes up, the boost may only serve as a distraction.

I have a camera monitor (the Summer Infant one) and wish I'd got that in the first place. It has a couple of annoying features but, mostly, it is very good.

In a word: yes. It's a solid device that has rounded parts to prevent injury and it stood up well to the rigours of everyday family life during testing, even surviving being dropped down the stairs without damage.

It comes with six cable clips to keep loose cords out of reach of your child which is a reassuring gesture, and it also has a wall-mounting kit so that you can attach the camera to the nursery wall with a screw if you need to. This wasn’t tried out as part of testing, however.

Summer Infant also advise parents to never place the camera or cords within three feet of any newborn bed or crib.

With only a couple of places behind the parent unit's stand that could be prone to dirt build-up, the Summer Infant Baby Pixel is otherwise really easy to keep clean.

It's made mainly from plastic, which means that (good news!) there's nothing a quick wipe with a soft cloth won’t fix.

With solid audio and signal range, outstanding picture quality, a large touchscreen and virtual-reality-esque zoom, pan and tilt controls, overall we think the Summer Infant Baby Pixel offers real bang for your buck – but only if you're after a monitor with all the bells and whistles.

If you're looking for something simpler and cheaper, you may find a budget-friendly option, like the VTech DM1111 audio-only baby monitor, much more appealing.

This baby monitor gets the basics of good audio quality and signal range right, and is jam-packed with extra features including pretty nightlights, VOX technology, an accurate thermometer.

What really sets it apart from other monitors, though, is its video functionality, which is why we awarded it ‘Best Video Baby Monitor 2020’.

All Mumsnet product reviews are written by real parents after weeks of research and testing – this includes recommendations from the Mumsnet Talk boards. We work hard to provide honest and independent advice you can trust. Sometimes, we earn revenue through affiliate (click-to-buy) links in our articles. However, we never allow this to influence our coverage. Read our how we test page to find out more.

For more information about what to look for when buying a baby monitor, check out our buyer's guide.