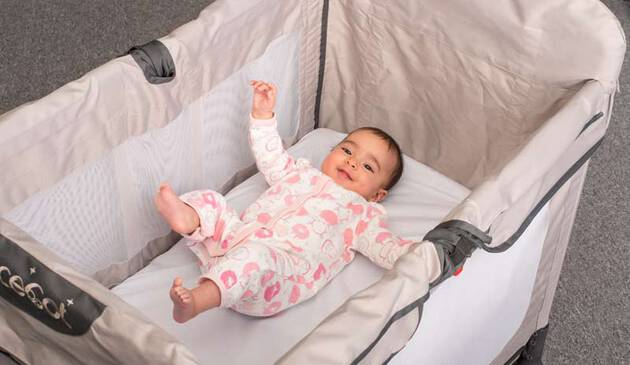 The SpaceCot is the easiest travel cot I've ever used.

How safe is the SpaceCot?

SpaceCot claims that the Alfa has been made using the ultimate in space technology, an idea which began in the engineering department at Oxford University.

With support from the European space agency and several prototypes later, the first SpaceCot, which passed all of the UK and EU safety tests, was born.

Its aluminium frame is robust and has a folding mechanism based on those of satellite solar panels and the fabric is made from polyster with mesh each side so your child can see you and you can see them.

There are also child safety locks on either side of the SpaceCot which means that it is impossible for anyone other than an adult to fold or collapse it.

The material covers the frame well and there is nowhere for little fingers to become caught or trapped. It also comes with a bassinet that clips onto the frame – those clips are covered by fabric so a child would be unable to get to them.

In terms of stability, there are three bars across the bottom of the SpaceCot which make it very sturdy and pretty much impossible to knock over. Our tester, Ruth's, child jumped up and down inside the cot as well as throwing himself into the sides and it didn’t move from the spot where it had been assembled.

But the greatest feature is definitely the mattress which is already fitted into the cot when assembled, and remains in the bottom when it’s packed away. It fits the travel cot snugly and isn’t affected or in the way when the cot is folded or reassembled. The only time the mattress would be removed is if it needs to be transferred from the bassinet to the main travel cot.

How easy is the SpaceCot to assemble?

One of the SpaceCot’s main selling points is that it can be assembled in one second and folded down in three.

The travel cot comes with an instruction poster which can also be downloaded from the alittlebitbrilliant.com website.

The instructions are well illustrated with text underneath each image. But, because assembly and folding is so quick and simple, putting the cot up and taking it down can be done without the need to follow any instructions at all.

Ruth tried watching the video which also appeared on the webpage, but it kept flashing up that there was no content available.

Even though a lot of thought has gone into the design, it actually appears to be the least over-engineered product she tried. The design is sleek and simple and it is incredibly easy to use.

There isn’t much choice when it comes to colour as it only comes in light grey, dark (Midnight) grey and silver, which is the colour we tested, but a lot of travel cots tend to be in these muted tones as they will fit in pretty much anywhere in the home.

The cot provided a lovely and calming environment for sleep. Of all the travel cots we tested, the Zero-G mattress stood out as being the comfiest and Ruth's 18-month-old child settled and slept in the cot very well. In fact, she said that if she could have jumped into the cot herself then she would have done. 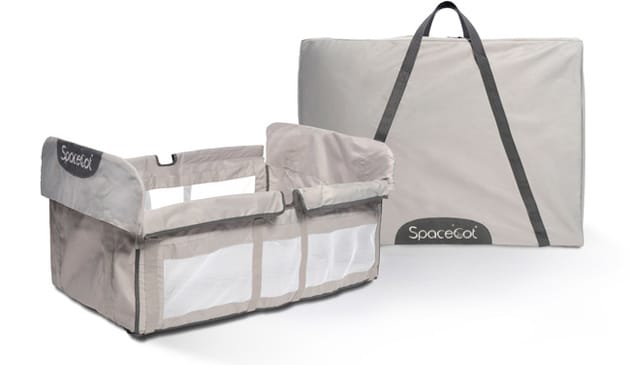 The beauty of the SpaceCot is that you can move it anywhere in the house with ease. Because it collapses so quickly and folds in half, which means that it is really narrow at only 14cm wide, getting it through doorways is a doddle.

Ruth did find it a bit cumbersome to carry through the house as, although it is narrow when folded, you still have to deal with the height. She said it was a bit like carrying an exceptionally large briefcase and found getting it up and down the stairs tricky as it tended to scrape the floor.

While the cot is lightweight at just 6.7kg, it felt heavier than this when packed into its carry case, which means that it may not be ideal to take with you on train journeys.

Day-to-day folding requires much less bending down than other travel cots though as it has a handy kickstand, like you would see on a buggy, which brings the bottom of the travel cot up towards you so that you can fold it in half without having to put any strain on your back.

When assembled, It's a bit on the narrow side to be used as a playpen, unlike the Red Kite Sleeptight, but it would be a safe place to leave a child if you needed to answer the door or cook something without them getting under your feet.

Our tester used the SpaceCot Alfa at home and it slotted into the corner of most rooms really easily. Her son also seemed quite happy to nestle into the mattress and go to sleep when he was feeling tired.

The SpaceCot slips easily into its carry case once folded and can be slotted under a bed for storage or laid flat across the boot of the car when used for holidays or overnight stays. It would, however, be a bit too big length-wise to take as hold luggage on the plane.

The fact that the cot only comes in light colours means it's likely to attract dirt easily. Any grubby finger marks on the main grey or silver fabric can be spot cleaned with a cloth, but stubborn stains are harder to remove and do require some elbow grease.

Ruth removed mud and sand from the cot with the combination of a handheld vacuum cleaner and a damp cloth and the material fared pretty well.

The colour she tested was so light that we would recommend dabbing, rather than rubbing, any soiled material with a damp cloth to get the worst of the dirt off first.

The covers, including the sides, do come off though, so she could pop them in the wash, leave them in the sun to dry and then clean all parts of the frame, which she really appreciated.

All the bedding is lovely and smooth, but there is no separate sheet for the mattress which could easily become stained through posseting or dribbling.

The SpaceCot at the higher end of the scale when it comes to price, but that’s fairly understandable considering the work that has gone into its unusual design.

If you're after a travel cot that is effortless to use, while offering good longevity, then it's definitely worth the extra cash.

A definite talking point with it's love-or-hate aesthetic and ingenuity, particularly when it comes to space-age technology, the SpaceCot is brilliantly constructed and is, quite simply, the best easy-folding travel cot around.

It takes a matter of seconds to put up and take down so will not only save you time, but also any extra strain on your back.