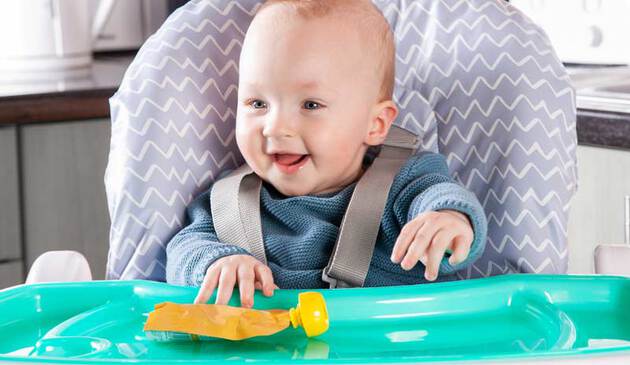 How easy is the Red Kite Feed Me Deli to purchase and assemble?

The Feed Me Deli is available from retailers such as Amazon and Argos at a mid-range price point. Everything you’ll need is included in the box, which is large and fairly heavy – 49cm x 30cm x 69cm, and about 8kg in weight. You should fit it in a car boot without any problems though.

Once opened, you’ll need to assemble the highchair completely – put the steel frame together (including the footrest), attach the seat to the frame and the tray onto the seat. The instructions come with photographs and text, but are a little confusing. Still, our tester, Katrĩna, had it up and running within 10 minutes with no tools required.

The instructions also come with warnings, information about the relevant safety standards met and a customer helpline number for sourcing spare parts. The instructions are available for download on Red Kite’s website if you need them later.

The Feed Me Deli also comes with a 12 month warranty.

It’s a utilitarian piece of kit, the Feed Me Deli, which comes in one patterned colourway (Peppermint Trail) that is busy enough to keep your baby interested, but won’t necessarily complement your kitchen. Those patterns are fun and colourful, and have the added advantage of hiding food stains fairly well.

Altogether, though, it’s a functional piece of equipment rather than a design statement in its own right.

Related: The best bibs for babies and toddlers 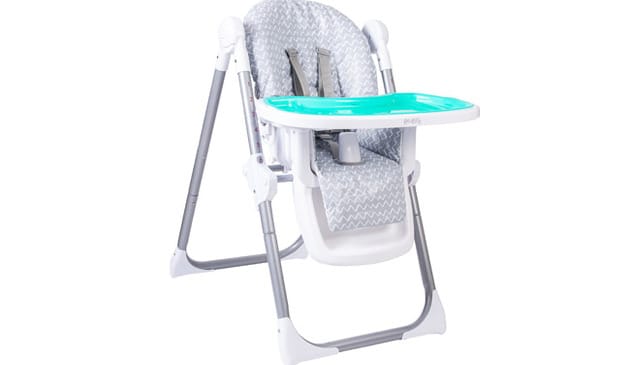 Relatively inexpensive as it is, the Feed Me Deli is nevertheless equipped with an impressive number of useful features.

It’s convenient to be able to alter the height of the seat between six positions so you can have your baby at eye-level and reach them easily while feeding them. It also means that, without the tray attached, the baby can sit right up at the table with the rest of the family, which they may particularly enjoy as they get older.

The tray adjustment adds to the longevity of the seat too, although Katrĩna felt it could have done with one more position added – even on its closest setting, the tray still sat quite far away from her nine-month-old baby.

Additionally, the three-step recline helps to get the baby in and out without having to remove the tray, and also allows them to sit at an angle that suits them.

Overall, the adjustment mechanisms are easy to manipulate with two hands and the generously padded chair feels nice and comfortable. The moulded plastic frame also keeps little legs in place without the possibility of slipping, and the tray comes with an extra wipe-clean tray insert, which should cut down on the post-mealtime clean-up.

Good news for those with smaller kitchens – the Feed Me Deli folds up easily and is freestanding when folded, with a folded footprint of 51cm x 28cm. You should be able to stand it in a corner or behind a door when not in use, freeing up space for the whole family.

How safe is it?

Lightweight as it is, the Feed Me Deli nevertheless feels sturdy and well-anchored thanks to its wide base (its open footprint is 51cm x 77cm). It can be dragged without effort around the kitchen and the feet don’t leave any marks on the kitchen floor.

There are no sharp corners and even though the rounded plastic tray stands at about toddler head-height from the ground, it shouldn’t do more damage than a bump.

The reclining seat mechanism feels secure when in use, as does the five-point harness which can also be adjusted without too much difficulty.

The Feed Me Deli is surprisingly stable when folded and freestanding – only a hard push from an adult made our tester’s model topple over. The padded chair back comes over even a toddler’s head, so a just-weaned baby will feel cradled and safe when in position.

During our drop test, the Feed Me Deli survived being dropped repeatedly without any scratches. The tray, made from a slightly softer plastic, did scratch a little when dropped over and over, but it didn’t crack. The footrest did not bend or buckle when an approximate toddler weight was applied and it was impossible to rock the chair over from the side.

Red Kite confirms that this highchair conforms to the safety directive BS EN 14988:2017, and while it might not be made of the same stern stuff as some of its competitors – say, the Chicco Polly Magic Relax – it performed surprisingly well under stress, and should stay in one piece over time.

Related: When and how to start weaning your baby 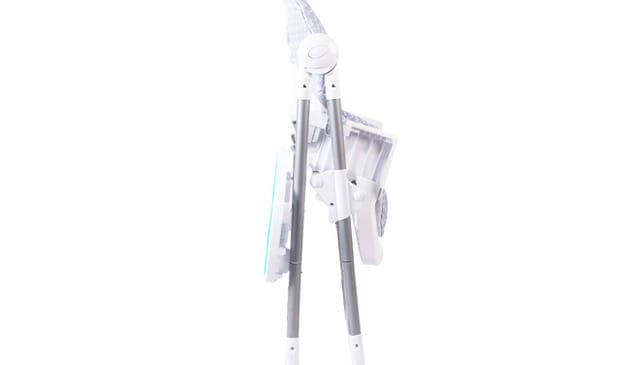 Is the Feed Me Deli easy to clean?

Here’s where the Feed Me Deli falls down a little, as the seams of those luxuriously padded cushions are a magnet for food crumbs. The cushion can be removed and wiped down with hot soapy water, but can’t be machine washed. Taking the cushion off is too much effort to be an everyday occurrence.

Katrĩna kept it clean with a hot sponge, but it took more effort than cleaning other models we tested, like the Oribel Cocoon and the Cybex Lemo.

The metal frame and plastic tray (not dishwasher-friendly) can be wiped down fairly easily. Hardened porridge came off without too much effort, but Bolognese sauce left a faint stain on the cushion. Katrĩna noted that the busy pattern helped to disguise this, however.

The Red Kite Feed Me Deli isn’t the ultimate in intelligent design or understated style, but it packs in so many extra features that it stands above its competitors at similar budget price points.

Adjust the height or the seat angle, use the tray insert or take it out, remove the tray entirely and hang it on the back of the seat, or fold away the chair to stand securely in a corner – it’s a genuinely useful piece of kit that should work to make your life a little easier.

For more information about what to look for when buying a highchair, check out our buyer's guide.