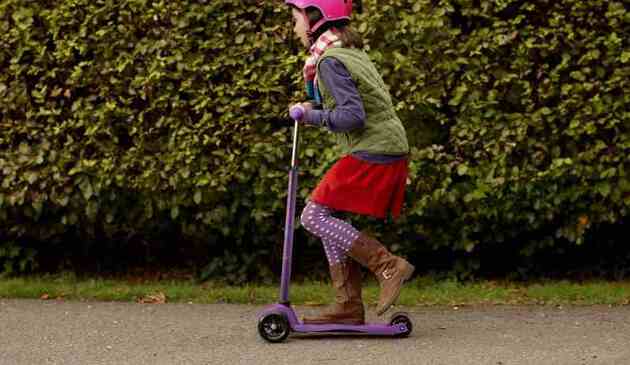 DS is seven and has the foldable one in petrol blue. He and I love it. He uses it to go to school a few times a week.

What’s the Maxi Micro Deluxe like to purchase and assemble?

It’s generally understood that buying into the Micro Scooters brand will strain your wallet, but reward your investment, and the Micro Scooters website certainly goes above and beyond to be reassuring and helpful with your purchase.

The Maxi Micro Deluxe is widely available, both from Micro Scooters themselves and a wide range of other retailers, including John Lewis & Partners, Smyths Toys and Amazon. There are no extras to purchase separately, although you do have the choice of upgrading to LED wheels (which our parent tester, Rachel, did not think was worth the extra cost) or a folding version, the Maxi Micro Deluxe Foldable (which she thought would be).

As part of Micro Scooters’ commitment to durability, every part of the Maxi Micro Deluxe that might feasibly wear out can be bought as a spare. There’s also a service centre and the option to have a Micro Engineer call and talk you through it. The scooter itself comes with a two-year warranty on non-consumable parts – so excluding things that would wear out with use, like wheels, bearings and brakes.

The Maxi Micro Deluxe comes in a fairly small box, with a cut-out handle to carry it. It’s not heavy and, at 60cm (l) x 17cm (w) x 26cm (h), would be easy to take home on public transport or even fit in the basket of a large pushchair.

The box is printed with the appropriate age range in several places, but you’ll have to hunt for the small print on the bottom for information about safety regulations, maximum weight limit and height. The website is much clearer and we recommend this as an easy source of essential information.

Once opened, the scooter is in two parts: baseboard and T-bar. Assembly is just a matter of pushing the T-bar onto the baseboard, making sure it clicks to lock, then adjusting the height of the T-bar if needed. The whole process took our tester about a minute, then the Maxi Micro scooter was ready to go.

The instruction manual included in the box features some small photographs and text to help with assembly, along with safety warnings, maintenance instructions and warranty information. It’s fairly minimal, but well-written and easy to follow. Given how straightforward the assembly is, you wouldn’t need anything more detailed.

The Micro Scooters ecosystem is large and well-planned, so it’s odd that there’s no digital copy of the instructions online – but the Q&As on the website for each model are thorough, and Micro’s YouTube channel has a host of videos comparing, assembling and repairing the Maxi Micro Deluxe. 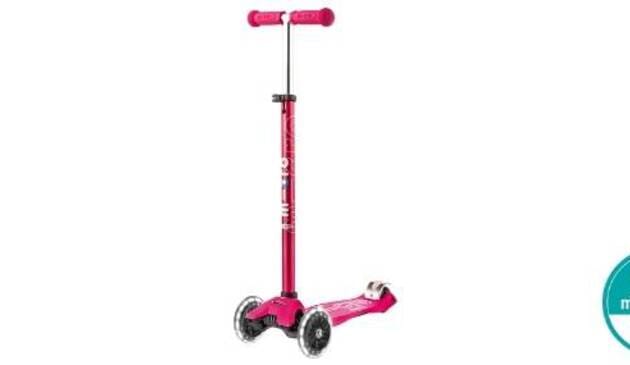 How safe is the Maxi Micro Deluxe?

As the CE symbol on the box suggests (and the website confirms), this scooter complies with European safety law EN:71 and international standard ASTM F963.

The Maxi Micro Deluxe is built for longevity, with an anodised aluminium T-bar to reduce scratches, a silicone-covered fibreglass baseboard for lightweight riding, and hard-wearing polyurethane wheels. All the materials and finishings feel high-end, and the stem and wheels in particular are very solidly made.

Like the younger Mini Micro Deluxe, the handles are 26cm wide in total, with 12cm allotted per hand. It’s not as wide as the age-equivalent Globber Elite Deluxe, but still feels stable at speed. There aren’t any predetermined T-bar positions, except at the very top, which does mean your child can choose any height they prefer. But this involves a little more fiddling with the T-bar clamp.

The ends of the Maxi Micro Deluxe handles are protected by very soft, ridged rubber (rather like the end of a joystick). This is comfortable to hold and also mitigates the impact of hitting the ground, as they did repeatedly in our tip test.

When pushed over to the front, the plastic moulding between the front wheels scrapes the ground, and after a while our tester could see some ragged edging where it had rubbed on asphalt. Other than that, the Maxi Micro Deluxe emerged from the testing period looking almost as good as new, which bodes well for its longevity over time.

The baseboard is covered in non-slip silicone lettering and is 13.5cm at its widest. This balances the height of the T-bar well and can fit two small feet side-by-side if necessary.

Along with the wide wheel base (23.5cm) and ample ground clearance (3.5cm), the Maxi Micro Deluxe performs brilliantly on bumpy and damaged asphalt. There’s also not much danger of tipping forwards, which is safer for the younger end of the recommended age range.

Like the 3StyleScooters RGS-2, the Maxi Micro Deluxe has a double rear wheel, which reduces the likelihood of friction damage from the double-width metal footbrake.

The brake is positioned high and has a ridged plastic piece on top so it’s easier to find with your feet. Braking is quick and efficient even at speed. During the brake test, the scooter took a short 42cm to come to a complete stop.

There aren’t any reflective strips on this model, which is a surprise given that the younger and older models both have them. As ever, you’d want to keep little fingers away from the T-bar clamp, but apart from this there aren’t any crevices or sharp edges to watch out for. 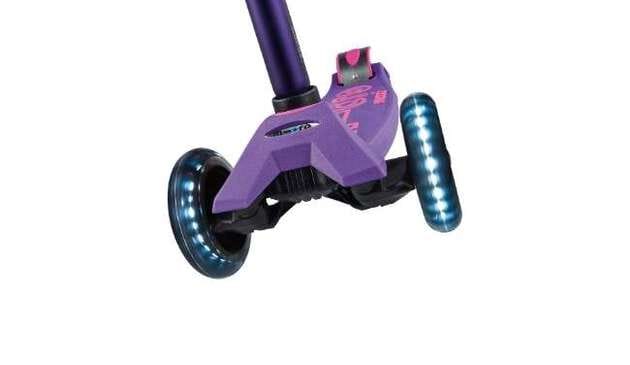 It’s a tall order for a designer to make a scooter equally attractive and useful to a five-year-old and a 12-year-old (plus all the ages in between), but we reckon the Maxi Micro Deluxe does an excellent job.

It’s been engineered to high specifications in all respects. It's comfortable and speedy on different terrain, whisper-quiet in motion, and commendably solid when jumped on, thrown into the car or left to clatter on the ground (as children tend to do in a hurry).

The lean-to-steer mechanism can’t be locked (it’s assumed that this won’t be your first scooter), but it's easy to manoeuvre and offers a smooth ride. In use, the Maxi Micro Deluxe is impressively speedy, while never feeling out of control, unbalanced or unsafe.

How heavy is the Maxi Micro Deluxe to carry and can it be folded?

Even with the tall T-bar, wide baseboard and big wheels, it’s still only 2.5kg, so our tester’s seven-year-old could kick off and go without wobbling, and lift it over kerbs himself with both hands.

It does feel a little large and cumbersome to carry as a parent, and doesn’t fold, though the quick-release T-bar is useful when packing it away. The standing footprint is 56cm x 24cm, which doesn’t take up too much room in the shed or car boot.

What about the handlebars?

The hand grips are ridged rubber, and soft and comfortable to hold. Unfortunately, after leaving it outside in an afternoon of strong sun, the hand grips began to degrade a little, becoming a bit ‘sticky’ in the hand. This is worth bearing in mind, especially as there were no warnings to this effect in the manual, though we should say that it didn’t alter the usability or safety of the affected handle.

Our tester’s small seven-year-old preferred the T-bar at its highest position, which reached mid-rib level when he stood on the scooter. As a scooter is still safe to use when the T-bar is at the waist, and the maximum weight is an impressive 70kg, it’s safe to assume that you’d be able to use the Maxi Micro Deluxe for many years.

Is the Maxi Micro Deluxe easy to clean?

The white silicone on the Maxi’s baseboard is great for grip, but tends to show dirty footprints immediately. But these can be wiped clean with little effort.

At the end of the week-long testing period, there were scuff marks on the brake, a little ragged edging on the plastic moulding between the front wheels, and the sun-bleached hand grip was marginally lighter than the other one – but all-in-all the Maxi Micro Deluxe bore up very well, and barely looked used at all.

What is the Maxi Micro Deluxe like to look at?

Aesthetics are where Micro Scooters really stands out from the crowd, and the Maxi Micro Deluxe is no different. It oozes quality, with every fitting showing attention to detail. We tested the model with LED wheels, which comes in six colourways: pink, red (our model), navy, purple, blue and aqua.

The Maxi Micro Deluxe without the LED wheels comes in a slightly different selection: red, purple, pink, mint, navy, petrol green and black. It’s a beautiful, modern range of colours that should suit every child’s (and parent’s!) taste.

Is the Maxi Micro Deluxe good value for money?

It’s £124.95 for the standard Maxi Deluxe, £132.95 for the model with LED wheels, and £144.99 for the folding version. Frankly, no one could call that price point anything other than eye-watering, but it’s unusual to find a scooter that could be ridden regularly for seven years, and this one could. Not only that, it’s robust and durable enough – and has enough spare parts available – to be passed down to any number of siblings and friends.

There are also a large number available on secondhand sites – many being sold new from £70 to 80, and used from around £40. Not only would it be easy to get a secondhand model in good shape, but there'd be an eager market for it if you wanted to sell yours on once it had been outgrown.

There’s nothing especially flashy or ostentatious about the Maxi Micro Deluxe, but there doesn’t need to be. It’s the apex of scooter design for primary school kids: every element considered, every material high-end and every mechanism perfectly engineered.

Buy it new and expect to pass it on or look for a bargain secondhand. Either way, you’ll get a scooter that’s nothing but a pleasure to ride.