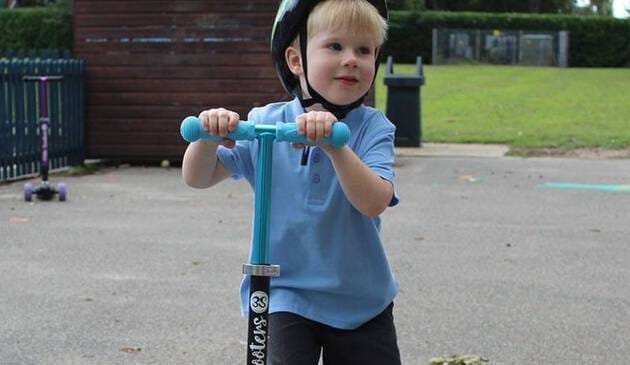 We got one from 3StyleScooters and have been really pleased with it. It has the features of the Deluxe Micro scooters - it folds up and has LED wheels - but was only around £50 and DD got the colour she wanted.

Relatively new as it is, the RGS-2 can be bought from the manufacturer and just a couple of other outlets, although one of them is Amazon where it consistently tops their bestseller lists. No extras are needed for the scooter itself, though 3StyleScooters does sell helmets and safety gear on their website, which, like the scooter itself, are all very reasonably priced.

There’s an extensive spare parts shop easily located on the website too, plus a really useful set of maintenance guides for each model, each with step-by-step photos and text. So if something does break, even an absolute beginner should be able to get the RGS-2 up and running again, which our parent tester, Rachel, found reassuring.

Once it arrives, the box is fairly compact: 61cm (l) x 16cm (w) x 27cm (h). It doesn’t have a carry handle, but you’d be receiving the parcel as a delivery anyway. The box is covered in useful information about maximum weight, appropriate age range and the height of the T-bar, and also includes the CE mark to indicate compliance with EU safety law.

Inside, the RGS-2 is already pre-assembled, and uses the easiest unfold mechanism of all the scooters we tested: brace the handlebars against your hips, pull the easy-grip handle towards you, and the scooter swings open and locks. While we don’t advise doing this with small children within swinging distance, it’s a mechanism with no possibility of pinching fingers – something our tester was very grateful for – and one that means the scooter is ready to go in less than a minute.

While no tools are required, 3StyleScooters does include a set of allen keys in the box for tightening screws over time, which we think is a thoughtful touch.

What about the instructions?

More good news here. The instruction booklets produced by 3StyleScooters were the most helpful we encountered during testing by a long way. Colourful, clear and with friendly text and diagrams, you’ll find everything you need including safety warnings, maintenance advice, and instructions to assemble and adjust.

There’s also a page listing the scooter’s maximum weight, age range and which T-bar height is intended to be used for which age group, which again was unique among the instruction manuals we used. However, if you’re after safety law or warranty information, it’s the website you’ll need as these aren’t in the instructions or on the box.

While there’s no digital copy of the instructions online, part of the maintenance section of the website includes setting up the scooter, so you’ll be covered either way. 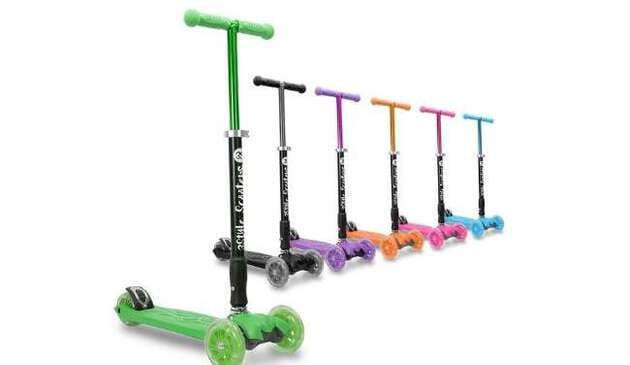 How safe is the 3StyleScooters RGS-2?

As a starting point, the RGS-2 complies with EU safety law EN:71, which regulates materials and mechanisms for scooters that can carry a maximum weight of 50kg. Like Micro's scooters, the RGS-2’s frame is Swiss-designed.

The RGS-2 is comprised of a polypropylene and nylon baseboard, an aluminium T-bar, tough polyurethane wheels and rubber hand grips. Assembled, it feels incredibly sturdy, and nothing broke or was damaged during the week-long testing period, despite heavy use from our tester’s son. The double back wheel in particular makes the ride feel smooth and safe, and prevents friction damage from the footbrake.

According to the instructions, the lowest of the T-bar’s three notched height positions is intended for a child aged five, the middle for one aged six or seven, and the top position for age eight and over. Our tester’s seven-year-old spent most of his time with the T-bar in its lowest position, so the handles reached his waist, and had plenty of growing room.

Like the younger RGS-1 model, and the equivalent Micro scooters, the handlebars are 26cm wide with 12cm allocated to each hand. There’s plenty of room to grip and, with an extra-wide baseboard (14cm at its widest point) and 4cm ground clearance, the scooter feels extremely stable on a variety of hard surfaces.

This was also reflected in our tip tests. The wide wheel base and extra back wheel makes the RGS-2 almost impossible to tip over to the front without flinging it. Better still, the plastic moulding between the front wheels is higher than its Maxi Micro Deluxe or Globber Elite Deluxe competitors, so wasn’t damaged in the falls. When tipped to the side, the rubber hand grips hit the ground first, but didn’t show any scuffing on impact.

The only downside is that the baseboard isn’t covered in any non-slip materials, just some plastic ridges. While this is sufficient in good weather, our tester felt that this might present a difficulty with slippery wet shoes.

This age group is almost certainly not new to braking, but the RGS-2 makes it easy anyway, with a double-width plastic footbrake and two back wheels to share the load.

It’s a little stiffer in practice than the younger RGS-1, but our tester’s slight seven-year-old still had no problem braking on command. During the brake test, the scooter took 140cm to come to a complete stop.

All RGS models come with LED wheels as standard, which delighted our tester’s children and made the scooter more visible (though 3StyleScooters doesn’t recommend scooting at night). As ever, there’s always a chance that the T-bar clamp can trap a finger, but otherwise the RGS-2 is remarkably free from crevices or sharp edges. 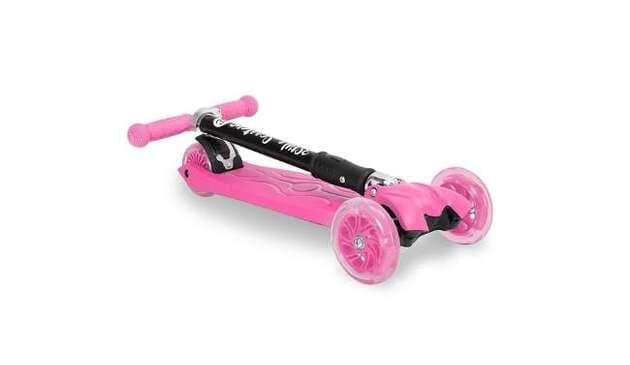 The RGS-2 three-wheel kick scooter is a solid and surprisingly quick little machine in use, with a responsive lean-to-turn mechanism. It’s easy to kick off and go, steer, avoid obstacles and brake quickly. Being a little bigger than the younger RGS-1, it can also handle school and library journeys in comfort.

Our tester couldn’t hear any noise when the scooter was in motion, apart from the wheels on the asphalt, and the plastic baseboard doesn’t noticeably bow or bend when jumped on.

How heavy is the RGS-2 to carry?

At 3.5kg, the RGS-2 is heavier than its direct Micro competitor (the Maxi Micro Deluxe), but lighter and more manoeuvrable than metal-framed alternatives, like the Oxelo Mid 5. Our tester’s seven-year-old was able to easily lift it up and down kerbs himself, though it does feel cumbersome for a parent to carry, even when locked in the folded position.

Speaking of that fold, the easy-grip handle makes it the simplest folding mechanism we tried, which means it won’t take long to collapse and throw into a car boot. Changing the height of the T-bar between the predetermined notches can be done equally quickly. The folded footprint is 60cm x 23cm, so it should easily fit into a shed or garage as well.

Is the 3StyleScooters RGS-2 easy to clean?

After an enthusiastic week of riding, the RGS-2 showed a little dirt and scuffing on the baseboard and wheels, but otherwise looked almost brand-new. The hand grips and anodised stem didn’t show any scratches or stains, and there are almost no crevices for dirt to get trapped – except in the plastic non-slip moulding on the baseboard, but this could be sprayed down quickly and easily.

3StyleScooters’ RGS range comes in an impressive array of bright, modern colours. The RGS-2 has a black lower T-bar, and the upper T-bar, hand grips and baseboard come in a contrasting colour: blue, green, orange, purple and pink (it also comes in all black if you prefer).

We tested the green model, which looked exciting enough to cause a stir when the box was opened. Having light-up LED wheels as standard is an additional thoughtful touch.

The 3StyleScooters logo on the T-bar was a bit too large and splashy for our tester’s taste, but this is a nitpick. Altogether, the RGS range looks very well-engineered and aesthetically-pleasing for children. 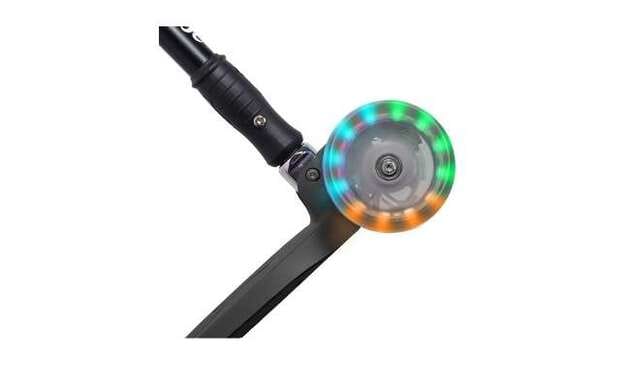 Is the 3StyleScooters RGS-2 good value for money?

This is where 3StyleScooters really shines. They say the motivation for founding the company was the desire to make a kids’ scooter that would last just as long as the high-end models, without breaking the bank.

The youngest model, the RGS-1, is a budget-friendly £39.99, but just missed out on our ‘Best Budget’ award because first scooters tend to be outgrown quickly. The RGS-2 is £10 more at £49.99 but, with the maximum heights and weights so large, the limiting factor is more likely to be how long your child wants to ride a three-wheeler rather than them outgrowing it too soon.

It definitely feels robust enough to be passed down to a sibling, and there’s a decent handful being sold secondhand online for between £10 to £20. As such, there will be an RGS-2 available for almost every income level.

The branding is not quite as slick as the popular Micro scooters, and the baseboard is less robust than the Maxi Micro Deluxe too. But, in every other way, the 3StyleScooters RGS-2 holds its own against every model on the market.

That it manages to be beautifully made, visually striking and seriously durable while half the price of some competitors is astonishing. We reckon it’s only a matter of time before 3StyleScooters has a world-beating empire of its own.

All Mumsnet product reviews are written by real parents after weeks of research and testing – this includes recommendations from the Mumsnet forums.

We work hard to provide honest and independent advice you can trust. Sometimes, we earn revenue through affiliate (click-to-buy) links in our articles. However, we never allow this to influence our coverage.

The scooter was used by one of our parent tester, Rachel's, three children who rode it multiple times a day, every day for at least a week. They also took it on shorter and longer rides, and to a large, clear outdoor space for specific performance tests. Finally, it was scored on six areas: purchase and assembly, safety and stability, day-to-day use, cleanliness, aesthetics and value for money.