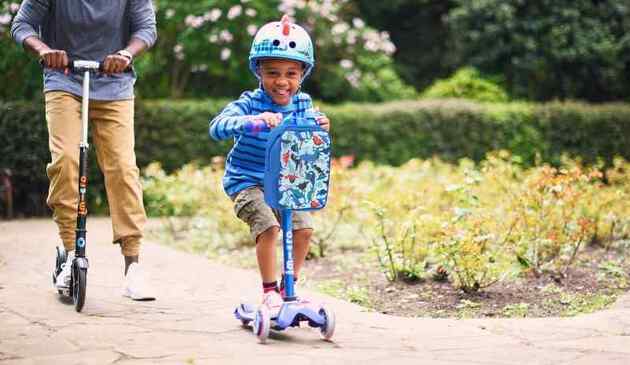 DD loves hers. We got the Deluxe as the handlebars are height-adjustable.

What’s the Mini Micro Deluxe like to purchase and assemble?

The Mini Micro Deluxe is widely available online, both from Micro Scooters directly and from other retailers like Halfords, Jojo Maman Bébé, John Lewis & Partners and Amazon.

Micro Scooters sells a massive range of accessories and safety gear, from helmets, gloves and lights to bags, bottle holders and bells. Some of these come in gift packs with the scooter itself, but these are only worth buying if you’re certain you’ll use everything in them.

Speaking of extras, Micro Scooters’ brand ethos hinges on sustainability, so all parts of the Mini Micro Deluxe Scooter can be replaced to make it last forever (at a price).

The spare parts section of the Micro Scooters website is extensive and easy to navigate. It has a service centre, a range of YouTube videos to help you repair the scooter yourself, and a service to get a call from a Micro Engineer for personalised assistance, should you feel less confident. The extensive customer aftercare is not only reassuring but helps to justify the Mini Micro's hefty price tag.

Once you’ve received your Mini Micro Deluxe, you’ll find the box is small and manageable: 55cm (l) x 14cm (w) x 26cm (h), with a cut-out handle to carry it. It’s not heavy and would be easy to take home in a car or on public transport.

The box includes some information about the appropriate age range, weight and materials, including the CE symbol to indicate compliance with EU safety law. For more in-depth information, you’ll need the instruction manual and the website.

Inside the box, the Deluxe is in two parts – baseboard and T-bar – and assembly is just a matter of fitting the T-bar onto the base. The T-bar is then extended to the preferred height by loosening a clamp. No tools are required and the process took our parent tester, Rachel, less than three minutes, from opening the box to having the scooter ready to use.

What about the instructions?

The instruction manual is a small booklet with text and a few photographs. Given the ease of assembly, this is more than sufficient. There are also safety warnings, maintenance instructions and information about the two-year warranty.

The website is well-designed and user-friendly, with the appropriate age ranges and features easy to find. There are helpful Q&As for each model, and Micro’s YouTube channel is well-populated with instruction videos. The one downside is that there’s no digital version of the instruction manual should you mislay yours, but there’s enough information elsewhere that you won’t be caught short. 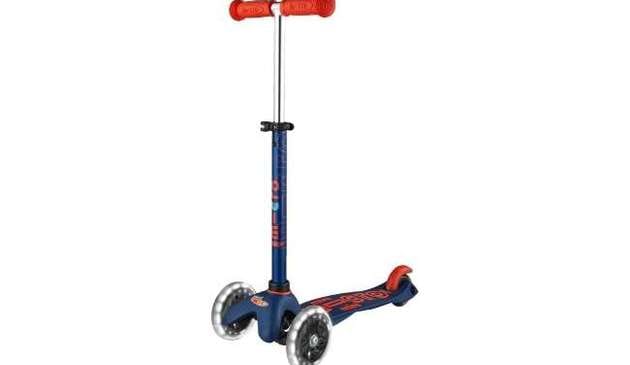 How safe is the Mini Micro Deluxe?

Intended as a child’s first three-wheeler, the Mini Micro Deluxe has to pass every safety test going – and we’re happy to report that it does. Crucially, the Deluxe complies with EU safety law EN:71 and international safety standard ASTM F963, both the relevant laws for this class of scooter.

The Deluxe has a fibreglass and anodised aluminium frame, tough polyurethane wheels, and silicone hand and foot grips. All the materials and finishings feel high-end, making it through the test period without degrading or breaking.

To get into the nitty-gritty, the T-bar reaches a max height of 67cm, which reached mid ribs on our tester’s three-year-old. Scooters can still be ridden safely when the T-bar is around waist height, but even at rib height the scooter is light and stable enough for a three-year-old to manoeuvre.

The adjustable handlebars are 26cm wide, with 12cm allocated per hand. With this and the wide wheel base, the scooter is extremely stable in motion, even on bumpy asphalt (though grass wasn’t much fun).

When weights were balanced on the baseboard, the Mini Micro Deluxe was well-balanced and hard to tip in any direction. When forced over to the side, the ends of the hand grips hit the ground first, but didn’t sustain any damage then or during general use. When tipped forwards, the moulded plastic between the front wheels took a battering, and did show a ragged edge by the end of the week-long testing period.

The baseboard is covered in grippy silicone, so won’t slip in the rain, and is 11cm at its widest with plenty of room for little feet.

Braking is a vital skill for new riders, and the Mini Micro Deluxe has a lightweight plastic footbrake at the rear of the baseboard that our tester’s toddler was able to master.

It was the first time she had ever learned to use a footbrake herself, and the design definitely made this easier. During the brake test, the Deluxe took 71cm to come to a complete stop, so bear that in mind when approaching main roads.

Any other safety concerns?

We tested the Deluxe version with LED wheels that use induction energy (not batteries), which does help with visibility but isn’t really a safety feature. Micro has included reflective strips either side of the brake, however, which is a useful addition. Do be aware when adjusting the height of the T-bar that the clamp can pinch little fingers.

What’s the Mini Micro Deluxe like in day-to-day use?

The Mini Micro Deluxe is a joy to use day-to-day and is a great option for the school run. Our tester's daughter took it to the park, skate park, library and nursery, as well as for a spin in a large empty car park. It was also used multiple times a day in the back garden.

The scooter makes it easy for a small toddler to kick off and go, with a smooth and well-engineered lean-to-steer mechanism. The lean-to-turn movement is a little looser than the age-equivalent Globber Go Up Comfort Play, so it will take some getting used to for a brand-new rider.

Once your rider is more familiar with it, the Deluxe is impressively speedy and easy to manoeuvre. Our tester’s toddler grew confident enough for – and revelled in – nerve-wracking speeds very soon into the testing period.

It doesn’t rattle or creak in motion – those big 12cm front wheels make for a shock-proof and smooth ride – and the hand grips are soft enough for small hands to hold. When jumped on, the kickboard bows just a little around the edges, but not significantly. The materials are high-end enough to stand up to any number of preschooler knocks.

How heavy is the Mini Micro Deluxe to carry and can it be folded?

One downside is that the Deluxe doesn’t fold but, at just 1.95kg, it feels impressively light and easy to carry with one hand. Our tester’s three-year-old could lift it over kerbs herself, which saves bother for a parent with their hands full. The standing footprint is only 55cm x 23cm, so even without folding it's easy to tuck away in a shed or garage.

Extending or reducing the height of the T-bar is a simple process, though our tester would have preferred pre-determined height options as with the Globber Go Up Comfort Play or 3StyleScooters RGS-1, which she also tested. Without them, the clamp has to be tight for the T-bar to stay put. The mechanism for removing the T-bar entirely is also stiff and took two adults to accomplish this. 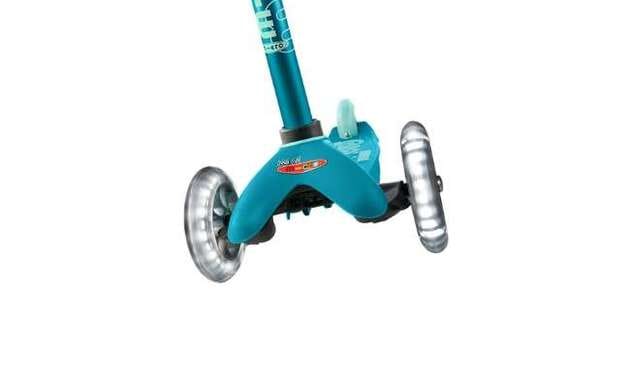 Is the Mini Micro Deluxe easy to clean?

Between muddy shoes and puddles, a scooter for this age group won’t stay pristine for long. The white silicone grips on the Deluxe’s baseboard get scuffed almost immediately, and will need a scrubbing to return to normal.

As mentioned above, the plastic moulding between the front wheels showed some ragged edges after our tester put it through its paces. Otherwise, though, the Mini Micro Deluxe came out of the testing period with only a few smudges. The wheels and hand grips didn’t discolour and there were no crevices where dirt could get stuck.

What is the Mini Micro Deluxe like to look at?

Micro Scooters has put a great deal of thought into the design of their flagship product – and it shows. Aesthetically, the Mini Micro Deluxe gives an immediate impression of high-quality, thoughtful design. The version with LED wheels that we tested comes in red, pink and aqua, but the regular Deluxe comes in blue, purple, navy, green and lavender as well.

Micro has also just launched an eco version of the Deluxe for preorder, with an ‘ocean blue’ baseboard made from recycled, discarded fishing nets: a lovely, timely addition and slightly cheaper than the LED Deluxe at £80.95.

It’s a striking range of colours that look bold and modern, with plenty of gender-neutral options. Our tester’s three-year-old gasped when her red model came out of the box, was especially taken with the “glittery wheels” and loved riding it.

Is the Mini Micro Deluxe good value for money?

As with all children’s equipment, the limiting factor is how quickly they’ll grow out of it. Our tester’s daughter wasn’t ready to ride it before the age of three, but the Deluxe is light enough for an unusually mobile two-year-old to manage it, so we think Micro Scooters’ age assessment of two to five years old is accurate. 50kg is a generous maximum weight, beyond even a 99th percentile nine-year-old, so a shorter child could even use it for longer.

The other consideration is durability and we think the Deluxe might well be nigh-on indestructible. Certainly there are many available via secondhand sellers, and most sell between £30 to £50. This is a decent recoup on your investment if you want to sell it on, and a good-quality bargain if you decide to buy secondhand yourself.

Of course, a £75.95 scooter is simply out of reach for many. But if kind grandparents bought it for a birthday, you’d have the assurance of being able to pass it on to siblings and friends. Or there are plenty of pre-loved models in excellent condition.

If you’re willing to fork out another £42.95 for the 3-in-1 Pushalong kit, the Mini Micro Deluxe can be turned into a transitional scooter for toddlers too. 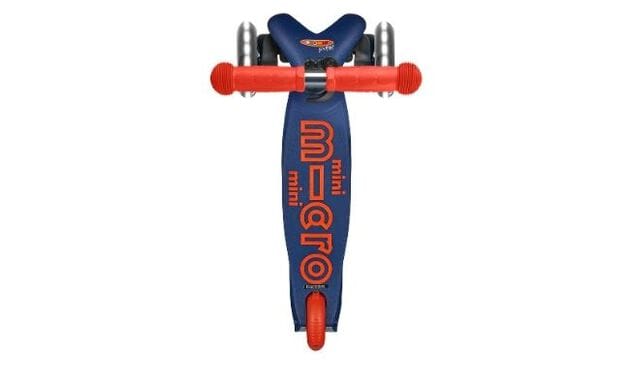 The Mini Micro Deluxe is speedy, impeccably designed, and safe enough to build a first-timer’s confidence and independence. It’s easy to dismiss this scooter as an Instagram-fashionable, expensive product for children, but it really does live up to its reputation – a worthy winner of our Best Scooter for Kids award.