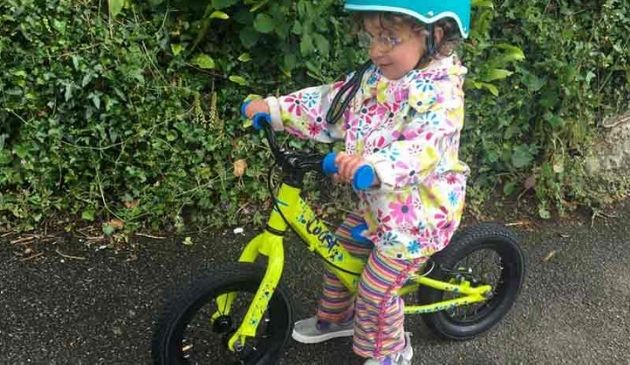 It’s very stable and appears well made. My two-year-old was able to get her legs up with momentum in very little time.

How easy is the Carrera Coast to ride?

Sidling up to top of the range mountain bike-style balance bikes, the Carrera Coast compares well as a bike likely to give your child a pleasant first experience of cycling.

The components and geometry are well-considered so, while it’s obvious on sight that it’s not quite on par with the Islabikes Rothan or the Frog Bikes Tadpole in terms of design, if you’re looking for a bike along those lines at a fraction of the cost, then the Carrera Coast more than fits the bill.

At 3.9kg, it's relatively lightweight – weighing significantly less than performance bikes such as the 4.9kg Ridgeback Scoot. As such, it’s positioned realistically as a bike for three- to five-year-olds, especially as 3.9kg could represent 26 percent of your three-year-old’s bodyweight. The average two-and-a-half-year-old should be able to operate it without any issue though.

Large and thick, the grippy pneumatic tyres give great traction, moving well over all terrain with good potential for covering a significant distance.

Easy to steer, aided by a well-angled fork, the Carrera Coast was a good get on and go option for our tester, Adele's, two-year-old daughter. With a wide wheelbase and a seat close to the rear wheel on its lowest setting, the geometry of this bike is far superior to others in its price range, such as the Kiddimoto Kurve.

It also features a Tektro handbrake which allows the bike to brake smoothly. While Adele's daughter found it reasonably easy to operate, it was a bit of a stretch to reach and she needed to really squeeze it to get the bike to brake fully. This wasn't a problem as she wasn’t yet at the stage where she needed a brake, but it may be something to bear in mind for older riders who would be cycling more adventurously.

The Carrera Coast comes with a steering limiter, which helps to prevent sharp turns and falling accidents but still allows a wide range of movement once your child progresses beyond the stage of picking the bike up to turn it around.

As with other bikes of this style, assembly would be arduous for most buyers but, as it’s a Halfords bike, it’s prepared for you in store. You don’t even need to secure the handlebars or measure the height of the saddle as store staff take care of those details, free of charge.

Free bike safety checks are also available as well as a maintenance scheme for a one-off fee. The Coast comes with a lifetime warranty that covers the frame and fork, and spare parts are available for sale on the Halfords website. 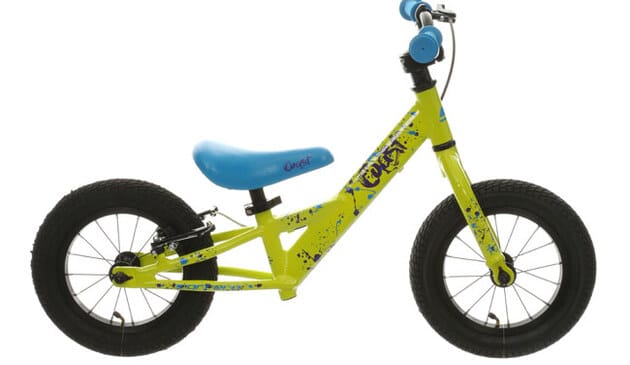 Adjusting the saddle height of the Carrera Coast is simple, albeit a bit stiff, with a quick-release adjuster that doesn't require any tools – perfect for quick changes when a growth spurt catches you out, but not something you'll want to do over and over again.

The saddle height only extends by a few centimetres, though, which means that the bike does accommodate growth but has a limited age range for comfortable riding. While Adele's tall five-year-old trialled the Carrera Coast and rode it with relative ease, she was not well-positioned for longer riding stints.

There isn’t an adjuster on the handlebar.

The Carrera Coast is generally very comfortable and our two-year-old was able to sit at a safe angle and lean forward without any difficulty. The grooves and size of the wheels afforded decent cushioning over bumpier surfaces and the seat’s long saddle made it easy for her to get on and stay on.

That said, she did find the saddle difficult to settle into at first. The saddle length seemed to give her a bit too much opportunity to shift around as did the lack of a dip (otherwise known as a 'scoop') in the seat, which you'll normally find on balance bikes. Though cushioned, the seat is quite firm and could become wearing once the rider starts taking on longer distances.

While brilliantly grippy and thoughtfully-sized for toddlers, the handlebars are also quite hard as there isn’t much in the way of cushioning.

All in all, the Coast ticks the basics but it doesn’t replicate the comfort features of higher-end options.

The Carrera Coast would more than adequately prepare a child to move on to a pedal bike.

Sporty and built to look like a classic mountain bike rather than a ride-on toy, the Carrera's style certainly matches its function. The pattern is almost Jackson Pollock-inspired – splattered multicoloured paint which you’ll either love or loathe – but it has the added advantage of camouflaging dirt, which also isn't noticeable on the bike's black wheels.

The seat did show some wear and tear during testing, with a patch of the cover rubbing off. Other than that, the bike appeared very durable and could be easily be cleaned with a damp cloth when necessary.

While our two-year-old tester didn’t seem to mind the bike's bright aesthetic, her five-year-old sister really wasn’t keen on the colours and, unfortunately, the bike only comes in one design.

Since you’re likely to be lumbered with the role of carrying the balance bike when your toddler gets tired, the lightweight frame makes it relatively easy to transport the Carrera one-handed back to your car boot, as long as you're not carrying anything else.

As with all the bikes we tested, the bike was ridden on pavements around town, taken to the skatepark and taken on a lengthy trail ride.

One downside is that the bike’s bolts do protrude and aren’t fully rounded. In time, this may mean that the bolts could get damaged, which would present a leg scraping risk, but a long wheelbase keeps them well away from where your child’s legs are likely to be.

Still, this is worth noting as it’s something that other manufacturers take into account – rounded bolts or cushioning within the frame are additional safety features that the Carrera simply doesn't have.

Also, because it's one of the bigger balance bikes we tested, it will take up some room when storing, but the steering limiter allows enough movement to stop it becoming too bulky. As such, it won’t hog much space in an average-sized car boot.

It's brilliant and my DS asks to ride it everywhere.

The Carrera Coast is a simple bike that does what it says on the tin. As it's not worlds away from its more expensive counterparts in terms of design and components, we think it offers good value for money, particularly as it seems to be perpetually on sale.

It isn't a bike that holds its value well though, which won't be great news if you're looking to sell yours on after use. But, if you're keen to buy second-hand, then this bike is well worth considering.

All Mumsnet baby & child product reviews are written by real parents after weeks of research and testing – this includes recommendations from the Mumsnet forums. We work hard to provide honest and independent advice you can trust. Sometimes, we earn revenue through affiliate (click-to-buy) links in our articles. However, we never allow this to influence our coverage.