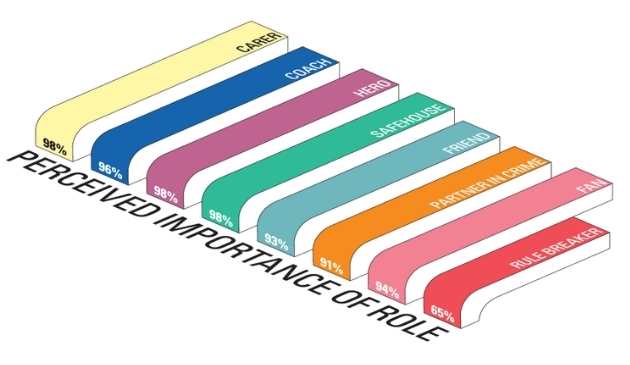 Saatchi & Saatchi conducted research with thousands of parents, looking into the roles parents play in their children's lives - dividing up daily tasks and the motivations behind them. It may not come as a complete surprise to learn that they found that mothers still take on the bulk of parental responsibility and are the ones predominantly fulfilling the role of Carer and Safehouse, while dads had more time for fun and breaking rules. But if we had a choice? Mums would love to spend more time doing the fun stuff. Here's a breakdown of the Motherhood: it's not a job findings.

The eight emotional roles of parenting

The study identified eight roles, and analysed them based on importance, the time spent doing them, and the desire to do them. As any multitasking mother knows, it turned out all of those roles were found to be fairly equal in importance, and are often performed simultaneously.

1. Carer: being there and in the moment

This is all about being in tune with what children need day-to-day, making them feel protected, cared for and loved - not to mention being there for a hug when they need it.

2. Safehouse: being there, no matter what

Safehouse means being one phone call away, the person your children call out for, and providing a safety net for them to turn to, no matter what happens.

MNers said: "This is one of the most important roles I feel, as all children need to feel they have a safe place to go and someone who will always look out for them no matter what happens."

3. Coach: being there even when you aren't

As a Coach, you're an adviser to your children, guiding and cajoling them so that they are ultimately able to live independent lives.

MNers said: "It's very important my kids understand the value of money. I am trying to teach my oldest about how to manage their personal finances. They have to work hard to earn it and know how to save it. I want them to know that before they go off in the real world."

Fans are the person a child wants front-row and centre for all their performances – whether it's a school play, football match, the telling of a joke, or talking about their day at school.

MNers said: "It's about listening to them sing you a private concert, being at their dance recitals, watching them laugh at Frozen for the 100th time."

5. Partner in crime: getting your hands dirty

In this role, mums have time to play with their children; making each other laugh and just having fun.

6. Rule breaker: not always being the disciplinarian

The Rule Breaker is great fun for a child to be around - spontaneously breaking the rules and ripping up the day-to-day routine.

MNers said: "Yesterday I let him draw on walls in the playroom – we are repainting next week so I figured why not? He couldn't believe I was letting him do it; he thought it was so fun. He was laughing the whole time!"

7. Friend: being on the inside

As the Friend, mums interact with their children as an equal, a mate - someone they can tell their secrets to.

MNers said: "I hope at the end of it all, when she's all grown up, she wants to be my friend."

8. Hero: being who you want your child to be

And the final role is The Hero - being a child's role model, the one they look up to, and the person they are inspired by.

MNers said: "It's so important, even when they see me mess up. They need to learn from my mistakes, and find out what is right and wrong."

Time is of the essence

Yep, there never seems to be enough time in the day to fit everything in. Because of this, mums tend to miss out on the more spontaneous and 'fun' aspects of parenting - the Rule Breaker and Partner in Crime roles.

MNers said: "I wish I could spend more time having fun, to be someone a child can let their hair down with and be themselves, no matter how silly."

In an ideal world a partner would share 61% of all roles and responsibilities equally, enabling mums to be less Housekeeper and more Rule Breaker so that they have the freedom to let go more often.

Saatchi & Saatchi conducted quantitative research through a nationally representative survey of 1,022 mums in the UK (responses gathered in December 2014). They also conducted two Mumsnet panel surveys consisting of more than 1,800 parents. For the purpose of the research findings, mums are defined as women with children under the age of 16.

Mums in lockdown: 60% say the pandemic has had a negative effect on gender equality