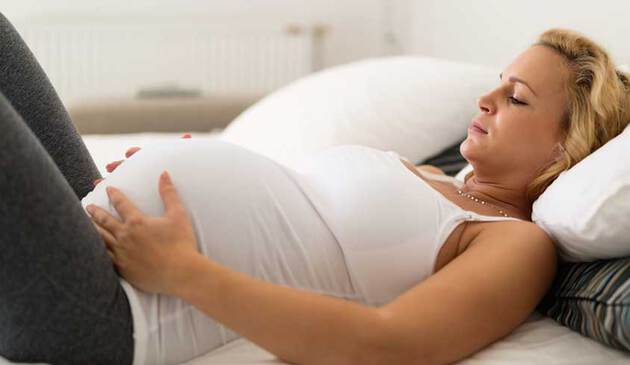 What happens in the first stage of labour?

Labour comes in three “acts” and the first one is the longest. A bit like a Shakespearean history. Things can actually kick off a good few days before you notice any signs of labour with your cervix beginning to soften and “efface”. It's an exciting moment when you realise it's all happening – particularly if you're overdue and have been keen to get labour started.

During the first stage of labour your cervix – the neck of your womb – dilates to a rather incredible 10cm (yes, we did say 10) so that your baby can squeeze his or her way out. Understandably, this can take a while – typically, at least 12 hours in a first pregnancy (although it can be much longer). And this initial stage is divided into three separate phases: the early, active and transitional phases.

If this is your first child, you're probably wondering how on earth you'll know the difference between each of the three phases in the first stage of labour. So, to help you out, here's how the whole miraculous performance breaks down.

What happens in the early phase of labour?

Also known as “latent” labour or pre-labour, this is the very start of labour when your contractions begin, sometimes starting as Braxton Hicks , and eventually causing your cervix to fully efface and dilate to three to four centimetres in width.

Before labour, your cervix is like a long, firm, closed tube. As labour nears, your body releases hormones called prostaglandins, which make the cervix soften and “ripen” in preparation. These early contractions cause your newly-softened cervix to move from a posterior position to pointing forward, become paper-thin and drawn up into the uterus, ending up in a ring rather than tube shape – a process known as effacement.

“Effing what?” we hear you cry. Quite. A good comparison is to imagine your cervix as a turtleneck jumper and picture rolling down the turtleneck before stretching it open so that you can shove your head through – effacement's that first rolling down bit. It's measured in percentages, but getting from 0% (not at all) to 100% (fully effaced) – whereupon your cervix can start to dilate in earnest – can take anything from minutes to days. With second and subsequent babies it all happens more or less in one go and much more quickly. 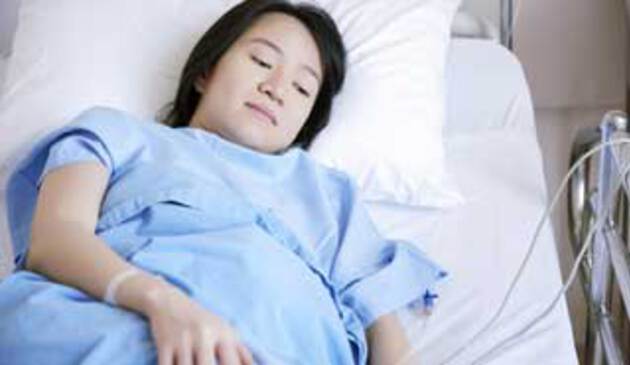 Typically, contractions during the early phase are mild to moderate (you can talk through them); each lasts about 30 to 40 seconds and they start off being irregular, coming anything from five to 20 minutes apart, and possibly even stopping for a while.

Contractions can be erratic for several days before things start in earnest. Some poor souls experience full-on contractions even though, particularly with first babies, there may be very little actual dilation action.

On average, for first-time mothers, this early phase lasts from six to eight hours, but everyone's different and timings can differ wildly either way. It can be completely exhausting and demoralising to be in what feels like full-blown labour for ages and still only be 1cm dilated. Rest assured that if you turn up at the hospital armed with your hospital bag only to be sent home for being way too early, you won't be the first.

Call your midwife if you have any concerns, but try not to get too stressed: remember these are not wasted contractions, they're preparing your cervix for established, active labour.

What should I do during early labour?

It's best to stay at home for as much of early labour as possible. You'll be more relaxed in a home environment than in hospital, which will help things move along more quickly. In the meantime, you could pass the time in any of the following ways:

What should a birth partner do during early labour?

Practical stuff is helpful at this stage – they can make sure your bag is packed and ready to grab as you head out the door, make your environment a calm and relaxing space, perhaps by dimming lights, and ensure you have anything you need such as snacks and drinks. They can also reassure you and help keep track of how regular contractions are.

During the early phase, I had very brief contractions, four minutes apart for 16 hours – and I got sent back home from the labour ward as I was only 2cm dilated!

What happens in the active phase of labour?

Also called “established labour”, in medical terms this is when you're fully effaced and about 3-4cm dilated. Typically, it lasts around six to seven hours if it's your first labour, and finishes when you're 8-10cm dilated.

Once active labour begins, contractions typically increase in frequency, length and intensity as the uterus boosts its efforts to open your cervix. If you haven't opted for pain relief, the contractions will soon be too strong for you to talk through them – although, strangely, you may find you're still able to turn the air blue.

Once you're in really active labour, contractions will be coming every couple of minutes and last around a minute.

But everyone's different, so don't worry if things go more slowly than the pregnancy books lead you to expect. The strength of your contractions and the position of both you and your baby have a big impact on how quickly things will happen.

That said, if your waters haven't already broken by this point and your labour's progressing slowly, your midwife might suggest she break them as this can help speed things up. Called an artificial rupture of membranes (ARM), you will also have to have this done if your baby needs internal monitoring.

Once you're in established labour, your contractions will come faster (every three to seven minutes and getting gradually closer and closer together). They tend to last 60 to 90 seconds each. 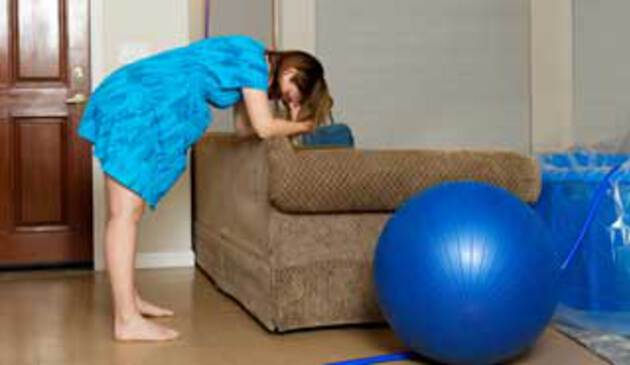 Tips for coping in active labour

Active labour is where things ramp up a bit. This is the stage at which you go to hospital and ask for pain relief if you want it.

What should a birth partner do during active labour?

This is where you hope they were the one listening carefully during antenatal classes. Your partner can help your with your breathing, seeing you through each contraction. They might also be useful in helping you to change position and get more comfortable.

If you want pain relief, a birth partner is often very handy as an advocate for you, reminding the midwives of your wishes on your birth plan and finding out what your pain relief options are and chasing them up. They might also be on hand to rub your back if you find that eases the pain slightly.

The early phase was like wind, but stopping and starting – I laughed through the contractions. But the active phase hurt a lot. I had a home birth and nothing helped. I got in the bath and out again, nothing was really of any use.

What is “failure to progress” in labour?

Failure to progress, or in posh scientific language, “labour dystocia” is when a baby's descent down the birth canal and/or the dilation of the cervix stops or significantly slows down. It's also known as dysfunctional labour or difficult labour (terms all guaranteed to make a knackered mum feel completely useless) and usual causes include:

If your labour's going slowly, try to stay calm: rather cruelly, fear and anxiety cause an increase in adrenaline, which relaxes the womb, and a decrease in oxytocin, the hormone that causes contractions.

Where weak contractions are the cause your midwife might suggest breaking your waters. You may also be offered an intravenous Syntocinon drip – this is artificial oxytocin to stimulate the uterus and increase and strengthen your contractions.

Subsequent stronger contractions can also help to turn a baby into the right position.

“I wasn't making much progress so they stuck a drip up: cue a desperate urge to push, which I spent the next couple of hours fighting as my cervix wasn't ready. Then I was given an epidural to stop me pushing: cue nothing for several hours. Eventually my daughter was yanked out with forceps, which was OK. I was so knackered by then I didn't care if the baby was hauled out of my nostril, so long as she got born”

What happens during the transitional phase of labour?

Transition is the bit where things get a bit weird – it's the stage between the main contractions and pushing your baby out.

It feels different for everyone, but many women report feeling shaky and shivery (now's the time to get out those bed socks you dutifully packed in your hospital bag. Other women say it feels like a “calm before the storm” moment, with contractions briefly slowing or stopping, allowing you to gather your breath for the final push.

Traditionally, however, it's the point at which women stand up, rip up their birth plan and announce they are going home and they don't want a baby after all. If you look carefully, you may well catch your birth partner and midwife exchanging a knowing look. Try not to turn them to stone with your filthiest look in return. 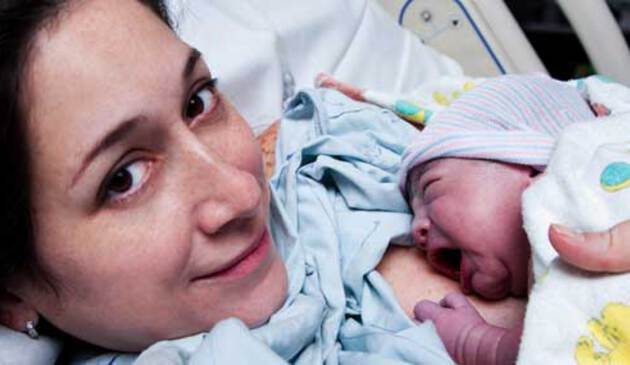 What can you do during transition?

Do whatever feels best to get through it. You might want the lights dimmed or just to put a blanket over your head. Focus on only the present moment and try to breathe deeply and stay calm. If you panic at this stage, it can all fall apart a bit – so just ride it out and know that you're not far away from pushing your baby out.

You might want to try a new position now and see if you can find a more comfortable one. If you feel the urge to push, however, don't. Try to pant instead, which can help you to hold off pushing.

How can a birth partner support you during transition?

This is the moment when support from your birth partner can really help, in keeping you calm and focussed (and possibly leading you by the hand from the exit door back to the delivery room). They might also like to fetch you some socks and a blanket if you're shivery, throw the windows open if you're hot and generally be some sort of superhuman rock for you to lean on.

I remember throwing up and refusing to get out of the bath and generally being chastised by midwives for being a wilful patient.

What happens at the end of the first stage of labour?

Once you reach 10cm dilation, your body gets ready to push (transition). Your midwife will have been checking to see how dilated you are and doing checks on the baby's heartbeat, too, as the first stage progresses, so they'll be able to tell you when you're ready to push. Mostly, though, you'll know because it's almost impossible to do anything else. A comforting fact to bear in mind is that even if you did no pushing at all, your body would push your baby out regardless.

At this stage, focus on what the midwives are telling you and just muster your every last bit of strength for the second stage of labour – giving birth.

7 best TENS machines to use during labour