Hi,
Only just joined and first post here, looking for some advice please as I don’t know what I should do. My son has recently turned 18, a few months back I confronted him as I had a suspicion he was or had tried vaping. He said that yes he had tried it a couple of times with friends, but wasn’t really his thing, although he has friends that regularly vape. I genuinely believed him and was relieved, (I do realise there are far worse things teens and young adults can be doing) but for me this was quite a big thing. My father has lung cancer and has been receiving treatment so everything crossed and hopeful the treatment will be a success.. My son is also aware that other than the fact I am anti-smoking/vaping anyway the fact my father with the lung cancer is also why I feel so strongly about it.

I have recently found another vape in his room, wasn’t searching for anything it must have fallen from his pocket. I haven’t said anything to him yet about it and don’t know how I should address it. I am well aware he is an adult and can make his own decisions but I’m struggling with this. I don’t want to just let it go and accept that he vapes,(how frequent or infrequent I don’t know) I am sure I could smell weed when he came home the other night from a friends house, but as yet haven’t directly brought it up, as he would only get annoyed and deny it. He does know I suspect something. Tbh I also don’t know if he was doing anything or if he was around friends that had been doing it as the smell lingers. He has previously stated that he would never do drugs of any kind. It’s making me so unhappy and with the other stress and worry of things I just don’t know how to approach it with him. We are in the house along with my father and apart from the fact I don’t want him to be getting involved in anything like this regardless, I worry about the kind of lifestyle and health issues it would bring for him. I find it unacceptable he’d be doing this with my dad having the lung cancer. Any advice would be grateful, I hope and pray that this is something we can get past, that’s it’s a bit of experimental stuff and he stops but I don’t want to allow him to come home after possibly doing such things. I’m at a loss, I know if I confront him it will be denied and end up in arguments anyway,. It’s so hard to not get mad and shout when you know they’re lying, (about the vaping anyway). So any advice appreciated, i will just add it’s not the kind of thing he’s ever done before. Has only just finished last year at school and has an offer for uni, but since turning 18 has been going out loads at night, he doesn’t have a job but did get some birthday money which is what he’s been using for his nights out etc. I don’t mind the fact he goes out, I was young once myself and would often go out to clubs etc, it’s just I find it really hard to trust him now. Thanks for anyone taking the time to read/reply.

Hi it sounds like your son is just going through a stage of experimentation like most people of his age. Most young people in the U.K. do not vape at all. Of those that do most don’t vape regularly or had previously been smoking. Vaping unlike smoking does not cause cancer nor is there any risk from second hand exposure. There is also no credible evidence that vaping is a gateway to smoking. Have you asked you son why he tried it ?

My DS has taken up smoking cigarettes, knowing how I feel about them after his dad died from lung cancer. He is depressed but won't access therapy or see the GP. It worries me, but I'm hoping he will stop (he smoked for a few months during lockdown then stopped, but started again a couple of weeks ago). I would much prefer him vaping to smoking.

Cigs were part of my mother's relatively young death (not cancer, pneumonia)
DD vapes. I was just pleased she took to vaping having smoked earlier.
Of course it's shit, she should stop, but sometimes you take small wins where you can.

Hi , I'm sorry you have found your son has been vaping. Mine was 13 and more and more this young are experimenting with it. It is visually attractive to them, cartoon and sweetie images, and lots of great flavours etc. While children will always push boundaries and experiment we will see that more will try vaping than really should be if it is made to look this appealing and readily available.
I have just uploaded a post about a petition I have running to do with vaping and it's appeal to our young children. If you would like to sign it please do as the more it gets exposure the more likely the government will act on this problem.

petition.parliament.uk/petitions/618911 this is the petition.

Please also share this petition with any friends/family on your own social media platforms. Action is needed now!

Image shows the delicious looking products I found my son had gathered up. He is now not vaping, I weaned him off and he met with our MP last week to help with this campaign. 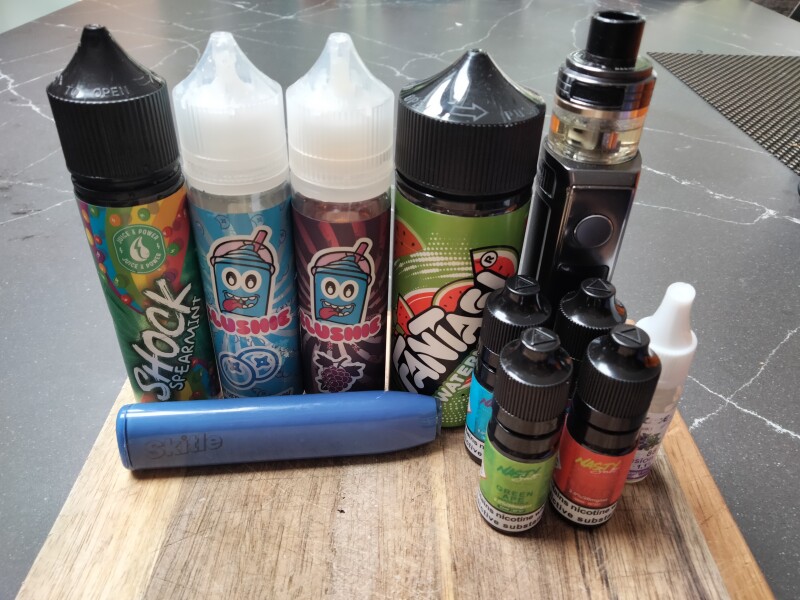 Thank you to all who have replied. I am sorry for those who have lost loved ones to smoking, @CthulhuInDisguise it really is heartbreaking, esoecially when they know first hand what can happen it just maddens you more. I do hope your son can get and takes the help he needs. I agree too with the other comments @lljkk about taking every small win when you can and even although there is no where near the data or evidence from these in comparison to cigarettes, I can see why you’d be relieved that it would be a vape over a cigarette.

They absolutely have there place of helping people to come off the cigarettes. It’s how it seems to be marketed now, a trend to take it up, with people who previously have not been smokers at all. I completely agree with @Maria318 with regards to the flavours etc, to me it definitely seems aimed at a younger crowd, although I’m not saying limited to. Did your son seem to have an addiction to them when you say you ‘weaned’ him off them? That’s really great that you managed to help him and he took heed of your advice. I really hope my son takes my advice on board too. Anything that can be done to deter people from starting it up, rather than using it as an alternative I am all for.

@Jdunne9407 it just seems to me that it’s a new thing being ‘taken up’ as opposed to an alternative to help smokers get off cigarettes which from what I’m aware was the intention of them. You seem to be fairly knowledgable about these, I just try to get though to my son that surely no good can come from vaping, no positives at all, let alone the fact it is costly. Likewise with smoking weed/marijuana, I have no evidence he has although as I have said suspicions. I do know that one/two friends do smoke this stuff and have said how against it I am, Tbh I think he could see the other day just how Ill the whole thing is making me, I have said all I can , that I know he is now an adult and I can’t tell him what to do, I just hope and pray that he has taken it on board. x

Yes, he was totally addicted by the time we caught him red handed. He came to us with all his products in hand and cried. We stayed calm and said we will look at what we can do and then talk about it. I went to a dedicated local vape shop and asked for advice and got him a refill vape and started on a nicotine dose just below his current (as the guy in the shop said, high dose he was using we don't sell they are not good). I then reduced nicotine down every two weeks until he was on zero. At which point he carried on as with friends it was expected but after a family holiday and starting my campaign plus his friends doing similar to him some of them are now not vaping. I hope it continues but will keep a close eye. Importantly he trusts me to help when he asks and not shout!

I told him I blame most of it on the way these products are so appealing to his age group. 13 was the age he started. You expect 16+ but not 13.

Vapes are not intended for use by non smokers yet they are stacked high on the counters at every newsagent like sweeties. Colourful cartoon images make them attractive to our young children and the vapetricks videos across social media create a want to try.