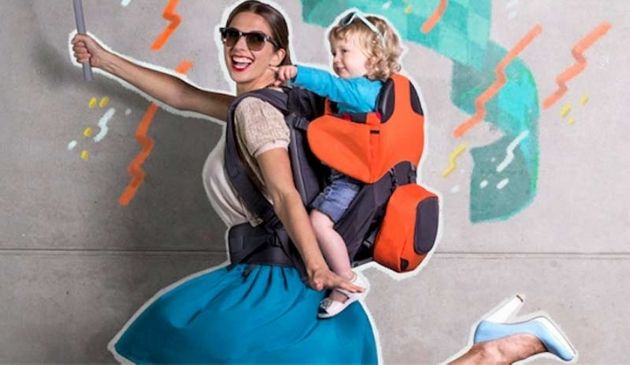 The Phil & Teds Parade is innovative, super compact and just a bit more special than your run-of-the-mill baby carrier. It’s a classic-looking model that is neat and great for an urban environment. 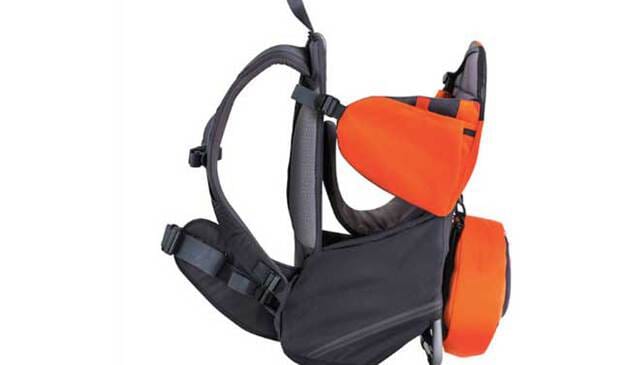 Is the child carrier backpack easy to assemble?

Our tester had the Parade (and smiling child) strapped on his back within a matter of minutes. You won’t need to reach for the instructions – which are very good, we might add – because the design is logical and everything fits into place without any head-scratching. The five-point harness and clips are sturdy and they don’t pinch skin or catch hair (we make no promises that your baby will do the same though).

Once it’s out of the box, you just unfasten the buckle, pull out the footstand and pop your child into the seat. The traditional waistband clicks around your waist and adjusts to your shape with a quick tug.

How safe is the child carrier backpack?

The carrier should only be used once your child can sit up unaided (around the six-month mark, but this does differ from one child to the next) and they should never be left unsupervised in it. The Parade can be adjusted to allow your child to sit higher than you in the carrier, so you do always need to be mindful of where they are in relation to door frames, low-hanging branches etc.

Although the carrier is lightweight, it does start to feel heavy when you’ve been wearing it for long periods of time and does affect your balance slightly. We advise you keep the physical activities relatively sedate for everybody’s sake, though you probably weren’t going to go parkouring wearing your baby anyway.

Phil & Teds also warns you that your child will be more susceptible to changes in weather while in the carrier, so take regular breaks and make sure they are appropriately shielded from the elements.

Our tester felt his son was always nice and secure while fastened in the five-point harness but he did find it was lacking in the extra comfy padding that is used in some of the other carriers he tested. Despite being padded back and front, there isn’t as much head support as you might like, but there’s more than enough padding to keep your child’s head safe from the frame and any bumps along the way.

How good is it day to day?

While the child’s padding on the seat left a bit to be desired, the padding for the adult wearer could not be faulted. Our tester surmised the lack of padding on the child seat could have something to do with the fact the child would be in and out of the seat multiple times, whereas the adult would most likely have the bag on for longer and need the extra support to ease the burden of the child, which is a fair point.

Because the carrier is designed for city-wearing and travelling by plane, it doesn’t feel too bulky. There is also the added advantage of feeling like your child is close to you at all times. You can get in and out of a (relatively busy) tube train easily and not feel like you’re at risk of doing damage to yourself or others.

Phil & Teds Parade has excellent storage for a small carrier. It has large pockets (for water bottles or snacks) and you can reach the contents without taking the bag off. This is such a bonus. Even the lightest carrier is a bit of a faff to get off and on again, especially if your child isn’t in the mood.

A standout feature of the carrier is that it, well, stands up by itself. This means you can whip it off your back and nudge the legs out while you perform a swift nappy change and have a quick stretch before putting it back on. A lot of carriers aren’t free-standing, so you often have to fight with them or prop them up against something, by which time your child is getting restless and might not want to get back in the seat.

The Parade carrier is so lightweight that a mum or dad of pretty much any height or build can put it on their back without the help of a second person. This is naturally a real advantage and saves you precious time. 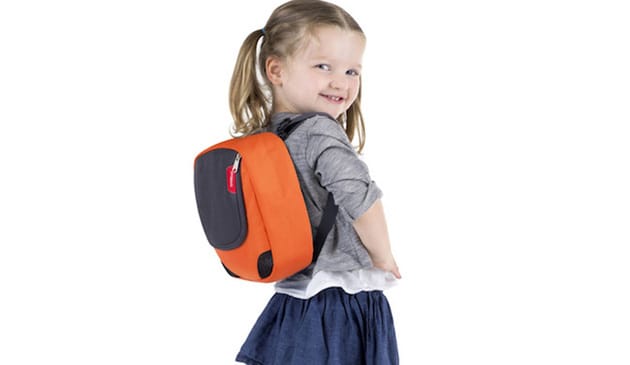 Is it easy to get a child in and out of?

The carrier opens quite wide, making it nice and easy to get your child in and out of the seat. Our tiny tester really enjoyed being up at the same height as the grown-ups and not having to look at the back of their heads.

The Parade comes with an adorable toddler backpack which can be detached and worn by your child when walking around. It clips onto the main bag really easily and doesn’t make the carrier look or feel too cumbersome. Our tester found the little backpack slightly irritating when trying to navigate confined spaces but his son loved wearing it and looking like his dad. It’s also useful for a bit of extra storage should you need it.

Is it easy to transport?

The aluminium frame easily collapses to make it really compact. It takes up very little room in the car boot and is great if you’re off on a camping weekend with all the family kit. Unlike other carriers, the Parade doesn’t take up much space when it’s not in use so it would easily squeeze in a cupboard rather than using up valuable loft space. It’s also exactly cabin size, so it’s great for long-distance travel on trains and planes. 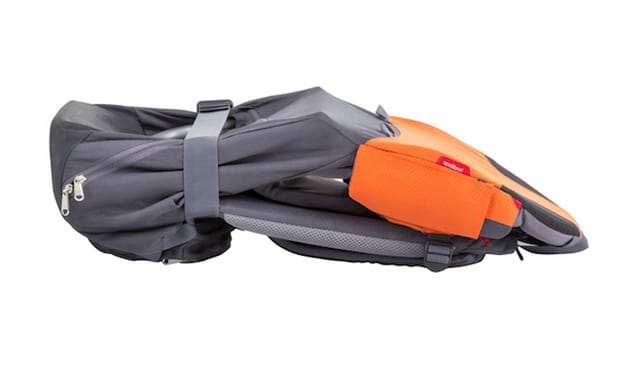 What is the carrier made from?

The Parade frame is made from aluminium so it’s strong and lightweight. Your child will appreciate the padded, adjustable seat which is designed to be super comfy and supportive. Our tester thought it could have been a little bit more padded but it’s still a comfy ride. High-quality fabric (300-600 denier) is used throughout the bag, so it shouldn’t tear or break easily. On the outside, the Parade is made from synthetic, waterproof material, so it stands up to the elements no bother.

Thankfully, the Parade is easy to wipe down. The blue and dark grey fabric is great at hiding everyday dirt (and dried-up carrot/rice cakes/milk/raisins stuck to the fabric).

Does it offer good value for money?

This carrier offers excellent value for money. It’s fantastic for a holiday or using in and around towns and cities. The Phil & Teds Parade would be ideal for someone who likes to use a soft carrier normally but needs something a bit more sturdy occasionally. It’s not designed for very long walks but it’s perfect for an hour or so before taking a short break and strapping up again.