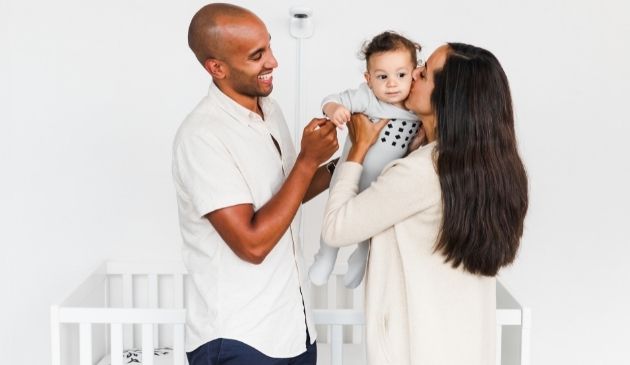 Nanit has been working with parents since 2016, using innovative technology to help them feel more reassured of their child’s wellbeing, particularly during the early months.

The Nanit Pro is the newest of Nanit’s video baby monitors, which have been a roaring success with parents who appreciate a little extra security and peace of mind. Our MNHQ parent tester, Iona, tried it out at home over several days and reported back on her first thoughts and favourite aspects. Our other parent tester, Cat, tried out the Nanit Breathing Band with her six-month-old son.

The Nanit Pro is suitable for anyone with a baby or child of up to two years, though you can, of course, use it at whatever age you like.

It’s definitely at its most useful in the early days of putting your baby down for a nap in a different room, or when you eventually move their cot into a nursery. And it’s particularly handy with a first baby when many parents need some extra reassurance.

If you or your partner occasionally work away from home, the Nanit Pro can also be used to check in on your baby, see them go to sleep or wake up, and even let them hear your voice from afar.

The Nanit Pro has quite the hefty price tag for a baby monitor, so we were keen to see whether it would live up to our expectations.

Even without opening the box, you can see you’re getting more for your money than with a standard, run-of-the-mill monitor. We tested the Pro with the floor stand and the whole thing came neatly packaged in one box, with each piece nestled in robust black foam. As well as the stand and the monitor itself, the bundle included a small-sized Breathing Band (more on this later), which is one of the features we think really sets the Nanit Pro apart from the crowd.

If you’re already familiar with the original Nanit Plus, there are a few things Nanit has improved on for the Nanit Pro. Firstly, the image quality is much better, which is no mean feat considering it was pretty good before, and we particularly like its night vision, which is something a lot of monitors, even at the top end of the market, struggle with.

There’s a new status light which is now separate to the nightlight as well as a new reset button, which makes it easier to reset and to dismiss the emergency alarm should it go off. An ambient light sensor also makes for a smoother transition between day and night mode, so there are no rude awakenings for your baby. All in all, it’s just a bit smarter, smoother and slicker than its older counterpart.

Related: The best nightlights for babies and toddlers

All the pieces of tubing simply click or turn into place. The stand is placed behind your baby’s crib at the centre, with a bracket to keep it in place. It also works freestanding if you prefer, which gives you more flexibility if you want to move your baby’s cot around your home or put your baby down for a nap elsewhere.

Once the stand is put together, the camera clicks into the top of the stand and can be swivelled to point exactly where you want it. The tubing at the bottom takes the wire to the mains without leaving any cords free to trip you up on nighttime jaunts to the nursery.

Setting up the camera is simple too. Once it’s clicked into place, you just download the Nanit app and pair it with your camera. The app needs a few details from you such as your baby’s name and age, but it then guides you through positioning the camera and setting up exactly where your baby’s ‘sleep zone’ is.

We didn’t try out the wall mount during testing, but it looks equally fuss-free to assemble. You can also buy handy accessories, such as a multi-stand so the camera can be used anywhere it’s plugged in as well as a travel case to keep all the monitor parts together. 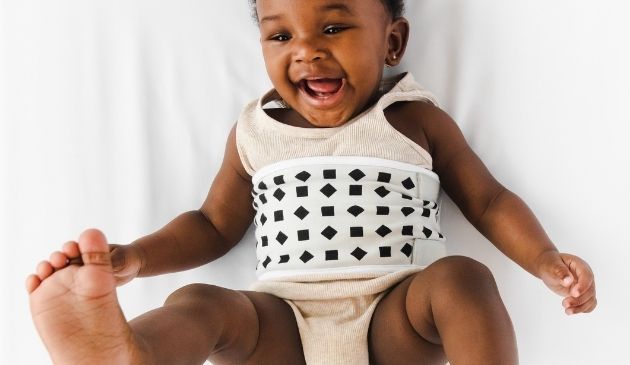 The Nanit Pro offers lots of features you won’t find elsewhere and chief among them is a free subscription to Nanit Insights (£50 value), which offers useful additions such as a sleep analysis to track your baby’s sleep patterns as well as the ability to save and share memories with family and friends.

It’s worth being aware that you only get this subscription free for one year, after which you have to pay a monthly fee which rises according to what sort of features, data and memory you want. The fee is one of the main downsides we spotted. While it’s only the price of a fancy coffee a month, you’re being charged to use many of the available features Nanit has to offer after you’ve already shelled out almost £400 for the monitor itself.

That said, the features with Insights are pretty great. The main draw for nervous parents will be the Breathing Band monitoring system. Lots of monitors link up with mats or other gadgets that monitor your baby’s breathing but they can be a bit unreliable, leaving you racing to your baby’s room fearing the worst, only to find they’ve simply rolled over.

Nanit’s solution is much more sophisticated. The included Breathing Band attaches below the baby's shoulders with Velcro. The camera then reads the black pattern on the band to sync up with the app and start tracking your baby's breathing in real-time.

If the camera spots no motion for 20 seconds, an alarm will go off on your phone or the camera itself (or both). If you can see it’s gone off erroneously, you can quickly and easily dismiss it from the app. You can also watch your baby’s breathing being monitored by pressing the lung symbol on the app dashboard.

The band is really easy to set up and the app gives clear instructions on how to secure it to your baby safely. You have to be careful not to fasten it too tightly or put it above the shoulders, but it works well and gives clear readings all night.

There’s a 100% cotton Breathing Wear, pyjama sleepsuit and swaddle available as well as larger sizes of the breathing band, all suitable up to 24 months. Although there’s a small size Breathing Band included in the box (0 to three months), if you want to use the breathing monitor regularly, you’d need to buy an additional band suitable for ages three to 24 months (£19.99), or a couple of swaddles or sleepsuits.

We love the sleep tracking feature on the app, which works a bit like a Fitbit, telling you when your baby went to sleep, when they woke up and how many times they woke in the night.

You might argue that, after a terrible night with a wakeful baby, the last thing you need is an app rubbing your nose in it, but it’s actually really heartening to look back and see how much your baby’s sleep has improved over time.

We also enjoyed the video clips and particularly the heat map videos that show your baby’s movements throughout the whole night. They’re just a bit of fun, but are great for sharing by message or social media with grandparents or other family members who live far away.

If you or your partner have to be away overnight, it’s also a really nice way for them to keep in touch and feel like they’re not missing out on anything at home. You can add users to your Nanit app for easy video and memory sharing.

Fun though all those nifty little features are, it’s the core skills of a machine like the Nanit Pro that really matter. Things like image quality (which is really excellent, even in the dark) and the monitor’s reliability are both areas in which the Nanit excels.

The instructions tell you the camera should be set up no more than six metres away from the wifi router, but we used it with absolutely no problems two floors up and on the other side of the house from the router. There’s a very slight time delay on the feed, particularly on sound, but it’s a negligible second or two, so no real issue there.

We think the nature sounds and white noise are a nice touch too and likely to go down well with sleep-deprived parents. Being able to slowly reduce the volume of the waves or wind before gently dimming the nightlight is so much more civilised than a tinny version of Brahms’ Lullaby coming to a sudden halt.

Related: The best baby sleeping bags as tested by parents 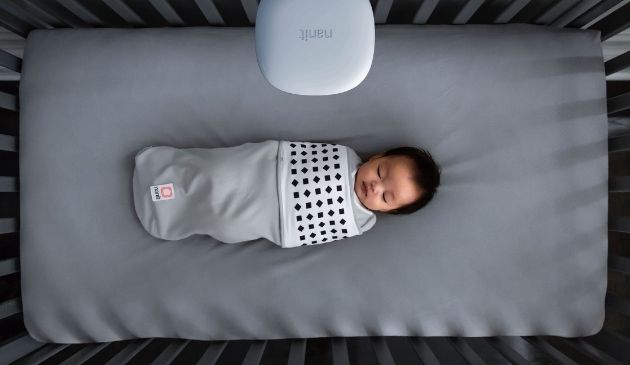 There’s no disguising the fact that this baby monitor is definitely not a budget option. The Nanit Pro is £299 with the wall mount and £379 with the floor stand, and the extras don’t come cheap either.

However, Nanit does offer a 10% discount on a bundle of three items including the Breathing Wear and travel accessories, which could easily save you a three-figure sum, and makes the total outlay a bit less of a hit on the wallet.

Happily, there’s a 45-day happiness guarantee with the Nanit Pro so if you like the look of it but aren’t completely sure, you can buy in the knowledge that you can return it for free with no quibbles. It also comes with a one-year warranty.

The Nanit Pro is an exceptional piece of kit with loads of useful safety features and little extras that make it fun to use. We haven’t seen anything quite like it on the market; lots of models have some of the features the Nanit offers but none quite go the whole hog.

As we’ve already touched on, the one disappointment is that so many of the features require a subscription to Nanit Insights, so you need to think carefully about how much you’d use features like the video clips, sleep history and personalised sleep tips, and whether you’d be happy to pay on an ongoing basis. The basic package is free for a year but then costs £5 a month or £50 a year for the basic access, rising to £10 a month or £100 a year for the Premium access with 30 days storage and all the bells and whistles, or Ultimate with unlimited storage for £30 a month/£300 a year.

We also like the idea of the parent community on the app but found it wasn’t terribly well populated yet - hopefully that will get going with time when more users come onboard.

All things considered, we were left with one simple question: what’s the price of total peace of mind? If you’re something of a nervous parent or are parenting for the very first time, the Nanit Pro really does feel reassuring.

From being able to see the movements of your baby’s breathing being carefully monitored to having sleep tips customised for you delivered straight to your phone, it really feels like having a hand to hold which, in our opinion, can only be a good thing.

We give all new products a thorough once-over, checking that the features are as good as they say and that the product functions as it's supposed to. This isn't an exhaustive test of the product or how well it performs – look to our Reviews content for extensive testing in real-life situations.

Rather, our First Look features are informed previews, providing a basic overview and getting a feel for the product’s most exciting features.

Reviews Preparing for a newborn

The 10 best pushchairs and prams suitable from birth

The 10 best breast pumps as tested by parents