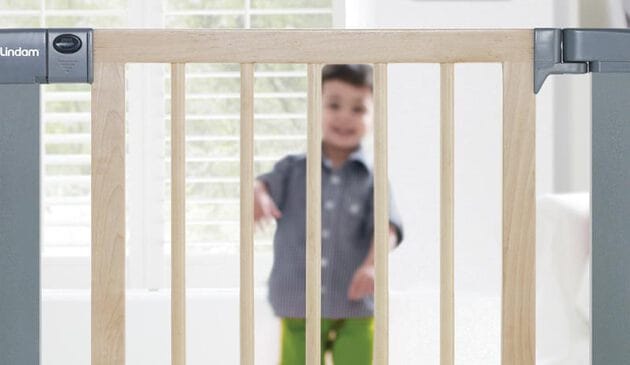 What are the key features of the Lindam Sure Shut Deco stair gate?

How big is the Lindam Sure Shut Deco stair gate?

This pressure-fit stair gate is more than just a thing of beauty though. It’s versatile and can be used in doorways and at the bottom of stairs. It can even be adapted for spindle banisters with a fixing kit (sold separately).

The Sure Shut Deco is slightly less robust than other entry-level Lindam stair gates, because the wood is more pliable than metal, but it makes up for this with an exceptionally easy-to-use open-and-close mechanism.

How easy is the Sure Shut Deco stair gate to assemble?

Lindam pressure-fit stair gates have a reputation for easy assembly, and the Sure Shut Deco is no different: it arrives in one piece and your only task is to screw in the four gate-adjusters, stick the four wall cups to the wall (using the sticky pads included) and tighten the bolts with the helpfully provided spanner. Even a DIY novice can crack this in five to 10 minutes, tops.

The instructions might be diagram-only but the process is intuitive enough to sail through. The company video will talk you through any sticking points.

Like most pressure-fit gates, the Sure Shut Deco is intended for doorways and the bottom of stairs; pressure-fits aren’t considered strong enough to be safe at the top of stairs, and can’t fit in wonky doorways because the pressure needs to be even at all points.

We’d advise you measure carefully before you place your order, and refer to the helpful Lindam graphic on its website to work out which configuration fits your space best. If the standard-size isn’t going to cut the mustard, the Sure Shut Deco fits Lindam’s universal extensions which come in three sizes (7cm, 14cm and 28cm) for an extra fee and can be paired in various combinations. Don’t forget to register your gate with Lindam within 30 days of purchase to secure its lifetime guarantee.

Once up, the stair gate takes the knocks of family life with little visible wear and tear. It’s wipe-clean and doesn’t show fingerprints – a toddler holy grail if ever there was one – and has been designed to remain safe and sturdy. At £50, it’s considerably cheaper than other gates at the luxury end of the market, but it’s stronger and more reliable than its competitors. 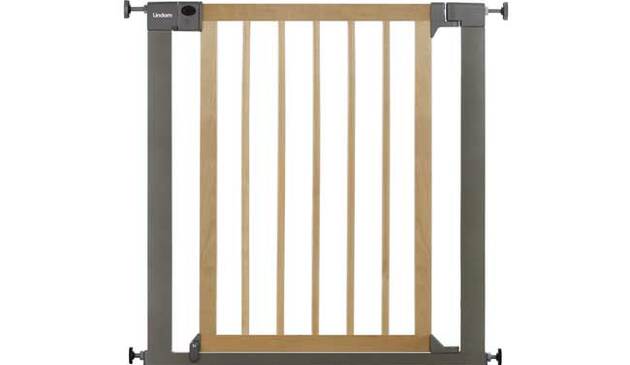 How does the Sure Shut Deco stair gate work?

The Sure Shut Deco is Lindam’s stylish contribution to the market – the only one of its pressure-fit gates to be made from a sleek combination of metal and birch wood. It’s not just a good-looker, though: it also benefits from a particularly simple open-and-close mechanism which is perfect for older siblings and for quick, easy access at night.

To open, squeeze two buttons and press down; to close, push the gate and the latch clicks into place by itself. Both can be done one-handed and without thought. Watch out for that closing mechanism – the gate can bounce back unless shut with a little force. We think swinging it with a little force many times a day over a long period of time might eventually lead to some deterioration in the fittings (see below).

Is the Sure Shut Deco stair gate safe?

This wood-and-metal gate is a little less robust than its completely metal counterparts. After a testing period in a heavy-traffic area, being opened or shut around 50 times a day, an adult was able to move it a couple of millimetres by shaking it.

Our tester found the bottom corner of the birch wood gate moved several centimetres out of alignment following weeks of heavy use in the ‘open both ways’ position. But we think it’s unlikely your toddler would be able to push the gate as hard as our tester did, and you can use the bottom lock to secure the gate completely if you’re concerned.

Despite those small concerns, on the whole, the Sure Shut Deco stair gate stays firm, and bears up incredibly well amid the slams and yells of family life. The same cannot be said for all the stair gates we tested: one broke after several weeks of similar pressures and had to be dismantled.

The bottom bar is a typical 3×2cm, so might pose a trip hazard in the first few days. But in all other ways, Lindam has gone out of its way to make this gate toddler-safe. An internal locking mechanism, covered hinges and no sharp edges mean you don’t have to worry about trapped fingers. There aren’t any dangerous gaps for little hands or feet.

How easy is the Sure Shut Deco stair gate to clean?

This good-looking gate should stay clean and smart without much maintenance, as the dark metal of the frame hides any smudges really well. The birch wood gate, of course, is more susceptible, but has been treated to be wipe-clean. At the end of the testing period, there were no visible fingerprints and the gate still looked brand new. In our stain-repelling tests, mud wiped off easily, and so did baby food; blackcurrant juice needed a scrub after it had dried on the wood, but didn’t leave a mark.

It’s not an easy task to remove the gate in order to vacuum – far too much effort for a Monday anyway – but vacuuming around it isn’t difficult.

Is the Sure Shut Deco good value for money?

At £50, this Lindam stair gate is considerably cheaper than gates positioned at the luxury end of the market, yet in looks we think it can hold its own with the best of them, even if it’s slightly less robust than some.

The Deco is exceptionally easy to assemble and use, and we think it will even add a touch of low-key elegance to your doorways – and whose doorways couldn’t do with some extra low-key elegance?

Available from Lindam’s website, Argos and Amazon. If ordered directly from Lindam, delivery is free.