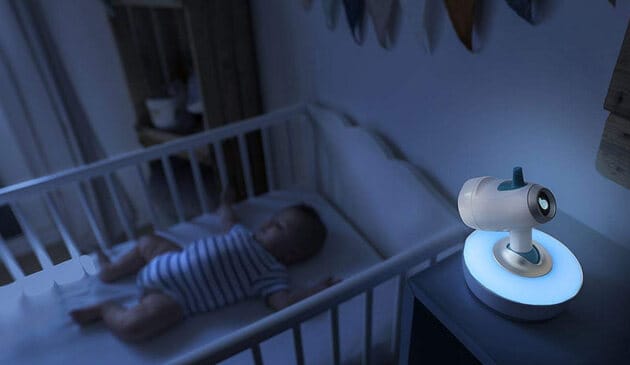 How easy is the Babymoov Yoo-Moov to set up?

Our parent testers, Rachel and Bobby, discovered that they needed to charge the Babymoov Yoo-Moov for a good three hours before first use. While this sounds like a lot, especially for parents eager to try out their new bit of baby kit for the very first time, this was, surprisingly, not as long as the required charge time for some of the other baby monitors we put to the test – Tommee Tippee Closer To Nature Video Sensor Baby Monitor, we're looking at you.

Once charged, they found the Yoo-Moov easy to set up, with the parent and baby units connecting at the push of a button. All it all, it took about 10 minutes to get going. This included time spent rummaging around the house trying to find two USB plug adaptors as these aren't included inside the box.

While this may sound unusual, Babymoov have said that this is part of their pledge to reduce plastic, assuming that most people will already have USB plugs knocking around at home. You may find this a good thing or just frustrating, depending on whether you have one to hand and if you're planning to charge the device via the mains – they are, however, available on the Babymoov website for £5.99.

Rachel and Bobby managed to set the monitor up without needing to consult the instructions, which consisted of black and white diagrams, basic step-by-step instructions and troubleshooting information. You'll be able to find these instructions online should you lose your paper copy and there is also a video on the Babymoov website showing the monitor in use – this may help you work out what to do, more so than the actual instructions, if you do get stuck. 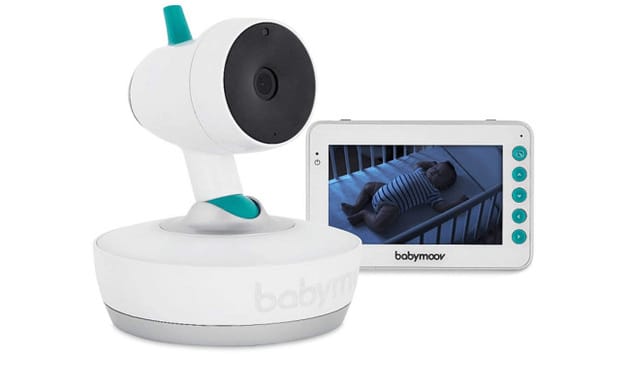 How good is the audio?

The Babymoov Yoo-Moov delivered excellent, interference-free sound quality at a sensible volume during testing. There are six different sound levels that you can change by going through the menu, however our testers noted that they would have preferred a dedicated volume button to make the sound easier to adjust, as on the BT Smart Baby Monitor.

The talk-back audio was also clear both ways, which meant that they were able to chat to their eight-month-old baby remotely and settle her successfully on several occasions without actually needing to go to her cot.

One thing the Babymoov Yoo-Moov monitor is missing, though, is a sound indicator, which may be off-putting for parents who think they would rely on visual alerts to be able to detect sound while watching a movie or listening to music with headphones on. If you’re hard of hearing, you may find a monitor with a visual sound indicator, such as the comparably-priced Summer Infant Baby Pixel baby monitor, more suitable for your needs.

That said, the Yoo-Moov does use voice-activated alerts (VOX), a technology that has two benefits: one is to alert parents if their baby makes a sound and the second is to help preserve battery life.

When your child is asleep, VOX in the Yoo-Moov will send the parent unit into sleep mode but keep the microphone active. This means that the monitor will then turn itself back on when it detects sound from your child, which can be very reassuring for parents who don't want to have to stand with their ears glued to the parent device.

There are three VOX sensitivity levels on the Yoo-Moov, which gives parents the choice to decide whether they want the monitor to come on if their baby makes a loud, moderate or slight noise.

How about the signal?

As with the other Babymoov monitor we tested, the Babymoov Premium Care (also a 2020 Mumsnet Best winner), Rachel and Bobby were impressed with the Yoo-Moov's signal strength which remained strong throughout the house and into the garden without seeming to be affected by either walls or ceilings.

This is good news as, while the Yoo-Moov does boast a 300-metre range in open spaces, Babymoov advise that you actually divide this number by three in order to gauge a realistic prediction. This basically means that you're looking at a range of about 100 metres if you're using the device in an average-sized two-storey family home.

If you do stray out of range, the out-of-range alarm will beep to let you know.

How long does the battery last?

Bobby timed how long the parent unit's battery took to run out of charge, and found that the Yoo-Moov lasted between six and seven hours.

It lasted longer than some of the other video baby monitors we tested, such as the Summer Infant Baby Pixel (which didn’t quite last five hours) and, for many babies, six to seven hours is probably enough to get you through the night.

Of course, you can use the VOX function to preserve some of the battery life (there is, unfortunately, no dedicated power-saving mode) or leave the parent unit plugged in at the mains overnight, but many parents will find the latter far from ideal.

When the battery is low and the parent unit needs recharging, the battery level indictor will flash red. Orange will indicate an empty battery. Once recharged, a green LED light will show.

Our testers liked the compact parent unit with its teal buttons and simple design. The large camera may not be to everyone's taste though, and Rachel and Bobby felt it didn't look particularly at home in their baby's nursery, especially when compared with other devices they tested, such as the more subtle BT Smart Baby Monitor.

That said, their baby wasn’t at all perturbed by its presence.

Rachel and Bobby liked the clear and responsive menu interface, but found the volume controls a little difficult to access and to navigate with the controls.

Of course, it’s the 360-degree camera that's the main draw though. Our testers found this very easy to move and control, and thought it would be simple for anyone to get the hang of, even those unfamiliar with using techy kit at home.

The silent, motorised technology with pan, zoom and tilt functionality worked as promised giving a 360-degree view of the cot without waking the baby up. The remote control function, with the parent unit used as the controller, was our tester, Bobby's, favourite feature as it was fun and easy to use. However, he felt that it wasn't really necessary day-to-day family life and, overall, would have preferred this monitor to have had a smaller camera.

Picture quality was strong close up, but became a little blurry when the parent unit was further away in range. The night vision mode was clear enough for our testers to see their daughter's face in the dark, but less sharp than on the Summer Infant Baby Pixel (Mumsnet's Best Video Baby Monitor 2020). Brightness levels can also be altered if necessary.

All in all, Rachel and Bobby enjoyed using the Yoo-Moov at home as the parent unit is compact and easy to carry around. Although the USB charging makes the monitor travel-friendly, the size of the camera makes it difficult to pack in a suitcase, along with all the other essentials needed for newborns and toddlers.

We were impressed by the Babymoov's range of extra features and felt it offered enough to justify the price. It includes five lullabies and a temperature indicator, which means that parents won't need to splash out on a separate nursery thermometer to make sure that their baby sleeps safely and soundly.

There are also multi-coloured changing nightlights that appear on the base of the camera. These rotate through seven different colours which Rachel and Bobby's baby enjoyed looking at and seemed to find relaxing. Their toddler, on the other hand, found these much more distracting than sleep-inducing.

For parents with more than one child, the Babymoov Yoo-Moov can be used with up to four cameras. We didn’t try out linking an extra camera to the parent unit as we weren't sent a sample, but it’s a handy feature if ever you need to monitor multiple rooms. 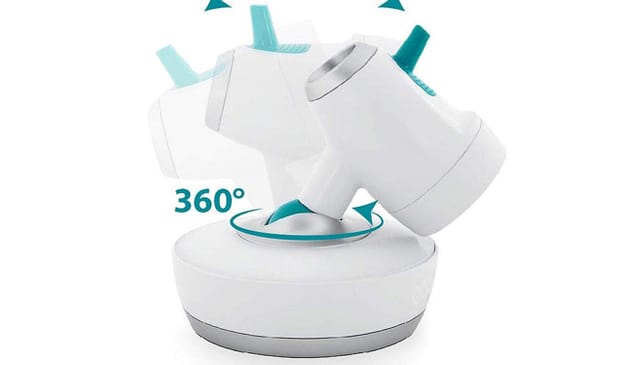 Is the baby monitor safe?

When it came to safety and stability, the Babymoov Yoo-Moov appeared a little flimsy at first, but ultimately performed well in our drop tests, even surviving being dropped down the stairs with only the battery cover popping off. It also has rounded edges, with no parts likely to break or cause any injury.

To keep it out of reach of curious fingers, a wall mount kit is included so that you can attach the baby unit to the wall. While our testers didn't screw this into the nursery wall to test, they noted that the screw attachment between the mount and the camera felt very secure.

Babymoov advise that parents place the camera on a flat surface between one and two-and-a-half metres from their baby's head. Both parent and baby unit also mustn't be exposed to drips or splashes for safety purposes.

As it’s made from plastic, the Yoo-Moov is fairly easy to clean. Our testers found the camera base (with its nooks and crannies to allow 360 movement) needed a little more attention, so lowered the overall cleaning score accordingly, but we felt that this wasn't something a once-over with a soft cloth couldn't fix.

Is the BabyMoov You-Moov good value for money?

While our testers found the monitor responsive and the 360-degree remote camera fun to control, they also noted that this type of feature may not be for everyone.

So if you're the type of person who loves a good gadget, then the Babymoov Yoo-Moov may well be a winner. If, however, you know you won't need remote control functionality or a rainbow of beautifully-coloured nightlights, you can definitely pick up a more basic, but equally sound, video monitor for less than £100.

We're sold, but then we do love a good piece of tech.

As well as being a decent video monitor with a stack of innovative features that you'd rightly expect for such a high price tag, we also found the audio and signal quality top-notch, which is why we awarded the Babymoov Yoo-Moov 'Best Baby Monitor for Gadget Lovers 2020'.

All Mumsnet product reviews are written by real parents after weeks of research and testing – this includes recommendations from the Mumsnet Talk boards. We work hard to provide honest and independent advice you can trust. Sometimes, we earn revenue through affiliate (click-to-buy) links in our articles. However, we never allow this to influence our coverage. Read our how we test page to find out more.

For more information about what to look for when buying a baby monitor, check out our buyer's guide.

Your baby at 12 months old