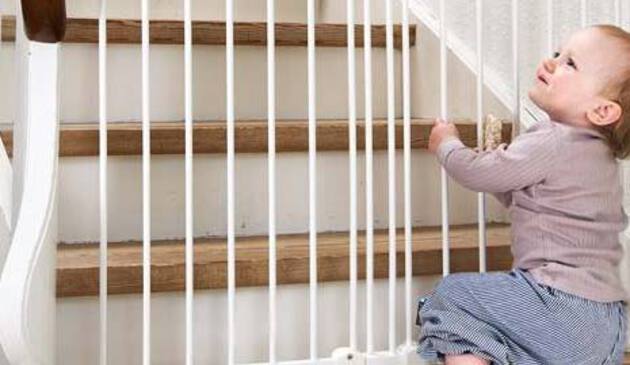 What features of the Baby Dan Flexi Fit stair gate are worth knowing about?

How big is the Baby Dan Flexi Fit stair gate?

The Baby Dan Flexi Fit is designed to work in as many spaces as possible: from the top and bottom of stairs, to extra-narrow and unusually wide doorways, the Flexi Fit even works on diagonal and uneven spaces.

The price for that astonishing flexibility is its assembly, which is more complicated than any of the other gates we tested.

Once up, though, the gate can be opened and closed with one hand by an adult and older child. The gate has been designed with child-proof quick-release mounting brackets, so it can be removed in a few seconds, and replaced just as easily. This is, arguably, more convenient than leaving the gate open for long periods because it takes up a lot of room.

The Baby Dan Flexi Fit is an excellent, budget-friendly stair gate that will fit almost anywhere, withstanding the bumps and slams of family life with ease. 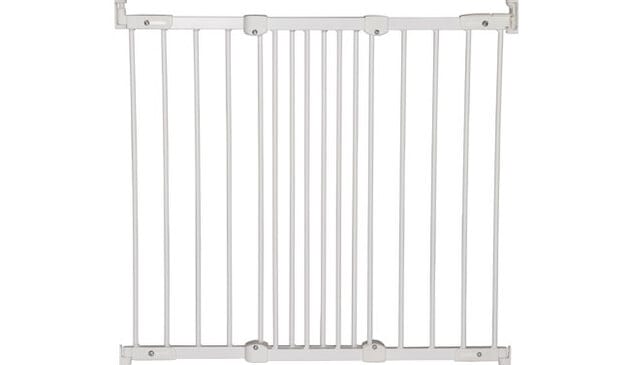 How easy is the Flexi Fit stair gate to assemble?

A safety gate that fits almost anywhere is like gold dust if you live in an older house. Unfortunately, you’ll pay for that magic in assembly time.

There are 45 small pieces in the Flexi Fit box – not including the gate itself, which isn’t assembled – and putting them all together, solely on Baby Dan’s enigmatic diagram-based instructions, is a job worth a panic-sweat or two. You’ll need a drill, a pencil and a lot of patience. (For the renters: installing this gate means six small screw holes on the walls.)

There are a couple of lifelines: a drill template is included to show you where to fix the wall mountings; and there’s also a video on the website that covers installation and will help with visualising where everything should go. Still, it took a seasoned flat-packer a good half an hour – and some bewildered staring between gate and diagram – before the Flexi Fit was ready to use. We advise tackling this task when you’re not too tired, if such a time exists.

How does the Flexi Fit stair gate work?

Assembly might be a headache but day-to-day usage is a breath of fresh air. In the multiverse of Baby Dan safety gates – so numerous as to be confusing – this one is the industrious all-rounder. The wall mountings are small, and designed to face in any direction, which means the gate can be fitted on the inside or outside of door frames, on a diagonal, or on banisters if they’ve got a flat plane at the top and bottom to screw the mountings in. No bottom bar and the secure screw fittings mean it’s a great choice for the top of the stairs. And in its narrowest position, the Flexi Fit is narrower than any other gate we tested, meaning it will suit a huge range of doorways.

Once in position, and especially when extended, the gate itself does feel slightly flimsy. It rattles a bit when shoved, moving a few millimetres in either direction. The open-and-close mechanism likewise feels just a little insubstantial, and the gate sometimes needs a small jiggle to seat itself into the lock properly.

To open it, you slide the button and lift the gate out of the lock. To close, move the gate back into position and lift into the lock. It’s straightforward enough, but the slide button is thin and sometimes hard to grip. No sweat for an adult, and little sweat for an older child (seven years plus, perhaps), but not really possible for a younger one of maybe four to six years.

Another word of warning – watch out for that turning circle if you have a wide door or stairways – it’s huge, so you need to make sure you have clearance to open it. With other gates we tested, the gate swung out from a fixed frame, so it was narrower in width and less obtrusive in use; with the Flexi Fit, a gate the entire width of your doorway will swing out. Our tester’s doorways were wider than average, and it wasn’t practical to keep the gate swung open – it simply took up too much room, so the gate had to remain shut when not in use.

On the plus side – and it really is a plus – the wall mountings are designed with a child-proof quick-release mechanism so you can take the gate off entirely in a few seconds. Without the gate, the mountings are surprisingly inconspicuous – a convenient touch that sets the Flexi Fit apart from its competitors.

The small, screw-fitted wall mountings of the Flexi Fit mean that, while the gate might rattle when pushed, it isn’t going anywhere. The gate stayed up and firmly in place throughout the whole testing period in a high-traffic area, being opened and closed between 40 and 50 times a day, and subject to more than one toddler tantrum.

The hinges are covered in smooth, rounded plastic, so it’s not possible to trap a finger (one of the requirements of Safety Directive EN 1930:2011), and there’s a gap of 4cm between gate and floor, which shouldn’t cause any issues.

Do keep an eye out for the bottom of the gate, which features an x-shaped plastic piece that locks into the mounting bracket, and is perfectly shaped to catch a foot as it swings around.

How easy is the Flexi Fit stair gate to clean?

Oddly, the Flexi Fit stair gate attracted the most dirt and smudgy fingerprints of all the gates tested, especially on the plastic fittings along the top, and the release button. The metal gate itself is wipe-clean. Blackcurrant juice and baby food were easily removed, and while mud seemed to sink into the joints of the plastic fittings, it came out, along with all the fingerprints, with the scouring end of a sponge.

That quick-release mechanism will be a boon when vacuuming, too: the gate can be removed in a few seconds, and replaced just as quickly, ending the not-insignificant irritation of toast crumbs living permanently in the crevices of your doorways.

Is the Flexi Fit stair gate good value for money?

While the £26.99 Flexi Fit doesn’t look or feel very high-end, and it’s a little clumsy in execution, we think the positives far outweigh the negatives. It’s the only gate in our testing group that fits in a huge variety of openings and is flexible enough to fit uneven doorways and most banisters. It can even be removed easily. All without any additional costs. It’s a hard-working every-gate that might just be what you’re looking for.

Available from various stockists including Amazon and Mothercare.

As well as testing for time of assembly, our tester installed all the gates in 'high traffic' areas of the house, so they’d be opened or closed at least 40 times a day. All Mumsnet product reviews are written by real parents after weeks of research and testing. We work hard to provide honest and independent advice you can trust. Sometimes, we earn revenue through affiliate (click-to-buy) links in our articles. However, we never allow this to influence our coverage.