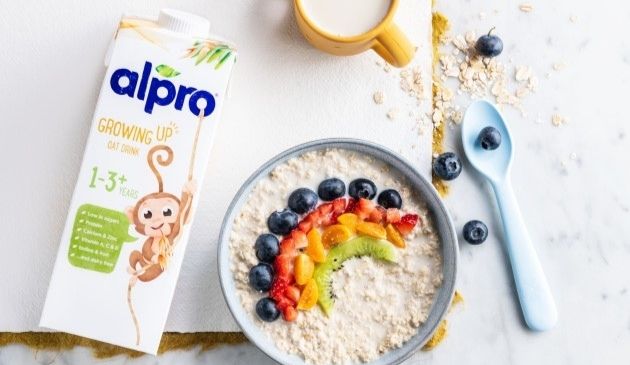 What is Alpro Oat Growing Up Drink?

Alpro’s new Oat Growing Up Drink is made specifically to support growing toddlers. It’s a  source of calcium, vitamin D and protein - all important  for growth and bone development - and fits a varied and balanced diet.

What is Alpro Soya Growing Up Drink?

Also a source of calcium, vitamin D and protein, the Alpro Soya Growing Up Drink is a great option for children who need an alternative to dairy milk, whether for dietary, ethical or medical reasons (such as a cow’s milk allergy).

Who are the Alpro Oat and Soya Growing Up Drinks for?

Related: How to encourage healthy eating in kids

What do Mumsnetters think about the Oat and Soya Growing Up Drinks?

"My two-and-a-half-year-old has CMPA. Our dietician recommended the Alpro Soya Growing Up Drink when she was one and we've stayed with it ever since. I'd thought about trying an oat alternative before, but never found one with the right level of calories, fat and minerals needed as a milk substitute for dairy-free children.

We tried the Alpro Oat Growing Up Drink on cereal first and I was very surprised that my fussy toddler didn't notice the difference from her normal soya. I then gave her some in a cup. The oat drink is less sweet and has a thinner texture than the soya so I was sure she'd refuse it, but she later asked for more!

I'm a big fan of both drinks because they're the only easily available dairy alternatives I've found that have enough calories and minerals for young children. My only criticism is that the soya version is quite sweet so I'll be looking to switch to the oat."

“The Alpro Soya Growing Up Drink has been my go-to for a number of years. Having two young children who are intolerant to dairy with different symptoms, I was over the moon to find a product that they loved the taste of and that I trusted.

It gives me peace of mind knowing that it’s 100 percent plant-based with nothing artificial, offers a quality source of protein (as well as containing vitamins) and provides my kids with enough calcium. We’ve used it for bedtime drinks and throughout the day, adding it to recipes and cereal each morning. The children absolutely love the sweet taste it offers, and I’ve always loved that it’s UHT so I can take it on my travels and know I have a good supply of a milk-alternative drink for them wherever I go.

Having tried several dairy-free alternatives in the past, we’ve always come back to this one as it has the nicest taste and tailors to the needs of my young children the best. It’s fantastic that there’s now an oat alternative too.”

Two children aged one and two

“I’m interested in my kids trying plant-based alternatives as my son suffered from reflux and wind/constipation when he was younger, which was likely due to dairy in my diet. He’s been exclusively breastfed and, now that he’s turned one, I’d like to reduce breastfeeding and move onto a dairy-free alternative to cow's milk. My daughter has never had any issues with dairy, but I’m interested to see what she thinks of the alternatives.

The oat drink tastes nutty and is thinner in consistency to cow’s milk. We tried it in their cereal which they both seemed to enjoy but, when I offered it to my youngest, he didn’t drink much. We persevered and, after the second day, he drank it all. We tried the soya drink on cereal and in porridge which went down well, but DS seemed to prefer the soya to oat. Taste-wise, it’s much closer to cow's milk and sweeter than the oat.

Overall, the soya was more popular with all of us. But I’d recommend both as they’re fortified with the necessary vitamins and they’re a sustainable alternative.” 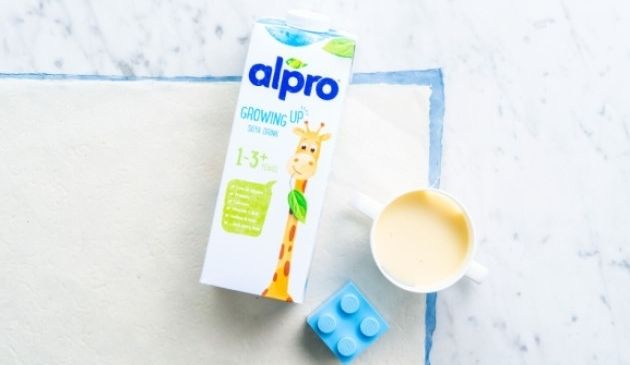 “As a family, we’ve made a conscious decision to reduce our dairy and meat intake. I eat a plant-based diet and my youngest is completely dairy-free. Rather than having several different cartons of milk and milk alternatives in the fridge, we now only use plant-based milks with our favourite being oat.

We tried both Alpro Growing Up Drinks as a standalone drink and in cereal. They taste sweeter than our usual brand of oat milk, but have almost half the sugar content and double the protein. Both drinks were a good consistency with the oat drink tasting slightly creamier, making it the more popular choice for drinking. The added vitamins and minerals give me reassurance that my children will be getting all the essentials needed for growth and development.

Overall, I was impressed with the Alpro Growing Up Drink range and my youngest enjoyed the taste, consistency and fun packaging. It would be great if it would also come in small cartons that could be served at preschool and in Reception alongside the dairy versions currently provided.”

“From around 18 months or so, DS stopped enjoying the taste of cow’s milk and now refuses to drink it. My husband also turned vegan in January 2019. We regularly buy shop branded unsweetened soya milk and semi-skimmed cow’s milk, but our child doesn’t like the taste of either so we’ve been looking to find a suitable replacement.

We offered the Alpro Oat Growing Up Drink on its own to DS and he drank it straight away! He enjoyed it even more so with some cocoa powder mixed in. The nutrients, flavour and lack of lactose make it easily superior to dairy.

While the soya drink had a lovely creamy texture and taste, and mixed in very well with our hot drinks, the overall taste was far too sweet. However, we added it to a family favourite vegan cake and thoroughly enjoyed it.

That said, we all much prefer the Alpro Oat Growing Up Drink so this is a product we will definitely look out for. It was a pleasure to see our child enjoy it, and it will make our mealtimes easier and less worrisome knowing that he’s getting the key nutrients and calories he needs to stay healthy and active."

Related: 16 things you should know as a first-time parent

Two children aged one and three

“The drinks both have the right level of sweetness. My children said that the oat flavour reminded them of popcorn and the soya tasted like custard, which were both positives. The soya milk alternative tastes most like cow’s milk and is creamier and mildly sweeter than the oat.

I would definitely recommend them to other parents, especially as many children are showing allergies to dairy. I’ve already purchased the Alpro Soya Growing Up Drink as this was their favourite. My children have a healthy well-balanced diet and I plan to switch completely to dairy-free in the near future. The fact that the Alpro drinks contain calcium, vitamin D and protein is very reassuring.”

What Alpro has to say

An intake of one to two portions per day fits in a varied diet. The Alpro Soya Growing Up Drink 1-3+ is specifically suitable for children where an alternative to a cow’s milk-based formula is needed or required for medical (such as a cow’s milk allergy), ethical or dietary reasons. A varied, balanced diet and a healthy lifestyle is recommended for good health.

Benefits of Alpro’s Soya and Oat Growing Up Drinks:

This isn't an exhaustive test. Rather, our First Look features are informed previews, providing a basic overview and getting a feel for a product’s most exciting aspects.

10 toys for imaginative play for toddlers and kids