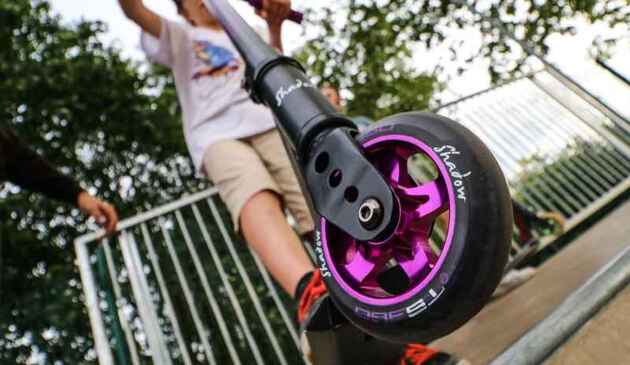 What is a stunt scooter?

A stunt scooter is a scooter that's primarily intended for tricks and grinds at a skate park. As such, it doesn’t fold, transform or adjust for height, and the materials tend to be chosen for durability and structural integrity.

What’s the TS360 Shadow Stunt Scooter like to purchase and assemble?

As a relatively new product, the TS360 doesn’t yet have a maintenance section with guides and spare parts, but this is on the way and will be in place before the end of the year.

In the meantime, there are maintenance guides in the instruction booklet (see below), and there is an easily available warranty form on the website in case something goes wrong with your model.

The oversized stunt handlebars mean an unusually shaped, triangular box that’s a little tricky to carry – but as the TS360 will be delivered, you wouldn’t need to carry it far. At its widest point, it measures 68cm (l) x 12cm (w) x 50cm (h). The recommended age range is clearly marked on the front, and there’s also the CE mark and the relevant EU safety law (EN:14619), which is good to know from the outset.

As structural integrity is paramount with a stunt scooter, there’s a small bit of assembly required and screws to tighten. The T-bar is secured to the baseboard via a clamp and screws, and the handlebars need to be straightened before use. 3StyleScooters provides an allen key to do this, and it wouldn’t take a novice more than 10 minutes to go from box to skate park.

As with 3StyleScooters’ other scooters, the instructions for the TS360 are exemplary – consciously designed to be friendly, helpful and easy to follow. The text is obviously aimed at the pre-teen/teenage audience so they can learn to look after the scooter themselves – a prompt towards independence appreciated by Rachel, our parent tester.

Safety warnings, maintenance guides, and text and diagram instructions to assemble and adjust are all present and correct. There’s also a page listing the scooter’s maximum weight and recommended height to make sure your child can use it safely. 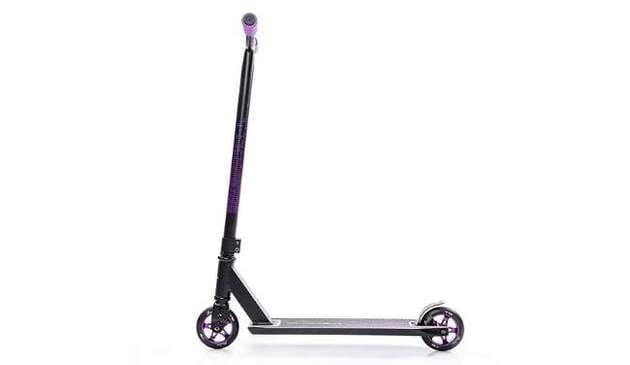 How safe is the 3Style TS360 Shadow Stunt Scooter?

As the box confirms, this scooter meets the requirements of European safety law EN:14619, which is the relevant law for this model. It applies to kick scooters classified for sport, and built for users weighing between 20kg and 100kg.

For all stunt scooters, the quality and longevity of materials used is vital, so information about the TS360 is easy to find. It’s comprised of an aluminium baseboard and steel forks, steel rear brake, aluminium-core polyurethane wheels, and rubber hand grips. There are all intended to help with stunts and tricks: steel forks to take the impact of landing, polyurethane wheels to stand up to jumps and heavy use, and aluminium baseboard to handle grinding and other impacts without fracturing.

In person, the TS360 feels like a highly-engineered model, with no shoddy or cheap finishings, and with every component solid and durable.

What about the handlebars?

The handlebars are extra-wide, at 52cm with 14cm per hand, which is great for stability in motion. But the T-bar height can’t be adjusted as that’s not a requirement for this kind of scooter. On our tester’s nine-year-old son, the T-bar reached mid-rib height, which is a little high for some stunts, but the positioning felt about right for the lower end of the age range.

The hand grips are made from a dense rubber – comfortable to hold, with hard end pieces to take the impact of falls to the side. During our tip test (and during the week-long testing period), they received some scuffs but weren’t damaged.

Likewise, the aluminium baseboard showed some scratches after being dropped by our tester’s son multiple times a day, but these were only cosmetic and didn’t affect performance. The weight distribution as a whole feels centrally balanced, and it’s hard to tip over to the front without deliberate effort.

The brake fender is made from a thin piece of sprung steel, which doesn’t have the heavy-footed effectiveness of the brakes on younger scooter models, but instead allows for careful braking by degrees, which is more appropriate for stunts. During the brake test, the scooter took 105cm to come to a complete stop.

The baseboard is 11cm wide, so stable enough to stand on, and is covered in a sandpaper-type material for good grip. The ground clearance is high – 6cm – which is good for stunts, but also means you’re unlikely to get the scooter caught on anything while in motion. 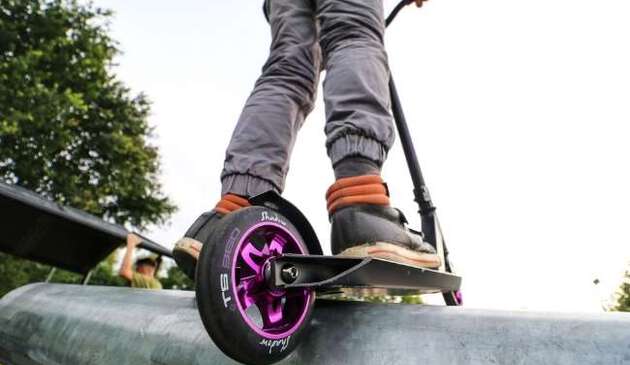 The definition of ‘day-to-day use’ for a stunt scooter is a little different than for a general-use scooter. We’re not assessing its suitability for trips to and from school, but its durability, weight and momentum in a skate park.

As a metal-framed two-wheeler, the TS360 does take more skill and stability to kick off and go, but since the intended audience is older, this shouldn’t be a problem. Our tester’s nine-year-old – not particularly adept at stunt scooting when he began – could control it well and gather speed quickly.

Because of the metal frame and small, hard wheels, there’s some rattle when in motion. But, in general, the frame feels very solid. The extra-soft, grippy rubber of the handlebars is comfortable to hold tightly over time, which helps with stability – and of course would also help with stunts and tricks.

How heavy is the TS360 Shadow Stunt Scooter?

Altogether, the scooter weighs 3.8kg, which isn't much heavier than the younger RGS-1 and -2. The lightweight frame means the TS360 is easy to learn small tricks on as a beginner, but it also has enough extra weight to give it momentum when it’s moving. Our tester’s nine-year-old came into the testing period as a complete novice, and within a week had learned two small tricks.

Stunt scooters like the TS360 don’t fold, and it also doesn’t have a kickstand, which would get in the way when performing grinds or tricks. This might be ideal for the skate park, but is a little inconvenient everywhere else.

During testing, the TS360 was frequently dropped and left on its side. However, storing it isn’t a problem. Even though the handlebars are wide, it’s easy enough to twist them to the side so that the standing footprint is only 67cm x 11cm – not difficult to slot into a small space.

Is the TS360 Shadow Stunt Scooter easy to clean?

The colour scheme means that dirt isn’t obvious, though the non-slip covering on the baseboard does get scuffed quickly in a way that would be hard to remove without scrubbing. There aren’t many places for mud to get trapped, so a quick spray-down makes the TS360 look almost new again after use.

Over time, the end pieces covering the handlebars discoloured slightly from their original purple. Whether this was from sunlight or hitting the floor we’re not sure, but the deterioration was only cosmetic.

What is the TS360 Shadow Stunt Scooter like to look at?

This model gives an immediate impression of careful, durable engineering, with high-end finishings and an attention to detail. There’s only one colourway available – black and purple – which does feel like a choice that wouldn’t appeal to everyone. Our tester’s nine-year-old enjoyed using it, but wasn’t particularly in love with the design.

Is the TS360 Shadow Stunt Scooter good value for money?

At £69.99, the TS360 isn’t a casual purchase, and it’s new enough that there aren’t any available secondhand. But the huge maximum weight (100kg) and solid design means your older child could use it all throughout their teen years and beyond, if they wanted – and it would likely be safe and usable for all of that decade.

While we hope that 3StyleScooters will expand their parts and maintenance section to include this scooter, even without that safety net we think the TS360 would go the distance. And £69.99 is a price point where a teenager could feasibly save up for it themselves, which suits the intended audience to the ground. 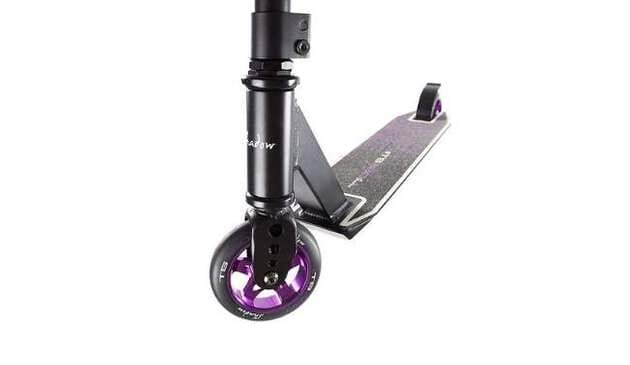 For an older child or teenager wanting to get into stunt scooting, you want a model that will be safe, lightweight and easy to manoeuvre, and capable of standing up to a great deal of battering. The TS360 Shadow Stunt Scooter does all of this effortlessly, at a price that’s considerably cheaper than many of its competitors. We reckon it’s the ideal first scooter for your budding stunt enthusiast.

All prices correct at time of publication.

We've searched high and low for the best prices. If you find a better price elsewhere for the 3StyleScooters TS360 Shadow Stunt Scooter, then please let us know.