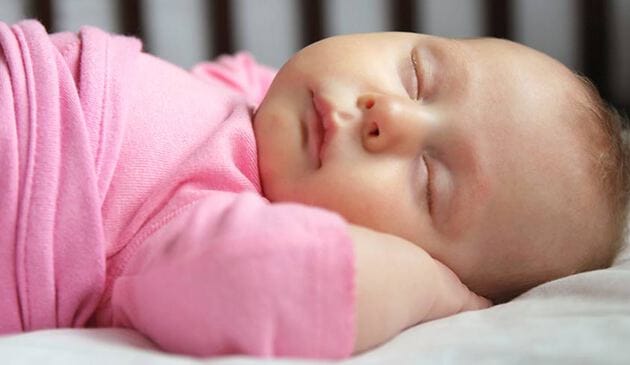 What is a baby's routine at five weeks old?

Until now she's really been too young for any semblance of order but by around five weeks you might want to think about heading towards some kind of routine – more for your sanity than your baby's benefit. She's ready for a bit of structure now though, as she's able to stay awake for slightly longer periods of time, so it might actually be worth your while trying to bring a bit of order to the chaos.

Start by introducing a nap-time and bedtime routine. It might be as simple as getting out a specific blanket for her to lie on and singing a familiar song. Eventually, she will start to associate those things with getting ready to settle down to sleep. If you have more time on your hands you can try a more elaborate sleep routine, maybe a relaxing bath, a play on the towel, clean nappy and bedtime Babygro on, then a story in her room and a feed.

You could invest in a toy for her room that plays a tune she will start to associate with going in her cot, or a light show toy that displays pictures on the ceiling for her to look at while she's drifting off to sleep. Don't expect any of this to immediately send her off to the land of nod; the idea is that you're creating familiarity so by the time you've done the same thing several hundred evenings in a row she'll know what's coming next and compliantly fall asleep. (Well, you can dream, even if your baby's showing no signs of doing so.) You can use the same techniques for daytime naps, too.

How much does a five-week-old baby feed?

At five weeks you should still be feeding on demand and following your baby’s cues, whether you’re breastfeeding or bottle feeding. As a rough guide, they still need around 150ml to 200ml of milk per kilo that they weigh each day (so if your baby weighs four kilos aim for between 600ml and 800ml a day), but be guided by your baby. Obviously, if you're breastfeeding you won't be able to measure it anyway so as long as she seems happy and is giving you lots of wet nappies, you've no need to worry.

She's gaining somewhere between 140g and 200g a week at this age – probably nearer the top end of this scale if she's going through a growth spurt.

How much sleep does a five-week-old baby need?

At five weeks it's possible your baby may be awake for up to nine hours of every 24 still, but sadly not all of the sleep she has will be at night time. You're probably starting to recognise the signs that she's tired now, such as blinking a lot, rubbing her fists in her eyes or tugging on her ears. When she starts to show signs of tiredness, try and get her down for a nap before she goes completely 'over' and gets to the howling stage.

If you're finding she wakes in the night and isn't hungry for a feed, you need to drop a few hints that it's time to go back to sleep. When she wakes in the night, try to be as boring as possible to ensure she isn't mentally stimulated and help get her back to sleep. With five broken weeks of sleep behind you, you're probably not giving Melvyn Bragg a run for his money in the scintillating conversation stakes anyway, but keep your voice low and monotonous and the room dark. This should give your baby the message that there's nothing going on to interest her at this time of night. If you look too thrilled to see her or go around throwing lights on, she'll get the idea that it might be time to play.

The good news is that naps are becoming more distinct and may even become predictable soon, giving you a little more time to yourself to paint your nails or read a book, or… let's be realistic – put another six loads of washing on and try to drink that cold cup of tea from four hours ago.

Your five-week-old baby can now focus both eyes on an object together and, this week, may start tracking a moving object with both eyes. Her muscles continue to develop, meaning she will be able to use her neck a bit more to turn and look at things, following the sound of a noise or a moving object.

Is there a growth spurt at five weeks?

Yes, it's common for babies to have a growth spurt at between four and six weeks so you may well be in the thick of it now. A growth spurt can be almost as exhausting for you as it is for your baby so get as much rest as you can and try to ensure you eat well.

Your milk supply will quickly catch up to your baby’s demands, so don't worry that you won't have enough milk. In fact, you're more likely to have the opposite problem and find that once the growth spurt is over, you have too much milk. If you find you have an oversupply you can always express it and freeze it for a time when – oh happy day – you actually get to leave the house for a few hours on your own!

Five weeks marks the first of the 'mental leaps' that some baby experts call 'wonder weeks'. They refer to the fact that the week is pretty wonderful in terms of your baby's development (rather than to the fact that by the end of the week you'll wonder how you got through it at all).

A wonder week is really simply your baby 'sorting out' and processing all the things she has learned in the last few weeks. This first 'wonder week' is all about the development of sensation and memory. This week your baby starts to recognise smells. Though she's known your voice since before birth she's now able to remember your smell and recognise it when she's near you. You'll also notice her using all of her senses more from this week, responding more obviously to touch, looking at things really closely and reacting immediately to noises.

Your baby is much more alert at five weeks old. Now is a good time to start some really short 'play sessions'. A few minutes of play either after a feed or on waking from her nap will give her day a bit of structure and hopefully tire her out for a decent sleep at night, too.

Play at this stage should be really simple. A few songs or rhymes – you could even put a nursery rhymes CD on if you feel a bit self-conscious singing along on your own – or just put her on a mat and pull some faces, up close to her face so that she can really focus on your expressions. Even a walk around the garden, chatting and showing her some of the sights and sounds, will entertain her for a while.

Toys that feature black-and-white patterns are easy for her to focus on and anything that makes a noise will draw her attention. She won't yet be able to shake a rattle or anything but she may make efforts to touch or grasp it and will love hearing you make her toys come alive with shakes and toots for her. Baby-safe mirrors will continue to fascinate her, as will cloth books that feature big pictures of faces for her to look at.

Keep playtimes to five or 10 minutes still at this stage. If she gets upset, it could be that she's overstimulated (all too easy at this age) so if she doesn't seem up for it, put the toys away and give her some quiet time or a feed or nap.

At five weeks your baby will start to enjoy music and other noises and is also able to respond to smells, something to remember when you're changing a particularly violent nappy; she may well find it just as nose-wrinkling now as you do.

Her neck muscles are now strong enough that she may be able to hold her head up properly now – probably only for a short time but it's exciting nonetheless.

Your life with a five-week-old baby

You might be thinking about getting back to exercise and perhaps even reclaiming your old jeans once more. It's probably best to wait until after your postnatal check-up next week to start donning Lycra and wielding kettlebells, but there is one very important exercise you need to start doing now (if you haven't already) and that's your pelvic floors. Pregnancy and birth can leave your pelvic floor (the muscles at the base of your spine) a little, ahem… relaxed. And that can mean you leak urine when laughing or sneezing – and sometimes just when standing there minding your own business. Pelvic floor exercises will help get those muscles back in shape. To tense your pelvic floor muscles, imagine you're doing a wee and need to stop mid flow. The muscles you'd use to hold a wee in are the ones you need to clench. Try clenching them and imagining you're pulling something 'upwards' with them and then hold for a count of 10. Don't worry if you feel like nothing's happening at first, with practice you'll get there and eventually have a pelvic floor like a trampoline… and maybe one day you'll even be able to go on a trampoline again without fear of embarrassment. Something to look forward to.

"I used to put a warm hot water bottle in his Moses basket while I was changing and feeding him and then take it out a couple of minutes before putting him back in the basket."

"We found that our DS settled better in a warm bed. I used one of those microwave teddies to warm up his spot before putting him down, not too hot but just warm enough that he felt as though he was still being cuddled."

"I just talked to my DS at five weeks and smiled at him when he was awake, but he couldn't even take much of that before tiring his little brain out."

"Give them a tickle and you might get a smile. DD2 would give a lovely smile if I very gently traced around her lips with my finger."

"My son is nearly five weeks old and all he seems to do is eat, sleep, cry when hungry, wave his limbs around, fart, make other amusing noises, pee, and poo. I just talk nonsense at him, laugh at the farts, and try to enjoy it as everyone tells me he'll be an angry teenager before I know it."

Read next: Your baby at 6 weeks old.

How much weight should my baby gain in the first year?