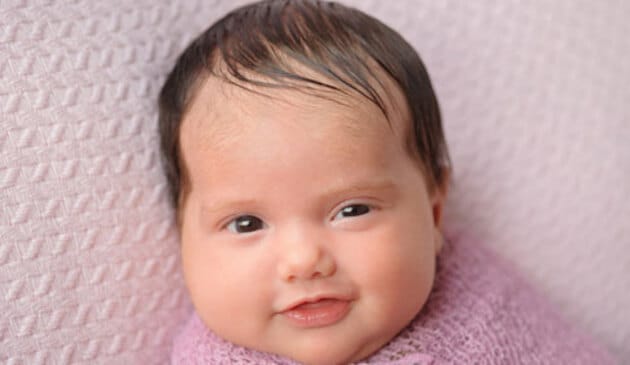 What is a good routine for a six-week-old baby?

This is the point at which a routine actually starts to feel like a vague possibility rather than a hilarious and cruel joke. Having said that, all babies – and their mothers – are different. Some parents have their child on a military timetable at two weeks (do try to smile politely when they tell you this rather than cackle uproariously) and others are happy to go with the flow for another six weeks yet. There's no right answer. Do whatever makes you happy.

How much sleep does a six-week-old baby need?

At six weeks your baby is still sleeping for a good chunk of the day but is slowly moving towards a more settled sleeping and waking pattern.

If you want to try nudging things along a little you can make a start on a routine, by waking your baby at the same time each morning. It might be that 7am actually coincides with her second nap of the day but no matter.

When you put her down for her first 'scheduled' nap, do your regular nap routine – a song and a cuddle, her comforter or a familiar blanket, whatever is normal for you.

Many parents find that around this time, naps get suddenly very short and their baby falls into a sleep-wake cycle of about 20 minutes. If you find she's waking far too early from her nap, try calmly settling her back down to sleep again. It's very likely she does need more and if you can persuade her to go back down you'll both feel much less ratty for it later.

How often does a six-week-old baby feed?

Once she's over that week six to week eight growth spurt you may find her feeding routine is a bit less frenetic than it has been until now. You'll probably still feed on demand but you'll be noticing a stronger pattern developing and both her feeds and the gaps between them becoming longer. Hallelujah!

How many nappy changes a day for a six-week-old baby?

How long is a piece of string? (Don't answer that.) Anywhere between one and 10 poos a day is pretty normal. If you notice sudden changes it might be worth having a word with your health visitor. You'd hope to see at least six wet nappies a day, too. Again, during a growth spurt, the number of nappies is likely to go up in line with an increase in feeding, but things will settle down again once the growth spurt is over.

By six weeks your baby is much stronger and more steady than she was at birth. Instead of lolling from side to side, her neck is more controlled and she can even hold her head steady for a few seconds. Hold her up on your chest and shoulder and she may briefly bob around like a meerkat, admiring the view.

She's still gaining 140-200g a week and growing about an inch a month, which is a lot when you consider how small she started out!

Her hands are still closed most of the time, and if you tickle the palm of her hand she will grab your finger – this is known as the grasp reflex.

Babies tend to develop from the head down, in that the head and upper body become strong before the lower body and legs, but you may notice this week that she starts to kick her legs in the bath – already beginning to exercise those muscles ready for walking.

Around now, or at some point between now and eight weeks, you may well notice your baby has a bit of a growth spurt, so now might be the time to go out and buy a few clothes in the next size up. Her newborn outfits may be stretching at the seams a little by now.

How much can a six-week-old baby see?

High-contrast and brightly coloured objects are the easiest things for your baby to see right now. However, it is likely that she can distinguish your face from the faces of other women.

You can help your baby's eyesight develop by taking her to places where there's lots to look at and the opportunity to stretch her eyes a bit. Now's a great time for some nice walks or a trip to an art gallery where she can stare at all the different colours on the walls.

It's the big one – this is the week when you may first see your baby smile. Don't worry if it doesn't happen yet. Many babies don't crack a smile until around 12 weeks. Maybe she just doesn't like your jokes. Babies can be a tough audience.

If you spot your baby looking up at the ceiling or towards the horizon a lot, that's her learning about the shape of the world. Babies are constantly scanning the world for edges and corners at this age as it helps their brains build up a visual idea of the world around them.

While your baby is making her first sounds, talk back. You'll find a slow, sing-song voice comes naturally to you when you chat to her. Language experts call this 'motherese' – you're naturally programmed to speak this way to your baby so that she can learn as much about language as possible. Put your face close to hers so that she can see the way your mouth moves and your expression changes.

Toys that clip onto her cot or buggy are a good idea now – she'll start to notice them when she wakes from a nap and eventually reach out towards them.

Finally, encourage muscle development by helping her to kick and splash in the bath – put a little floating toy near her toes and help her gently kick it. She'll be delighted when she realises she can splash you (and everything within a 12-foot radius). If she seems to enjoy it you could even look into baby swimming lessons now.

Bear in mind that at about six weeks, babies can get really easily overstimulated so if she's crying more than usual, firstly, that's pretty normal, but secondly, you might want to scale back on the visitors that want to play peek-a-boo with her, or older cousins or siblings thrusting brightly coloured teddies under her nose. That's enough to make anyone cry eventually, isn't it?

The big one this week is smiling. It makes such a difference to your frame of mind after a night of broken sleep when you go in to your baby and are greeted with a gummy smile. Lots of parents worry about how they will know if it's a 'real' smile or just wind. The difference is that a real smile will spread across her whole face and you'll really see it in her eyes. But you'll 'just know', we promise.

As well as smiling, she might start trying out other facial expressions so look out for her looking surprised now and then or grimacing when she encounters something she isn't keen on. She's copying your every move now, so big, exaggerated facial expressions on your part will help her develop these new skills, too.

Her hearing is fully developed but by week six her memory has also developed enough that she'll remember the sound of your voice and will look up in recognition as you start talking.

She also has another newfound talent this week – if you take her hands in a lying down position and gently pull her towards you in a sitting position she will hold her head steady.

Your life with a six-week-old baby

The postnatal check-up is not just for your baby, it's for you, too. You may have your stitches checked, blood pressure taken and the doctor will have a feel of your belly to see if the uterus has contracted. Contraception may also be mentioned. Even if the thought of having sex still seems like a very vague and distant plan, it's worth having a think about. You'll soon have forgotten that's what got you into all this trouble in the first place and might just be considering doing the whole baby thing again in a few months. Yes, really!

Remember that although you're quite unlikely to get pregnant again if you are exclusively breastfeeding, it's by no means a reliable method of contraception.

If you had a caesarean, this might be the appointment at which you are given the green light to start driving again and do some gentle exercise.

"I would say that if the crying goes on for longer than a few minutes and if it sounds like 'crying' rather than 'low-level grizzly noise', pick her up and see if she needs winding."

"I feed or rock her to sleep and let her fall into a deep sleep which takes around 20 minutes before putting her down and this worked well."

"I would not restrict day sleep. That way madness lies with a 6-week-old."

"Keep reminding yourself that it won't always be like this (and it's true, it won't) and try to stay chilled and calm – babies are so good at picking up on moods and if you're stressed and twitchy, they will be too."