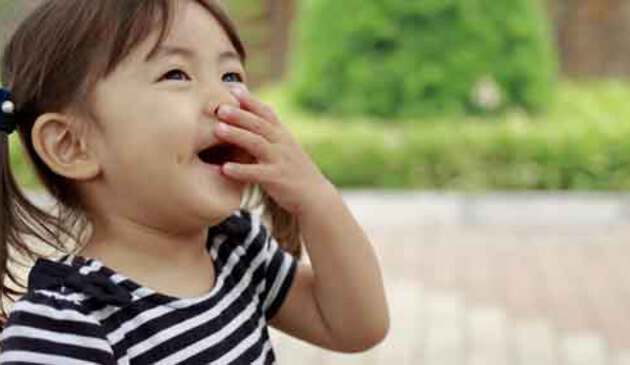 On an average day, she will probably still have a nap of around two hours (though some children drop theirs at this stage) and she'll sleep around 11 hours at night. That's what the text books reckon, anyway. If you're experiencing toddler sleep problems, perhaps your two-year-old didn't get the memo.

She'll probably be quite chatty by now, and will have plenty of her own opinions, which she'll want to share with you. Loudly. And repeatedly. (And if they're about poo, bottoms or personal comments about any part of your body, this will probably happen in the queue at Tesco's).

Her newfound physical skills enable her to start becoming independent. She might be able to take off her own clothes – and even put some on, too, and should be able to wash her hands, standing at a step stool to the sink, and dry them again with help.

By two years of age both boys and girls are on average around 34 inches tall and weigh around 27-28lb.

She's much more physically confident now and will be running around the place, with very few falls. She can probably go up stairs one at a time using alternate feet and holding onto the bannister, rather than leading with only one foot and bringing the other one up to join it. She may well also be able to use a scooter or a trike, and whizz round the garden on it. This is the time when you look around in the park and realise she's halfway up the climbing frame above your head, and you had no idea she could reach the bottom rung.

Her fine motor skills are coming along nicely, too. She's showing new affinity for dealing with small objects, picking up tiny things with a masterful pincer grip, stacking lots of blocks together to make a tower, and starting to make distinctive marks with crayons and pencils, though she probably won't yet have a preference for using her left or right hand. As the year goes on she'll become even more adept at these skills.

How can I encourage my two-year-old’s physical development?

Two-year-olds need lots of opportunity for physical activity so try and get them outside every day, to the park or just for a good walk or a scooter ride.

To encourage fine motor skills, at this stage the most useful thing is to get her to do things that will strengthen her hands and wrists, ready for writing. Play Doh, and other squishy substances are great for exercising her fingers. To strengthen her wrists, try giving her a whisk in the bath to whisk up big piles of bubbles.

Your two-year-old has a real understanding of the world now – not just of things like physical cause and effect but of concepts that are much harder to grasp, such as how someone might be feeling and how her actions can impact upon others.

She's also starting to develop 'real' friendships. They won't mean much yet, but she may start to show interest in particular children or even inform you that a certain child at nursery is 'my fren, Mummy' (aaawww!).

She can sort objects by category now, which might be cars from animals, small things from big things, or things of different colours, and she may even be able to name some colours accurately.

Concentration improves enormously, and you may begin to find it harder to drag her away from a game she is heavily involved in. Gone are the days when a toy would amuse her for just a few seconds. Now you might find you have to offer all sorts of bribes to get her to leave the house when she's engaged in the important business of building a farm or banging cars into the skirting boards.

What should I do about a two-year-old biter?

In spite of her new understanding of others' feelings, she's definitely got a way to go, so if she suddenly enters a phase of biting or pushing (hardly any parent escapes this completely) take a deep breath and remember this is pretty normal. Get down to her level, explain that little Tarquin is crying because you bit him and biting hurts, and give comfort to the other child. Whatever you do, don't be tempted to bite her back, no matter how gently. All that tells her is that really biting can't be too bad.

Will my toddler be jealous of a new baby?

If you insensitively choose this time to have another baby, she may be completely furious and insist it go back to the hospital straight away. Jealousy of a sibling is normal for a child who is suddenly displaced as top banana.

Do not expect her to do anything but hate the new baby and you may be pleasantly surprised. Having said that, do not leave them alone in a room together because your two-year-old's natural inclination is to torture her rival.

She is not evil or mean-spirited, she's a poor little two-year-old whose heart is momentarily broken. Make a fuss of her, downplay the baby and leave cooing until after your two year old's in bed.

Bedtime may become a battle of wills because she has enough sense now to object to being shunted off to bed to sleep while everyone else is having a fine old time downstairs. This battle lasts until adulthood, so be prepared to sit this one out!

How good should my two-year-old's speech be?

At the age of two, children are expected to know in the region of 50 words (don't worry, no one's expecting you to keep a list). That might sound like a lot when 90% of what she says is either 'no', 'why' or 'juice', but if you stop and think about it, she probably knows the names of lots of people, animals, foods, and all the inbetweeny words – me, for, to, up – that you take a bit for granted. She's probably able to put together two or three words to form a sentence now, such as 'me want juice' or 'go to bed' (you can but dream) and is even able to hold a short conversation with you of around three sentences.

This is the age at which vocabulary and other speech skills become more measurable so it's the time at which certain issues, such as speech delay, might be picked up on and diagnosed. Certainly, if you've any concerns it's worth asking your health visitor or GP. A common problem that causes speech delay is an ear infection or other issue that affects hearing, and those things are often quickly solved so it's certainly worth getting them checked out.

What's not worth worrying about just yet is pronunciation, so if she still says 'w' for 'r' and talks about 'disonaurs' and 'deddy bears', you can relax and just marvel at her cuteness for a bit longer.

Children of this age play happily alongside each other but also are able to share a play space (and occasionally even share a toy!). Sharing doesn't come naturally quite yet, and they don't tend to grasp it fully until the age of five, so if you spot it make sure you lavish her with praise. And if you spot her snatching and growling instead, rest assured that's pretty normal. She's only just developing a real sense of having personal belongings of her own, so it's natural she's slightly possessive of something she perceives to be 'hers'. Learning letters and numbers are still a little way off yet, but she may start to recognise a two for her age or the first letter of her name.

What toys are good at two years old?

A scooter, trike or balance bike is a great second birthday present, which she can use as she grows to improve balance, gross motor skills and strength.

Activities that develop fine motor skills are also good for this stage – things like Play Doh, clay or chunky beads you can pick up with tweezers or thread onto string.

Role play toys, which she can play at 'in parallel' with a friend, such as a cars mat, dolls' house or play kitchen are good, too.

By the age of two, your child will probably be doing some of the following:

What else happens when my child is two years old?

There are a couple of 'progress reviews' which happen around this time, designed to reassure you that your child is on track and identify any potential problems early.

Between two and two-and-a-half years your child will be invited to a two-year health check by your health visitor. You'll be sent an SQ3 questionnaire to fill in beforehand. Here are some of things that will be discussed at the appointment:

At some point when your child is two, her nursery keyworker, childminder or playgroup worker will complete an EYFS progress check to share with you. This is basically a report on how she's getting on and takes the form of a short, written summary of her abilities in key areas, highlighting her achievements and areas for improvement.

When can we start potty training?

Potty training tends to happen at some point between 18 months and three years of age. When you start depends on when your child is ready really. These are a few of the signs to look out for:

If you think now is the right time to get started, begin by investing in a potty that will hopefully pique her interest (perhaps with a favourite TV character on) and is nice and comfortable (to encourage her to stay on it. Leave it somewhere visible and maybe encourage her to sit on it before her bath each evening and see if she can manage a wee. Clap like you're watching Mo Farah in the 5,000 metres if she does produce one.

Once she's familiar with the potty and happy to use it you can really go for it. Most Mumsnetters agree that the best way is cold turkey. Just put the nappies away, clear a couple of days in the diary to stay at home and crack it – and have the Dettol to hand. If she's ready to potty train she should crack it within a few days. If not, just give it a break for a while and try again in a couple of months.

"If you have a naughty toddler, remember to pick your battles. Otherwise you'll be exhausted".

"When it comes to table manners, we tell ours not to throw food or cutlery, and no smearing food all over the table. This didn’t stop him from dipping a forkful of sausage pasta into his juice before eating it earlier. And then he drank the juice".

"Please go easy on yourself. I think at two years old, they understand a sanction for about five seconds but, like goldfish, forget it immediately afterwards. Just have faith in that it eventually starts to take effect".

"As for stopping them from being naughty, I find that distraction is the best technique – followed by removing the item he's being naughty with".