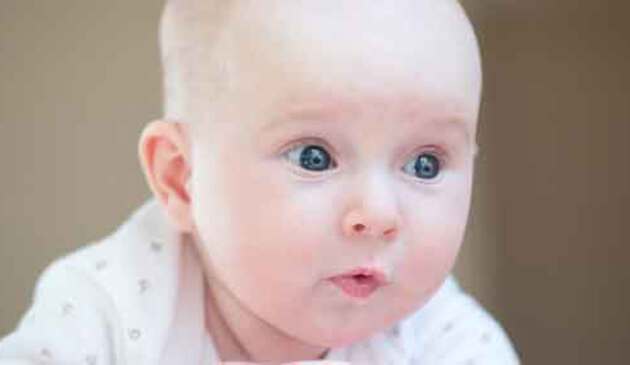 You're probably feeling more at home in your new life, too, and have hopefully conquered feeding and are beginning to get into a routine, whether you’re breastfeeding or bottle feeding.

Your baby will be having around six feeds a day now, so you might have hit that magic four-hourly schedule, where everything suddenly falls into place and you don’t feel as though you are chasing your tail all day in a whirl of feeds, changes and naps. On the day you manage to get breakfast tidied up before lunchtime, you'll know you've cracked it.

Your baby has been growing and developing at an amazing pace since she was born. Her muscles are much stronger and she's now able to hold her head up straight for short periods of time. She might even hold her head at a 90-degree angle from her body when she is lying on her tummy.

As well as being generally more active, your two-month-old's movements are much smoother and less jerky than they were previously and she's looking more controlled. She's able to grasp things with quite some might – watch out for your hair! However, she isn't yet able to let things go again, so you will find yourself gently prising her fingers away from the object she is clutching.

What can my baby see at two months old?

By now she can see around double the distance she could at birth – about 60cm away from her face. She's also able to process more complicated patterns and shapes than before and the differences between colours are becoming clearer to her. She will prefer bold patterns and bright, primary colours to more subtle patterns and muted shades.

How much can my baby hear at two months old?

Her hearing has been good since birth but she's now able to differentiate between various familiar voices and should react when she hears a loud noise.

How can I encourage my two-month-old's physical development?

She will enjoy reaching out to bat things with her hands or kick them with her feet so try dangling a toy in front of her to encourage her to do this. Mobiles are also good for this age as she's still practising tracking moving objects with her eyes.

The big news at two months is that this is the time when your baby starts to smile for real. No more wondering if it was wind or just a funny face. When you first see a 'real' smile there's no mistaking it for anything else.

A few grins go a long way, too. Until now, let's be honest, motherhood has been a fairly thankless round of nappy changes, feeds and comforting her when crying. It's lovely when you start to get something back in return.

Her gross motor skills are coming along nicely as well and now, when she kicks her legs and waves her arms, she's able to do it with much more poise and purpose.

How can I encourage my two-month-old's brain development?

Talking to your baby is ever so important. You might feel silly keeping up a running commentary on everything you do but her brain is taking all of this in, helping her build the foundations for language.

When you chat to her, try to give her spaces in which to 'answer' you, so she can learn about the pattern of conversation.

At two months old she'll enjoy listening to songs and rhymes, so you might want to buy a CD of nursery rhymes and sing along with them.

Tummy time is still important and she'll use time spent on her tummy to practise holding her head up straight and exercising the muscles she will soon be using to roll over.

What toys are good for a two-month-old?

A baby gym provides a safe and interesting spot for your two-month-old to practise for her first roll. Tummy time on the mat will encourage her to lift her head and she'll also enjoy lying on her back, batting and kicking the toys dangling from above.

At around two months your baby will probably do the following:

At the same time she may also do some of the following:

What else happens when my baby is two months old?

There are quite a few appointments and check-ups on the horizon. You still need to take your baby along to a clinic to check on her weight gain at least once a month, and track it in the charts at the back of her red book.

But there are also a couple more appointments that will give you the chance to ask about any other health or developmental concerns you may have.

Your baby's first vaccinations – what to expect

At around eight weeks, your baby will be invited to have her first round of vaccinations.

These first jabs are for:

You'll usually be asked to sit your baby on your lap and hold her very still while the nurse puts the vaccines in her thighs. It's natural to feel apprehensive about your baby's first jabs. The nurse should be able to answer any questions or concerns you may have.

Some babies have a minor reaction to the vaccines, such as a mild temperature, but generally this is shortlived and nothing to worry about.

If your baby has a fever before the vaccines or is otherwise unwell you may be asked to postpone them until she is better.

Your baby's six- to eight-week check – what to expect

Around the six-week mark, you and your baby will both have a check-up with your GP. At this appointment the GP will carry out the following checks:

She will also probably ask about her feeding and sleeping routine.

This appointment is as much for you as your baby though, so you may have your stitches checked and be asked how you're feeling. It's a chance for you to bring up any concerns you have about either your health or your baby's, and a chance to talk about your wellbeing and mental health as well as any physical concerns.

Could my baby be teething at two months?

It's possible – some babies are actually born with teeth! However, it's unlikely just yet. If you notice your baby is dribbling a lot it is more likely that it's simply her saliva glands, which are developing at this time and can go slightly into overdrive.

My two-month-old has a cold – what can I do to help?

The good news is that once your baby is two months of age a cold is a bit less of a worry Before this stage you're advised to call your GP if your newborn gets a cold as they can very easily develop into something more serious at this age.

By two months, however, things are a bit less of a concern… AND < fanfare > you can crack open the Calpol now if your baby has a temperature! It's a life-changing moment as you begin a long relationship with the pink gelatinous stuff.

If your baby is blocked up, try sitting with her in the bathroom with a hot shower running – the steam can help open their airways and unblock a stuffy nose. You can also try raising the head end of her cot so that she is sleeping at a slight angle. Saline drops (available from pharmacies) are also good at unblocking stuffy noses. And if you're really committed to the cause, you can buy a 'snot sucker', which is a tube with a bulb at one end that goes just inside your baby's nose and a mouthpiece for you to suck on at the other end to empty your baby of mucus. Fear not – there's a heavy duty mesh piece in between to prevent the contents of her nose being sucked straight into your mouth!

Try to get her nose as clear as you can right before a feed, as it's quite hard for your baby to feed effectively when she can't breathe through her nose.

"Some babies are criers. The only things that worked for my baby were: a baby swing and her thumb (when she found it). There's no easy answer – but it will get better, it's only a matter of time".

"Sometimes they can get into a very bad overtired cycle where they can't sleep well because they're too tired – sounds mad, I know".

"The rule of thumb that works quite well is: babies of this age are ready for bed a maximum of two hours after they last woke".