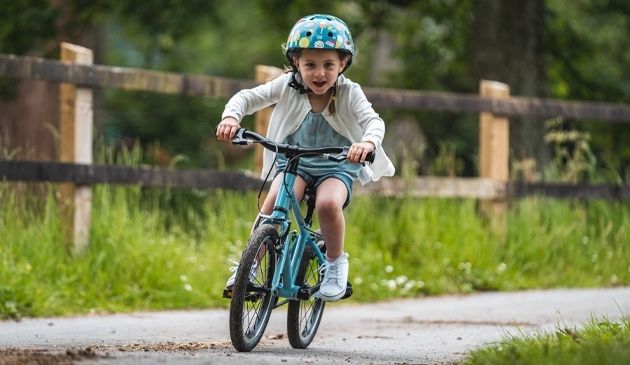 Tested by Tammy, mum of one eager little cyclist

Teaching your child to balance and ride a pedal bike for the first time can be daunting, but it doesn’t have to be, as the right bicycle can make all the difference to your little one’s first cycling experience.

A first pedal bike should be sturdy and solid, yet light enough to manoeuvre, and feel safe and comfortable to help your child gain confidence.

So does the Hornit HERO live up to its ‘superpower’ status? Our First Look reviewer and mum of one put it to the test.

Designed for an inside leg measurement of 40.5cm to 50.5cm ( or 34cm to 44cm for the 14” pedal bike), the HERO 16” is the perfect size for the average four- to five-year-old. Our reviewer’s six-year-old could comfortably ride the 16” during testing, but would likely outgrow it within a few months.

If you’re keen to get your three-year-old started on a pedal bike, the 14” is the optimum size to go for.

Related: The best scooters for kids 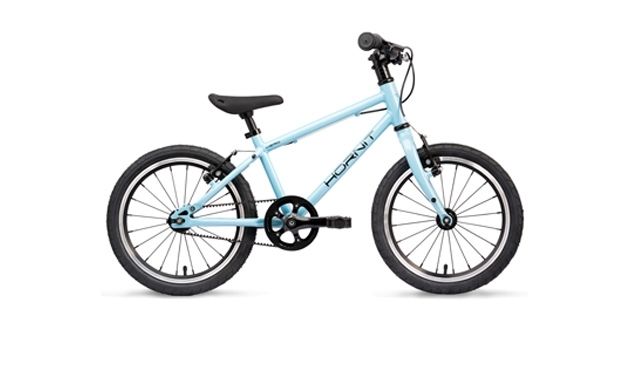 Out of the box, it’s immediately clear that the HERO 16” is no ordinary pedal bike. Its sleek design and lightweight aluminium frame in bold metallic red (known as Snapper Red) makes a remarkable case for minimalism and functionality.

From the compact saddle to the hybrid tyres, innovative belt drive, nifty pedals and progressive frame, it’s evident that the weight, comfort and safety of this bike are top priorities.

The weight of a first pedal bike is important. The lighter the bike, the more comfortable your child will feel on it and the easier it’ll be to transition from a balance bike, gain confidence in tackling corners and manage undulating terrain. After comparing the weight of the HERO against the Saracen Mantra 1.6 Bike - a kids’ bike within the same category, which weighs 6.4kg (excluding pedals) - the HERO won hands down.

The Hornit HERO comes in a compact box with cut-out handles making it easy to lift and transport. When it comes to assembly, the bike is relatively simple to put together, even for a newbie who knows little about bicycles. This is thanks to the comprehensive instruction booklet with plenty of infographics, plus an easy-to-follow video tutorial (you’ll find a link to the video on the box itself).

The bike is packaged well enough to protect it from dents and scratches, yet it’s quick and effortless to unpack and remove the protective elements by hand, so you don’t run the risk of scratching the bike with a sharp knife or scissors.

Assembly took roughly 20 minutes, including a quick tyre pump. However, as it specifies in the instruction booklet, the bike doesn’t come with the necessary tools needed for assembly which include a screwdriver, an allen key and a monkey wrench or pedal spanner for the pedals, so you’ll need to have those handy. A small critique is that the pedals need to be installed with a spanner which can leave tool marks (rather than an allen key), which is a bit of a shame given the beauty of this bike.

Additionally, the bike isn’t made with quick-release skewers on the wheels. So, in the event of a puncture, you’ll need to keep tools on-hand.

The front and back wheel fitted easily and there was no brake rub on the back or front thanks to a pre-delivery check and tune by Hornit’s mechanics. In combination with a quality rear hub, this means that the back wheel spins freely for ages, which translates to less energy lost when pedalling.

The handlebars are also straightforward to put on, albeit without a marking or line indicator which makes the bar alignment a bit of an art.

On assembly, you may find that the pedal ground clearance is smaller than on other bikes. While it’s not a major issue, this could be a little unforgiving if your child happens to keep the inside pedal down around a corner or fails to keep the pedals level.

One of the best features of the HERO is its weight. At just 5.7kg (5.4kg for the HERO 14”), it’s one of the lightest bikes out there, a feature too often overlooked with children’s bikes. If you consider that the average four-year old weighs 18kg, a bike weighing 8 to 10kg is often too cumbersome to ride – and, surprisingly, this is the average weight of children’s pedal bikes currently on the market. Learning to ride on a sleeker, lighter bike is a fast-track way to gain confidence and skills. 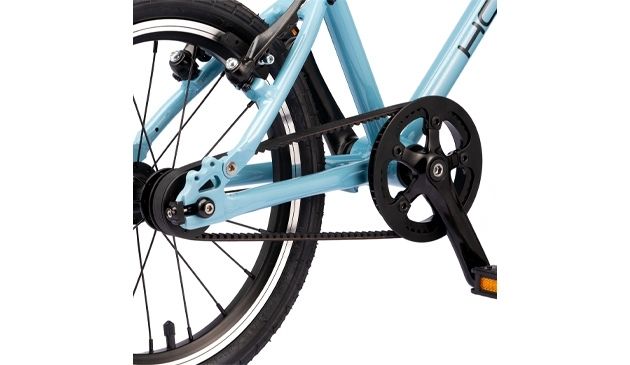 We loved the HERO’s premium gates belt drive system, which is rust-proof and clean without having to be treated with oil or grease. This makes it easier to maintain in the long run, and safe for small hands and fingers.

When it comes to comfort, the saddle is arguably one of the most important components and, in this case, it doesn’t disappoint. The padded layer on the HERO saddle takes care of vibrations, while the well-proportioned design ensures optimum comfort while pedalling. A saddle that’s too wide can cause chafing due to the thighs rubbing against the sides of the seat. This saddle is lightweight and easy to adjust so that feet remain flat on the ground to reduce the risk of falling.

The streamlined aluminium frame makes the HERO 16” feel less intimidating compared to chunkier models. Our mini tester rode the bike with ease and even managed to lift it onto the pavement herself.

Our reviewer said the HERO frame was as close to perfection as she’d ever seen in a child’s bike and, as an avid cyclist herself, this is high praise indeed.

The HERO’s hybrid tyres are ideal for a child’s bike as they’re versatile enough for any terrain, yet not as bulky or heavy as mountain bike tyres. An impressive, additional touch is the solid aluminium rims which add to the stylish feel and quality of the bike. 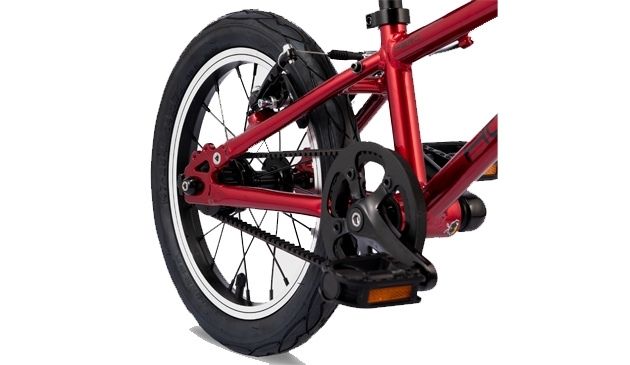 Another fantastic feature of the HERO is it’s longer cranks, which are ideal for little legs as it allows for a larger turning circle. Long cracks also mean less force required on the pedals. This makes for a more efficient, comfortable ride on undulating or flat terrain.

Related: The best kids’ slides for indoors and outdoors 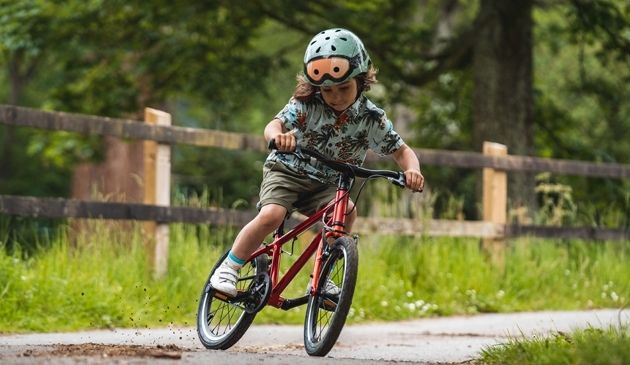 Retailing at around £369, there’s no doubt that the Hornit HERO is a premium children’s bike, but you get the quality that you pay for. There are very few first pedal bikes on the market with such high-quality aluminium frames. Hornit has also taken great care to ensure that every component on the bike is lightweight, comfortable and the right fit for a child with the aim to make cycling a rewarding, enjoyable experience rather than something your child has to do to stay fit.

This bike has also been made to last and is a great hand-me-down choice for younger siblings, so we feel it’s a great investment. The HERO 14” is slightly cheaper at £349.

The HERO also comes with an initial three-year warranty on the frame and forks and, as an original purchaser, you’re bumped up to a lifetime warranty upon registering your details on the Hornit website.

Overall, this is a brilliant little bike with an extra edge. It’s super lightweight and in no way intimidating for children learning to ride a pedal bike for the first time thanks to its sleek design and functional components.

Our reviewer’s daughter really enjoyed riding the bike around the block and managed corners and downhills well –  the well-proportioned handlebars and easy-to-reach brake levers make it simple to slow down.

Do be aware of sizing if your child is at the higher end of the inside-leg measurement range - it may mean that the bike won’t last them as long.

We give all new products a thorough once-over, checking that the features are as good as they say and that the product functions as it's supposed to. This isn't an exhaustive test of the product or how well it performs – look to our Mumsnet Best winners for extensive testing in real life situations. Rather, our First Look features are informed previews, providing a basic overview and getting a feel for the product’s most exciting features.

All prices correct at time of review