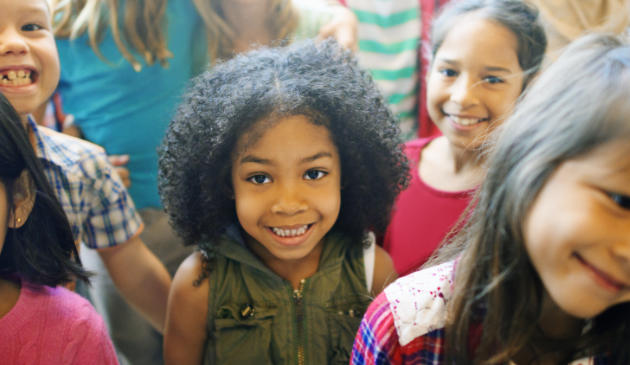 The campaign aims to curb the premature sexualisation of children by asking retailers to commit not to sell products which play upon, emphasise or exploit their sexuality. Earlier this year, the campaign was extended to tackle lads' mags, calling on newsagents and supermarkets not to display them in children's sight.

We’re very pleased that the key 'asks' of our Let Girls be Girls and Lads' mags campaign have been endorsed by the government's Bailey Review into the sexualisation and commercialisation of childhood. The report proposes tighter controls on sexualised products aimed at children, and calls for magazines which feature sexualised imagery not to be displayed where children can easily see them.  It shows just what can be achieved when we get together to change things that seem, on the surface, to be 'just the way things are'.

Why Let Girls Be Girls?

It's no secret that the worlds of entertainment and celebrity encourage girls to believe their sexual attractiveness is paramount - and many Mumsnetters were alarmed that this trend was becoming increasingly visible in products marketed at young children.

They felt that a growing number of toys, clothes ('sexy' slogans on young girls' clothing, high heels for five-year-olds) and accessories (Playboy-branded stationery sets? Good grief) seemed designed to encourage children to enter the world of adult sexuality when they should still be - well, children.

Justine's statement:  "This is not about prudishness or hankering after some rose-tinted picture of childhood. It's about millions of parents - and many who aren't parents - knowing in their bones that there is something wrong with a society that tries to sell seven year old girls 4 inch heels, or t shirts emblazoned with "future porn star". "As parents we're told - often by our own kids - that we've just got to live with it, that the world has changed. But we don't have to - and our Let Girls be Girls campaign, the Bailey review and the new retail code of conduct show the power ordinary people can wield when they speak out forcefully on forums like Mumsnet against the pornification of our culture."

"Little girls are being groomed into passively accepting their place as objects in our increasingly pornified culture, and it stinks." TenaciousG

"Kids should be allowed to be kids, not be forced into mini adulthood when they're far too young physically and emotionally."  Fords

"I am tired of looking for shoes for DD and seeing them in her size with massive great heels on them. She's five!" Mamazon

Like many others, we're worried about the long-term impact of this trend

You don't have to be a feminist to believe that little girls shouldn't be told that a vital quality to cultivate is that of being attractive to boys. Nor do you have to be Mary Whitehouse to believe that it's not great for girls – or boys – to grow up thinking that being feminine is all about a pornography-inspired pastiche of female sexuality. The trend towards premature sexualisation:

This aim of this campaign is not to police the developing sexuality of children, or to deny that such a thing exists. Mumsnetters, on the whole, aren’t interested in protecting a misty ideal of “childhood innocence” – in fact, they’re pretty keen on being as honest as possible about sex. But many argue that it’s difficult for children to learn about sexuality – and to decide for themselves how they’d like to express it  –  when they are bombarded with an all-pervasive ‘commodified’ version of female sexuality. This campaign aims, not to remove children’s control over their sexuality, but to give it back.  And clearly, sexualisation doesn’t only affect children: many Mumsnetters feel that women too are, to varying degrees, affected by the sexual culture we live in. What can be done? The truth is, we don’t know. But we thought that our collective ‘consumer heft’ could be a good place to start, so we worked to influence the products that were being sold to our daughters, in the hope that the next generation of women will be better able to choose who they want to be.

Of course, the premature sexualisation of children is not driven only by retail and marketing. Music, TV, pop promos, newspapers and lad's mags are all in the dock – but turning back the tide of pop culture felt like a big ask, even for Mumsnetters. We did think, though, that we could let retailers know how we felt about this development - so, in February 2010, we wrote to them, asking them to do their bit to help reverse this trend. We were absolutely delighted that so many high-street names agreed to take the lead on this very important issue. Plenty of retailers, including Boden, Startright, House of Fraser, Mothercare and Asda signed up to 'Let Girls Be Girls' almost immediately, and other big names – John Lewis, Tesco, M&S, Bhs, Boots, Zara, and Next among others - followed close behind.

Now, as the government publishes its Review of the Sexualisation and Commercialisation of Children, the British Retailers Consortium has launched a new set of stricter 'best practice' guidelines to ensure that responsible retailers meet parents' concerns.

What we asked retailers to do

Those retailers who have signed up to Let Girls Be Girls have agreed 'not to sell products which exploit, emphasise or play upon 'children's sexuality' We mentioned a few examples of inappropriate products in our letter to retailers - children's underwear which mimics adult lingerie, 'grown up' heels for little girls, 'sexy' or provocative slogans on clothing - but we deliberately didn't provide a definitive list of inappropriate products. We want to encourage retailers to become self-policing, and we feel they're more likely to do so without a list to 'tick'. We're also wary of appearing tacitly to endorse an item, simply because it's not yet been drawn to our attention.

"Mumsnet has been loud, clear and effective in its Let Girls Be Girls campaign." Education secretary Michael Gove

However, this is a learning process for all of us; it's possible that some retailers might slip up - so please do let us know if you see products which concern you. In this situation, we'll first ask Mumsnetters what they think, and if there is a broad consensus that the product in question does sexualise children, we will raise the issue with the retailer in question, and work with them to resolve the problem. If an acceptable solution can't ultimately be found, the retailer's accreditation could be removed.

Let Girls Be Girls is a rolling campaign: new products are hitting the shops all the time, and there are still plenty of retailers who haven't yet signed up.

Mumsnetters are generally a very sensible bunch; we know that people have different ideas about what does, and what doesn't, sexualise children. We're also well aware that not all pre-teen clothing is to everyone's taste - but that taste is a different matter to sexualisation. To give an example, there is no consensus on Mumsnet about whether bikinis or crop tops fall into the 'sexualising' category.  For similar reasons, the campaign focuses on the pre-teen market - beyond that age there is much less consensus over what is appropriate.

If in doubt, retailers are welcome to get in touch with MNHQ to discuss consulting Mumsnetters about their product ranges.

What about parental responsibility?

Of course we're not suggesting that retailers should shoulder all the responsibility for turning back the tide. We understand that parents  have the option of not buying products which sexualise children, and that a small minority of parents might actively wish to dress their eight-year-olds like mini-adults, teetering in heels and a provocatively-sloganed top. But we believe few parents make an active choice to do so - we know from experience that most parents are low on energy, and struggle to resist 'pester power' at the best of times. Holding the line against a furious nine-year-old can sometimes seem like a battle not worth fighting, and the more widely available these products are, the more acceptable – even inevitable- they are perceived to be.

But working together, we think we can make a difference – and ultimately, we believe that the retailers who have signed up to the campaign will benefit from the support of the vast majority of parents who want products which 'Let Girls Be Girls'.

The effects of premature sexualisation on girls

Authorities as varied as the NSPCC, the NUT and then Archbishop of Canterbury Rowan Williams are concerned that this generation is being sexualised before they reach their teens, with, according to the experts, disastrous implications for their self-worth.

Here are some of the books and articles we've come across which deal with the subject, either specifically or tangentially. It's by no means exhaustive - so if you know of any others please do post on the campaigns thread and we'll add it to this list.

More about the Bailey Review

The Review makes further recommendations about the exposure of children to sexualised imagery.  It proposes that explicit ads, music videos and TV programmes - described as a "wallpaper of sexual images that surround children" - should be subject to tighter control, with age-ratings on music videos, and stricter enforcement of the television watershed. It recommends that outdoor advertising featuring sexual imagery should not be displayed in areas near schools or playgrounds, and that parents should have a one-stop portal to enable them to complain about products, ads or services more easily. The review also proposes that internet users should have to make "an active choice over whether they allow adult content or not".

Any thoughts on how we can maximise the impact of this campaign? Please add your support, comments, ideas or extra research to this campaign thread.