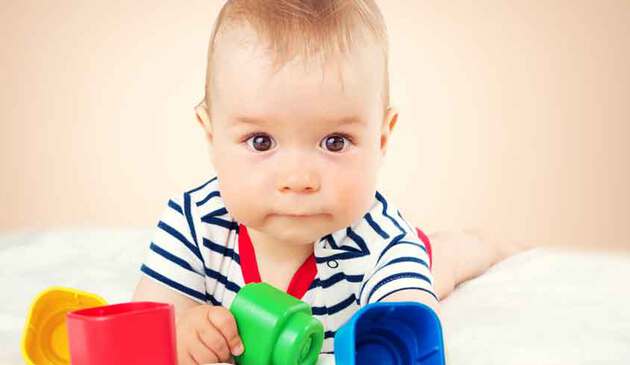 She has mastered sitting, managing up to 10 minutes without cushions to prop her up now and can also reach forward and grasp things without collapsing face forward onto the floor. She may be able to take her weight on her legs and cling on to the furniture. Some babies can 'cruise' around, shuffling while holding onto furniture or your hands. And now, when she wants to sit back down again, she's learning to bend her knees so she can slowly move from standing to sitting, rather than crashing down onto her bottom from a great height.

Don't worry at all if your baby doesn't crawl. Some babies bottom shuffle instead, which may run in families and also has the benefit of looking hilarious. Most babies who do this miss out crawling altogether and just go on to walking.

She's more dextrous by the day and around this time may move on from clasping her hands in front of her chest to clapping them. This is a nice party trick for relatives and more predictably successful than 'bye bye' (there's often a time delay here which means she'll manage to wave just after they've driven off, resulting in floods of tears). Her ability to transfer objects between her hands is now good and she will use a palmar grip – the palm of her hand and her fingers closing over something – which is a more advanced technique than the simple grasp. In the strive towards manual sophistication, she will also move his thumb to oppose her fingers. This means she can now pick up peas and small bits of bread to eat (or throw on the floor). She may also start to hold a crayon but is more likely to simply chew on it and spit it out.

These new physical skills mean she's now able to play in a more interactive way. She may be able to make a first brick tower: two blocks which will wobble alarmingly but fill your heart with pride. And if you gently throw a ball to her (and we do mean GENTLY – lob a football at her and she'll probably just cry), she may gather it up in her arms, which in our book counts as a catch.

Sight and hearing at nine months

Her sight is gradually approaching that of an adult's and she can now focus on very small objects and take in the detail in them. She can also now accurately locate sound. At seven months, ringing a bell above her head would just make her confused. Now, she will lift up her head to locate the noise.

How can I encourage my nine-month-old's physical development?

You can help her towards her next big milestone of walking by kneeling on the floor with her, holding both her hands, and letting her walk towards you. Rolling a ball gently towards her will continue to help the development of her hand-eye coordination, as she learns to 'catch'.

If you fancy yourself as a psychologist, you can experiment on your baby by trying the three-brick test. Sit her down and hand her two bricks, so that she holds one in each hand. If you hold out another brick to her (aim for the middle), she may stare at it with bewilderment (this does not measure intelligence, OK?), look from hand to hand, look at the new brick and then back to the bricks she holds but not try to take the third brick. Or she may drop one brick and take the third. Or she may try to cradle all three bricks between chest and hands.

However she responds, she is very clever because she's doing what's called 'adaptive development'. The ability to reach out and take a brick is instinctive but here, your baby, at the tender age of nine months, is beginning the intellectual process of working out what to do with that stupid third brick. Some of us are still working on this in our thirties. If you're one of those, don't have more than two children.

By nine months she's becoming quite collaborative, and as well as holding all those bricks, she might hand something to you. Until now she would simply hold it out and sit there wondering what she has to do to let the wretched thing go. Do wait until she actually offers you something though, as she'll get quite irate about having things snatched away. All this is the beginning of learning about taking turns. Try to embrace it because you're about to spend the next four years patiently explaining the concept again and again.

Your tiny deviant now understands the meaning of 'No!', but she also enjoys going back to the banned activity and watching you out of the corner of her eye to see what you think. It's hard to get on your discipline high horse at this age – easier to have a bit of a laugh with her.

She has a specific emotional attachment to her mum at nine months, and will treat you by sticking her fingers into your mouth as a sign of affection and pressing her face against yours. Try to look pleased about this. She may also get anxious if you look different, and if you're wearing a hat or a particularly outrageous item of clothing she may freak out at hearing your familiar voice emanating from this strange body.

By nine months she might manage an animal noise if you have roared/clucked/quacked to her consistently enough and some children of this age manage a 'mama' or 'dada'. She may even get the right person when she says it.

She understands more than even an overachieving parent might expect and certainly more than she can speak. The sight of a bib means food and she will flap her hands excitedly whilst 'bye bye' means you are leaving and she will pucker up ready to cry. If you say ''Daddy is home'' or ''Where's Teddy?'', she will understand, even though she's a long way off replying. She understands much more from the tone of voice you use than from the actual words spoken too. Although she isn't yet saying proper words really, she will chatter away with lots of consonants in imitation of your speech.

How can I encourage my nine-month-old's brain development?

First words can be encouraged by keeping up a general chit-chat to your baby as you both go about your daily business, so point out things you see as you push her in her pushchair and tell her what you're doing as you're serving her lunch. It's all going into her brain and being stored there for later use. Research shows that babies who are regularly sung to learn to talk earlier than others, so try that, too. Just the odd run through of 'Heads, Shoulders, Knees and Toes' will do fine. You don't need to deliver operatic arias about cutting up carrot batons or anything.

If your baby has a dummy, try to only give it to her for naps or if she really needs comforting from now, as if she has it in her mouth all day it will begin to restrict her ability to babble. Baby groups start to really come into their own now as your child becomes more sociable and begins to take more notice of her fellow babies, and even interact with them. 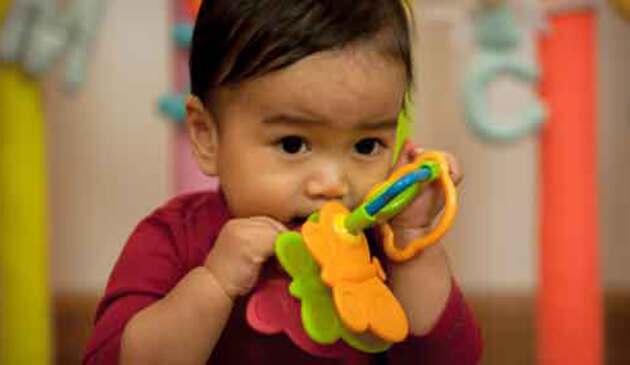 You can introduce turn-taking with simple games like you knocking down a tower of bricks, and then saying 'your turn' and waiting for her to do the same.

Finger-painting will be popular, so brace yourself and get out the splash mats (or better still wait for a nice day and do it in the garden). Professional early years educators refer to this as 'mark-making'. We call it 'mess-making' but there's no denying it's good for her motor skills and she'll be ever so pleased with herself when she sees her works of art.

She will enjoy trying to stack things and put things into containers, although this doesn't necessarily mean she will be the next Zaha Hadid. Give her a box or basket and a few smaller toys and she'll be happily engaged for some time with taking them all out and putting them all in again.

What toys are good for a nine-month-old?

Problem-solving type toys are great for this age – the rings you stack onto a stick are ideal, or sets of stacking beakers that both make a tower and also fit inside each other are a good investment. Toys with bits that move are also fascinating for nine-month-olds. Some chunky cars with wheels that go round and doors that open and shut are a good buy, too.

In terms of 'reading' matter, she will enjoy lift-the-flap books (also known as 'rip-the-flap books', as you'll soon discover) and pictures of real-life things, such as other babies and dogs and cats.

Read next: We round up the best toys for babies aged 6-12 months

By the time your baby is nine months old she will probably be doing most of the following:

What else happens when my baby is nine months old?

By this age, your baby's schedule is starting to reflect that of your own a bit more. She probably sleeps for 10-12 hours at night time and has one or two naps (morning and afternoon) of an hour or two each.

She's likely to be on three square meals a day now, with a snack in the morning and afternoon, as well as her usual milk feeds morning and evening, and probably still one mid-afternoon.

What foods should a nine-month-old have?

Now she's teetering towards mobility, she'll need to fuel all that extra movement so you can start introducing some 'proper' food now and may be able to eat the same meals as your baby (just hold the salt and make sure hers is cut or mushed enough for her. Things like shepherd's pie, fish pie and veggie sauce with pasta (she can have hers with tiny pasta shapes if she has trouble with grown-up pasta) are all good, and she might get into carbs like rice and couscous, too.

When do I need to buy my baby's first shoes?

Not just yet. There are all kinds of 'cruiser' shoes and soft leather slippers on the market should you want to throw your money at them but shoes are not necessary until he is walking alone and spending more time outdoors. In fact, letting her go barefoot is better for her development as her feet are unrestricted and walking barefoot strengthens the foot arches and leg muscles.

"They all develop at different rates and master skills at different times. Plus there’s a huge developmental leap between nine and ten months."

"Mine is wary of strangers and of being left, which is completely normal at this stage. It also shows a secure attachment to mum."

"Ours had to fit in with what we were doing – meaning the school run, going to the shops, going for walks, meeting friends, going to the park, and playing with pots and pans on the floor while I cooked."

"Over-tiredness is a big cause of night-time waking, so if this is a problem I'd suggest addressing their daytime sleep."

Your baby at seven months old

Your baby at eight months old