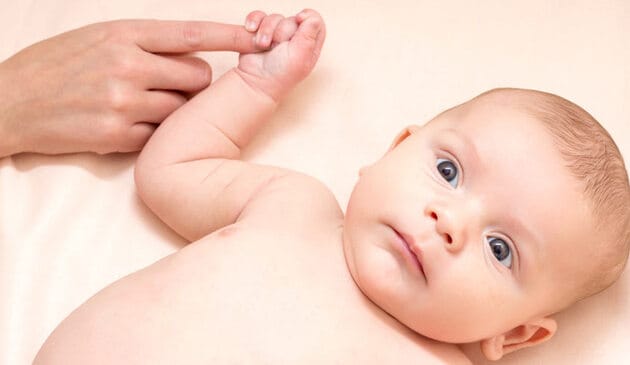 The main headlines this week are that this marks the second 'wonder week' when her brain starts to process patterns – and that her first set of vaccinations are due. All this change means she is easily overwhelmed so keep an eye out for the signs of it all becoming a bit much and build some 'quiet time' into your week.

What is a baby's routine like at eight weeks old?

You're on the cusp of things really falling into place now with feeds and naps getting longer, as well as the gaps in between them. Amen to that. That longer night-time sleep of up to six hours gives her whole day a bit more structure: naps are longer and more predictable, so she will be more alert for play sessions and feeds in between times. You'll likely have a much clearer idea of when your baby will want naps and feeds, which makes it easier to get out and about and to have visitors over at convenient times.

How much should an eight-week-old sleep?

Babies of this age sleep around 11-15 hours a day with at least one long stretch of five or six hours at night time. With a growth spurt and a wonder week on the agenda this week, she'll need all the shut-eye she can get, and plenty of relaxed, quiet time, so if she seems more tired than usual this week, just go with the flow.

You might like to start putting her down in her cot to settle herself, rather than rocking her to sleep, this week, so she can begin to learn to self-settle. Sometimes this is hampered by the fact that the discovery of her feet means she kicks herself awake again, so you could try using a baby sleeping bag instead of blankets, as this will slightly restrict her movement and help her feel cosy and secure in bed.

How much should my eight-week-old baby be feeding?

She's probably having around six feeds in 24 hours now, so that's roughly a feed every four hours, but with a longer break overnight and maybe a cluster feed in the early evening.

If you're breastfeeding, now your milk supply has settled down it can sometimes feel as though there isn't enough there. Don't worry – there really is. If you're concerned, check that your baby is having at least six wet nappies a day, or look at her weight gain. If she's gaining between 150 and 200g a week, she's definitely getting enough to eat. There's often another growth spurt this week so if she seems hungry it may well be that, rather than a problem with her getting enough milk.

Your two-month-old (suddenly sounds so OLD, doesn't it?) has gained two or three pounds since birth and is a good couple of inches bigger than she was, too. Her face is becoming recognisably her own now, with fat pads plumping out her cheeks, making them ever so squeezable.

Around this time her back fontanelles (the soft parts on her head) start to close up. They've been 'open' since before birth to allow her to squeeze down the birth canal more easily. Her front fontanelles don't close and harden until around 12 to 18 months. Indeed, it's all change up there on her head this week. Babies born with lots of hair may start to lose some around now – don't panic it's completely normal. You often find that a patch at the back rubs away where they lie on it, giving them the amusing look of a monk. It grows back pretty quickly, don't worry. And if your baby was born bald as a coot they may be growing more of a thatch now.

With yet another growth spurt this week it will feel like your baby is getting bigger in front of your very eyes. Some mornings you'll get her out of her Moses basket and swear she's bigger than she was the night before – and you're probably right!

How much can my baby see at eight weeks old?

Her vision is much clearer by eight weeks and her eyes are stronger so she is able to focus on objects more easily. From this week, she will start to move her eyes without turning her head at the same time, another sign that her eyes are getting stronger. If your baby was born with blue eyes, you may even notice around now that her eye colour starts to change to what will be her natural colour.

This is a big week for your baby's growing brain. The wonder week that coincides with week eight is all about discovering pattern. It means her brain can process visual patterns, so you'll see her staring intently at floor tiles, wallpaper and anything with a distinctive shape. But it also applies to patterns in sound, so her brain is beginning to recognise rhyme and rhythm. Don't get too excited – she’s not going to start reciting poetry any time soon, but you might notice her 'tune in' to the sound of the oven alarm, or the clicking of the car indicators.

This is also the point at which voluntary movement starts to overtake reflexes. So while she is losing her grasp reflex, she will soon be able to voluntarily grab something and hold onto it tight. Probably your hair, for starters… Ouch.

It's likely your baby has been smiling for a week or two, though some babies make you hold out for another month until they first give you a grin, but many babies are smiling more and more by eight weeks and there are very distinct 'ranks' of smile, too, with her noticeably smiling wider and longer at people she knows best.

Why is my eight-week-old baby crying?

In the early days, I found that after upping my son's feeds he was a lot more settled and happy. I also found that swaddling worked well.

Assuming you've eliminated all the usual culprits and she's not hungry or due a nap, at eight weeks crying can often be due to simply being overwrought. Physical and mental development is so fast this week – it's the equivalent of you growing several inches and learning three new languages overnight. You start to understand why she's in tears.

It's a good idea to have plenty of quiet time this week and try a white noise app to calm her if all the sights and sounds of the world are becoming a bit much.

It's also worth remembering that the eight-week jabs can unsettle a baby very easily and make her feel a bit off colour. She should feel better in a day or two but if you've any concerns at all, just give your GP a ring.

Now she's starting to recognise patterns, it's a good time to crack out the board books. Ones with lots of high contrast and shapes are great and within a few weeks, she'll be able to hold and explore them for herself.

Rhymes and songs start to come into their own, too. If you can develop a small repertoire you'll find it comes into its own at changing time to distract her from sticking her hand in the nappy cream pot or flailing about crying.

Tummy time is also increasingly important as her chest and shoulder muscles get stronger, helping her to hold up her head for longer.

Processing patterns is the main thing she's up to this week and this, combined with a growth spurt and first vaccinations, can make week eight quite the rollercoaster ride. Hold onto your hat and remember that next week things should be quieter and calmer for you both.

Her motor skills come on apace this week, and she'll be trying out her grabbing, kicking and punching as she lies on her playmat. Most babies won't yet be rolling but she will be practising using the muscles she will need to roll and no one wants to be the mum whose advanced baby rolled off the changing mat, so don't leave her alone on any raised surfaces.

Saliva glands develop around now, so get ready with the muslins as your baby starts dribbling like Lionel Messi. And 'messy' really is the word.

Your life with an eight-week-old baby

Lots of mums find the eight-week vaccinations hard to cope with. You've just spent two months gently and tenderly caring for your baby, and then a doctor comes along and pokes them with a sharp needle – that you know has diseases in! It's hardly any wonder that while your brain is telling you these jabs may save your child's life, your heart wants to run away and hide and take your baby with you. Take a deep breath. Remind yourself that everyone feels like this and if you have a cry in the GP's surgery you won't be the first. You probably won't even be the first that morning. And remember this moment so you can look back on it and laugh at your own folly when you're bribing your pre-schooler with chocolate buttons to have her pre-school booster years from now.

If you really can't face it, take your partner or a friend with you so they can hold your baby and be the bad guy instead when she looks up at their face with tears in her eyes after the first jab. But remember, whatever baleful look your baby gives you as the needle goes in, she absolutely will not remember this. Yes, we know YOU will. Honestly, it will all be fine.

What vaccinations does a baby have at eight weeks?

At this first vaccination appointment your baby will be given three vaccinations: the pneumococcal vaccination, which helps guard against the bacteria that can cause meningitis and septicaemia, as well as an oral vaccine for rotavirus, which can cause diarrhoea and vomiting, and also the first dose of their 5-in-1 vaccine. This protects them against:

You might find your baby is a bit unsettled or has a mild temperature later that day. This is reasonably common, though most babies are fine and it's nothing to worry about. The practice staff will give you lots of information on any symptoms to look out for and if you're at all concerned, just give them a call so they can set your mind at rest.

"She's only tiny, and her patterns will change frequently over the coming weeks. There is little you can actually do to make her change."

"My second daughter changed a lot around eight weeks in terms of sleep, and also crying more than she had before (she was super-mellow for the first few weeks)."

"A good rule of thumb with all children is to assume they won't sleep, at all, ever, and then any sleep they do get will come as a pleasant surprise."

"It won't be long before your baby starts being more responsive to you – babbling and smiling a lot. So hang in there, and it will get better."