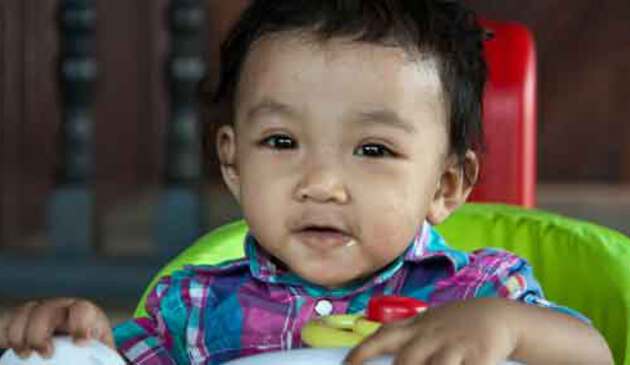 The biggest leap she makes this month is in mobility. If she's already crawling, she will get pretty adept at it this month, covering ground with alarming speed. If she isn't crawling yet, don't worry. Many babies happily sit still for months to come and there's a massive window for what's 'normal'. Now's the time to look again around your home and ensure everything is baby-proofed.

She might be pulling herself up to a standing position from sitting down and even starting to 'cruise' around the sofas, taking sideways steps.

Her sight is as good as an adult's now and if she sees something or someone familiar across a room, she may well take off on hands and knees to get them. Her short-range sight is still better than her long-range sight, but that's pretty much the way things will remain from now on.

How can I encourage my eight-month-old's physical development?

This is the time when your baby starts having a few bumps and falls as she starts to pull herself to a standing position, and as she gets better at crawling, she'll be off and going everywhere she shouldn't be as soon as your back is turned. It's worth spending a couple of hours going round your house on your hands and knees at her level, checking for potential hazards and making sure there is nothing she can hurt herself on, should she reach into a cupboard or stand up and take a tumble.

Having said that, try not to be there to catch her absolutely every time she falls. The odd sudden fall onto her bottom will do her no harm (those nappies are pretty padded) and the occasional minor fall is how she will learn to balance.

When weaning, even if you're doing purees rather than baby-led weaning, try to give her a few finger foods, like rice cakes and raisins, to help her develop her pincer grip.

Around the age of eight months your baby is starting to develop empathy, one of the attributes that makes us truly human. But it's a tricky thing to take on board and in many ways the world was an easier place for her to navigate when she only had to care about her needs, rather than the needs and feelings of others, too. One of the first signs of her developing empathy is what's called 'reflexive crying', when she sees another baby crying and starts to cry herself. If you're having an antenatal group meet-up with several babies the same age, it can often end in what looks like mass baby hysteria at this age.

As she generally becomes more aware of the world around her, she notices that when you are not right in front of her eyes, you do still exist. And that's quite an upsetting revelation for an eight-month-old. Why on earth would you still be going about your business, but not with her, after all? (Babies don't really understand 'me-time' yet).

This is where separation anxiety begins, and around this age you may notice that she cries when you leave her with someone else, whether that's grandparents, at nursery teacher or just a friend. Occasionally she'll even do it to your partner, which is always confidence-boosting for everyone.

Sadly, there's no explaining to her that you're really not partying it up by yourself but are in fact off to have a filling at the dentist and frantically dash round Sainsbury's. So the best course of action is to be bright and breezy. Kiss her goodbye, reassure her you'll be back soon and then go. Even if it's her first day at nursery and you are dying inside, do not cry in front of her (wait until you get on the bus where other passengers can stare at you with a mixture of fear and pity). There's no magic cure for separation anxiety but eventually she will work out that you do always come back and that there are lots of fun things to get on with without you, too.

You may find bedtimes get tricky for the same reason around the eight-month mark. Again, be firm but kind. A bedtime routine will help her to anticipate what's coming next and feel less at sea, so do bath, story, quick cuddle, then tell her you'll be back soon and leave. If you're having real trouble with nights, you might want to look into a sleep training plan, of which there are many. 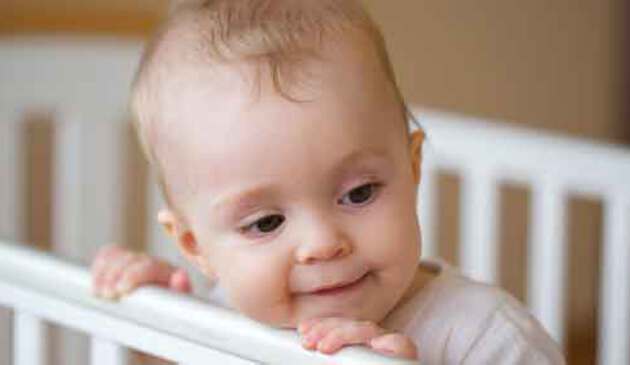 How can I encourage my eight-month-old's brain development?

Help her to understand the relationships between objects of different sizes by showing her how small things can be hidden inside big things – stacking cups are great for this.

While she's learning to assess people's feelings and empathise with them, play at pulling different faces with her – happy faces, sad faces, surprised faces – they'll all make her laugh like a drain and help her to recognise the expressions on other people.

Play games with her that involve things going away and coming back again. It could be hiding a ball under a cup, or a big teddy leaving a teddy with some toys and going out of the room, then coming back to find the baby teddy happily playing and then having a cuddle. Subtle, huh?

Babies at eight months are big on cuddly toys and, as well as enjoying the soft, furry textures on stuffed animals, she might start to indulge in some early role play. You can demonstrate by giving a teddy a cuddle when he's sad or tucking him under a blanket when he's tired. She won't join in much yet but will be taking all of this in. If you're buying stuffed toys always ensure they are safety tested for babies. Dodgy teddies with eyes that fall out and can be swallowed or escaping stuffing are not what you need.

What toys are good for an eight-month-old?

Toys that 'do' stuff, like activity centres, are great for this time, as she learns how to push buttons, bat at dangly toys and shake things that rattle. An activity centre she can 'stand' in, with a seat, is a great buy too. She'll learn to turn around to reach all the different games and activities. Many a mum has sworn by the 'circle of neglect' that allows a baby to happily play while you load the dishwasher or puree (yet) another batch of cauliflower cheese.

Nesting cups are good now, too, as she's working out that small things can go inside big things and that objects can be used to stack up into a tower. Big dolls with bright faces are appealing at this age, too.

Read next: The best toys for eight month old babies

By the time your baby is eight months old she will probably be doing most of the following:

What else happens when my baby is eight months old?

Now is the time to have a really good look around your home for any potential baby dangers. Think about whether you need stair gates, if there are any wires hanging down she could pull on and drag something onto her head, whether the bleach and other poisons are kept high up out of her reach.

Check out any sharp edges she could crack her head on if she has a tumble when pulling herself up to stand and invest in some squashy corner covers for any sharp edges.

If you have older siblings you might need to check that they don't have any toys that are choking hazards within reach. If you're not sure, a good rule of thumb is that if it fits inside the tube of a toilet roll, it's small enough for a baby to choke on.

"If your eight-month-old is not sleeping very long, you'll need to put her down more frequently until the naps get longer."

"With a sidecar cot, you can cuddle in right next to her – giving her loads of contact, snuggles, eye contact, and reassurance. Over time, reduce the physical contact she needs so that she’ll lie in her cot with you lying on the bed next to her."

"Remember that it’s common for them to get frustrated before a big developmental hurdle."

Your baby at seven months old

Your baby at nine months old

Discover the 10 best prams for newborns: find the right pushchair for your baby