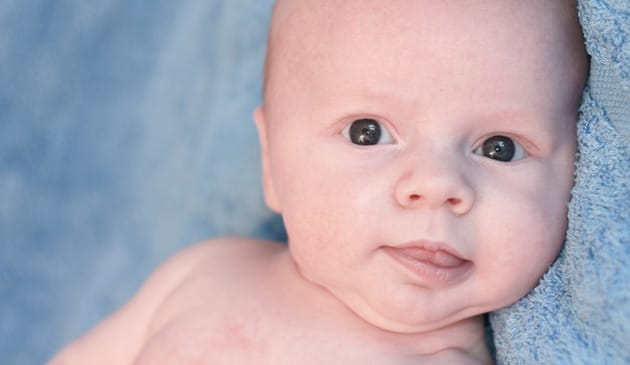 What is a baby's routine like at seven weeks old?

There's much more of a routine at seven weeks. Your baby's day will still be largely made up of feeding and sleeping but she's getting more efficient at both.

Sleep schedule for a seven-week-old baby

By seven weeks your baby may be starting to have longer naps and one longer sleep cycle of around six hours in every 24 hours. With a bit of luck and some gentle encouragement you can get her to do this at night, meaning she could sleep through the night from a dream feed at 11pm or so until morning, with just one wake to feed.

If anyone told you before having a baby that you would look on 'just one' 5am waking in the night as a decent night's sleep you'd have laughed heartily, but it's a start.

How much is a baby feeding and gaining weight at seven weeks old?

Your seven-week-old is much more efficient at feeding now and may be getting through her feeds more quickly, which is good news for you if you feel you've spent the last seven weeks half naked, stuck under a baby on the sofa.

Your milk supply should have settled down and steadied now, though you'll still have ups and downs when your baby goes through a growth spurt.

Your baby will have grown almost two inches and weigh a good pound or two more than she did at birth by now. Friends, family and perfect strangers will probably still be cooing over how tiny she is, as you look down at her surprising heft and feel grateful you don't have to get your cervix round her now she's THAT size.

She's losing her scrunched-up newborn look and is suddenly straighter, longer and perkier than ever before. Her head and neck are more steady than they have been, too, and she may be holding her head up for a few seconds at a time. If she isn't doing this yet, now's a good time to start trying to encourage it with some regular tummy time sessions. Just pop her on a playmat or a blanket a few times a day, just for a few minutes at a time, and try to get her to lift her head by showing her toys or lying down in front of her yourself. If you're concerned about her not lifting her head yet, have a chat with your health visitor who should be able to check her over and put your mind at rest.

Her face is developing nicely and she's starting to have a more distinctive look about her – you may even begin to recognise family resemblances.

How much can my baby see at seven weeks?

She's able to focus much more easily now and can see approximately 60cm in front of her face. She's still learning to track objects, though, so moving a tempting toy slowly from side to side in front of her is a great way to strengthen her eyes and encourage this skill.

Your baby will still prefer high-contrast and geometric patterns, as well as pictures of faces, to anything more complex. The first colours she can easily distinguish will be red, yellow and green, followed not long after by blue, but black-and-white patterns will still attract her attention, too, because they are so easy for her to pick out and focus on.

How much crying is normal at seven weeks old?

This very much depends on the baby, but if you're finding you have more tears than usual at the moment, try not to be too alarmed. Lots of parents find that weeks six and seven seem to bring with them a lot more crying. This might be because they are having a growth spurt and are simply hungrier than usual, or it could be that all the new skills they learn at this stage leave them feeling a bit frazzled. It's also a prime time for colic to show up. If you notice that your baby's bouts of crying are much worse in the early evening and that she's drawing her legs up to her tummy when she cries, colic could be the culprit. To a certain extent, you just have to ride colic out but you can try a few things that might help:

At the same time as she's becoming stronger and more able physically, her brain develops to allow her to coordinate her movements better.

This week you'll notice that her movements start to become less jerky and more 'deliberate'. She's aware not only that her hands and feet are there but that she can actually control what they do, and may reach out to pat you on the face or chest (often more of a wallop than a gentle pat but the intention was there). Glasses, jewellery and tiny fistfuls of hair are fair game, too. She can also open and close her hands and if you put a rattle in her palm, she might be able to grasp it and hold onto it for a few seconds before letting go.

How should I play with my seven-week-old baby?

Make the most of her newfound physical skills and encourage her to move her legs and arms. You can put her on her back on a mat and tickle her feet with a feather or a ribbon to get her kicking, or dangle toys just above her chest to encourage her to reach up and bat at them. Don't forget to keep talking to her as you play, and at tummy time get down on your tummy in front of her so she can see your face and hear your voice close by as she lifts her head.

Good buys around this time are a baby gym, where you might find she happily amuses herself for a short while, kicking and hitting the dangly toys and looking around her, and also small rattles she can grasp easily in her hand.

The main milestone to look out for around this time is reaching out towards objects. She's been grabbing things since she was in the womb, but other than the umbilical cord there wasn't much to grab in there, so this is when she really gets going. Soon you'll have to start tying your hair up and ditching the dangly earrings.

Your life with a seven-week-old baby

By this time, you've hopefully managed to get out and about a bit and catch up with your antenatal class mates, or make some new 'mum' friends. Friends with babies the same age as yours can be a source of brilliant support and friendship at a time when it's easy to feel a bit isolated. Whatever you do though, don't get caught in the trap of comparing your babies' milestones. There's always one whose baby is doing calculus before the rest have managed to roll onto their backs. It all evens out in the end and is not something worth spending any time worrying about.

If you've not met anyone you 'click' with, try the Mumsnet Talk boards.

"7 weeks old is very young for your baby to be in any kind of routine, he is still getting used to being in the world and he will sort himself out (with a bit of nudging from you) fairly soon."

"Get a sling and let the baby be close to you and soon enough they will go longer between feeds."

"Once my daughter started to see properly, smile, and recognise me, that need to be close all the time disappeared."

"Relax, enjoy cuddling and give up trying to do anything else – why do you think it's called a babymoon?"